For those in the know, it is accepted that for anyone over 4ft tall the standard Tiger screen places the rider in a vortex  the force of which will dislodge retinas, deafen lampposts and suck small children in off the street as you ride past. It is indeed a credit to Triumph that they can create a level of atmospheric turmoil that attracts storm chasers in the quiet season.

Anyway, I think you know where I’m going with this; the level of buffeting and wind noise that comes with a stock Triumph Tiger is shocking, literally, and this is another chapter in my quest for the Holy Grail of still, quite air in the saddle of a Hinckley big cat. I say ‘another chapter’ as the first has already been written with the addition of a high touring screen and a Touratec add on (otherwise known as the carbuncle) to my 885 ‘Steamer‘. A visual delight it is not but effective it is.

Having recently bought an 95 reg 955i I discovered that Triumph and their legion of diminutive test riders have again been at work to create one of the most extreme man made environments I’ve ever witnessed from the saddle of a motorbike. At 6ft 2in tall I’d have been more comfortable in the jet stream atop Everest than on the Tiger doing 70mph down the M1.

Having said all that, I like my Tigers, and a quick trawl through Triumph Rider forums led me to discussions about a screen from Palmer Products, a small company based in Essex. Palmer Products is a new motorcycle accessory business run by husband and wife team Iain and Margaret Palmer with the stated aim of ‘offering innovative, high quality, yet cost effective products which are designed to enhance your riding experience as well as help keep your bike in optimum condition’. 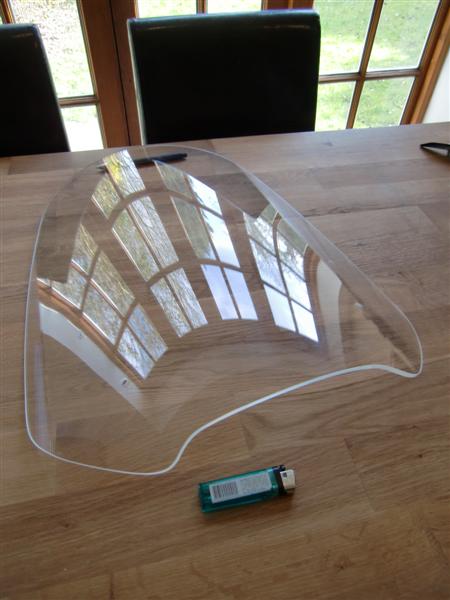 Iain is a mechanical and electrical engineer by trade and Margaret a nurse, though if both had dedicated their lives to fish farming I’d feel they’d be one step ahead of the Triumph aerodynamic team. The site contains a host of their own design products and, rather curiously, a recording of Iain playing drums on a version of ‘Bohemian Like You’, which even more curiously made me feel a lot more relaxed about spending the best part of £200 on a new screen for the 955i.

Iain, presumably, has designed accessories ranging from windscreen systems to hand guards for a number of models and brands including Buell, Triumph, Aprilia and Honda.  There is also a range of ‘universal products’ that can be fitted to most any bike after a bit of aftermarket bending and bodging.

The Palmer Products screen system is basically two adjustable brackets which bolt to the cowl (or cockpit fairing) of your bike and positions the screen ‘off’ the bike.  The brackets allow for multi adjustment in both the hight of the screen and the pitch. The company also offer 3 screen sizes which have been pre-drilled to fit the brackets but they also stress that you can customise your own screen to fit. Anyway, the idea is, once you’ve bolted on the system you fiddle around with the hight and pitch settings on the adjustable brackets to find your own haven of tranquillity….or not. 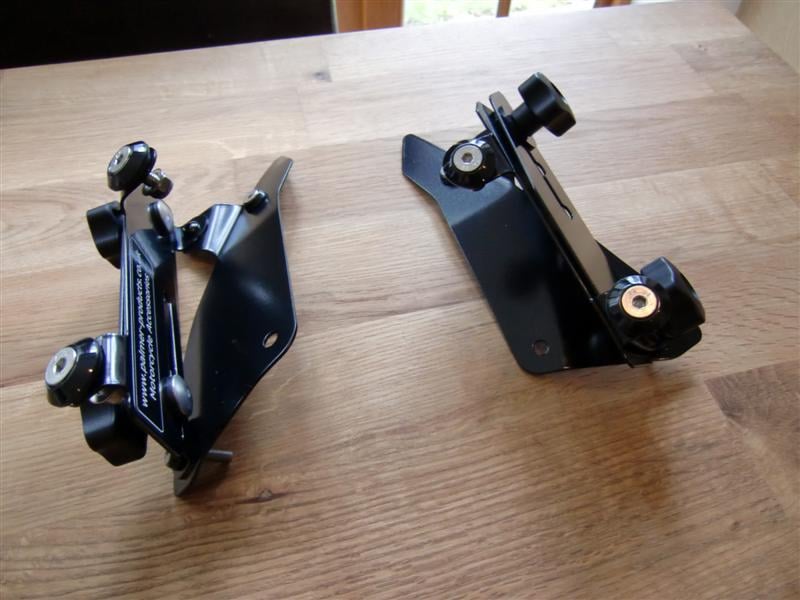 And so to buying

I purchased;
A set of brackets (otherwise known as the adaptor kit) for £75.
Hand adjuster knobs for £10 (makes changing the hight and pitch of the screen a simple 1 minute job)
Large clear screen £90
Screen baffle at £10 (the screen baffle fits between the screen and the bike to plug the airflow channel, which is said to be a good option if riding in cold winter conditions)
Total Price £185

If you can forget the price, buying on the Palmer Products website is stress free and Mr Palmer was quick with a follow up ‘thank you’ mail swiftly followed next day with a note letting me know the products had been dispatched. No complaints there. 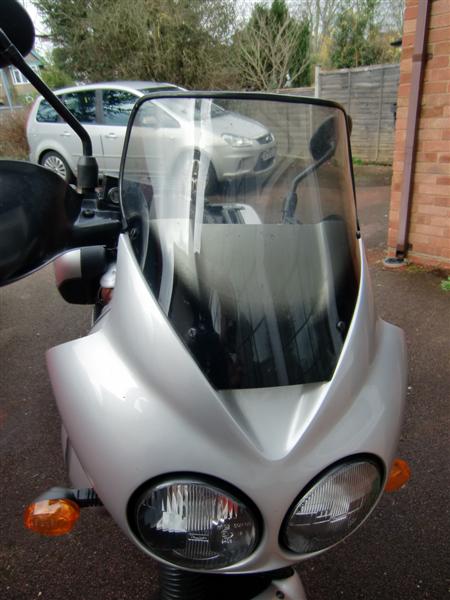 Taking off the Tigers stock screen was a doddle and even for someone who’s been known to spend 6 months over a 2 piece jigsaw puzzle the Palmer Products brackets were bolted on in no time. At this point it would be fair to say that the Palmers have done a great job with these brackets, the quality and customised fit for the 955 are spot on and the fact that they supply all the tools needed (two allen keys and a spanner) was a nice, if unnecessary, touch. Ditto the screen which was on in a flash. If you need it, there is also an online fitting instruction page. 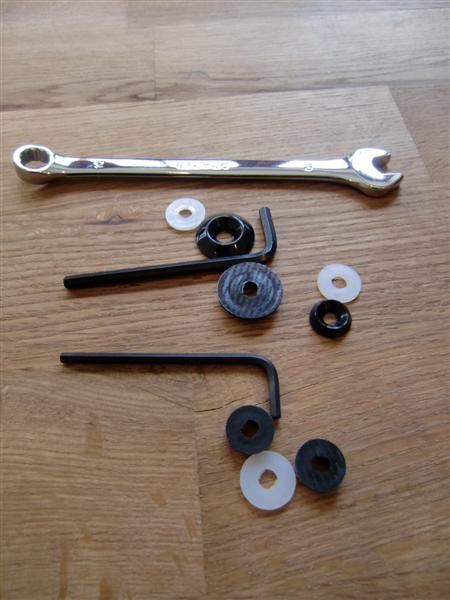 Although I’ve not seen or used the tool adjustable brackets the hand adjustable set (which I bought) are simple and quick to use and re-positioning the screen for height and pitch is done in seconds rather than minutes. 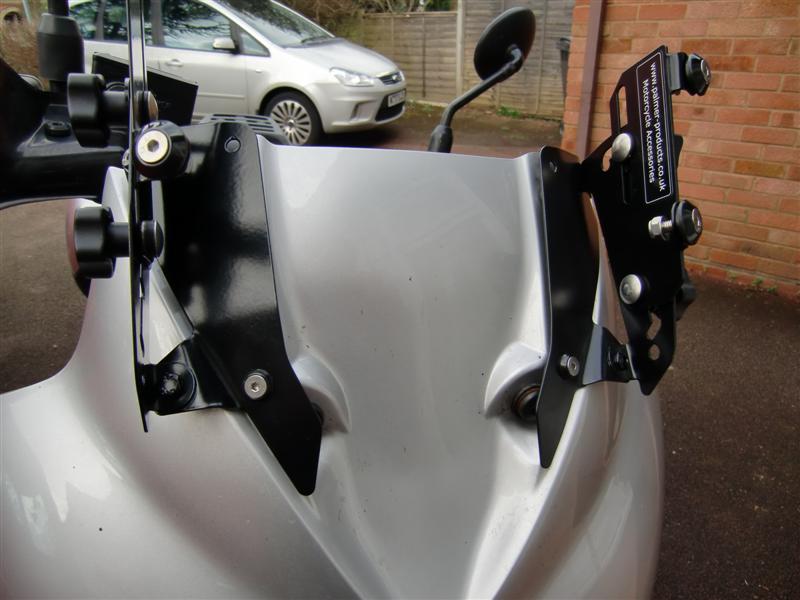 My first test ride was with the screen at full height and with the pitch angle set at maximum confrontation with the elements and the improvement over the stock screen was huge. At 6ft 2in I was just about able to see over the top lip of the screen and there was absolutely nil buffeting around the head at all speeds up to 90mph – I’ve not yet used it above that speed.

But it wasn’t perfect, the wind noise, although subdued from stock, was still loud enough to cause concern and the cowl of the bike flexed a little too much for comfort. I notice that the company make cowl stabilisers for the 1050 Tiger and I’m hoping they’ll do the same for the 955 as I just would not feel comfortable riding at speed over any great distance with the screen at maximum extension. In addition, at maximum reach the screen shook and vibrated so much it was off putting and jarring on the eyes.

However after a bit more fiddling with the adjustment knobs I settled on the middle height setting  coupled with the lowest pitch angle and set off on a 120 mile run down to London and things got a lot better. There was still no buffeting around the head with just a hint of turbulence around the shoulders and the wind noise was much quieter than on the higher settings, plus there was little to no flexing of the cowl. With a set of earplugs I was comfortable enough with this setting that I didn’t bother trying any further adjustment for the ride back. The result was relaxed motorway cruising at speeds of up to 90mph, and that was unthinkable with the stock screen.

I’ll be testing the different settings over the coming weeks plus I’m adding a set of mirror extenders to see if I can reduce wind noise even more. 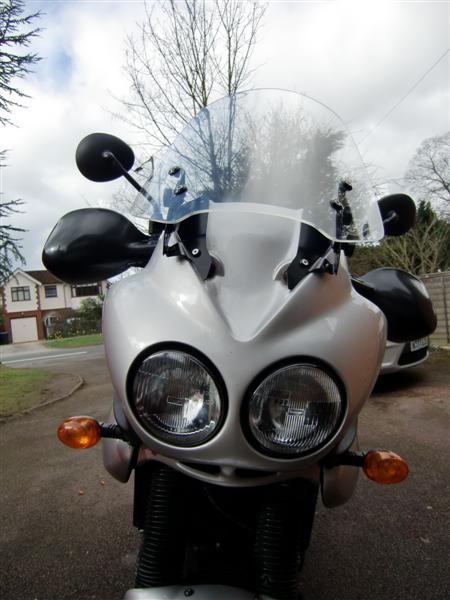 Looks and taste are such a personal matter, for example I know folk who consider Esther Ranson a looker.  That said, in my opinion the Palmer Products screen does not detract from the 955 Tiger and from some angles I even think it adds to the looks. I like it.

Would I buy Again?

No doubt, yes. It’s expensive but the  improvement over the stock screen is massive and I’m now able to look forward to long distance high speed rides and a summer tour of the Alps.

The following list is how the Palmers describe their screen system.

* 9 indexed positions (height & tilt angles) – this allows you to return to a preferred position depending on conditions.

* Forward positioning of the screen – this is the key to optimise screen performance.

* Needs no modifications to the bike.

* Kit comes complete with all hardware and Tools, plus spare sundries.

* Allows easy removal of the screen when necessary.

And here’s a link to the Palmer Products site. 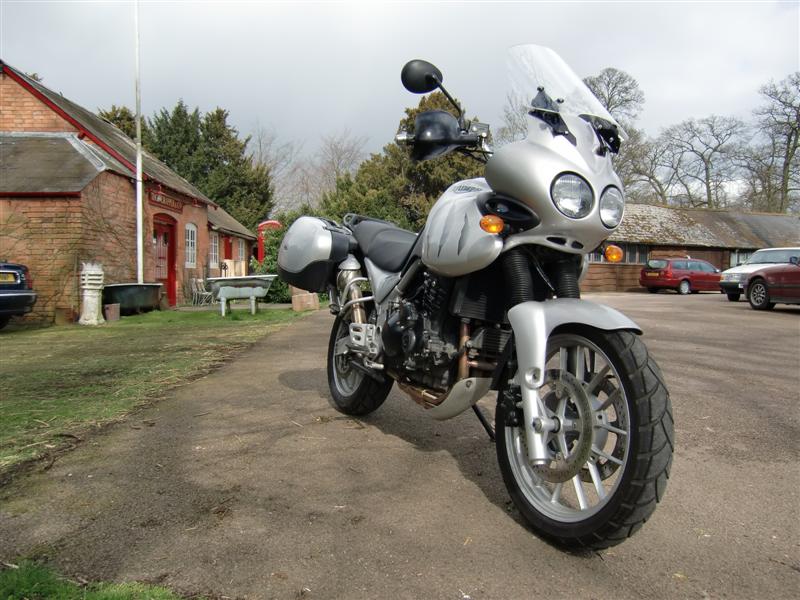