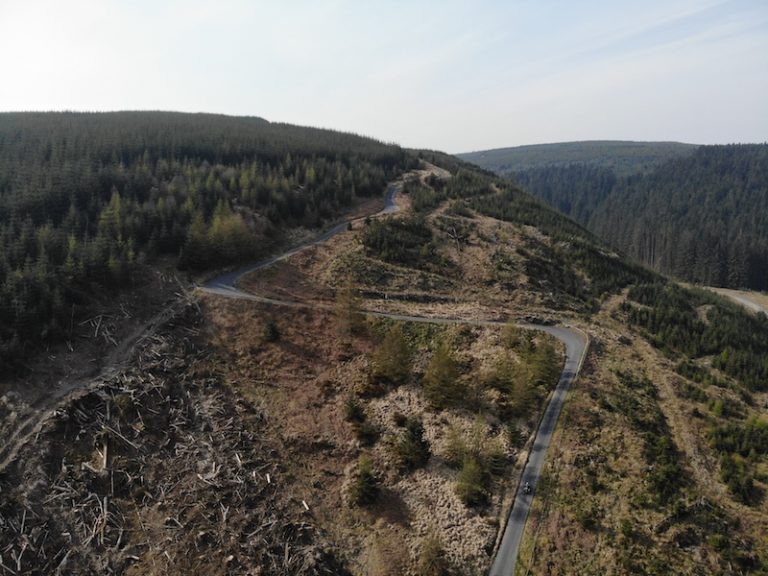 In the third instalment of our Bridgestone Coast to Coast Routes, Bryn Davies details an incredible one-day motorcycle route in Wales, from Golfcliff to Aberystwyth.

We’ve been working with Bridgestone to create a series of coast to coast routes throughout the British and Irish Isles. Our first journey took us across Scotland’s Southern Uplands, taking in some of the most picturesque roads and least-populated areas of the UK. Our second route, which started in Dublin, took us across the heart of Ireland before heading north up the spectacular west coast. For our third act, we decided to head to Wales to create a coast to coast ride that’s got the makings of one of the best one-day rides you can do on our shores.

When I set about designing this route, I initially wanted to start on the south coast of Wales and finish on the north, but we’d be venturing into mileage that would take two days to complete. I purposely wanted to keep this one shorter, offering a show-stopper of a ride that anyone with a spare day can do. 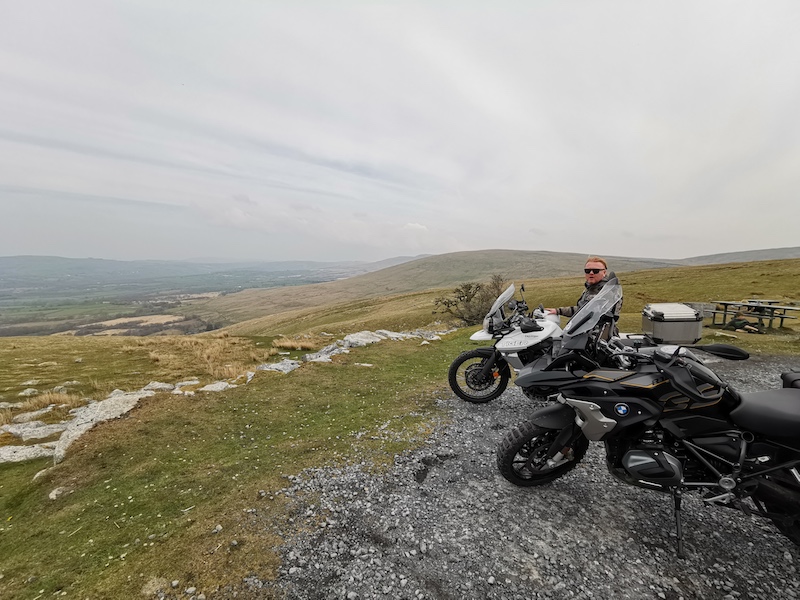 Mid Wales stretching out in front of us.

With that in mind, we kick off in Goldcliff, on Wales’s south coast just a few miles from junction 24 of the M4. From here we ride through the industrial valleys of South Wales before seeking solitude on the incredible mountain roads of the Brecon Beacons and Mid Wales. After 189 miles, you’ll find yourself on the seafront in Aberystwyth, your thirst for adventure quenched and your hunger about to be satisfied by great fish and chips.

Throughout this ride, there are plenty of opportunities to add more miles and green lanes or, if you’re a bit short on time, less miles (head from Manmoel to Ystradgynlais, rather than Manmoel to Brecon). Whatever you do, follow in our tyre tracks to some extent, and you’ll discover just how beautiful Wales can be. 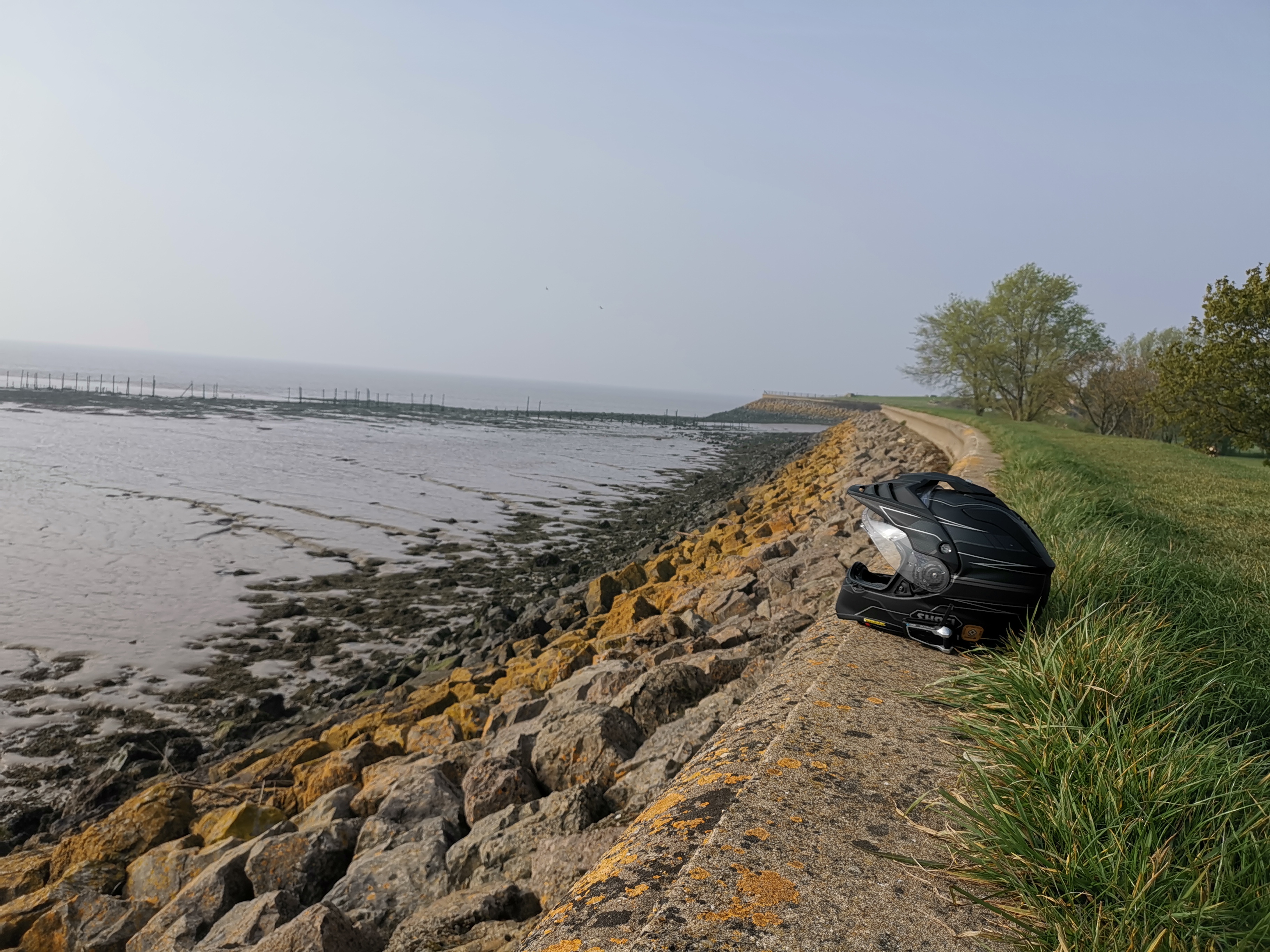 As mentioned, our journey begins on the south coast of Wales, just a few miles south east of Newport in Goldcliff. Head to the bottom of Sea Wall Road where you’ll be able to park just a few metres from the Severn Estuary, a sea wall between your bike and the water. You’ll also find the Seawall Tearooms here, and I’ve been told it’s a great place for a cuppa before you start your day. Unfortunately, at the time of writing this, the tearooms are currently closed due to bereavement. Hopefully they’ll be back open soon.

From Goldcliff, the route will take you along busy roads until you pass under the imposing Celtic Manor Resort and turn right towards Caerleon. As you rise up the hill your surroundings become more green, and it’s worth stopping for a few minutes at the Roman amphitheatre in Caerleon to admire how well preserved it is. Centuries ago, Caerleon was home to a Roman fortress and baths, and the amphitheatre would have been the centre of entertainment. 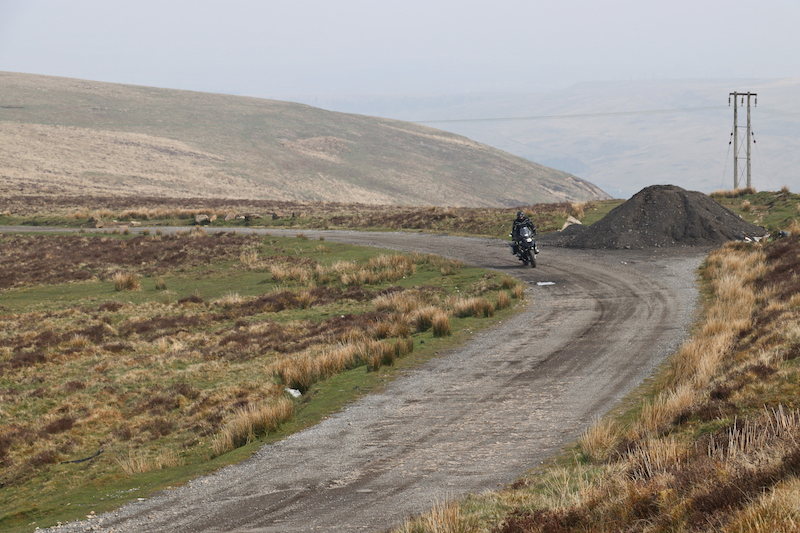 Enjoying the gravel of Manmoel Road

South Wales, between the Brecon Beacons and the south coast of the country, is densely populated, so you’ll have to put up a bit of traffic until you reach Manmoel Road, but from here on in, things take a turn for the special. Manmoel Road is, on the face of it, a route of little interest to most people. But for adventure bike riders, it’s a wonderful stretch of tarmac and gravel that follows a ridgeline towards the Brecon Beacons.

It’s a shame that the road is often lined with dumped rubbish, but the views to your left and right are spectacular. If you’ve never ridden gravel before, don’t be put off, this road is doable on all bikes, even with road tyres – just take it easy.

After Manmoel Road, we head into the Brecon Beacons National Park where the roads and the views are beautiful. As I hinted at earlier, if you’re looking pushed for time and want a shorter ride, skip out Brecon and head straight to Ystradgynlais, home to Touratech UK, along the Head of the Valleys Road. It’s got a 50mph average speed for its duration, but that’ll take you straight to Black Mountain Road, where you’ll find stunning scenery and an incredible ride. 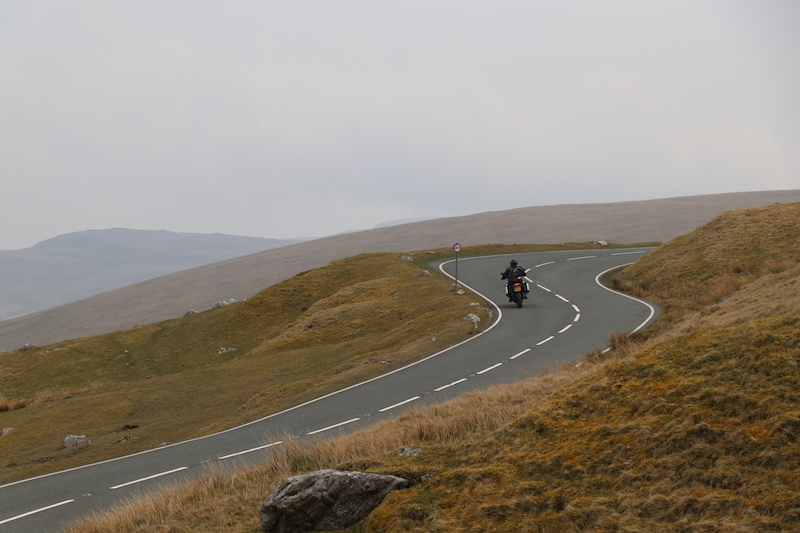 If you carried on to Brecon, the rest of this journey is quite simply superb, and it starts off with a wonderful dip south, down the A4067, before we ride the famous Black Mountain Road. Accessing the Black Mountain Road through Brynamman, you’d be forgiven for thinking you’d taken a wrong turn. There’s very little on the approach through the small village that hints at the wonderful stretch of tarmac to come. A 40mph speed limit is in place for the length of Black Mountain Road, but that does little to take away from the enjoyment.

As you crest the summit of the pass, Mid Wales stretches out in front of you in all of its glory, and you dip down to Trecastle on the northern boundary of the Brecon Beacons National Park. Here, there’s the opportunity to ride an old Roman road in the form of a green lane. It takes you over the summit of Trecastle Mountain, where the keen-eyed might be able to make out the remains of two Roman marching camps (reputed to be some of the best-preserved in Wales).

If you’re keen to hit the dirt, hang a left immediately after joining the A40, down a narrow street, and then left again. You then take the first right and follow that road until the tarmac disappears. In terms of difficulty, you’re going to want to be comfortable with some knee-deep puddles and a few steep descents on rock. Our Bridgestone Battlax Adventurecross AX41 tyres were ideal. Eventually, you’ll come out in Llandovery, where you can join the road route again. Those sticking to tarmac will enjoy a flowing section of the A40 to Llandovery. 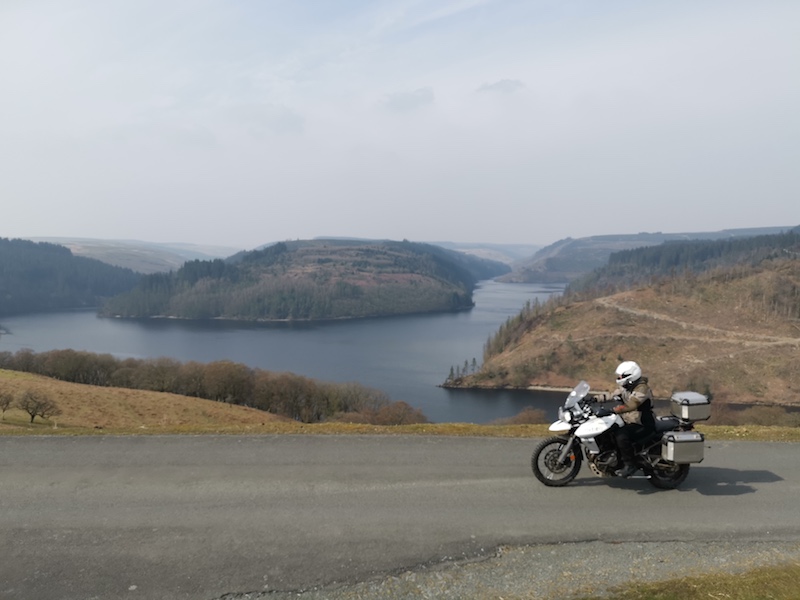 North we go, heading into Mid Wales, and as you ride to Ystradffin, the scenery is lush, green and pretty. Press on and it soon becomes epic as you ascend up a valley wall. The views all around demand your attention and you’ll be more than happy to give it to them. This section of the ride is one of my favourites and it came as a most welcome surprise. As you round bend after bend, the wild and remote shores of Llyn Brianne come into view and the road clings to the side of the flooded valley as it follows the earth’s contours.

I stopped time after time here simply to soak up the magnificence of the scenery we were riding through. Perhaps the best part is that the only traffic we passed was in the form of a few logging vehicles. Once you’ve reached the head of Llyn Brianne, a treat awaits. Round a bend and the Devil’s Staircase, a series of alpine-style switchbacks, sits in front of you while the remote road to Abergwesyn stretches into the distance.

The ride so far has delivered on incredible views and little-travelled roads, but as you turn left out of Beulah and onto the B4358 you’ll hit a rollercoaster of tarmac that allows you to get into a sweeping rhythm. This stretch of B road up to the A470 at Newbridge on Wye is a delight, as is the rest of the ride to Rhayader. 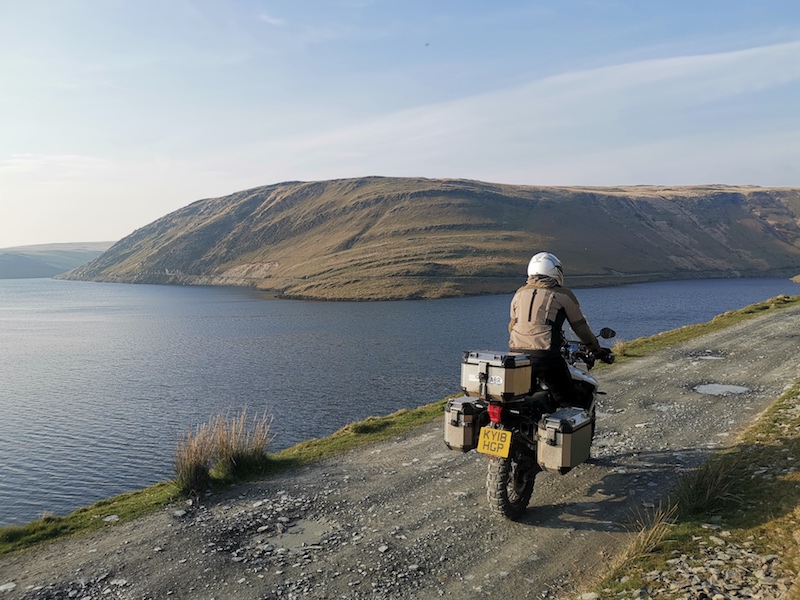 From Rhayader, our route presents you with two options. If you’re sticking exclusively to tarmac, then we head north to Llanidloes and from here ride the magnificent mountain road to Machynlleth before dropping south to Aberystwyth on the A487. If you’re happy riding dirt and gravel roads, then we head into the Elan Valley, where we seek out the Claerwen Reservoir and the incredible gravel road that skirts its beautiful and wild shores.

For me, this track was one of the highlights of the ride – the huge, open expanse of nothing but uninterrupted Welsh mountain scenery (sometimes known as the Welsh desert) is heartbreakingly beautiful. To access the trail, head to the Claerwen Reservoir upper level car park, as you approach it, you’ll see a dirt track dead ahead of you skirting the right-hand side of the water. This is the road to take. For miles you ride along the shores of the stunning reservoir that supplies Birmingham with its water.

Off the beaten path 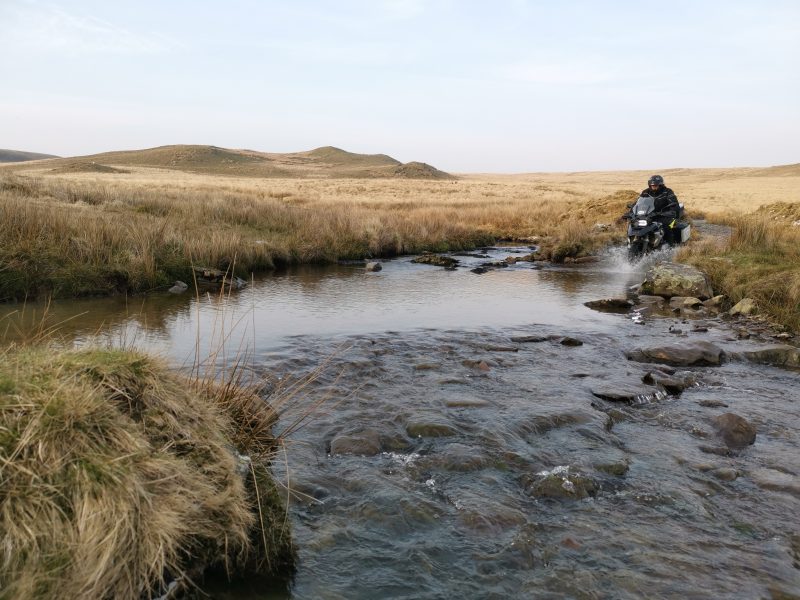 River crossing by the Claerwen reservoir.

There’s nothing tricky about this first section of the trail, save for the steep drop-offs into the water at the side of the gravel road. After a few miles you’ll come to a farmhouse, where the legality of riding on is in question. A sign indicates that the trail ahead is private property, but if the farmer’s about, ask his permission to ride it and he’s usually happy to oblige.

If you do get the go-ahead, you enter the ‘legal’ section of the route again just a few hundred metres down the track. If you don’t you’ll have to retrace your tracks back to Rhayader and follow the road route. A frustrating obstruction to such a beautiful journey. After riding the trail along the side of the Claerwen Reservoir, you’re deposited onto the lonely roads of mid-west Wales, where the scenery is barren, deserted and impressive. Red Kites (the birds), disturbed by the sound of your bike, often take to the sky to show off their impressive size, and the ride from here to Aberystwyth is a beautiful and exciting way to end the day.

The tyres we used 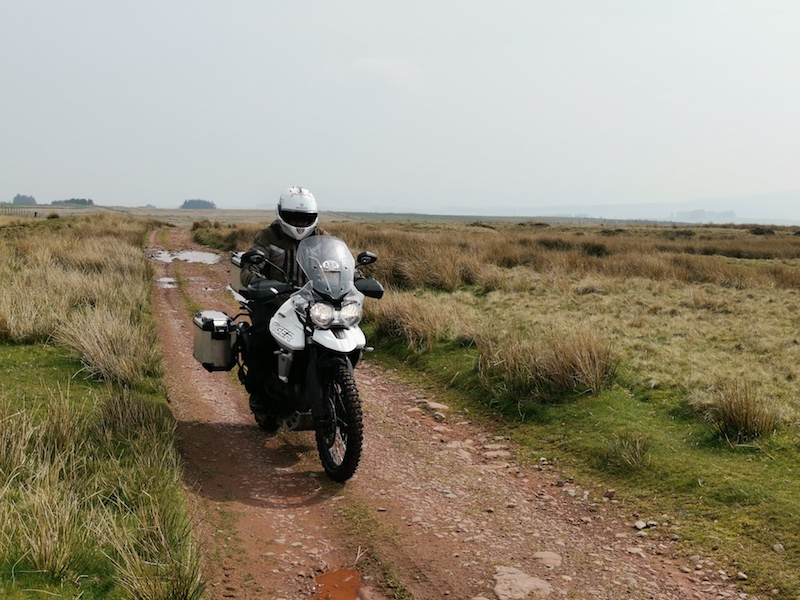 We rode this route on Bridgestone’s new Battlax Adventurecross AX41 tyres. The tyres have been designed to offer a great combination of on and off road performance, and they certainly got their share of both on our Wales Coast to Coast ride. I was pleasantly surprised by just how well the knobblies perform on the tarmac, offering a reassuring amount of grip, and they felt sure-footed on the green lanes as well. We’ve put around 2,000 miles on one set, and they’ve still got a fair amount of life in them! We’ll keep you updated with how well they’ve performed, along with how many miles we got out of them, in the next issue of Adventure Bike Rider. 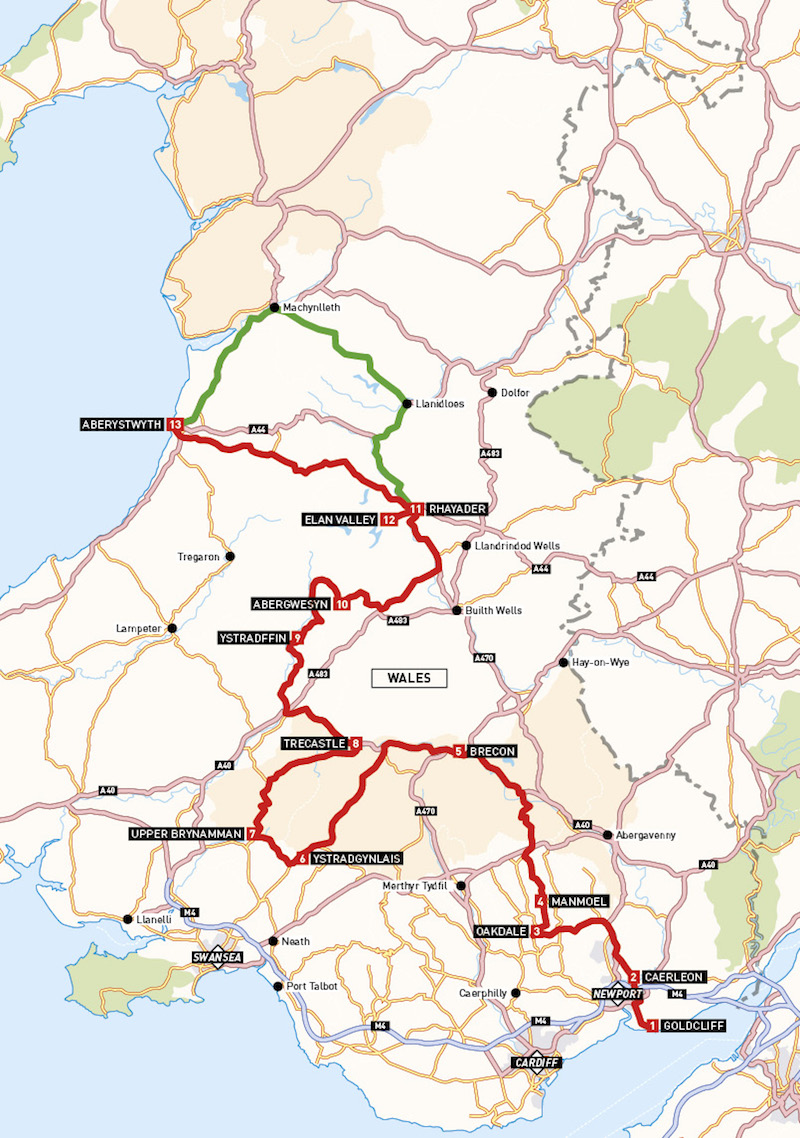 If you’ve got no desire or intention to ride off road, that’s fine! With a few deviations you can still have an incredible ride (marked green on the map). Essentially, follow the waypoints in the box to the left to Rhayader, but rather than heading to the Elan Valley, add: