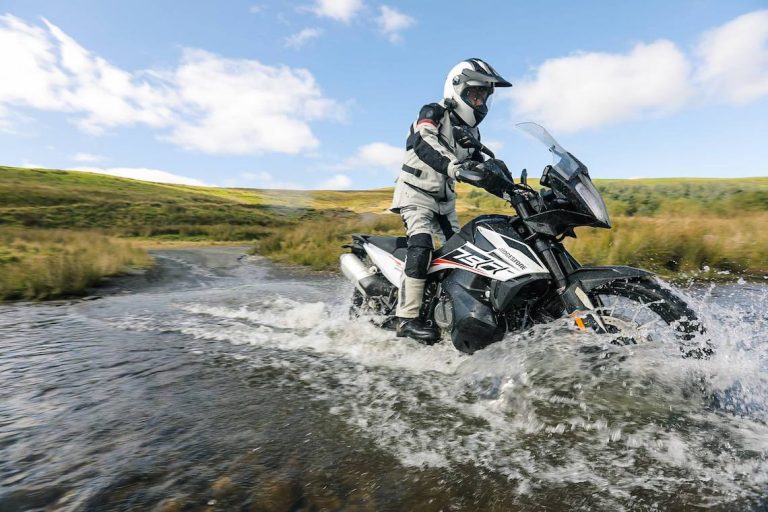 Riding to a network of trails and turning off the road to deal with the challenges of off-road riding, is one of the most enjoyable and rewarding sorts of biking out there. Trouble is, it’s always been a problem choosing the best tyres to suit the diverse requirements of road and off-road riding. 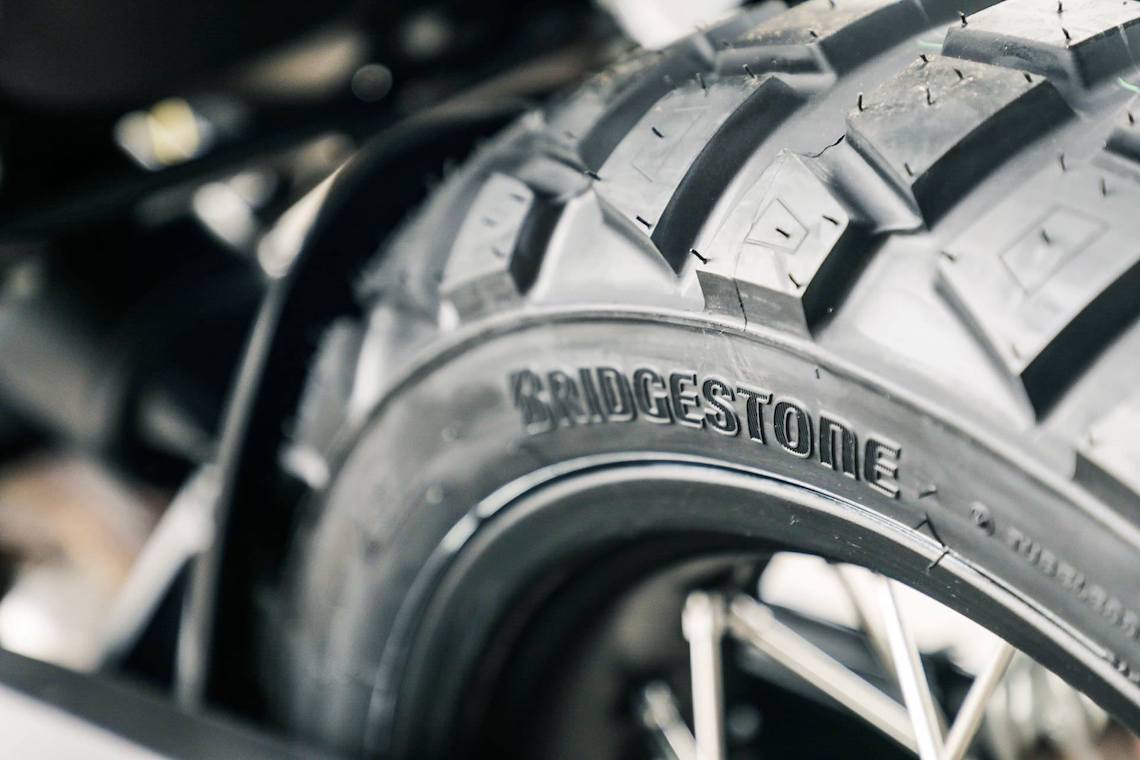 Luckily, Bridgestone has some new dual-purpose rubber to offer a solution. The Japanese firm’s AX41 Battlax Adventurecross tyres, with their off-road biased design have been aimed directly at those wanting a fuller sort of adventure.

As someone who loves such a trip, I was really keen to test the new offerings to see how well they coped. Starting at KTM’s HQ in Silverstone, me and three others jumped aboard the Austrian firm’s 790 and 1290 Adventures and headed off to Wales.

The 150-mile outing would give us a very credible idea of how well the new Bridgestones cope with life on the road. The familiarity of the British routes would prove to be just the job for passing opinion on the tyres’ performance. 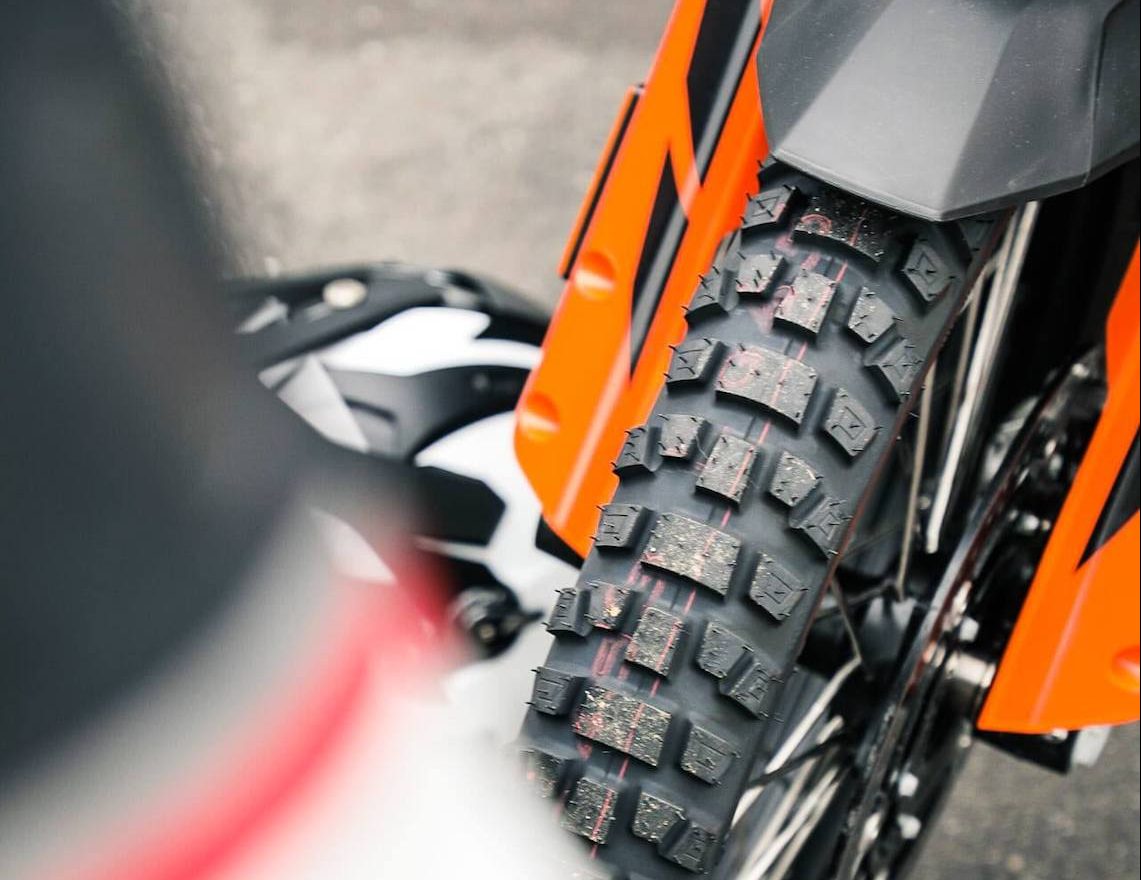 With a few hours subsequently spent sampling off-road routes in the Sweet Lamb Motorsport Complex the next day, followed by a return run to Silverstone, I was confident I’d learn plenty about the tyre’s versatility by the end of the test.

First lesson was how awkward this sort of dual-purpose rubber can feel to begin with. If you’re not used to them, just as I wasn’t when I first tried them a few years back, tyres with the sort of big tread blocks the Bridgestone Battlax Adventurecross AX41 feature move around appreciably enough for you get the idea grip is going to be an issue.

Combined with such a light and sensitive feel they give the bike’s steering, you need to get familiar with them before feeling confident. In my case it only took around 10 miles or so before I learned to trust the particular way the Bridgestones handle. 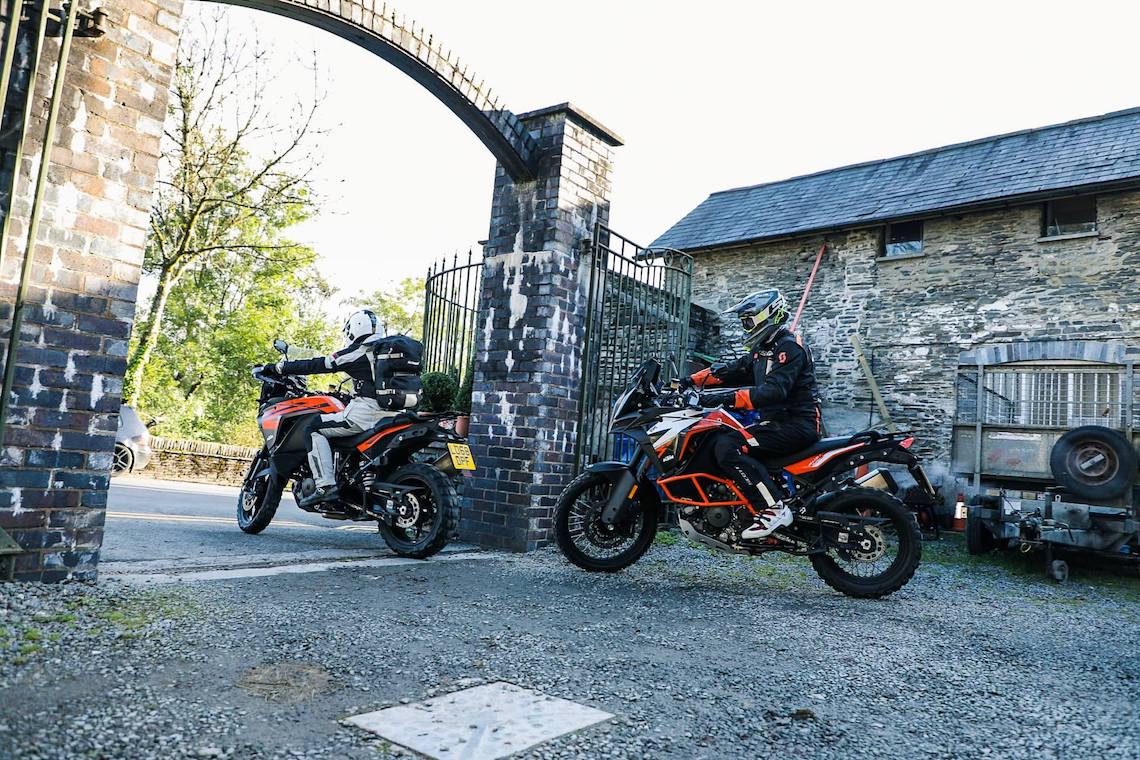 By the time I’d done 30 miles, I was happy to push both the KTMs hard. Of course, they’ll never offer the super planted feel, and ultimate grip of dedicated road tyres. But given they not designed to, that can’t be a criticism.

Mind you, when the roads became wet, more learning was required to understand where the limits lay in those conditions. Thankfully, with the 790 and 1290’s superb cornering ABS and traction control systems acting as a brilliant safety net, the education was safe and swift.

The verdict was quite simple and straightforward; you need to take more care in the rain. In saying that, as long as you don’t push things too hard, and avoid riding too aggressively, then you’ll get all the grip you need. 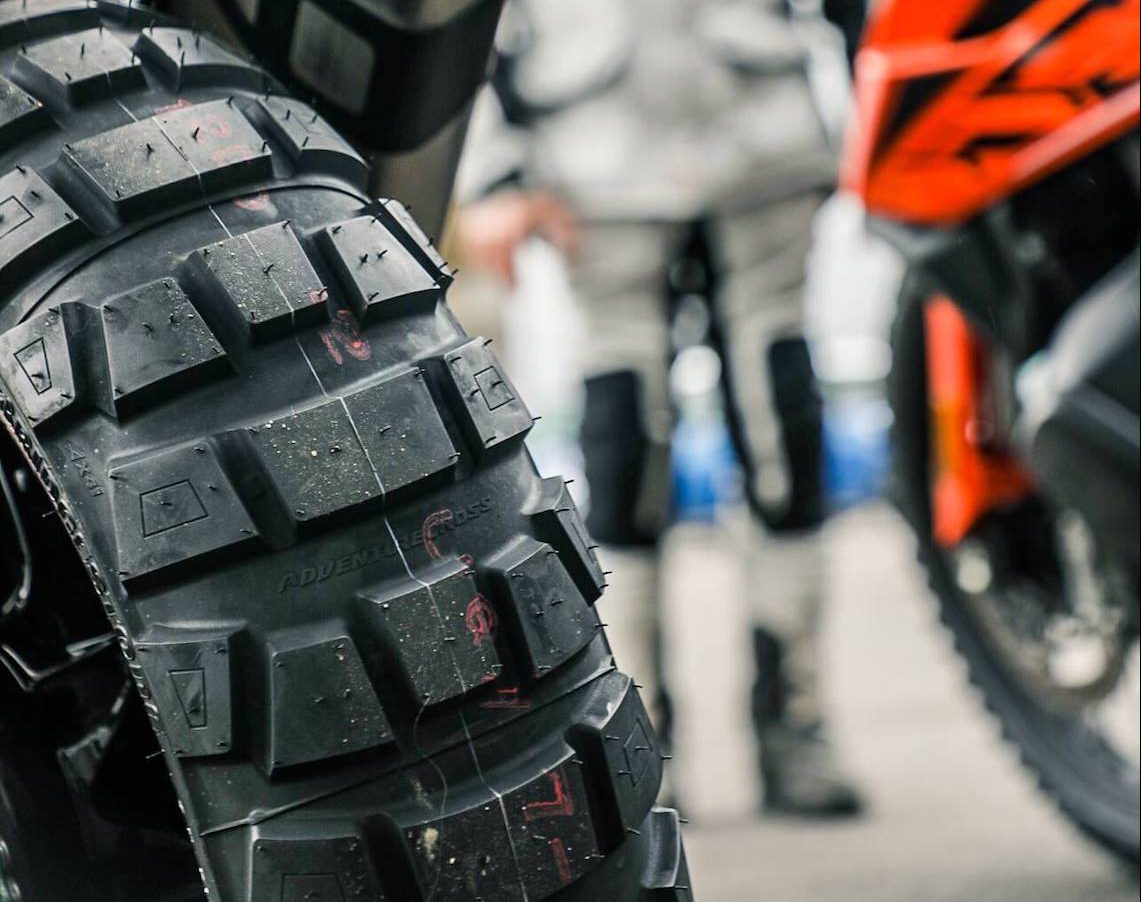 If you spend most of your time riding your adventure bike on the road, then you need more appropriate rubber than these more off-road focused tyres. Mind you, by the time we’d finished the day, I was more than happy to push the KTMs in a very spirited fashion. On dry roads at least.

The off-road bias of the tyres was obvious and welcome when riding at Sweet Lamb the next day. If I’m honest about things, I’ll happily admit I had zero concerns with the way the tyres behaved.

We spent most of our time on gravel roads, though after requesting a chance to try some tougher terrain, discovered the Bridgestones still offer good performance in muddier conditions. 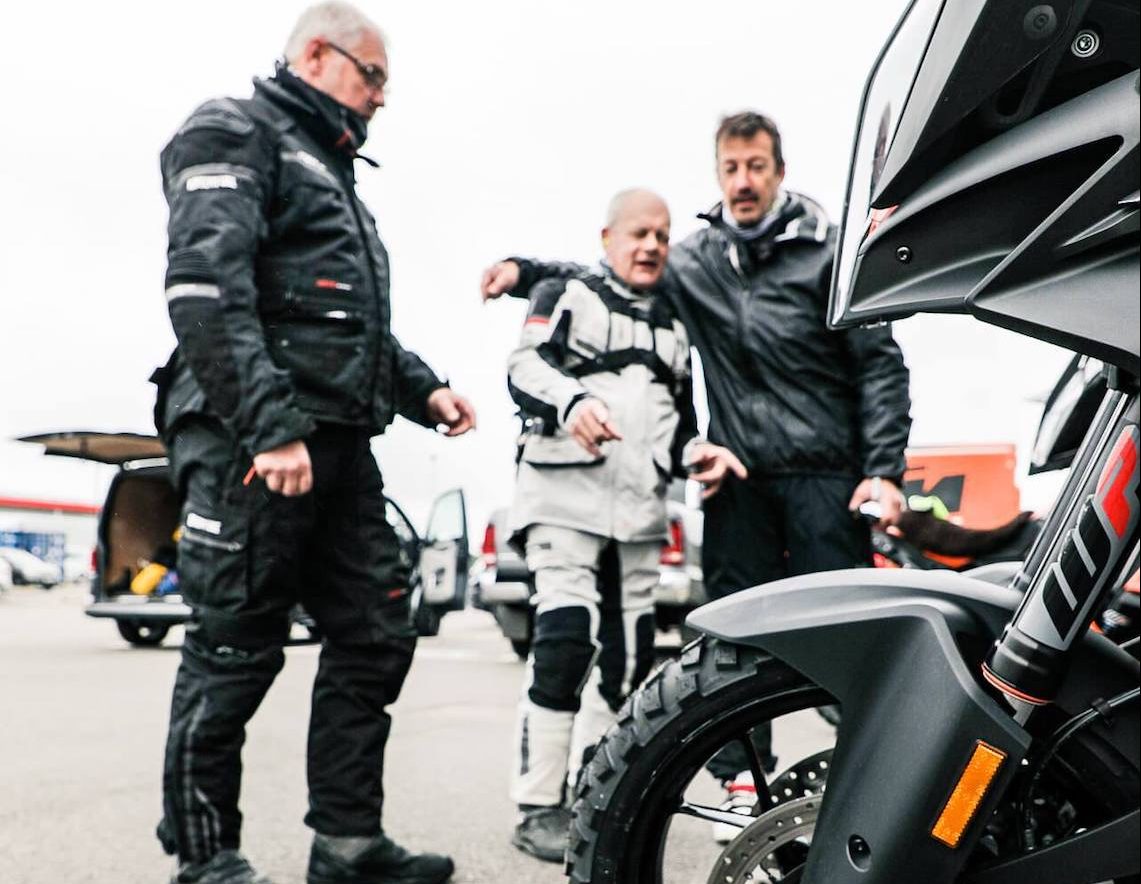 Even so, knowing I’d be riding an AX41-shod KTM 790 Adventure, 790 Adventure R, and Yamaha Tenere 700 on another on/off-road test a week later, I hung on before passing a final judgement.

Faith in the tyres remained just as high on that test’s three bikes, with the very clever electronics on the KTMs letting you take real liberties with the throttle and front brake.

On the dirt, they permitted me to take full advantage of the Bridgestones and make very spirited but safe progress, always staying confident in my welfare. Aboard the less technically advanced Yamaha, I needed to exercise more caution, especially accelerating hard on wet roads, as it isn’t fitted with traction control. Off-road though, I felt more than happy pushing things on the Tenere. 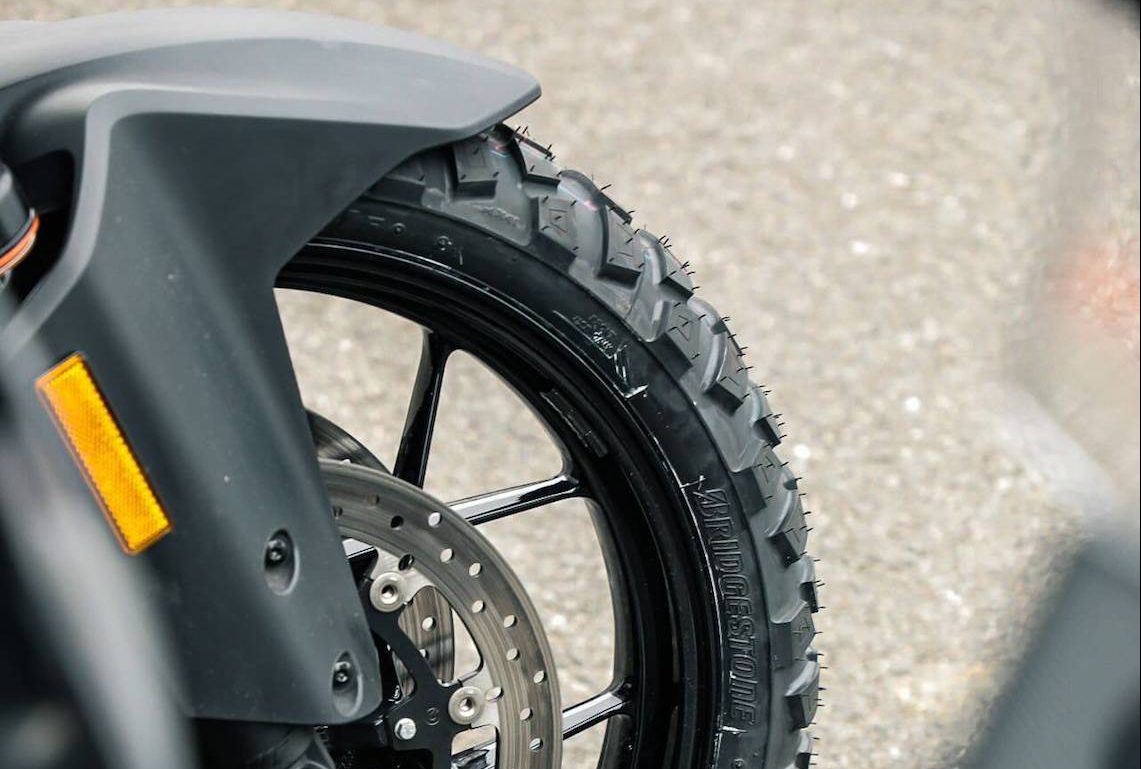 Perhaps the best thing I can say about the AX41s is that for the planned trip I have next year riding down to the French and Italian Alps, then exploring the trails in those mountains, I’d very happily choose the Bridgestones.

It’s a massive ask for any rubber to give a good account of itself on the vastly contrasting demands of road and off-road routes, but the Bridgestone Battlax Adventurecross AX41 does a bloody excellent job. They’re in dealers now in all popular adventure bike sizes. 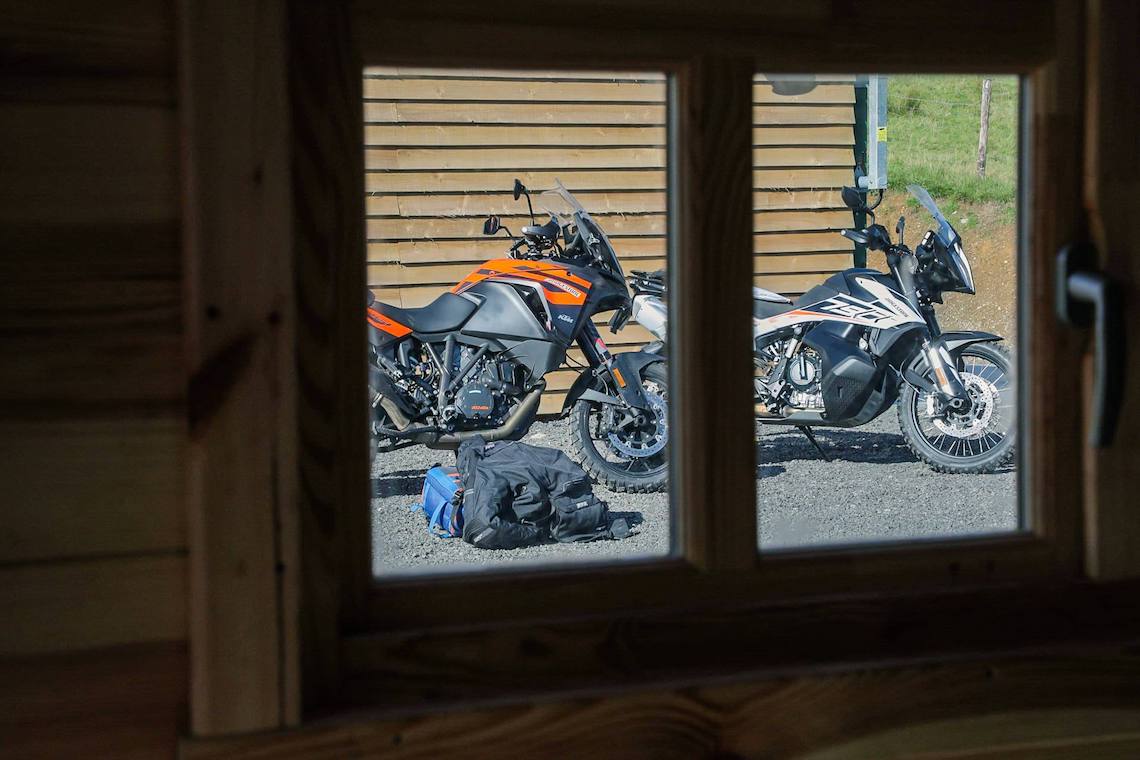 Also present on the AX41 test, was Bridgestone’s Gary Hartshorne, who told us more about the tyres.

“As far as we’re concerned, our tyres have no rivals simply because no one else makes a dual-purpose tyre with the sort of off-road focus ours have. They’ve been made for riders who actually want to take their adventure bikes off-road, not just look as though they’re going to. It’s been a new venture for Bridgestone, as we’ve never made such a tyre before, and the AX41s have taken around three years to fully develop.”