Andy and Emilie recently rode a Royal Enfield motorcycle from Delhi, India to Yangon, Myanmar, passing through Nepal and Bhutan along the way. This made them the first foreigners to cross independently and under their own steam from India into Myanmar in several decades.

The seven week, 6,500 km odyssey took them through high mountains and dense jungle and across some of the dodgiest regions and worst roads that the world has to offer. Having finally made it safe and sound back to Yangon, below they tell us five big lessons that they learned from the trip.

The idea of picking up my old motorcycle in Delhi and riding it through India, Nepal and Bhutan back to our current home in Yangon, Myanmar (or Rangoon, Burma if you prefer) was something I suggested to my girlfriend as a joke one day on the train to Mandalay. But then we started fantasising about just how cool it might be and the image became a little hard to get rid of. So just how crazy an idea was this?

Pretty crazy, as it turned out – first and foremost because the border between India and Myanmar is closed to foreigners. Second, the route would have to pass through some of India’s dodgiest states in the country’s restive northeast. Plus there’s the unpredictable road conditions in the Himalayas, which looked to be some of the most challenging in the world. Then came the innumerable red tape involved in transporting a motorcycle across five international borders. And finally the small matter that it’s actually illegal to ride a bike in Yangon.

It was quite understandable, therefore, that we couldn’t find evidence of any independent travellers who’d driven this route previously. But just the names of the places that the route would take us through – Kathmandu, Sikkim, Bhutan, Nagaland – were enough to convince us that we should give it a shot.  And so it was that a few weeks later we found ourselves on a flight to India, not quite believing what we were about to try and do.

2. The places with the roughest reputations might surprise you 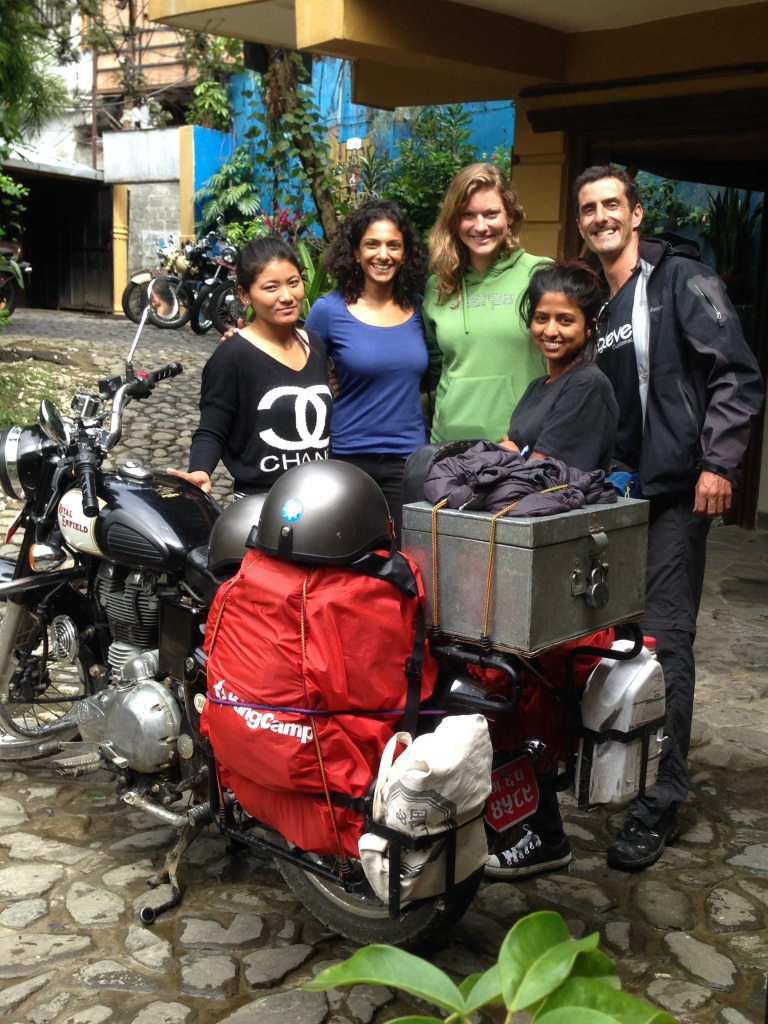 Our route took us through India’s restive north-east, a bunch of states practically cut off from the rest of the country where a smorgasbord of tribes live in remote hills and jungles and bear little or no resemblance to the rest of the nation in terms of language, religion or look. Many wonder how they ever got attached to India and are actively fighting to reverse the situation. This struggle for their own homelands has made Nagaland and Manipur two of India’s most dangerous states. Regular skirmishes between army and rebels, frequent bombings and a general feeling of lawlessness prevail. Criminal gangs allegedly smuggle drugs and guns in from Burma and highway robbery is an all too common occurrence.

As we crossed into Nagaland, bouncing over an old iron bridge and signing in at a rickety military check-post before being allowed to proceed, it was immediately clear that we were entering a different world. There was an instant deterioration of the roads, thatched huts replaced the brick houses of Assam, and military roadblocks and patrols made us feel that we were entering occupied territory. The stunning beauty of the lush green hills swathed in mist could only temporarily divert us from an overall feeling of eeriness and unease due to those tales we’d heard of rebels, drug traffickers and rogue Indian army units that were apparently somewhere out there. 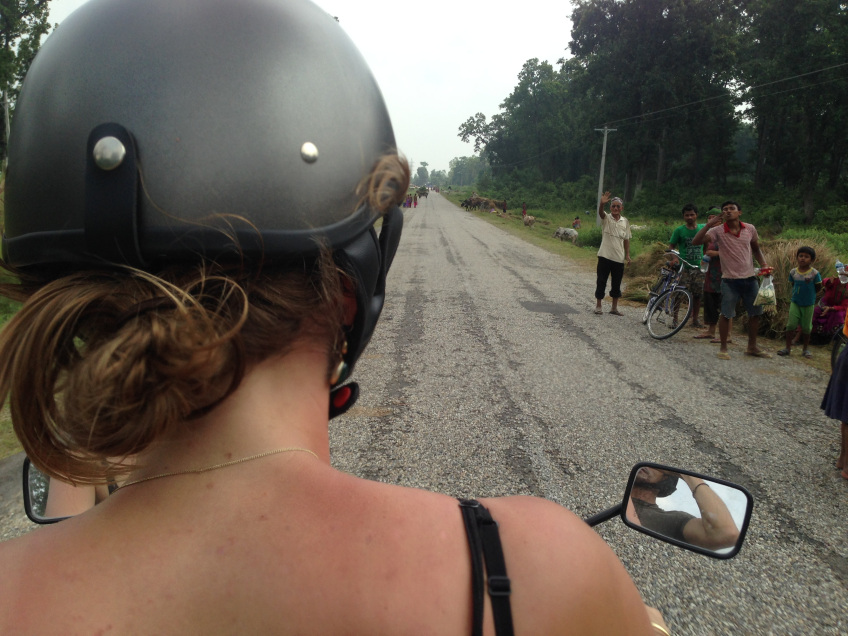 Things were not made easier by the confused, hard stares of the few people we passed, seemingly shocked to see outsiders, and the fact that a lot of the men had locally-made rifles slung casually over their shoulders. First impressions can be deceptive though and in fact the next days brought us into contact with some of the most open, hospitable, and good-humoured people we’d met on our journey. On the way to Kohima, we were treated to the most abysmal jungle “road” of the trip which ended up defeating us but almost immediately we were taken in by an old couple and their daughter in a tiny hilltop village. They dried our clothes around the open fire and insisted on cooking us a hearty meal while urging us to “write a letter to the King of England” once we got home, drawing his attention to the cause of Naga independence.

As we continued on towards Manipur’s state capital of Imphal, which had just been bombed four times in as many weeks, we were suddenly surrounded by the town’s local biker gang, the Royal Riders, who had heard about our trip and ridden out to the city limits to escort us in. They made us feel right at home though our nerves were not completely calmed as it also happened to be Diwali, the Indian Festival of Lights, which involves an all-night blitz of fireworks that left us never quite sure whether the last huge bang was just another Roman candle being let off or rather a home made bomb exploding. 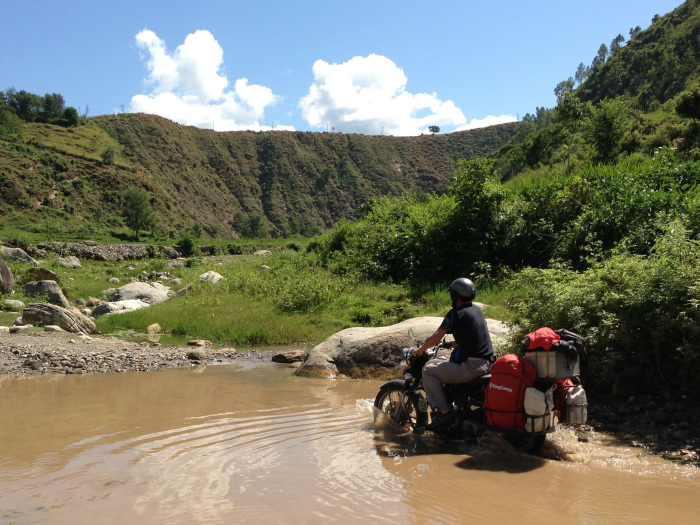 We would never have started the trip if we’d insisted on being sure that it was feasible before setting out. And from day one we realised we needed to throw a lot of the planning that we had done out of the window. It was a great reminder that not all of the knowledge you need is available through Google. The condition of a road, the availability of a mechanic, the temperament of a border guard, the safety of an area, these are all things you only find out by extreme proximity, which means embracing uncertainty but also allows the journey to remain mysterious and to unfurl and evolve each day, with you never quite knowing what’s going to happen next.

Our route was soon out of the window as roads which had been said to exist turned out to be washed away. The timetable also got binned pretty fast as we had failed to anticipate that, for example:

We had lots of good delays too though, such as the irresistible smaller, rougher road that led up to an old monastery and just begged to be explored, that inviting river we were riding alongside in southern Nepal which lured us in for an afternoon dip, and the wonderful people all the way along from Delhi to Rangoon who insisted we sit down and have tea with them while explaining what on earth we thought we were doing. Our conclusion: always allow at least twice the time you think you’ll need!

4. You’re probably worrying about the wrong things before the trip 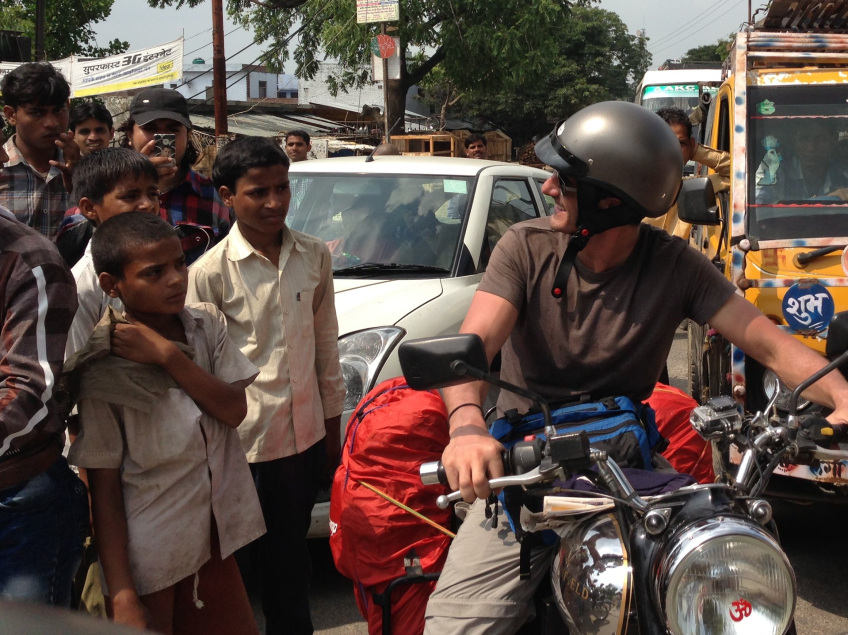 We had sat fretting about getting hijacked and robbed, feeling we’d be sitting ducks as two lone westerners riding through some of the remotest parts of South Asia. As it happened though, never once did we even actually feel genuinely threatened. We worried that the border crossings would involve interminable questions and delays and that we probably had only a 50-50 chance of actually getting through to Myanmar. In reality we were greeted with friendly smiles, a little curiosity, and all-in-all a pretty efficient and fast service and not once were we fingered for a bribe.

What we should have worried about instead was road conditions. Sure we expected lots of potholes, but we were not quite prepared for the extent of knee-deep water-logged mud and roads made entirely out of fist-size loose rocks, the lack of bridges across rivers and the rockfalls that occur in the mountains with surprising frequency. When the road got better we were instead faced with a heady mix of brightly painted trucks, rickety buses, speeding cars and weaving motorcycles to contend with, united in a desire to get wherever they were going as quickly as possible with scant regard for the laws of physics or the basic tenets of road safety. And finally there were the dogs, goats, yaks, pigs, and odd camel who were ever keen to assert their right of way.

5. Visit Bhutan once in your life 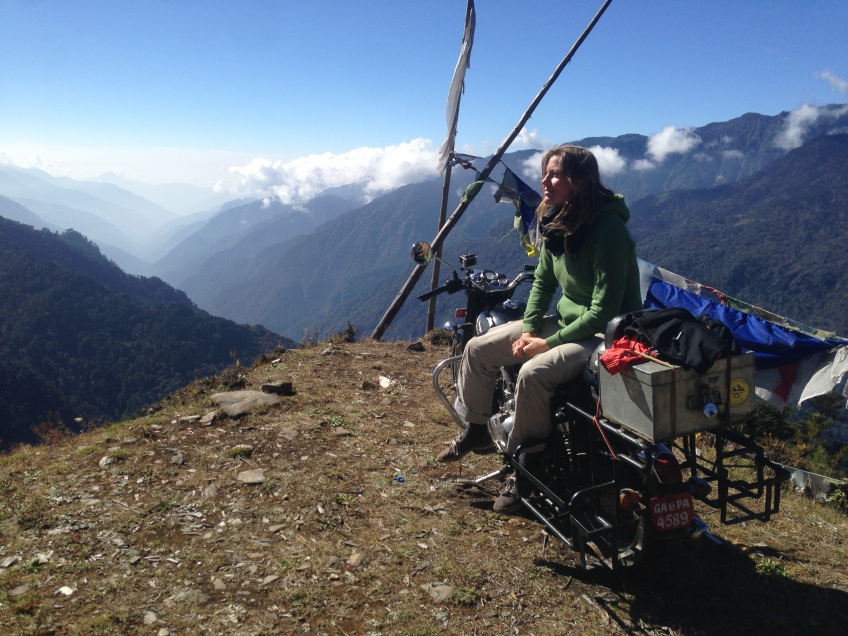 India, Nepal and Myanmar are all wonderful, fascinating, beautiful countries that we can’t recommend highly enough. But our passage through Bhutan was simply magical. The country strictly controls tourism and we had spent several months organising to drive our motorcycle through the country – doing it alone is an absolute no-no as all travellers must be supervised and have their itinerary pre-approved. We were greeted by a tiny Himalayan kingdom of less than a million people sandwiched between China and India.

It’s the home of the concept of Gross National Happiness, a place where no tree can be cut down nor any animal killed, where tobacco is banned, where all buildings are built in the traditional style and decorated with ejaculating phalluses in reverence to a certain “Divine Madman” and where there’s a national park dedicated to the protection of the yeti. We spent ten days or so winding our way through this spectacularly beautiful and pristine wonderland of soaring snow-capped peaks, hidden green valleys and magnificent fortresses and monasteries, topped by colourful prayer flags flapping in the wind. We ended up totally enthralled by the natural splendour, openness of spirit and deep cultural reverence that permeate this land and its people. Go there.

To read more about Andy and Emilie’s trip, take a look at their website: http://www.ridingtorangoon.com