The ABR guide to the highest passes in Wales 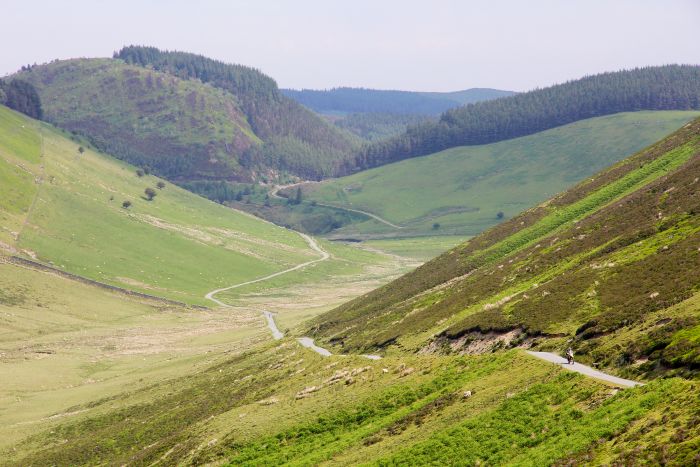 What is it about riding a mountain pass that makes it so enjoyable? Is it the views, the remoteness, the twists and turns, or perhaps the extra challenges they offer? To be honest, it’s probably all of those things plus much more. Riding among the mountains has always been great fun, especially when the road has to contour around the natural obstacles that stand in its way.

Upon completion of the list, we realised that we’d probably created the best motorcycle tour of the British Isles so, to give you a teaser, we wanted to share with you the Welsh section. Without further delay, here are the highest (and most rewarding) passes in Wales.

I’d have bet money on the highest passes in Wales being up north in the Snowdonia National Park but it’s the Black Mountains and Brecon Beacons in South Wales where you’ll find the rarest altitude.

Unfortunately the old Roman Road known as the Gap Road which tops out at 599m between the highest peaks of the Beacons is no longer legal to ride, but the Gospel Pass at the western end of the Black Mountains makes up for the disappointment.

Starting off in Llanvihangel Crucorney, where you’ll find the oldest Inn in Wales, the singletrack road heads north through the beautiful Vale of Ewyas following the Afon Honddu river. This is surely one of the finest stretches of scenic road in the country as you head up the steep sided valley with the road becoming progressively narrower and the hedges higher.

At the midway point you’ll find the ruins of Llanthony Priory where you can stop and take in the history and refreshments at the café. Continuing north from the Priory the road is a treat, if not a little dangerous, with blind singletrack corners where any oncoming traffic is not visible until the last moment and passing places, even for motorcycles, are at a premium. 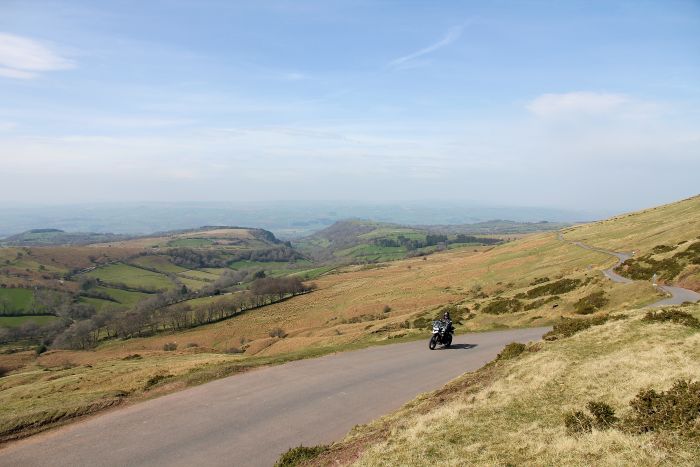 After the small village of Capel-y-Ffin the incline increases and you leave the lower wooded stretches and enter high moorland with the pass in view at the head of the valley. The view from the pass is stunning as it extends into Mid Wales and the Welsh Marches whilst way down in the valley you can pick out the world famous town of Hay-on-Wye.

The run down to Hay-on-Wye is just as entertaining, first traversing the northern flanks of Hay Bluff (677m) where you’ll cross the Offas Dyke Hiking Trail, followed by high moorland with wild ponies grazing at the side of the road. The road then steepens and closes in as it descends and once again care needs to be taken for oncoming traffic.

Hay-on-Wye is famous for book shops and the annual Hay Festival which is one of the top literary festivals in the world. It’s a great place to stop for refreshments and for a mooch around the town discovering all those books you thought you’d never want.

If you’re into off-road riding stay an extra day; The Begwns just to the north of Hay are criss-crossed with green lanes. 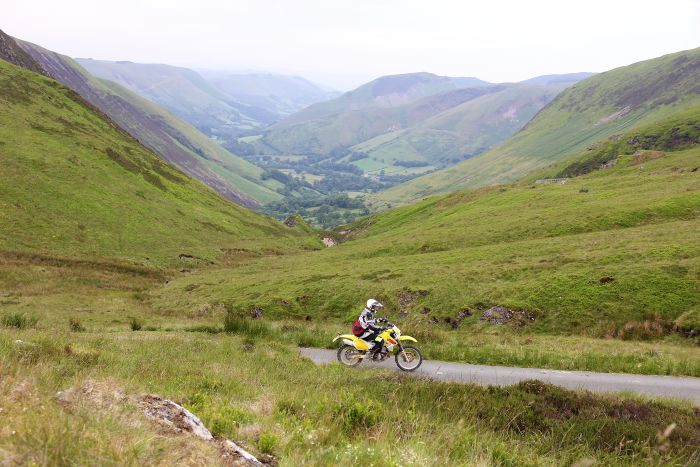 Placing Bala as the start point for the Bwlch-y-Groes Pass means that you can ride up the Cwm Hirnant, one of the best high valley rides in Wales, before dropping down to Lake Vyrnwy and the start of the single track up to Bwlch-y-Groes.

Three roads converge just below the summit of the pass; from Dinas Mawddwy in the south, Llanuwchllyn in the north and the lake road from the west. Whichever road you use you’ll not be disappointed, the steep sided valley scenery is simply stunning in all directions.

Originally a pilgrim route linking north and south west Wales, Bwlch-y-Groes (Pass of the Cross) is also known as Hellfire Pass and was used by both the old Austin Motor Company and motorcycle manufacturers Triumph and BSA as a testing ground for new cars and bikes.

From Lake Vyrnwy the singletrack starts at the westernmost point of the lake, riding up from the Eunant Fawr valley onto moorland where the views open out to include the Afen Dyfi valley and the steep sided scree slopes of Graig y Pant. It’s well worth taking a diversion down the steep road into the valley before heading back up the pass to Llanuwcgllyn. 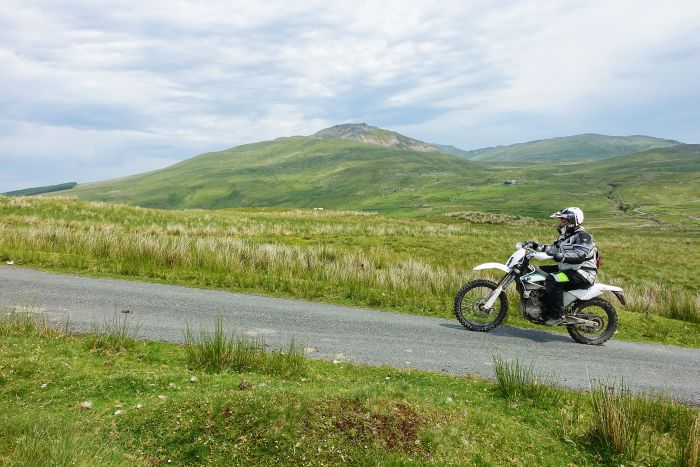 This is a little gem of a road. Having spent the best part of 30 years visiting the Snowdonia National Park as a hiker, mountain biker and motorcycle rider I have to confess that I only discovered the Dol-y-Moch single track pass when researching for this feature. If nothing else this only goes to show there’s so much in our own back yard just waiting to be discovered.

Starting off from Llanuwchllyn, to the south of Lake Bala, a single track road heads up the Afon Lliw valley into what must be one of the least visited parts of the National Park. The road is gated in parts as it rises up to open land and sheep grazing country – keep a careful eye out for the woolybacks, they were in suicide mode when we rode through.

The view to the north is dominated by Arenig Fawr (854m) and Moel Llyfnant (751m) until you reach the high point where the dramatic ridge line of the Rhinogs come into view. The drop down west takes you over the old Roman Road of Sarn Helen and to the mountain bike park at Coed y Brenin, where motorcyclists can take on a few legal green lanes. 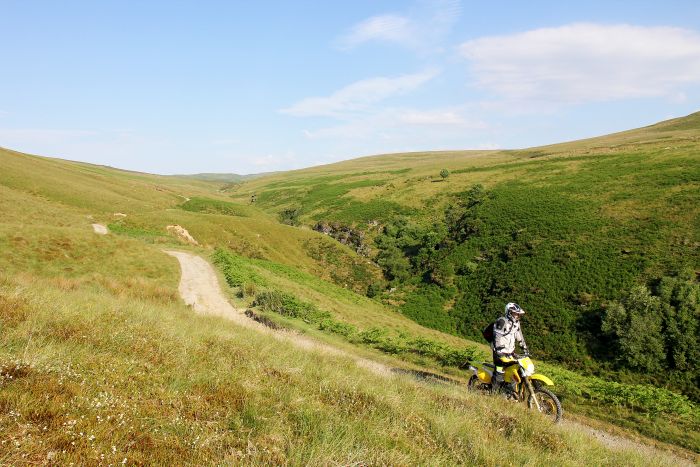 The Wayfarer is an old drovers trail that crosses the Berwyn Mountains in North Wales. The track runs east/west topping out at 580m with glorious views towards the main Snowdonia ranges to the west and the 784m high Cadair Bronwen to the south.

Setting out from Llanarmon Dyffryn Ceiriog in the east, the first few miles are along a single track tarmac lane which runs straight into the Wayfarer trail. On the first section you gain height on rocky but easy ground.

After a couple of miles you cross a small bridge and the route splits with the harder section going right up a short but steep climb followed by a section with deep 4×4 ruts. The left trail has less of an incline and is easier going.

You cross a short boggy section on duck-boards and continue up a rocky climb to the apex of the pass where you’ll find a metal box containing a summit log book.

The descent to the east appears to have been subject to remedial work and after a mile or so the track splits with the most interesting trail heading down and to the left. It drops down over some rocky ground to a stream and then skirts the northern flank of Moel Peace where there can be some deep water splashes. The drop down into Llandrillo is a lovely run but there are a lot of gates. The alternative route to the right is on far easier ground

Be sure to check out the full guide in ABR issue 29 (Jul/Aug) which is available from WHSmiths, independent newsagents and from our online shop.