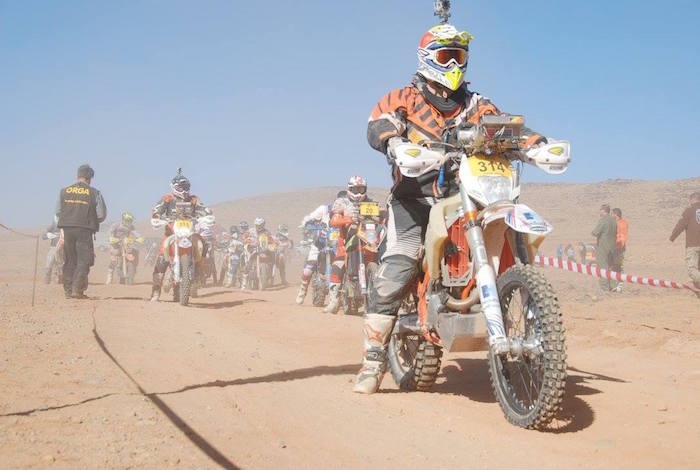 On 6-13th of March 2016, the 18th edition of the Tuareg Rally took place in Morocco. In the rally, motorcyclists contend with over 62 miles of vast sand dunes and are exposed to the beautiful trails that Morocco has to offer. There are two main bike classes in the rally: ‘pro’ and ‘amateur’. ‘Pro’ presents the biggest challenge, though ‘amateur’ is still an incredible feat and both reach close to the same overall stage mileage per day.

This year, accompanied by the Lithuanian rally team Mediafon-Motoshop, I attended the rally as a journalist with a mission. I wanted to show my fellow Lithuanian’s that the infamous Dakar isn’t the only rally in the world.

On the first day, I’m faced with a dilemma. My support team and I decided to take a short ride to take some pictures. However, now they’re nowhere to be seen, my phone isn’t picking up any signal and the power sand I decided to take for a ride is sinking deep into the soft sand. It’s getting dark. In the distance, I see small, whizzing white dots of motorcycle lights – the remaining few in the rally today.

I try accelerating again, but it’s no good. 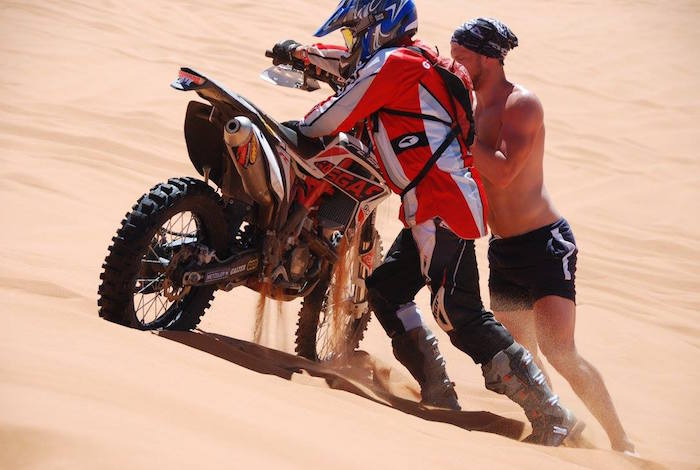 The sand has already swallowed my chain and I dig at it with my hands for a while, despite me knowing perfectly well that it will not help. What else can I do? I straighten my back, exhale deeply and try accelerating one more time.

“Think”, I tell myself. “Remember. You have heard about these situations; you’ve even written about them.”

I lay the bike down. Unexpectedly, it is not as heavy as I’d have thought. I accelerate but nothing happens. Let’s try tilting it onto the other side. In the end, after a few attempts, I finally do it. I’m still absolutely alone, but I’m freed from sand at last. Back on the pedals, I begin gaining speed, and the panic from earlier quickly vanishes. Hurtling on your bike deep in the dunes of Morocco – there’s nothing else like it! 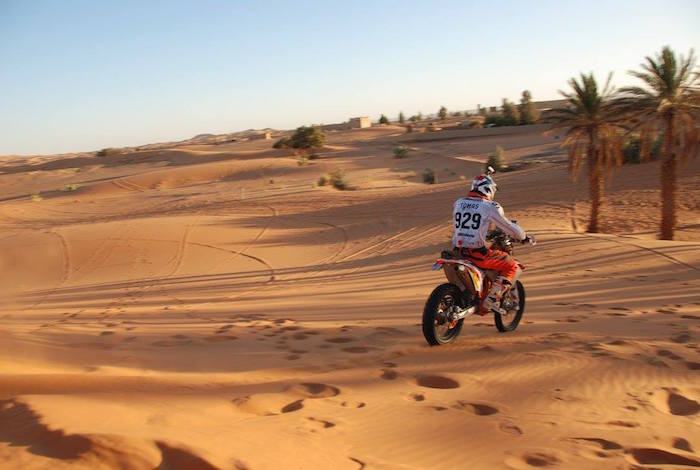 The next few days were spent capturing the racers with my camera – there was lots of great action everywhere. Before this experience, I’d never experienced so much heat (as well as cool wind). The unrelenting sun beamed down on us every day, but I didn’t care because I was enjoying the best sound on earth – the roar of motorcycle engines.

Alone in the desert 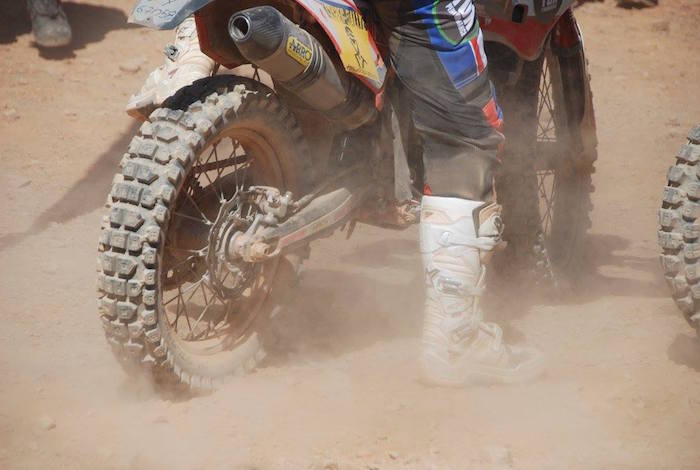 On the penultimate day, the competitors were beginning to feel physically beaten as their muscles were not recovering overnight. One member of the Lithuanian team, Irmantas, had an unpleasant surprise when his clutch broke and he couldn’t reach the support team. Lucky for him, a group of locals appeared seemingly out of nowhere. ‘They offered me some oranges and towed me with their jeep to the nearest rally waypoint’.

The next day was the final stage. Having completed all laps and registered in about 20 waypoints, the motorcyclists had to reach the finish on a high mountain dune. Many racers, exhausted after a long day, simply couldn’t ride up the mountain and reached the finish line on their feet.

The Lithuanian racer Tomas finished third in the amateur class and Irmantas would have scraped second place if it wasn’t for his hiccup with the clutch. My friend Irmantas summarised the experience perfectly when he said ‘it was the failure with my clutch that made me experience the real rally, and I will be bringing home some long-lasting memories’. 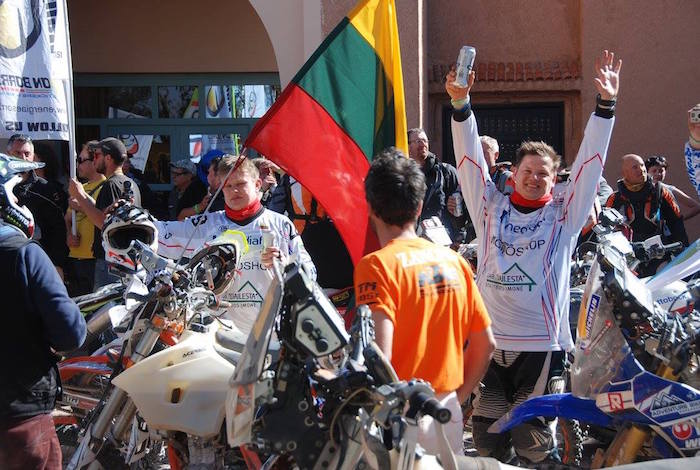 The Tuareg Rally is everything I expected it to be: sand, fast rides and beautiful scenes of nature. The team and I will definitely be returning to a rally like this.

Rallies are fascinating because you can never be sure of the result at the end of the day. Here your speed does not always bring you victory – there are so many other factors such as failures of the bike, getting lost, even success is an important factor.

The Lithuanian team that I joined were glad to be able to show other experienced riders, such as the Germans, Italians and the Dutch, that we’re good riders as well. “We strongly recommend all enduro riders to participate here, at the Tuareg Rallye”, summarised the racers.

For more information on the Tuareg Rally, how to enter and class choice, visit their website.

The Tuareg Rally 2017 has a completely redesigned track. The track will now start and finish in Nador. The ‘pro’ class will cross 3 impressive canyons, the Atlas Mountains and cover over 310 miles of sand dunes including the Erg Chebbi.

Still on the fence? Check out their awesome promo video.