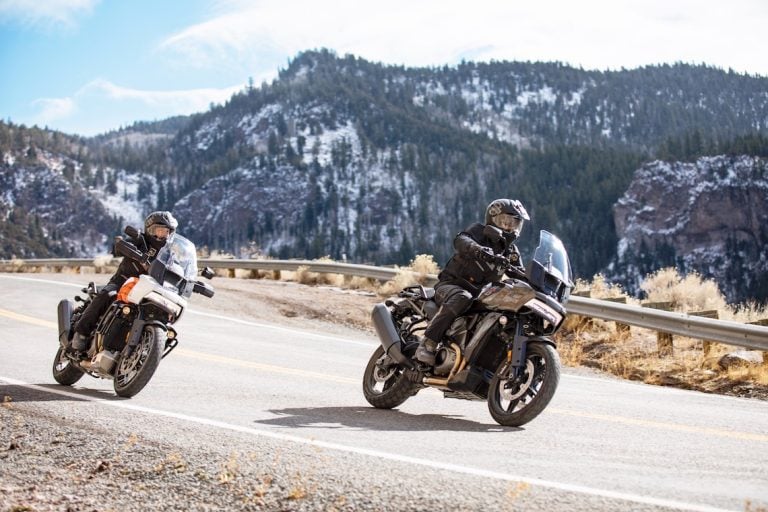 After years of teasing, a few tidbits of information, a delayed launch, and plenty of excitement, Harley-Davidson has revealed the full details about its first adventure bike, the Pan America 1250. And boy, we can’t wait to get our hands on one.

And, as if the release of a new adventure bike isn’t exciting enough, Harley enlisted the help of movie star Jason Momoa to sprinkle some Hollywood glamour on the virtual launch. But, first things first, here are the new bike headlines: 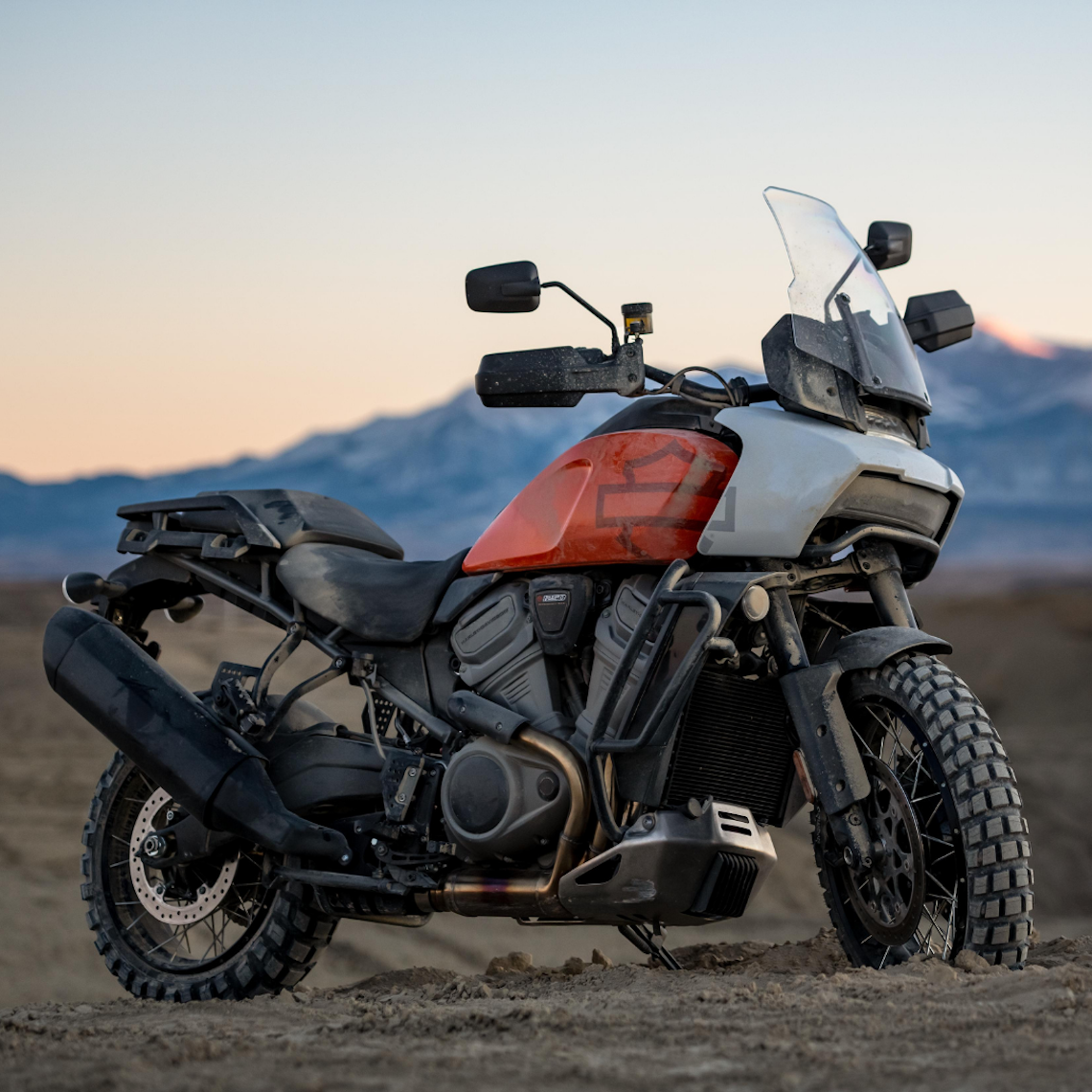 Everything you need to know: Harley-Davidson Pan America

The Harley-Davidson Pan America will be powered by a liquid-cooled, 1,252cc V-Twin engine, which produces 150bhp and 128Nm of torque 6,750rpm. The engine also features variable valve timing, something that we’ve seen recently on BMW’s R 1250 GS. Harley claims this will broaden the powerband, providing more usable power all the way through the Pan America’s rev range.

Fuel capacity is 21.2l which, on paper at least, gives a range of over 200 miles between fill ups, with the stated 51mpg fuel economy taken into account. This will help make the Pan America an attractive adventure touring bike, while the large, four-position windscreen, which can be adjusted with one hand, should also aid long-distance comfort.

Suspension is provided by Showa, with 47mm inverted forks at the front and a single rear shock, both providing 190mm of suspension travel. Both units are adjustable for preload and compression/rebound damping.

The seat comes with a high and low position, with a low height of 869mm rising to 890mm. The entire ensemble will weigh in at 245kg wet, a figure that is pretty par for the course when looking at the Pan America’s competition. 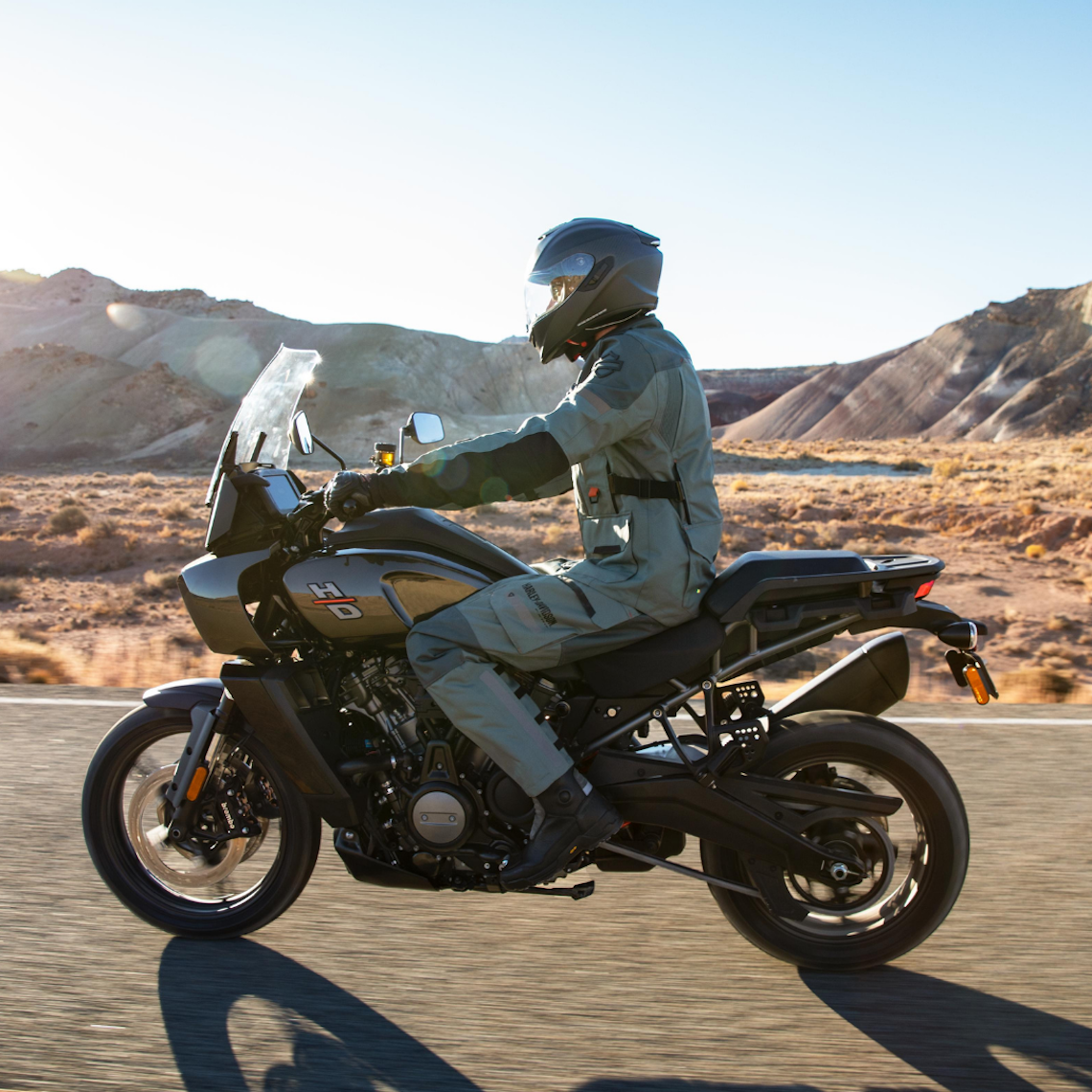 A Harley with technology!

The standard Pan America comes fitted with a full range of electronic rider aids, including a suite of what Harley calls Cornering Rider Safety Enhancements.

The Pan America also comes with five rider modes as standard; Road, Sport, Rain, Off-Road, and a programmable Off-Road Plus. These modes can be changed on the fly and will tweak power delivery, engine braking, cornering ABS and cornering traction control. There’s also a 6.8-inch touchscreen TFT, which can be tilted to allow for rider adjustment when sat down or standing up on the pegs. 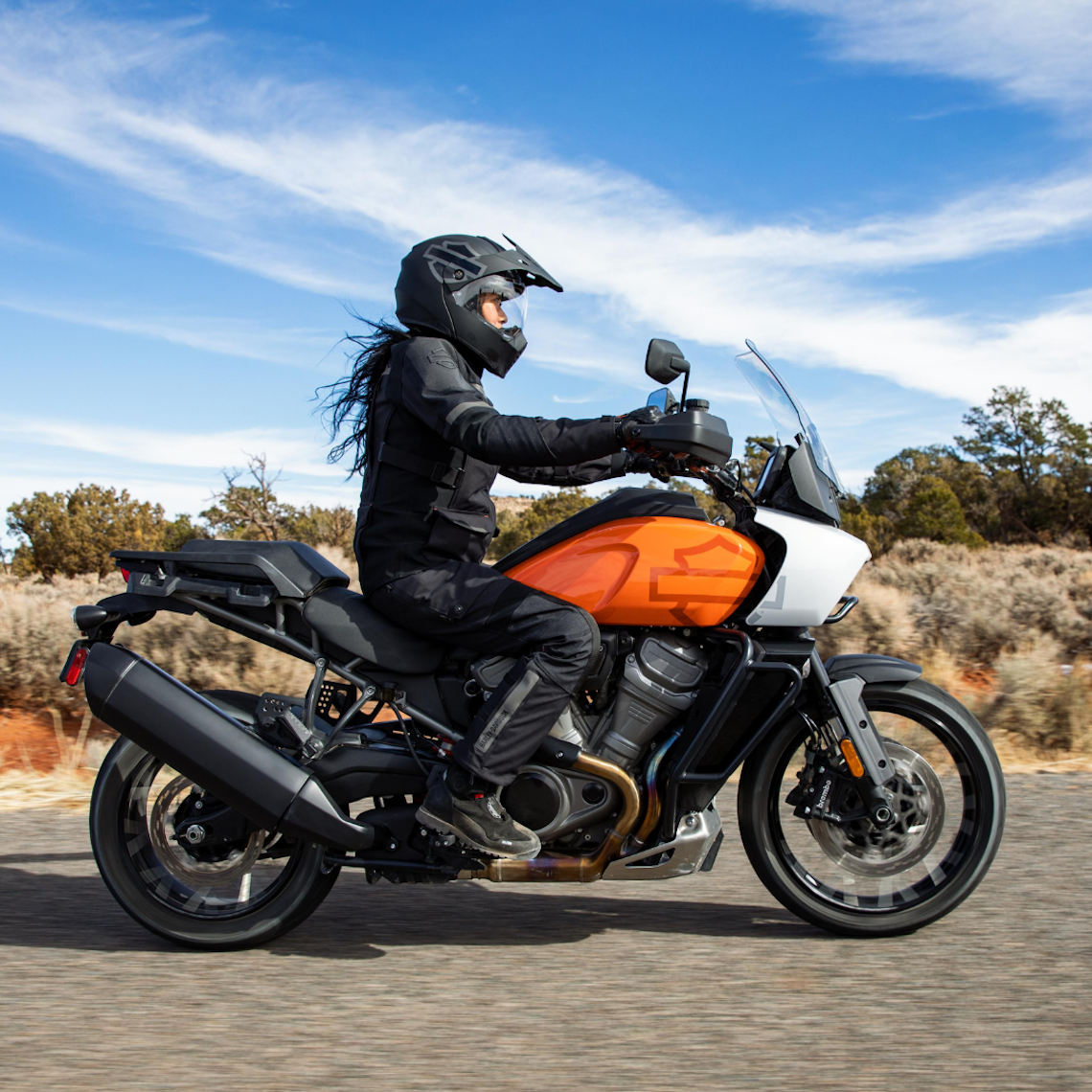 Alongside the standard Pan America, Harley has revealed a specced-up edition of the adventure bike, the Pan America 1250 Special. Weighing in slightly more at 258kg wet, and with a 890mm seat height, it’s a premium version of H-D’s adventure bike.

It comes equipped with even more technological rider aids, including semi-active suspension with vehicle load control, which Harley says will automatically adjust rear preload based on the weight of the rider, passenger, and luggage.

There’s also the inclusion of two more fully adjustable rider modes (on top of the five featured on the standard model), a tyre pressure monitoring system, heated grips, and a steering damper to improve handling during aggressive off-road riding. Other features include a centre stand and a multi-position rear brake pedal to improve brake control when riders are up on the pegs off-road, as well as protection in the form of engine bars and a skid plate.

The Special can also be equipped with Harley’s innovative adaptive ride height as an optional extra. A first for the motorcycle industry, Harley says that adaptive ride height will bring the Pan America Special’s seat height down to 855mm when stopped, before rising to full height of 890mm when the wheels are in motion, without compromising on suspension travel, lean angle, or ground clearance while riding.

It’s an interesting feature that could well be a blessing to those who on the shorter side, or those who prefer to flat foot at traffic lights when riding a large-capacity adventure bike. I admit, I’m intrigued to see how it works in practise.

Watch the Pan America in action:

Fancy watching the new bike in action? You can watch its official release video below, directed by Hollywood star Jason Momoa.