The motorcycle guide to Italy: The Central Italian Alps 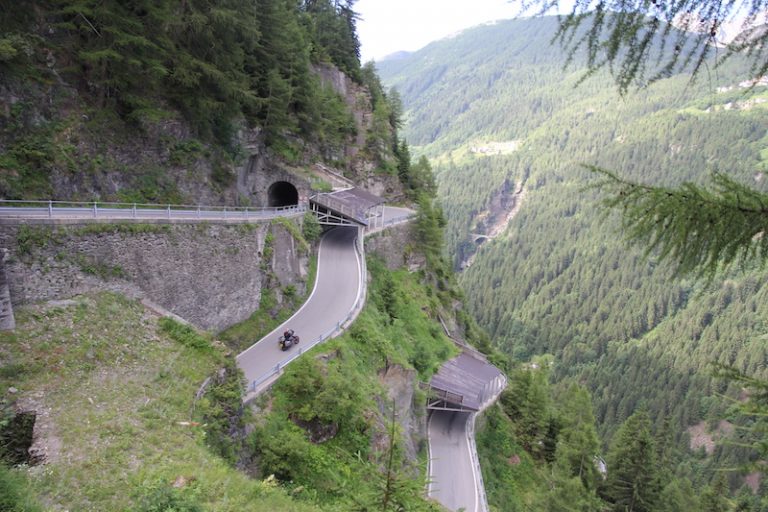 Spectacular Alpine passes bordering Switzerland, the Italian lake district and the lowlands of the Po Valley all characterise the wonderful Central Italian Alps.
From the eastern coast of Lake Maggiore, taking in Lake Como and Lecco to the dramatic high cliffs on the western coastline of Lake Garda, the Central Italian Alps feature some of the best road touring and tourist-friendly regions of Italy.

The Central Italian Alps consists of a single region; Lombardy. Lombardy stretches from the border with Piedmont in the west (check out our guide to riding in North West Italy) at Lake Maggiore, to the shores of Lake Garda in the east. The northern Alpine border is shared with Switzerland whilst, in the south, Lombardy extends beyond Milan and Brescia into the extensive flatlands of the Po Valley.

Lombardy is certainly a region of contrasts, offering motorcyclists a rich choice of spectacular mountain passes and roads, beautiful lakeland scenery, cities rich in culture and history plus it’s a region with a strong motorcycle background, with MV Augusta and Moto Guzzi being local residents.

Ask a group of bikers to name their favourite Alpine passes and you can be sure that either the Splügen or Stelvio will feature (along with the Colle del Sommeiller for the adventurous types). Topping out at 2,757m above sea level, the Stelvio is the highest paved pass in Italy and second highest in the Alps, whilst the Splügen takes an audacious line across and down vertical precipices complete with balcony sections which were cut from the rock back in 1823 (as shown in the image to the left).

Having travelled extensively by motorcycle over the past 40 years, I can tell you now, one of the finest motorcycle day rides in the world is to be found in Lombardy – with a brief detour over the border into Switzerland.

Starting off at the Splügen Pass and calling it a day at the Tonale Pass, where Lombardy meets Trentino, the route is 176 miles of Alpine and motorcycle heaven. I guarantee that you’ll spend the day gasping at the natural scenery, which makes this journey such a pleasure, and in awe of the stunning engineering accomplishments which have made this ride possible.

I’ve ridden this route many a time and I never tire of the ride. Starting off at the Splügen Pass, you’ll find yourself wanting to stop every 200 metres or so to check out the stunning line of the road and the precipitous drops down into the valley.
After a brief stop to catch your breath and a coffee in Chiavenna it’s a quick blast up the Bregaglia Valley and over the Maloja Pass into St Moritz before turning south east back into Italy on the road to Tirano.

At Lake Bianco, under the glaciated 4,048m peak of Piz Bernina, you take the mountain road over to the Italian ski resort of Livigno where I like to stop and fuel up with another Italian coffee.

From Livigno it’s a quick blast back over the Swiss border and down to the village of Glurns before heading south east to Stilfs and the magnificent northern approach of the Stelvio Pass.

At the top of the pass, it’s a bit of a biker tradition to stop and have a bratwurst from one of the stalls and take in the spectacular views over the glaciated Ortler Range. Whilst the northern approach to the pass is a relentless procession of tight hairpins, the ride down the southern side to Bormio is more open but no less spectacular or demanding.

From Bormio a left turn takes you up and over one of the most unsung passes in Italy, the Gavia Pass. The pass is mostly single track through spectacular scenery, features multiple switchbacks and it’s very popular with bikers. At 2,621m high it’s also the third highest pass in Italy, and many a motorcyclist will tell you the riding experience is better than that found on the Stelvio which can, in the main summer season, be very busy.

Speaking of which, I’ve ridden both these roads in mid-summer and early October and, if you get the weather (we had bright blue skies), early October is a great time to tour with far less traffic on the roads.

The Gavia Pass road hits the main SS42 highway at Ponte di Legno where you can open up the throttle on the superb curves leading to the Tonale Pass. You’ll find plenty of hotels and cafes at the Tonale Pass and it’s a good place to overnight before pressing on to the Dolomites in the morning.

There’s no doubting the draw of high Alpine passes to motorcyclists, but no tour of Italy can be complete without taking in one of the many lakes to be found in Lombardy. Lake Como is probably the best known and offers both great riding and magnificent scenery, as does Lake Maggiore and the smaller Lake d’Iseo.
However, given the choice, I prefer to head further east and onto the road up the western coast of Lake Garda. If you’ve only visited the flat southern shore of the lake, then you don’t know what you’re missing.

One easy way to check out what you’ve been passing up on is to watch the opening scene in the James Bond film Quantum of Solace where the bad guys chase Bond along the road skirting the Lake Garda shoreline. If you find yourselves in these parts, do not leave until you ride the incredibly spectacular Strada della Forra road, which Winston Churchill defined as the Eighth Wonder of the World.
Before leaving Lake Garda, I’m going to recommend you take the SP9 from the village of Gargnano over to Lake d’Idro, it’s just one of those scenic local roads you’d never think of taking but will always remember riding.

If you’re thinking of heading to Italy on your next motorcycle tour, then check out our Ultimate Guide to Riding in Italy. With 24-pages of useful, informative and inspiring content, it’ll help you plan out your next tour. Fill in the form below to get your guide.