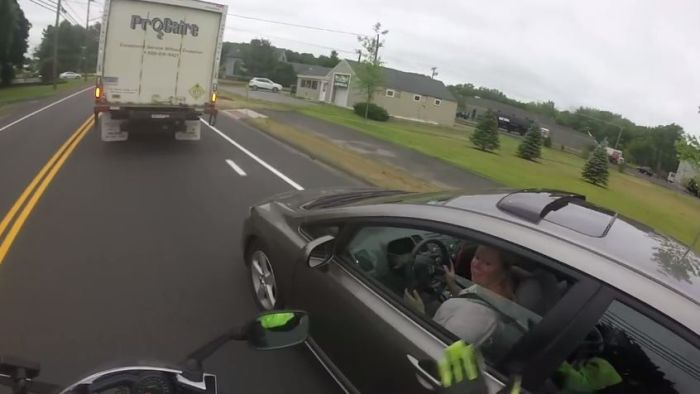 For all of the obvious positives of riding a motorcycle, the pastime also includes a unique set of negatives.

When getting on a bike you accept the extra element of danger compared to being in the shelter of a car, so when other road users act in a way that can have serious consequences to your health and safety, the anger and frustration is often palpable.

Some of the biggest fears among riders are distracted drivers. Whether it’s because they are on their phone or applying makeup, the permutations of what may happen as a result doesn’t bear thinking about.

This is particularly worrying when cars pull out into your space without even noticing you are there. Admittedly, the driver doesn’t have to be distracted for this to happen, but it’s one of the most common bugbears among bikers.

Well, that seems to be exactly what happened in this video below. The biker was riding along minding his own business until he gets to a point where the road starts to merge from two lanes into one.

Remarkably, the car next to him doesn’t even seem to notice he is there and proceeds to move over into his lane forcing him to sound his horn and take avoiding action. Fortunately, there is no accident and the motorcyclist is able to deliver a large dose of karma almost instantaneously. Check it out in the video below.

But were there any repercussions for the driver? Apparently so. In the comments, the original poster, CrashTestDave, said: “She got two tickets, one for passing on right and one for unsafe lane change. Cop was a cool guy and after he was done with what he needed to do we all went on our way.”

Have you had any similar experiences? Let us know on Facebook, Twitter or in the comments below.