The Motorcycle Guide to Central Italy 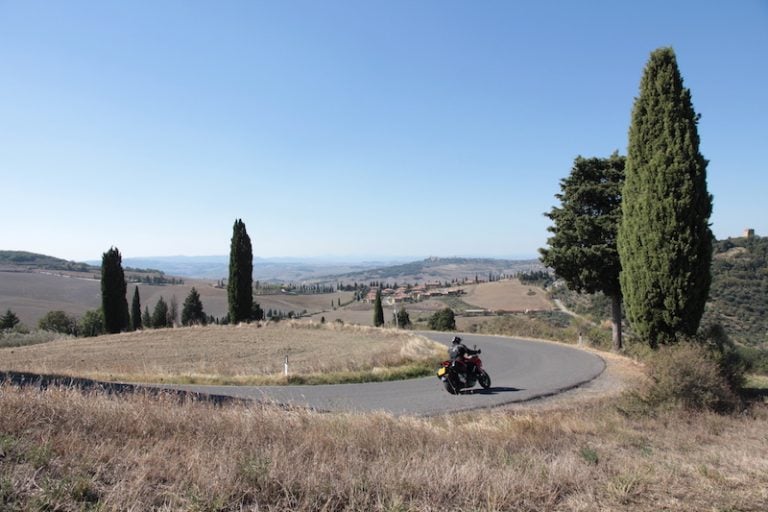 For the purpose of this guide, Central Italy comprises of the following regions: Emilia-Romagna, Tuscany, Umbria, Marche, Lazio and Abruzzo. Essentially, we’re looking at the region from the flat Po Valley in the north, down mid-way between Rome and Naples.

Riding from Venice to Bologna after descending out of the Dolomites (perhaps after following the routes laid out in our guide to the Eastern Alps), you could be forgiven for thinking ‘well that’s the end of the interesting roads in Italy’, but nothing could be further from the truth. As you approach Bologna the land starts to undulate and rise as you head into the Apennine Mountains, which run for 750 miles down the length of Italy.

The Apennines are a series of mountain ranges that form the backbone of the Italian peninsular, stretching from the coastal region of Genoa in the north and following a broad arc to the tip of the Italian toe at Reggio Calabria in the south. The highest summit of Corno Grande (2,912m) tops out in the Abruzzo region where, should you be touring in winter, you can ski and ice climb as I’ve done a few times in years gone by.

However, when in Bologna you must set aside some time for a visit to the Ducati museum where you can take a factory tour. You don’t need a prior booking for the museum, but you will need to book in advance if you’d like to go on a factory tour.

At the time of writing, the factory is closed to visitors on Wednesdays and weekends, so you’ll need to bear that in mind when planning your trip. Check out www.ducati.com for up-to-date details, timings and prices. 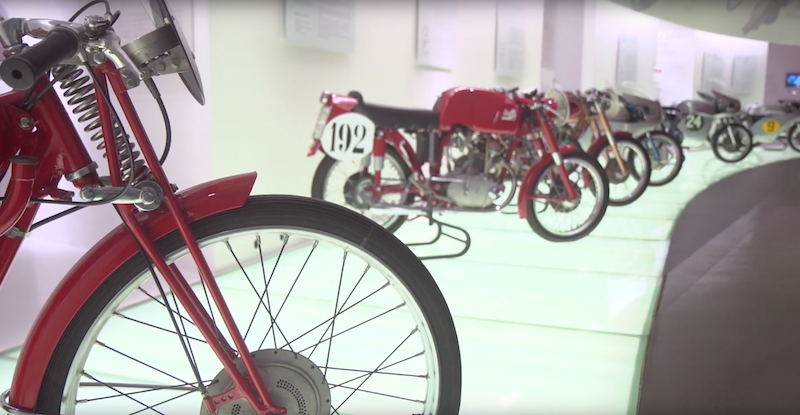 Heading south from Bologna towards Florence, you really can’t go wrong. The whole region is full of winding mountain roads through a landscape rich in history and archaeology. However, my personal favourite involves a route that takes in the Raticosa and Futa passes and a pass by the famous Mugello Circuit, where the Italian MotoGP is hosted.

Be warned though, this route, especially from the Raticosa via the Futa and onto Lake Bilancino near Mugello, is as close as you’re likely to get to competing in a road race. If I said to you that, on a good day, this stretch of tarmac is the Italian equivalent of Mad Sunday at the TT, I’m sure you’ll get the picture. These passes are incredibly popular with motorcyclists that appear to have a point to prove and it’s not that they enjoy a slow sight-seeing bimble.

That said, it’s a thrilling ride with endless, sweeping turns and it’s not to be missed when passing through the area on route to the spectacular city of Florence.

If you’re anything like me, city tours do not feature highly in my motorcycle touring plans, but I make an exception when touring Italy. Venice is a must-see, as are the sights of Rome and Pisa, if only for the Leaning Tower in the case of the latter. If you only have the time or patience for one city visit, then make it Florence.

Florence is a work of art. Its cathedral and baptistery are magnificent as is the Piazza della Signoria, the Ponte Vecchio bridge and Medici Riccardi Palace. On the downside, they will be teeming with tourists. There are also excellent museums which house many world-renowned paintings and sculptures including perhaps the most famous sculpture in the world, Michelangelo’s David, and Botticelli’s Birth of Venus. At the very least, it’s worth parking up the bike for a day and checking out this amazing city and its sights and treasures.

Anyway, enough of this culture, let’s get the show back on the road and head further down into Tuscany. Historically, my visits to Central Italy have been dictated by my climbing gene so I would set course for the areas of highest elevation and therefore ride down the east of Tuscany and into Marche and Abruzzo before swinging right and heading into Rome. 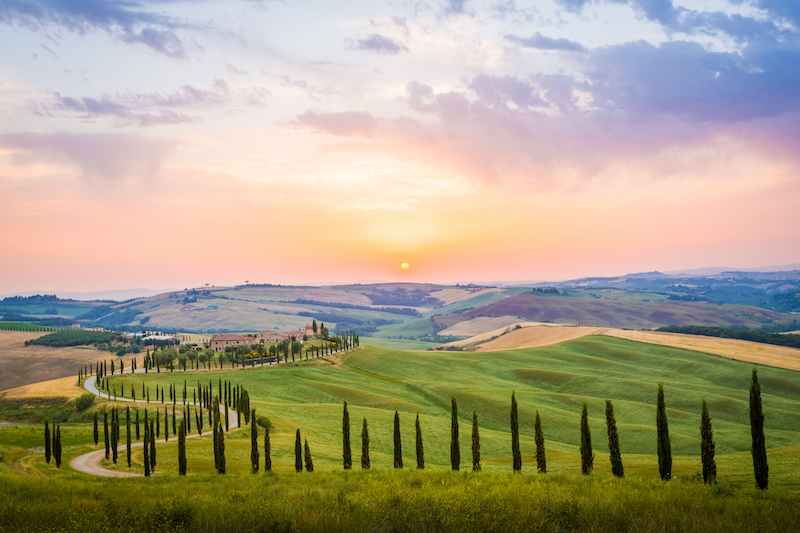 Over the past 10 years I’ve mellowed out a touch and have tended to take the more cultured approach down through Tuscany. Setting out from Florence via Siena, it would be a mistake not to check out the famous historic centre and majestic Piazza del Campo the setting for the famous Palio di Siena horse race, which is held twice each year; 2 July and 16 August if you happen to be in the vicinity.

From Siena we set a course through the picture-postcard Tuscan scenery to Montepulciano, a well-known Renaissance hill town that’s famous for its red wine. If you have the time, it’s worth parking up the bike and walking through the car-free streets to the Piazza Grande at the top of the hill.

From Montepulciano it’s a short hop and skip to the town of Pienza, another classic depiction of the Tuscan hilltop commune. Pienza has been declared the ‘touchstone of Renaissance urbanism’ and, in 1996, UNESCO appointed the town World Heritage status and it’s well worth stopping off for a coffee in its bustling historic centre. 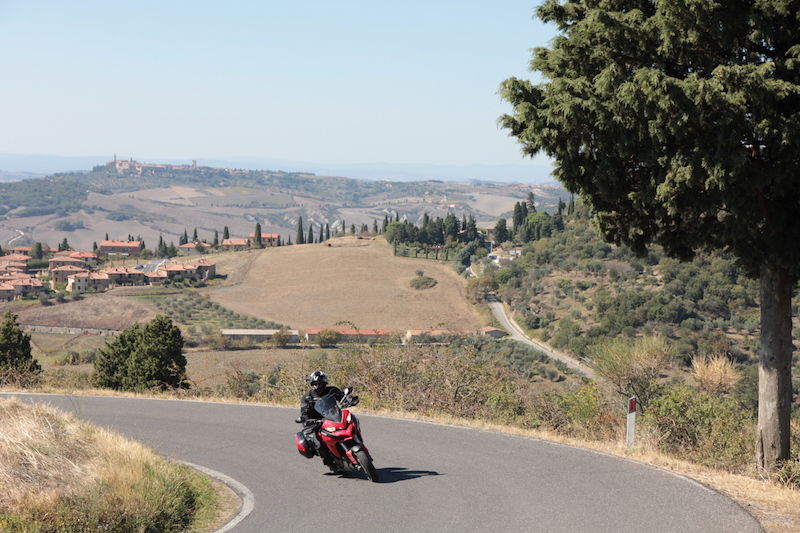 The scenery around Pienza and Montepulciano is classic Tuscan rolling hills with towns and villas cresting the higher elevations with many featuring vineyards. The roads in the region are full of twists and turns and are generally open with great onward visibility as they follow the contours of the land, but they could pretty much all do with a new coat of tarmac. ‘Rustic’ is probably the appropriate word to describe the road conditions in this delightful location, and if your heart desires, there’s a huge network of gravel trails.

As we head south from Pienza I’m going to implore you to do two things: check out the Val d’Orcia, and stop off at Bagno Vignoni. The Val d’Orcia is a beautiful valley of rolling hills, vineyards, Renaissance villages and atmospheric zig zagging roads lined with cypress trees with the most famous being the road up to Monticchiello. I guarantee you’ll not be able to resist a photo stop.

And just before we settle down for a long thrilling ride down through Central Italy there’s one more stop off a few miles down the road from Monticchiello which is once again guaranteed to have you scrambling frantically for a camera.

I first set eyes on the main square of the small 16th century village of Bagno Vignoni on a cold, dark evening during the launch of a new Ducati motorcycle. The sight before me was both surreal and breath-taking.

The whole of the village square (about the size of a five-a-side football pitch) is a sixteenth century (though the spring was used thousands of years prior), walled-in hot bath fed by warm waters from a spring and there, in the middle, ‘walking on water’, was the new motorcycle enshrouded by an eerie Ducati red. Bikes in the bath or not, Bagno Vignoni is not to be missed.

If it were not for a planned detour over to Sardinia, my route south from Tuscany would have looked like this; a ride through the high mountains of the Gran Sasso and Abruzzo National Parks followed by a ride up my favourite road in the region, the SP10 on Monte Terminillo.

It’s a fantastic road full of tight zig zags and sweet curves up a high 2,000m-plus mountain. The scenery is spectacular, and it never fails to amaze me that in years gone by I’ve found myself ice climbing on a high, exposed snow crusted ridge within 50 miles of Rome; somehow ice axes, crampons and Rome do not feel as if they should be in the same sentence.

With Sardinia being the main target of this trip, we set a course from Bagno Vignoni to the port of Civitavecchia, just to the north of Rome, careful to avoid any main roads. If you intend to follow our route, you’ll not be disappointed on this ride through the north of Lazio. The roads are spot on, there’s little traffic or tourists and the villages are full of charm and history.

If you’re planning on touring in Italy, then you’ll want to check out our free 24-page guide to touring in the country. Along with the wonders and joys of riding in Tuscany, we’ll give you suggestions on roads not to miss on your next European tour, including the magnificent off-road Colle del Sommelier, the iconic Stelvio Pass, and one of the most visually stunning rides you can ever hope to witness from the saddle of a motorcycle, the Sella Ronda in the Dolomites. To get access to the full 24-page guide, simply fill in the details below.