Rider etiquette: do you gesture to other bikers when riding? 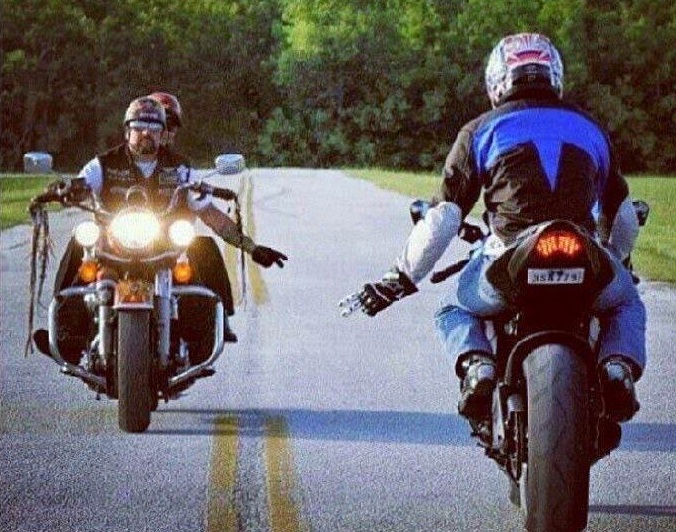 It’s one of the things I love most about being part of the motorcycling community – nodding to other bikers when I pass them on the road. You don’t know each other, you’re probably riding different motorbike models, but you nod as a sign of respect to a fellow rider and as if to say, “have a good ride mate, safe travels.” Well, that’s how I see it anyway. I know there are also a lot of people who don’t see it the same way, and that’s also fine.

I was interested to know what our ABR followers do when they’re out riding their motorbike, so I posted the below photo to our Facebook page last night with the question: Do you nod or gesture to other bikers when riding? Here are just some of the responses we received. 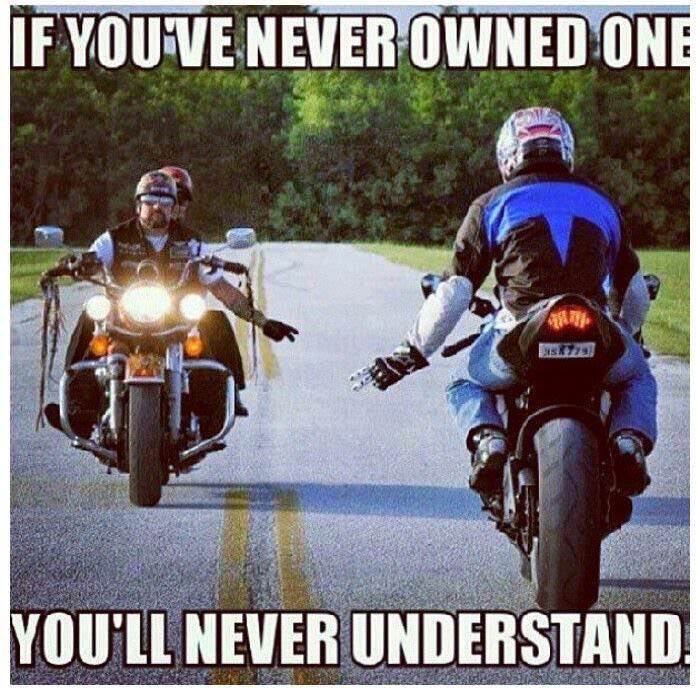 Tony Hastings said, “Here in Australia, every rider nods or waves as we pass, except guys on Harleys, who never return the nod. Perhaps they only nod to each other. What’s with that?” To which he got a lot of replies on his comment thread, including these three…

>> John Lainsbury: “It’s the same in the UK mate! Everyone else nods or raises a hand because we’re all bikers.”

>> Douglas Lipscomb: “Most are pr*cks. 10 mile round trip ‘bad asses’ who act like they define and lead the motorcycle industry. I stopped waving to ’em.”

>> Doggit Walters: As a Harley rider, I can confirm: They vibrate so much, most of us can’t see another bike, let alone wave…”

Chris McMahon said, ” I nod or wave if I see them in time and it’s safe. I don’t mind what you ride, although I’m dubious when it comes to L-plate scooters… They’re usually chavs where I live, the last one was texting and riding.”

Jerry Blakey said, “I wave at anyone I pass. I have 46 years of riding behind me and I am happy to see people out riding and enjoying their motorcycle. What is scary, is I see a lot less younger riders to wave to.”

Col Frith said, “Yes, but the ‘snobby ones’ never nod back. They know who they are. Hence I nod early, so if they don’t, I can give ’em the finger!”

Steven Hallett said, “Here in France, almost all motorcyclists put a hand out or not to acknowledge you. The Harley riders do so, its the GS rider that often don’t.”

Dale Grover said, “I sure do, it annoys the crap out of me when I take the time to do it and I don’t even get a response.”

Chris Cyr said, “Harley riders won’t even make eye contact with me when I’m on my KTM, which I’m more than okay with.”

Lynda Selk said, “I ride a Harley and a BMW, and I wave at everyone as long as I’m safe. Don’t blame the bike, blame the d*ck on the bike. D*cks ride all kinds of bikes.”

Peter Clark said, “I had a Vespa for a while, nobody waved but other Vespas. I have had other bikes since, and now I’m very picky about who I wave or nod at because some of those snobs don’t deserve my acknowledgement. Who cares what you ride. Can’t be doing with the snobbery of sport, cruisers etc. I make a point of waving or nodding at every scooter or bike with L-plates on though.”

So, do you agree or disagree with any of the points above? Do you have anything to add to the debate? I’d love to know your thoughts, let me know in the comments section below.