Meet Steph Jeavons: The first woman to ride a motorcycle on all seven continents 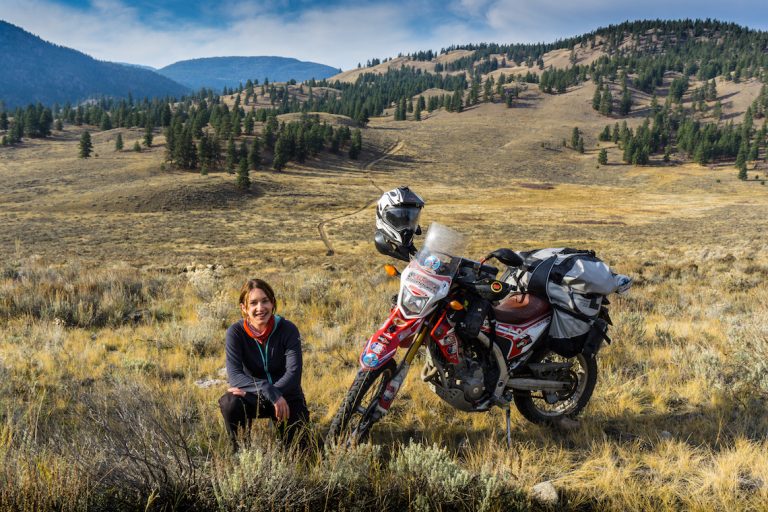 After covering more than 74,000 miles through 54 countries, Steph Jeavons arrived home a record breaker. Four years on from leaving London’s Ace Café on her trusty Honda CRF250L, she became the first woman to ride a motorcycle on all of the world’s seven continents.

That wasn’t all though. Steph’s trip also made her the first two-wheeled adventurer to visit all seven continents during a circumnavigation of the globe. It’s an achievement that has put Steph’s name right up there with icons of the adventure motorcycling world, such as Ted Simon and Elspeth Beard.

And now you can read all about her epic journey in her new book, Home By Seven. It’s an entertaining and inspirational read that will make you feel as if you’re riding pillion on Steph’s record-breaking ride.

I caught up with Steph to discuss her trip, life on the road, and how one tequila-fuelled night inspired her to chase her dream. 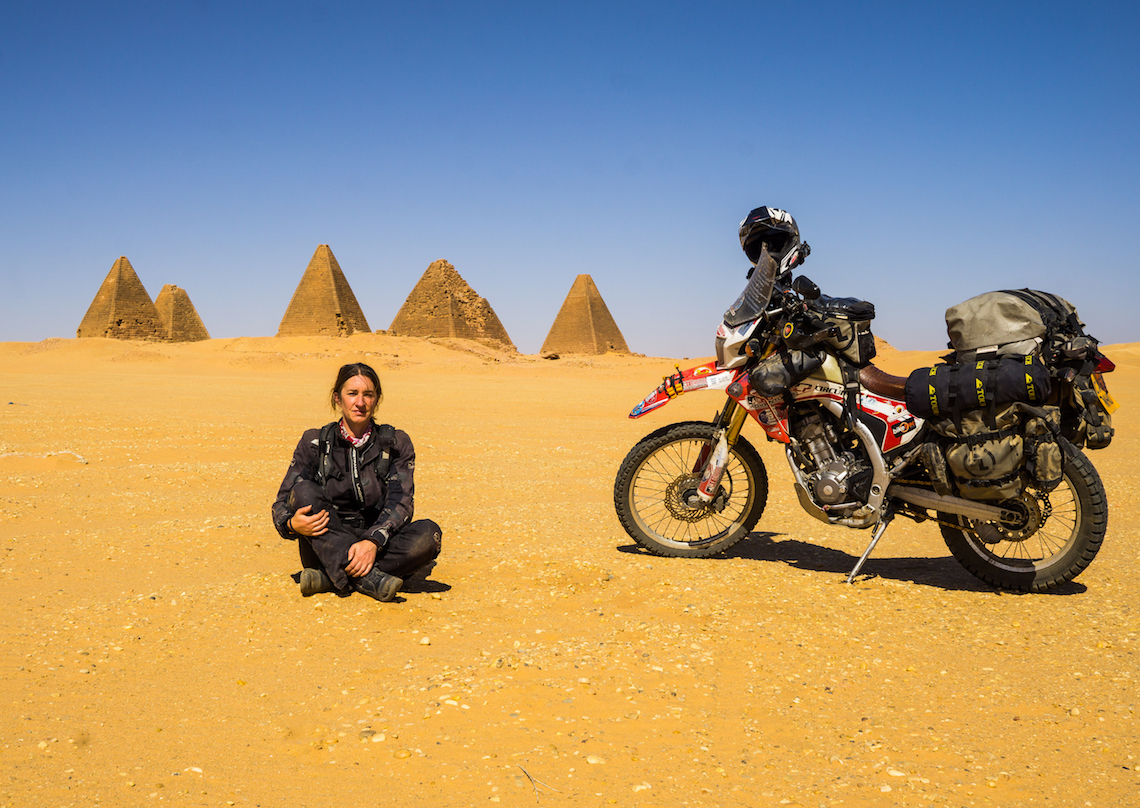 This year has been a strange one for us bikers, although I’m sure the release of your new book Home By Seven has been a welcome silver lining. How have you found yourself coping?

“I must admit that for the first three weeks I did very little other than trying to teach my dog to use a treadmill. I mean, I was still walking her, I just thought, given enough time, it might evolve into a Britain’s Got Talent Act, you know? She’s a very clever dog, a bit of music and a routine and we might have been stars.

“Thankfully, after three weeks I got bored of that idea and started working on my book instead.”

I’m sure plenty of adventure bikers are happy you chose that option too! So, why motorcycles?

“They have always been a passion of mine. My parents rode bikes. My first boyfriend had a Yamaha RD 250, a mullet hairdo, and always wore his black leather jacket, no matter what the occasion.

“By the age of 21, I had passed my test and never looked back. It has always had the ability to give me a sense of freedom, and control I guess. I also just loved the smell of leather. I miss that.” 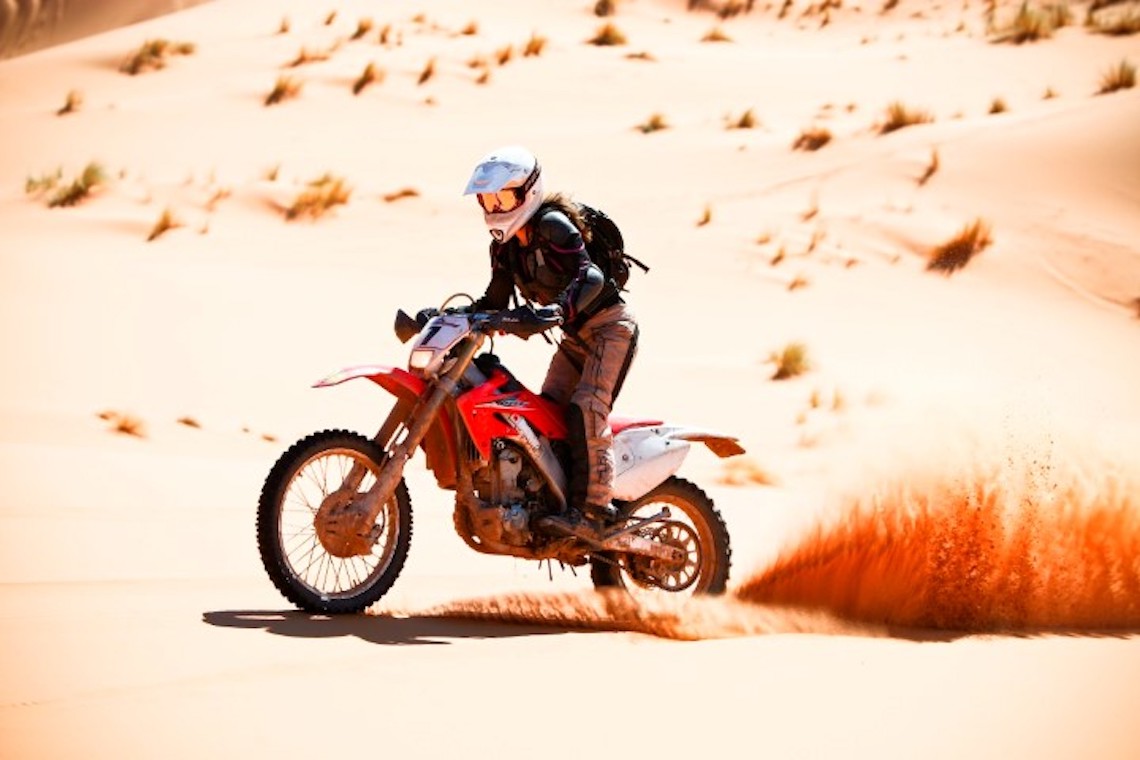 What was the first big trip you did on a motorbike?

“My first big trip abroad was in 2008 when I took up a challenge to ride 1,500 miles off road in South Africa for charity with about 90 other people.

“I’d never ridden off road before so it really was a challenge in every sense of the word. Despite returning home with calluses on my arse and bruises just about everywhere, I was hooked.”

Riding around the world and visiting all seven continents on two wheels is no small feat, what inspired that dream?

“It evolved from a burning desire to ride off into the sunset. The urge to escape and the need to make the most of my short time on this earth. I had wasted enough time in my youth and, whilst in a very dark place at the age of 20, I had promised myself I’d one day see the world.

“The motorbike just seemed like an obvious choice to me and visiting all seven continents was, I guess, just my dreams running away with themselves. Oh, that and the tequila lubricating my mouth one night. Once I’d said the plan out loud in the presence of other people, I couldn’t take it back.” 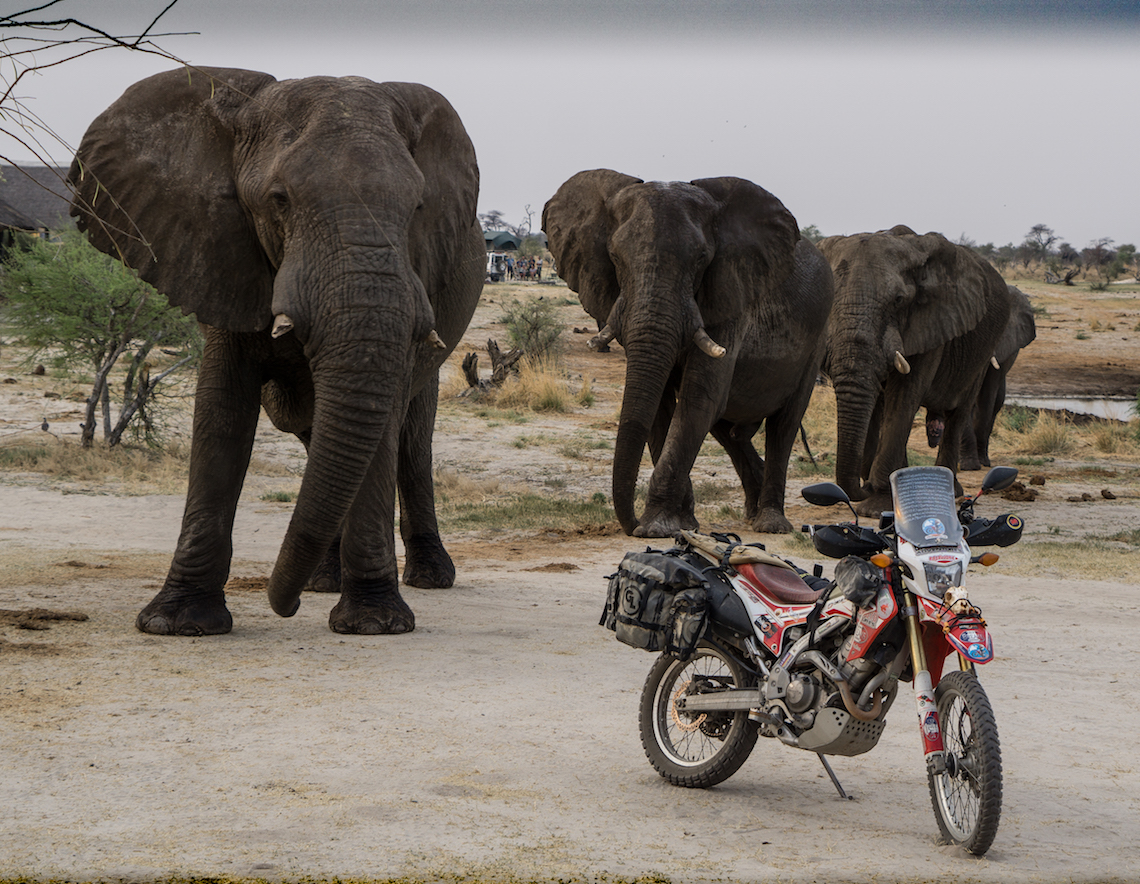 In Home By Seven you’re open about facing drug addiction and being in prison at the age of 20, do you think you’d have achieved what you have since if you hadn’t gone through them?

“I’m not sure I can answer that question. Who knows. What I do know is that it was prison that made me really appreciate, and want to make the most of, my freedom.

“Perhaps it also made me realise that I was able to survive most things should I put my mind to it. If you can survive being cages with a load of hormonal, drug starved women, you can survive anything.”

Your trip took almost four years to complete, a huge amount of time. Did you notice the world changing around you as the months and years rolled by?

“Well Trump was elected President in that time and we all know how that went.

“Closer to home though, there were many things that changed. I became a grandmother while I was away and she was four by the time I got home. I had friends who had two children before I got home. A lot has changed, including my own perspective.” 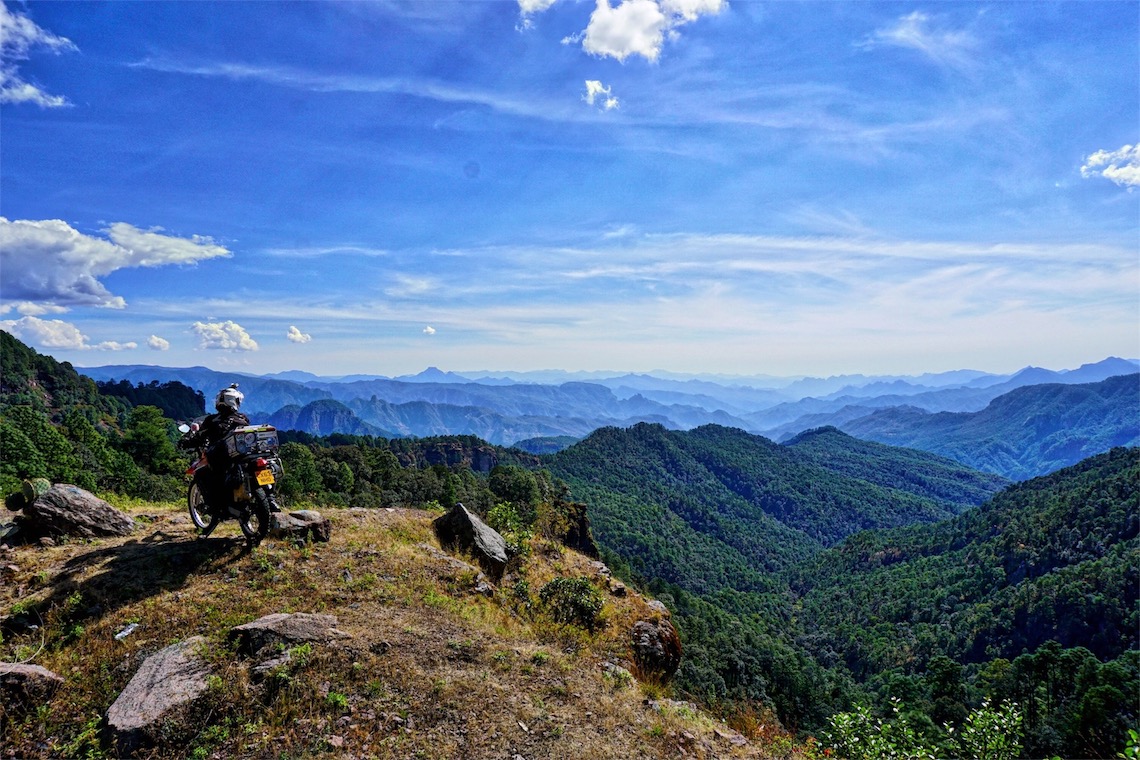 How did you find people’s reaction to your journey as a lone woman traveller on a motorcycle? In your book you often mention concerned comments and emails you received from followers warning you off visiting certain areas, but did you find that to be necessary at all when you were travelling?

“Ninety-five percent of the time people’s reaction was positive. Really positive. In fact, in some countries, men wanted to help and protect me to the point of being suffocating. However, in most countries the reaction was simply friendly and inquisitive.

“Seeing a woman rocking up in body armour and covered in a thick layer of dirt or diesel fumes was often just greeted with a look of utter disbelief though. I liked that one the best, I think we all secretly like to have the ability to shock.

“And yes, I was indeed warned of my impending doom on many occasions, but it was very rare to find any malice or ill will towards me. I think we all know there are good and bad everywhere, but our own perspective on things can help, along with a stern voice when needed and big dollop common sense.”

Are there any particular countries that stand out from your travels? And, on the flip side, were there any places you were glad to see the back of?

“Ethiopia was one of my favourites. It was cooler than much of the countries I had just been through for starters, and the scenery and mix of cultures is like nowhere else in the world.

“I also loved Canada for its long stretches of forests and abundance of out of the way trails. Oh, and Mexico. Can I sneak that one in at the end? It’s a beautiful country.

“I didn’t really enjoy El Salvador, though I’m not sure why. It just felt really nice to cross the border into Guatemala. Calmer somehow.” 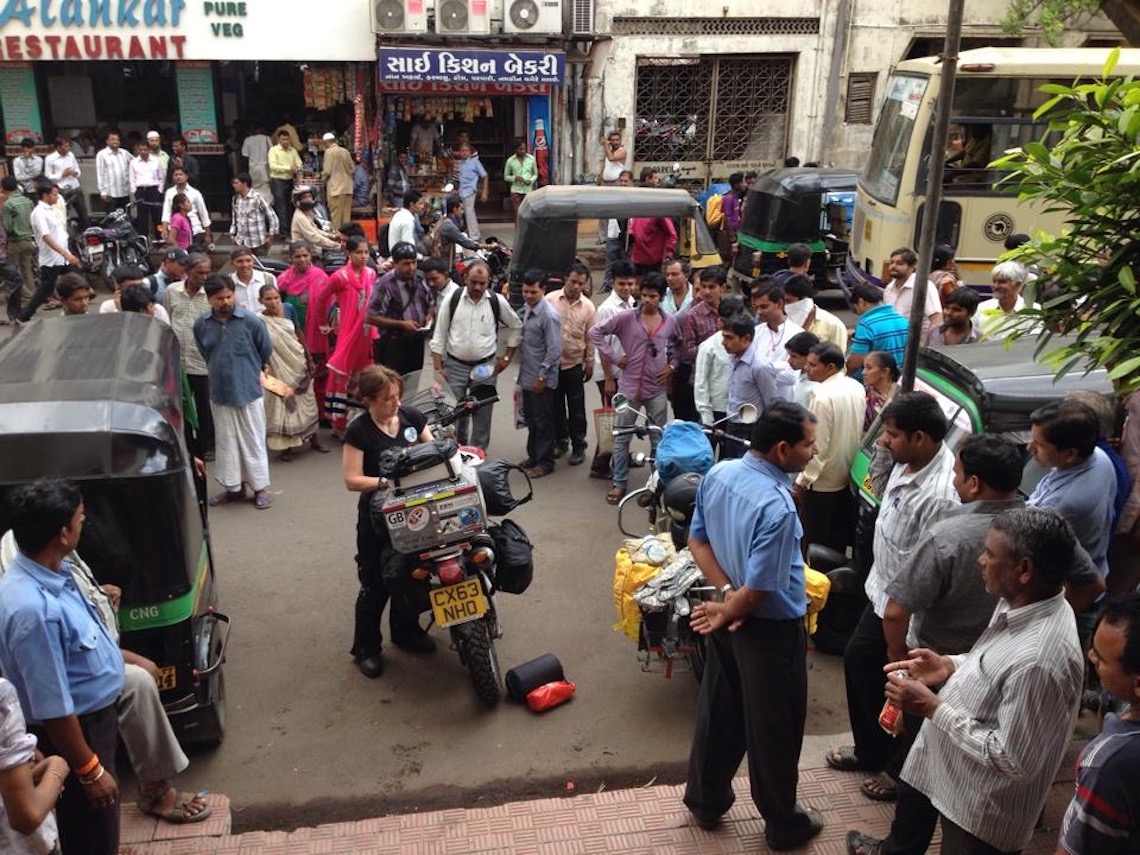 Tell us about some of the sketchy moments on the road? Were there times when you considered giving up?

“I’m not sure I would say considered giving up exactly. I did have times when I felt the need to ask myself if it was still what I wanted and whether it was time to go home.

“That was often due to tiredness, or pain. I often suffered with back and shoulder issues, including an excruciating frozen shoulder that meant I could barely move my arm for several months.

“There were many sketchy moments though. I suffered heat exhaustion in India. I was hit by a landslide in the Himalayas, I was blown off my bike in Patagonia, and hit by a truck in Columbia. Should I go on?

“Those scary moments didn’t last long though, thankfully and, of course, they made for great stories later.”

We can’t wait to have you at the ABR Festival 2021 next year, but what are your other plans for the future (Covid 19 permitting, of course)?

“I can’t wait to be there. Sadly, otherwise, most of my foreign trips have been cancelled in the near future.

“I do still hope to get over to do a recce for a new off-road South African trip next year, and I am still running trail riding tours in Wales. Bring on the day when we can travel again without fear of cancellations.” 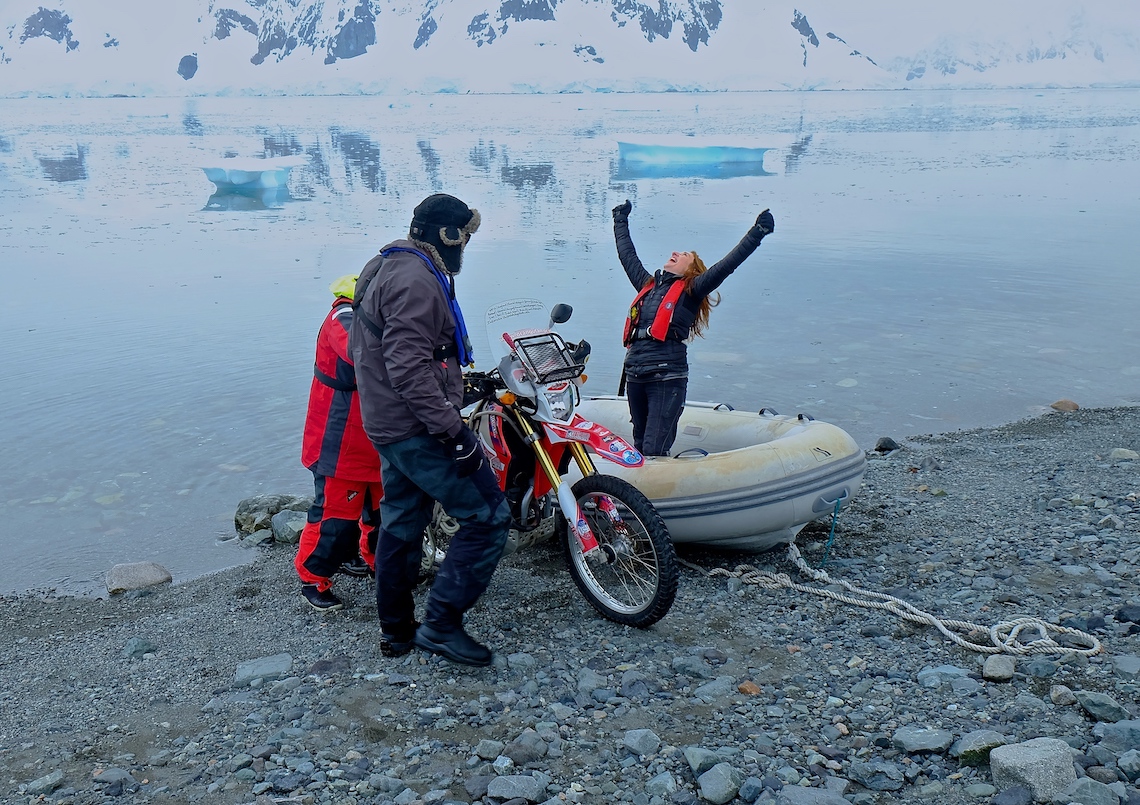 Steph has re-lived her record-breaking journey in her new book Home By Seven. It’s an honest and inspiring read that details the incredible highs, as well as the tough lows, that make up an attempt at becoming a world record holder.

You can discover Steph’s story for yourself by picking up your own copy of Home By Seven, which is available to purchase here.

Steph will be one of a host of well-known faces from the world of adventure biking you can meet and hear speak at the 2021 Adventure Bike Rider Festival, which is once again sponsored by Bridgestone.

We’d love to see you there, so we’re gifting you a £10 saving with a discounted ticket, but don’t hang around because they will sell out soon.

So, what are you waiting for? Guarantee your place at the largest celebration of adventure motorcycling ever held in the UK by getting your ticket today.

What happens if 2021’s event is cancelled because of a global pandemic?

It’s perfectly understandable to be asking that question given everything that’s happened in 2020. We hear you loud and clear, so we want to let you know that we’ve put in place a policy that will protect you and your cash in the instance that we have to re-arrange the Adventure Bike Rider Festival 2021 because of coronavirus.

If that happens, we will give you the option to either roll your ticket over to the next year’s event or claim a full refund. We’re here to serve you, and that means everything we do will be with your best interests at heart.