The incredible story of The Girl On A Bike

If you’ve ever scrolled through adventure biking photos on social media, chances are you’ve come across images of Vanessa Ruck, aka The Girl On A Bike, ripping up the trails on various mud-splattered motorcycles.

But behind the action shots and infectious smile that she shares with her thousands of followers online is a story of grit, determination, and a refusal to give up on a motorcycling dream.

Ollie Rooke caught up with Vanessa to discover the incredible story behind The Girl On A Bike and to find out how the Adventure Bike Rider Festival inspired her.

It was a bicycle accident of all things that got Vanessa Ruck into motorcycling. She was cycling home from work one night when a car ran a red light and knocked her flying. After being rushed to hospital, doctors failed to properly identify her injuries and sent her home.

It was a fateful decision that would have painful repercussions and change the course of Vanessa’s life.

She says: “Back then I was fit, I was athletic, and I was healthy but that all changed when I got on my bicycle after work. If I fast-forward to now, I’ve had seven surgeries including a reconstructed shoulder and hip. They couldn’t have been more wrong that night at the hospital. I was actually sent home with bruising! 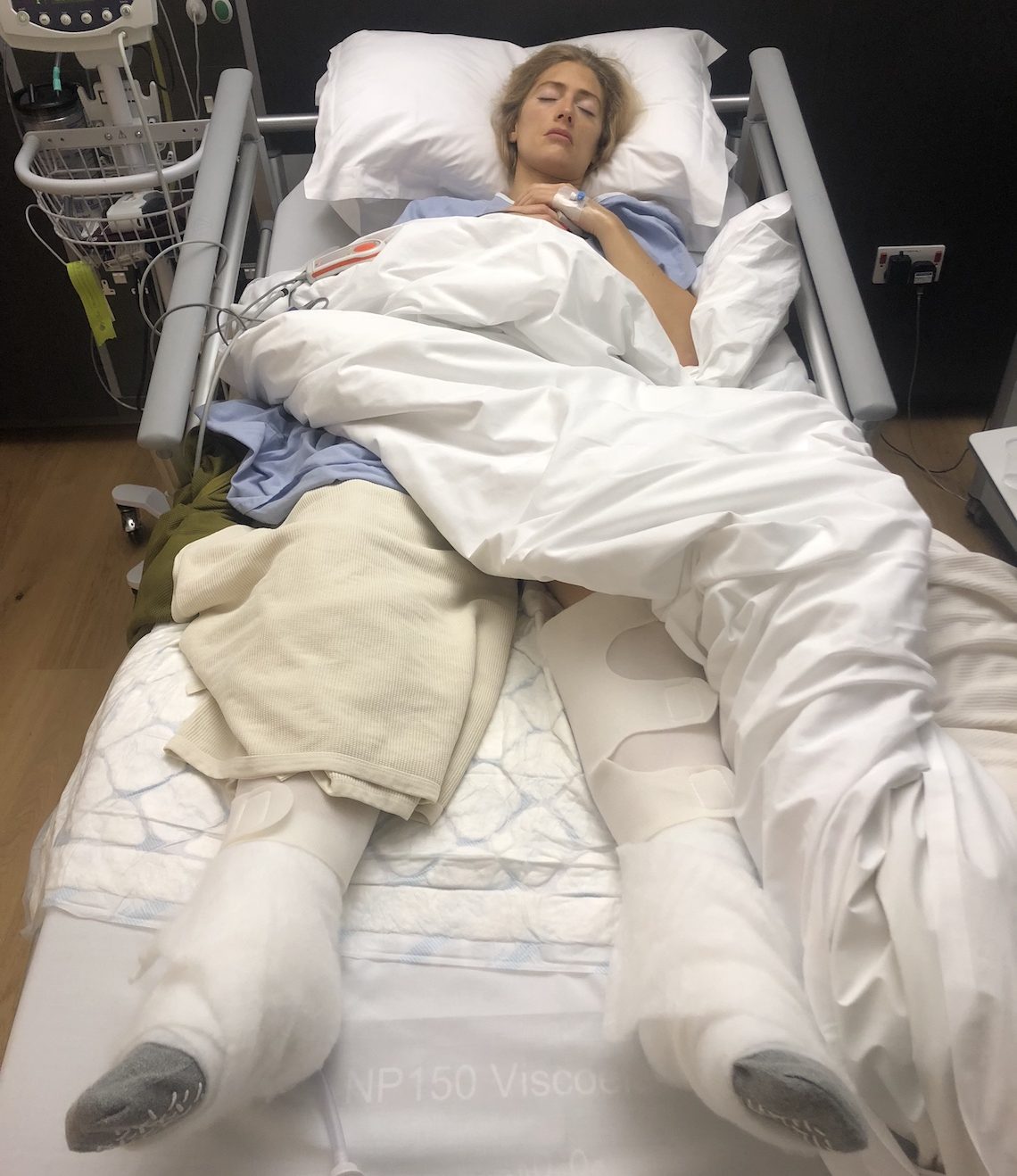 “When I finally got treatment, my recovery was a bit of a rollercoaster. They’d tell me I was doing alright but then I’d hurt and I knew it wasn’t right, so I’d go back and do more tests and they’d spot something else that they’d missed. Then I’d be back in for more surgery.”

Despite enduring several years of reconstructive surgeries and painful rehabilitation, Vanessa admits, perhaps surprisingly, that she wouldn’t change anything because it was that accident that led to her pursue her motorcycling dreams and the creation of The Girl On A Bike.

She says: “If you could take me back to two minutes before the accident and say that I could wave a magic wand and make it not happen, I wouldn’t change a thing. It’s a journey I needed to go on. In that moment life as I knew it changed.

“The idea to start motorcycling came because I was no longer able to cycle to work and having to drive into central Oxford each day was absolutely killing me. So, one Friday night after a couple of gin and tonics, I decided to get a motorbike. I was on the path to becoming a biker.”

Vanessa already had a full motorcycle licence after passing her test a few years previously but hadn’t ridden since. So, she went out that same weekend and brought a Suzuki Bandit 600, along with riding gear, and rode to work the following Monday morning.

It wasn’t long before she was well and truly smitten with life on two wheels and soon added a Harley Davidson to her garage, after renting one with her husband on their wedding anniversary.

Vanessa says: “After just one afternoon I needed that Dyna Street Bob in my life. It was one of the best decisions I’ve made as far as my mental health recovery from the accident is concerned.

“With mental health issues, there are so many different causes and angles, and it’s the side of recovering from an injury that people don’t normally talk about. When I was no longer able to do all the sport I used to do, I didn’t really see the point in doing much at all. 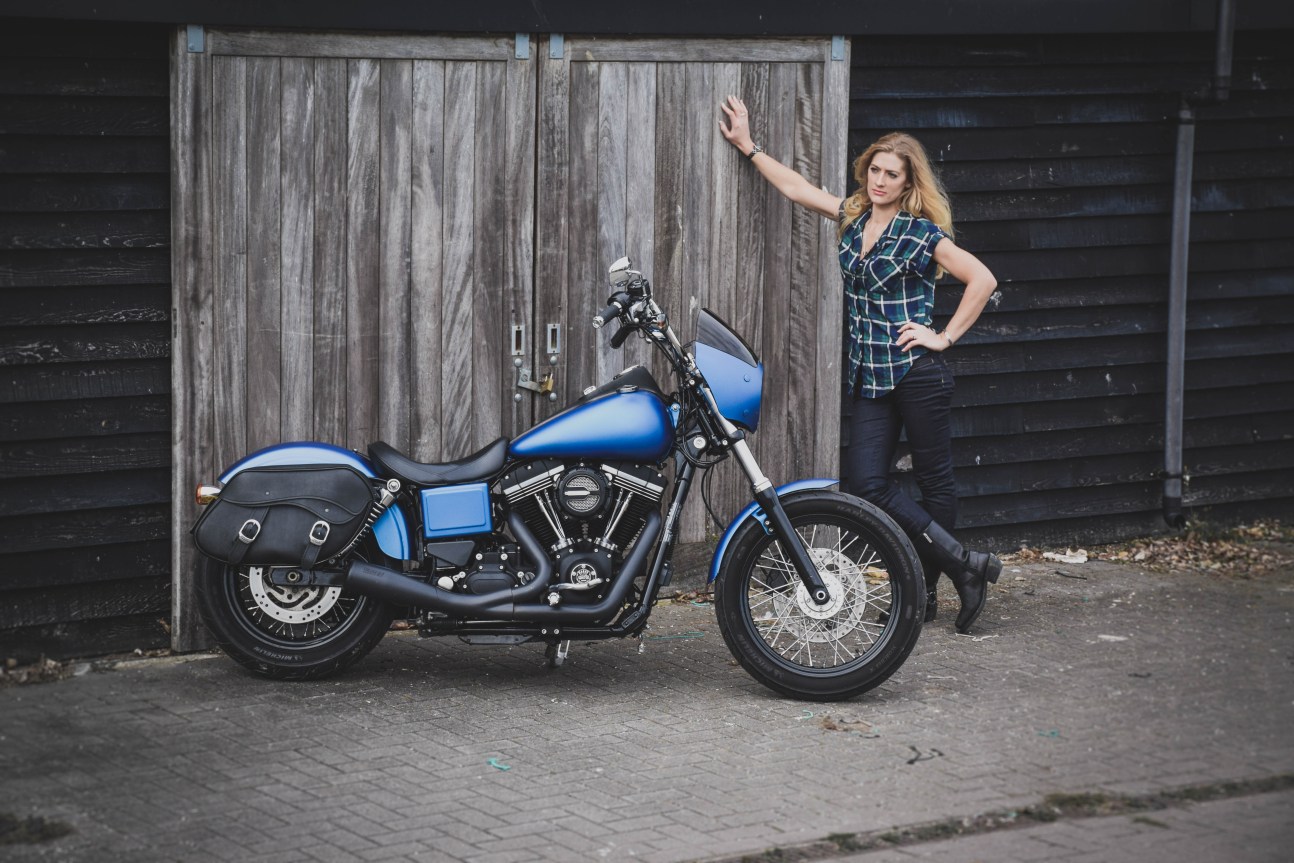 “The Harley gave me a sense of adventure without a physical requirement. It became a new way to experience adventure and freedom, the adrenaline, the wind in the hair, without needing to actually do anything except sit on what was essentially a sofa on wheels.

“I still remember the first time we went motorcycle camping. It was probably only six miles from the house, which was about as far as I could go at the time, and it was incredible.

“Yeah it was nothing compared to some of the stuff that we’d done previously but that didn’t matter because, from where I had been mentally and physically, it was huge.”

Despite enjoying her time on the Harley, Vanessa continued to miss the thrills and adrenalin rushes of her pre-accident days when she could regularly be found mountain biking, kite surfing, snowboarding, and rock climbing.

She says: “I’d become addicted to the adrenaline and the endorphins and I’ve always wanted that back. Just because my body is slightly reconstructed doesn’t mean I can’t do that.

“So, after my third surgery, I woke up one morning, turned to my husband and said: ‘Can I get a dirt-bike?’ I don’t remember seeing dirt bikes, reading about them, or even seeing them on TV. I still have no idea where it came from.” 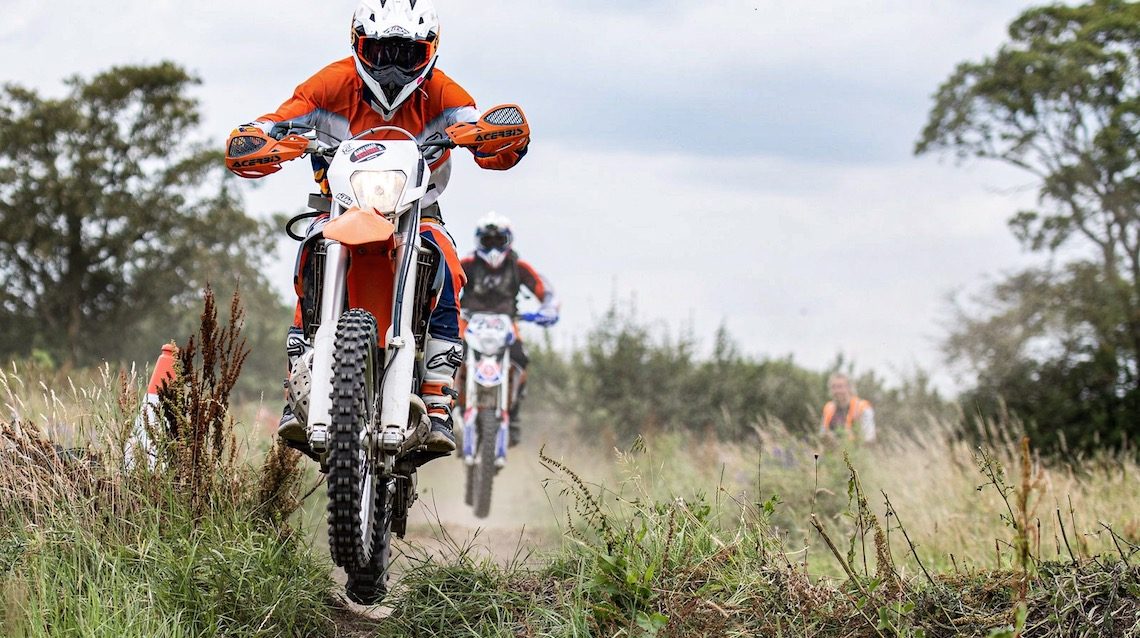 Once again, Vanessa didn’t hang around and she went out and brought a Yamaha WR250F as soon as she could despite not being well enough to ride it. However, the bike became an inspiration as she struggled through months of physiotherapy and rehabilitation.

“It was five months until I could sit on it. It was in the conservatory and it became something to focus on when I couldn’t be bothered to do physio, or when my body just hurt too much. It was my long-term goal. I was going to go greenlaning on that bike.

“I still remember the first day I could ride it vividly, after my doctor signed me off. My husband and I only had the one bike between us, so one of us was in the car. We’d discovered some byways that we could ride close by, so we each started at the beginning and the person in the car would drive round to the other end.

“I was so overwhelmed by how horrifically hard it was but it was amazing, and we quickly realised we needed two bikes.” 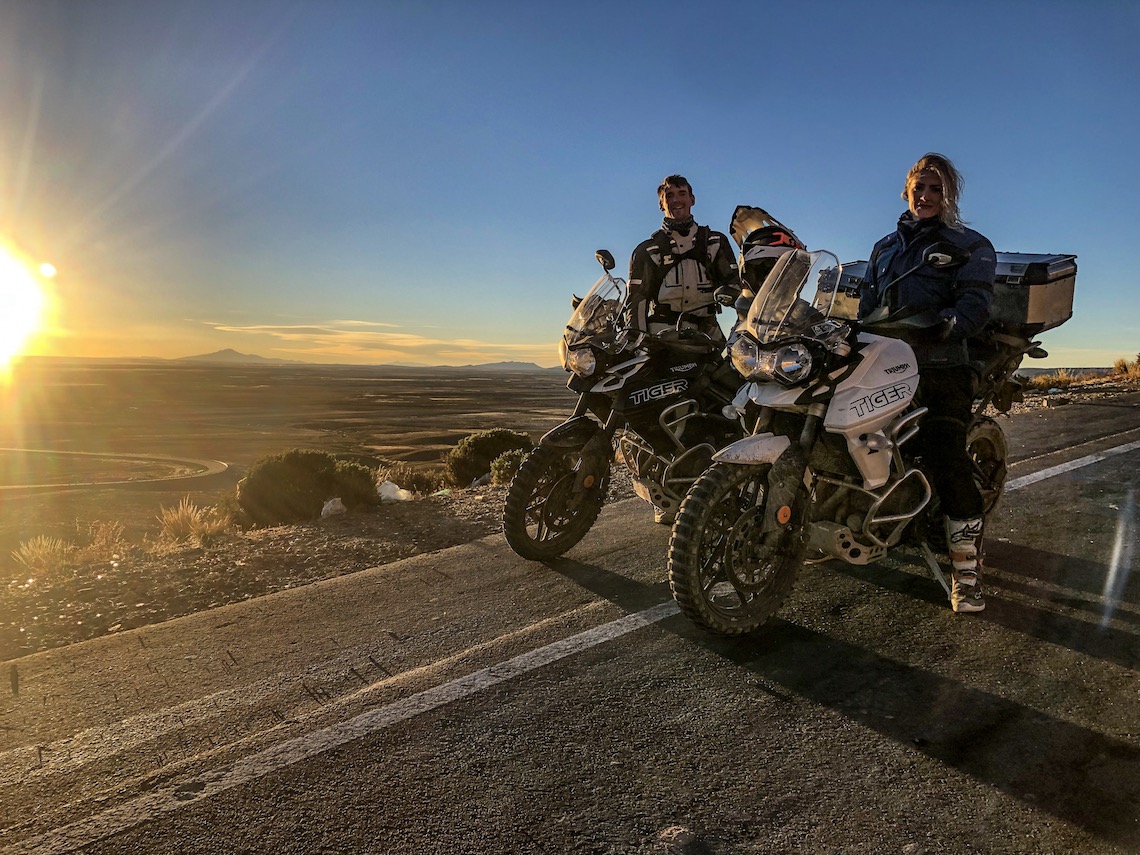 Greenlaning provided the thrills Vanessa was looking for, and over the next few years, she pursued her new passion as often as possible in between further reconstructive surgeries on her hip, and the painful rehabilitation that followed.

Throughout, she regularly shared her experiences on and off the bike on Instagram, Facebook, and her own website, growing a following of more than 100,000 people inspired by her courageous story.

Eventually, greenlaning simply wasn’t enough to satisfy Vanessa’s thirst for adventure so, after being egged on by her riding mates, she entered her first enduro race despite not being sure if she was a good enough rider to compete.

She says: “Five metres from the start-line there was a thigh-high plastic waste tube that you had to ride over. There were spectators everywhere, I was the only girl on the start line and I honestly thought I was going to die…

“I got straight over it! At this point I was thinking, oh my God, I can do this. I started to realise the extreme sports adrenaline that I used to love could massively come from motorbikes.”

Inspired by the ABR Festival

With her love of riding off road cemented, it was only a matter of time before adventure biking caught Vanessa’s attention, and the 2019 and 2021 Adventure Bike Rider Festivals proved the perfect opportunity to discover more.

“That (the 2019 Festival) was the beginning, it really was. I especially enjoyed the Little London Enduro Track. I just went around and around until people must have thought I was bonkers.

“At the festival, I was able to ride more adventure bikes than I had ridden previously. Over double in fact. I’d ridden three beforehand and tried five at the festival. 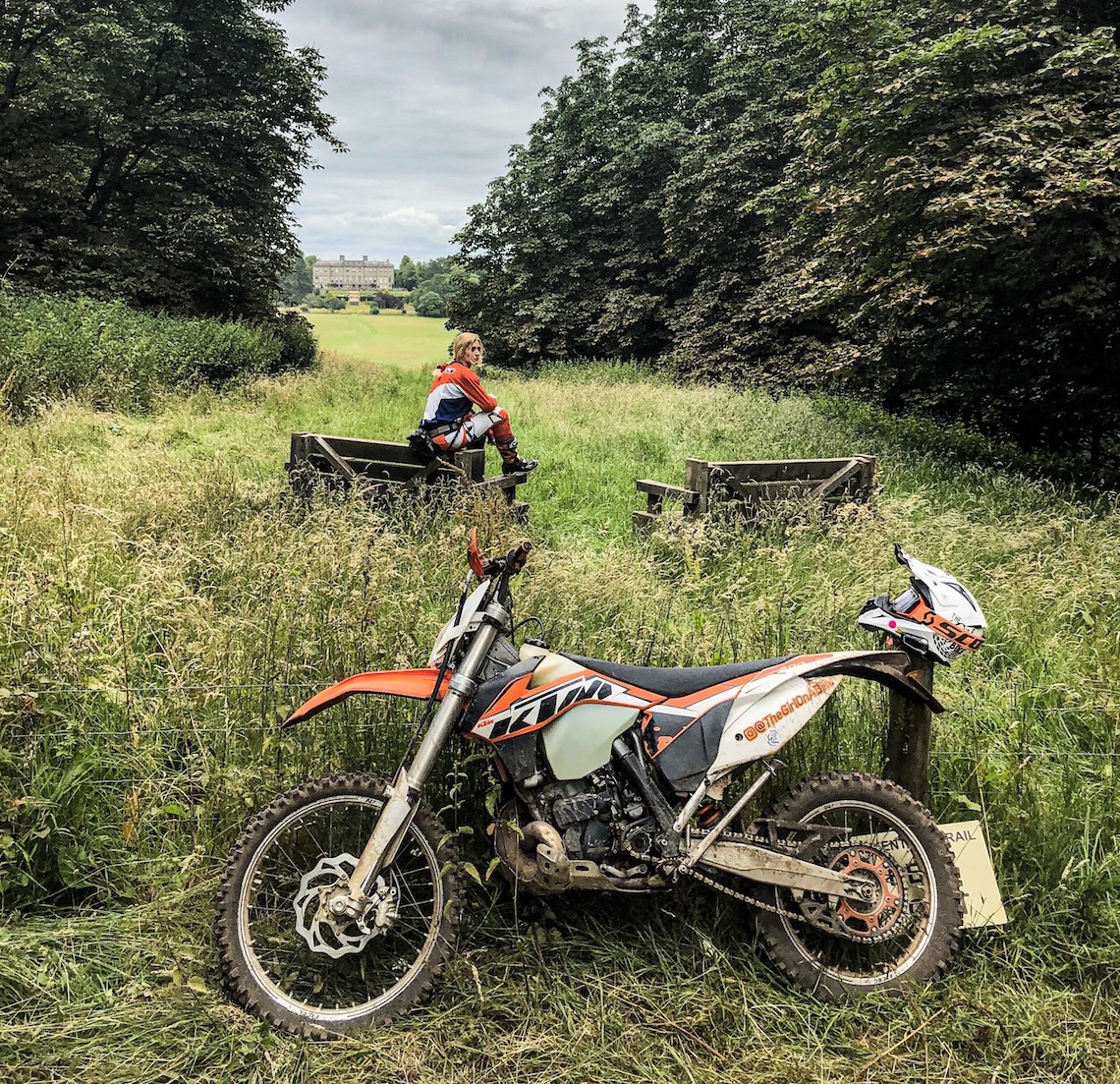 “It got me more into off-roading and solidified my belief that the big bikes are a lot more capable off-road than you think.”

After six years, seven surgeries, and countless months spent in recovery, it was Vanessa’s love of motorcycling that helped her find the courage and determination to endure and overcome her injuries. She is also proud of the fact she has helped inspire others to pursue her two-wheeled dreams by sharing her story on social media.

Join Vanessa Ruck, aka The Girl On The Bike, at the 2022 Adventure Bike Rider Festival

Vanessa will be hosting the Masterclass Stage at the 2022 Adventure Bike Rider Festival, 24-26 June 2022. There, she’ll be bringing you a variety of useful and informative sessions from experts in various fields of motorcycle travel and adventure. From classes on changing tyres on the road to how to find green lanes, you’ll find it all on the Masterclass Stage.

We’d love to see you there, so we’re gifting you a £15 saving with a discounted ticket to the ABR Festival, meaning you can get a full weekend ticket with camping included for just £114. But don’t hang around because they will sell out soon.

Guarantee your place at the largest celebration of adventure motorcycling ever held in the UK by getting your ticket today. Buy your 2022 Adventure Bike Rider Festival tickets HERE.