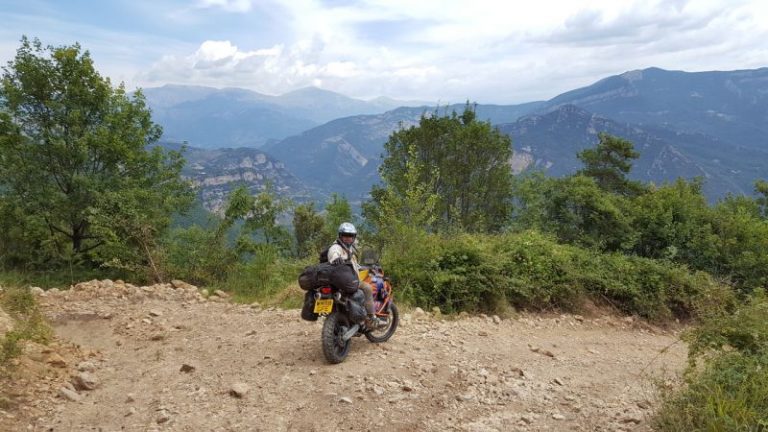 We all dream of jacking in the job, leaving our cares behind and setting off around the world. However, it can be hard to do this with real commitments to spouse, children and building societies.

That’s where Mini Mondo comes in. Conceived by Austin Vince as a five-day blast of pure Mondo mayhem, this bespoke wilderness project is now in its third year. It’s rather odd to have an organised tour conceived by someone who has issued many a fatwa against organised tours, but there is wisdom behind the madness, as Austin explained to ABR. “At trade fairs, shows and events, I am besieged by folk who’ve seen my films, like the sound of it, but claim they haven’t got the skills, budget or time for a decent motorcycle adventure.

Immediately, I punch them in the face and then whilst they are concussed I enter them into a week of Mini Mondo. By the time they regain consciousness and have adjusted their clothing, it’s too late. Six months later they are halfway up a mountain in the Pyrenees, preparing a tenderloin steak fricassé on a roaring camp-fire and already on their third orgasm of the day.” 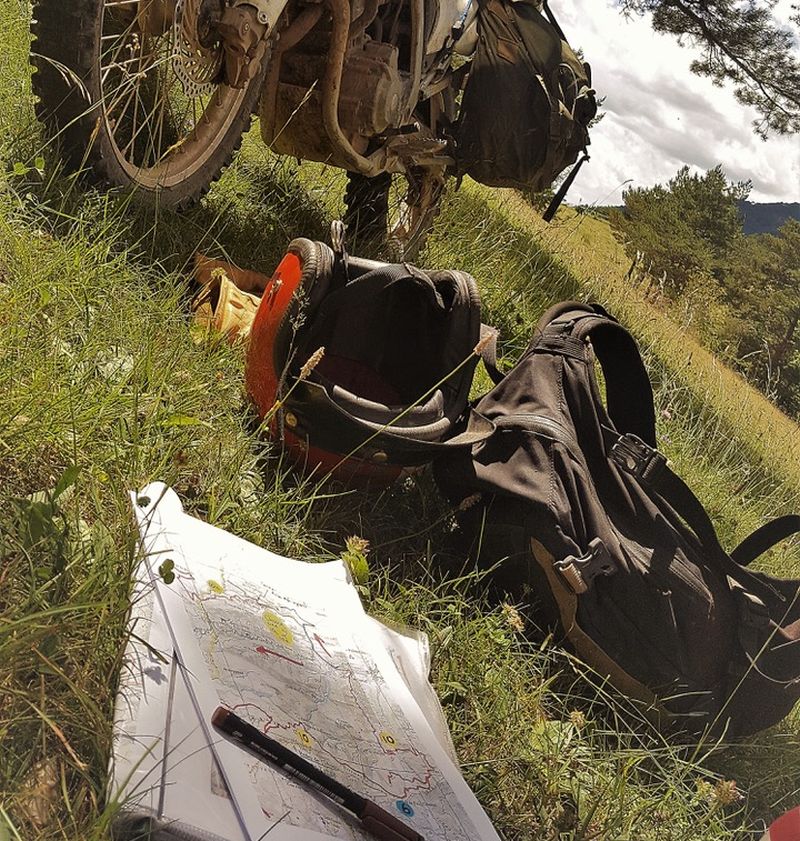 Austin is nothing else if not confident of his ethos. All Mini Mondo members are sworn, by a blood oath, that they will never again attempt to join one of his trips after their first iteration. He is on a mission, and that mission requires evangelists, apostles and emissaries. Once a rider matriculates from the Mondo Academy they are sworn to lead their own trips with a bunch of pals. Vince is trying to change the face of modern motorcycling by making trail riding, rough camping and self-catering the new ‘normal’. And it would appear that it’s working.

As well as the Mini Mondo project being firmly touted as a ‘warm-up’ for folk about to take on that much hoped-for, ‘big’, around-the-world expedition, it is also, quite simply, terrific fun for riders who have zero intention of doing such a thing!

Weirdly, the amount of gear and preparation needed for an intense week in Spain is pretty much the same as the kit needed to go off for a year. One thing’s for sure, Mondo members are shocked at the high quality of life they enjoy on the hillsides with such a small amount of exped clobber. The famous four inch-thick catalogues of the accessory-mongers do seem rather superfluous once you have gone ‘full Mondo’. 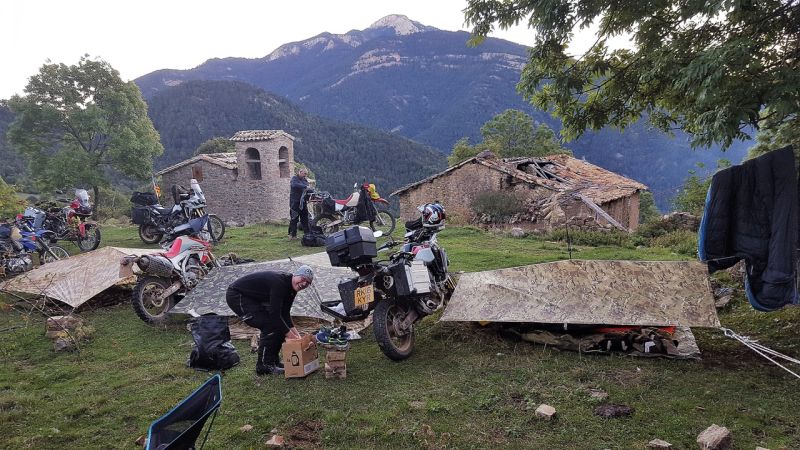 In this age of the internet, the blog and the forum, where the individual is the new Messiah, here comes a project that reverses that trend, as Austin explains: “Back in ’95 and indeed, 2001, Mondo Enduro and Terra Circa were pretty ambitious projects for a rag-tag bunch of clueless goons who were unsupported and out of their depth even before they reached Dover.

However, with all the ‘wrong’ equipment, small bikes, no internet or mobiles, we absolutely executed the plans that we had fantasised about. We set ‘fantastic’ targets and achieved them. How? By being amazing riders or tough guys? Not for a second. What we did really well, was to forget about our personal ambitions and put the team’s target as top priority. This sounds pretty obvious, but it’s amazing how many people simply, in this day and age, cannot do that.” 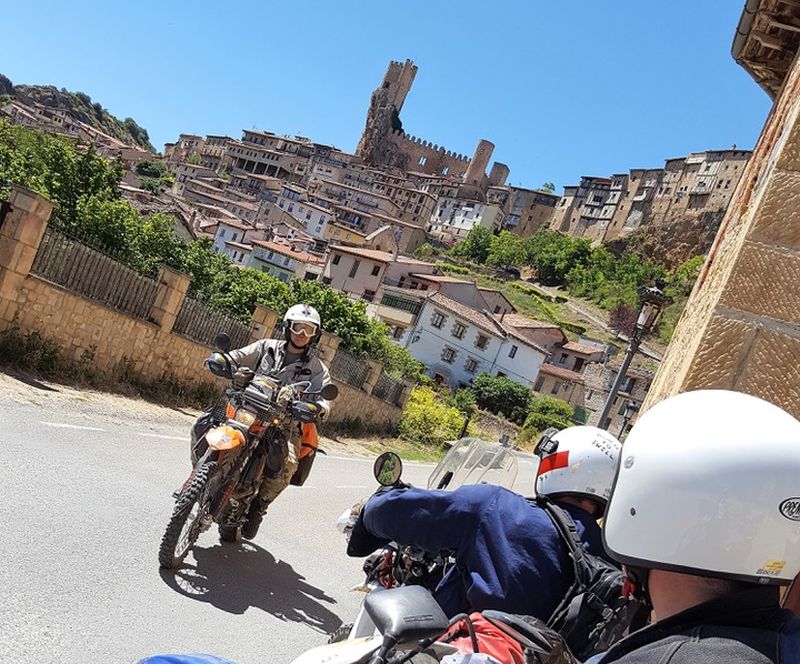 On Mini Mondo, obviously, thousands of miles away from the barren taiga of Siberia, the deserts of Chile and the neglected roads of the Congo, there is one success that CAN be replicated from the actual Mondo Enduro: the teamwork. Instead of ‘surrendering’ yourself to the project, being a concession, a chore, a negative, it’s the total commitment to the group that ends up being the intoxicant the people take away from the hills. Sure, there’s always a bit o’ campfire boozing, a crafty fag, or the thrill of the trails, but it’s the intense ‘togetherness’ that people are talking about a year after their return and it’s this that Austin is really promoting:

“I’ve been in sports teams all my life, led expeditions up mountains and been through Sandhurst, but I never reached teamwork Nirvana until the last few months of Mondo Enduro in 1996. That was the Johannesburg to London section. I had no idea that one being in a team didn’t mean a thing unless the team thought ‘as one’. Adventure motorcycling has changed my life, for the better. I want to share the intensity that we had back in ’96 and if you’ve only got a week, you can still be part of the gang because I’ve got just what you’re looking for.” 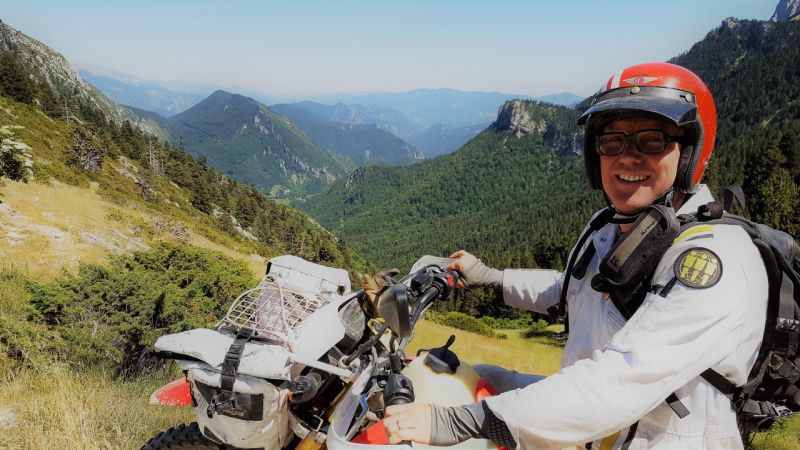 How to do a Mini Mondo tour

Mini Mondo costs £949. It starts and finishes in Northern Catalunya. You bring your own bike, whatever that may be. Austin and Dai (his assistant guide) provide all the food, booze, petrol and the hotel on the last night. All equipment (including your tarp) is laid on, but you bring your own sleeping kit, wash-kit, waterproofs and smile.

In 2018, there’s one in the middle of June and one the last week in September. See www.austinvince.com

Rough camp – no tents – only tarps, slung between bikes.

No gas stoves – all cooking done on fires.

Self-catering – real food, cooked fresh every meal, by you. Nothing processed or dehydrated.

Daily diary – everyone contributes to the daily entry, read aloud to the crew after supper.

Commitment – everybody does everything. There’s no need for a support team because we support each other. Everyone gets stuck in and works hard as per the roster of tasks.

No personal kit – pretty much just the clothes you stand up in. Everything else you carry is a group asset and that means… 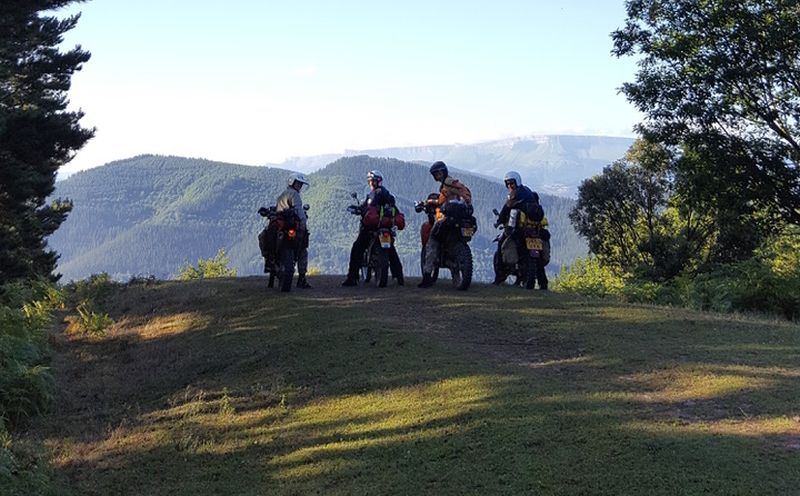 What they say about Mini Mondo:

“It’s about the team experience. Forget egos and job titles, they are strictly off-piste. Austin’s finely tuned team-building system is a gem, everyone working together to reach a common goal. It’s invigorating to meet strangers, work and ride together and then become best friends who you can rely on after just five days. Nothing short of a miracle. Campfire cooking with real food stimulates heart and soul, with conversations ranging from “The creation of the Earth” to “Where can we buy Cointreau?” the tipple of the trip! Going ‘low tech’ is the Nouveau adventure for me.”
Ian Worthington, Managing Director of Kapitex Healthcare Limited, 51, Honda XR400