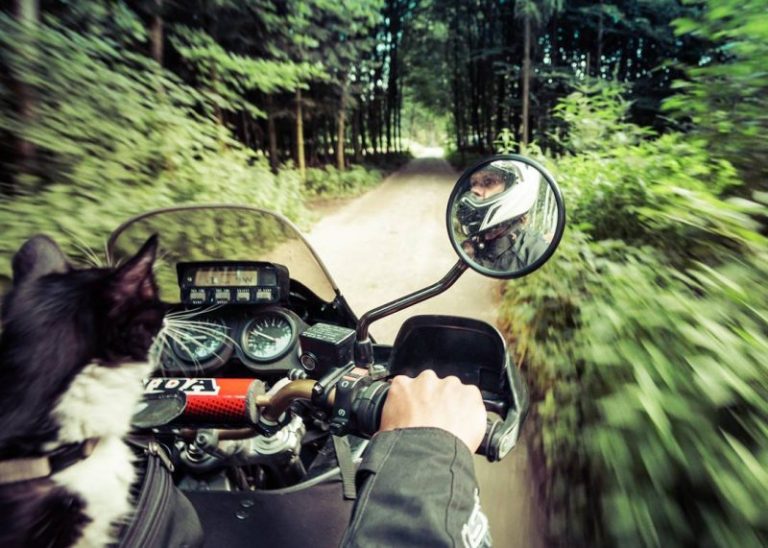 Martin Klauka quit his job in logistics and bought a motorcycle to embark on an incredible long-distance road trip from Germany to Dubai. However, he wasn’t alone. 31-year-old Martin travelled with his rescued cat, Mogli.

The pair set off on their journey from Rosenheim, Germany on 24 August 2017 on his Honda XRV 750 Africa Twin motorcycle. Their route took three months and saw them tick off 12 countries on their bucket list including Austria, Slovenia, Croatia, Bosnia, Montenegro, Albania, Macedonia, Greece, Turkey and Iran.

In a recent interview with Dubai’s Khaleej Times, Martin explained how he rescued his cat, “I was in Morocco on a road trip in March 2017 when Mogli walked up to me. She was about two months old, frail and malnourished. I decided to take her with me to Germany on my motorcycle. It was better than leaving her on the streets to die. She was so sick her tail had to be amputated,” he explained.

When Martin set off on his motorcycle adventure, he didn’t have a set plan or route. He also didn’t know if Mogli would even stay with him on the trip. “She could just run away and find a better place.” He said. “Mogli usually sits in the tank bag in front of me. When I drive fast, I partly close the tank bag so that she come out on her own terms. Once I get over 40-50mph, she goes back into the bag and chills there. She even sleeps inside.” Martin explained.

However, travelling with a cat on a motorcycle wasn’t always plain sailing. Martin found that many hotels wouldn’t let the pair in, they have also been kicked out of many restaurants and shops. Sometimes, he had no choice but to smuggle Mogli in so she didn’t have to sleep outside. On a couple of occasions, Mogli wandered off for a few hours (as cats do) which really worried him.

When the Khaleej Times asked him what he’d learned on his motorcycle journey, Martin laughed and said, “I guess the word for ‘cat’ in many languages. Also, we met so many amazing people in our journey. Whenever we were in trouble, we always found people who were ready to help us, even though the thought I was crazy to take this trip with my cat. Some even wouldn’t let me pay for the fuel.”

The adventurous twosome are currently staying in Dubai. Martin is trying earn enough money so they can travel back to Germany by motorcycle together again. They plan to continue the journey by riding to India next summer. You can follow Martin and Mogli’s adventures by heading over to their Instagram page MotoMogli.