Six brilliant adventure motorcycling roads from across the globe 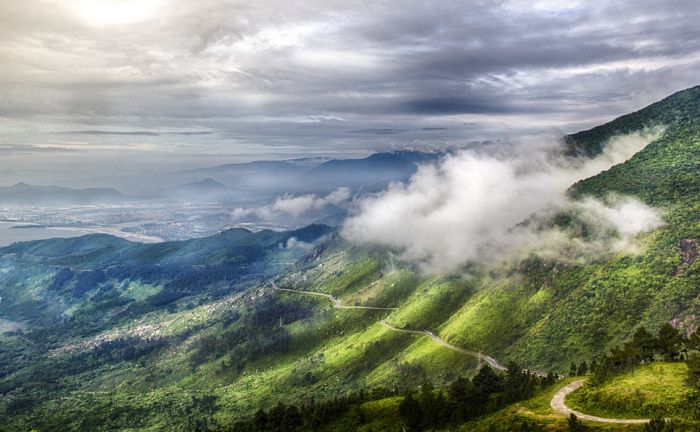 What are the best adventure motorcycle roads in the world? It’s a question we often ask ourselves and one that throws up a different list of answers each time we discuss it.

For every lover of the technically challenging switchbacks of Italy’s Stelvio Pass, there are those who find their biking zen on the wide expanses of the Dalton Highway.

Just as we all have our different outlooks on life, every rider will have their opinions on what makes the perfect motorcycling road.

So, we decided not to draw up a definitive list of the best roads in the world you’re likely to disagree with. Instead, we joined forces with world motorcycle travel experts Motorrad Tours to bring you six roads we would happily go back and ride time and time again. 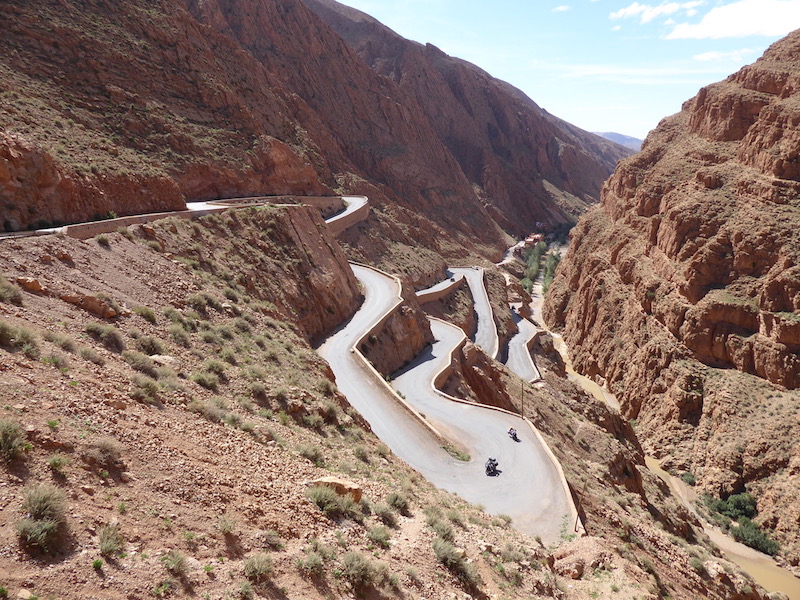 The Dades Gorge road starts from Boumaine de Dades on the N10 some seventy miles west of Ouarzazate and heads north as a twisting route for almost 30 miles before the tarmac runs out. In this space, the road is dramatic and contains ‘those’ hairpins so often photographed. It twists and turns along the sides of the gorge on sometimes poor, sometime pristine tarmac.

You will always meet some traffic although it is not busy and it is not a route for big trucks. In the riding season it’s almost guaranteed that you’ll meet some other bikes, mostly going to the top of the hairpin climb and coming back.  They are missing the best of the route.

If you are up for a challenge then keep going. The road runs all the way to Agoudal. Forty miles of dirt road. It is technical on a big adventure bike with a hard, rocky surface for the most part, along with some loose gravel hairpin climbs, some water crossings and a few sections of compacted mud.

There are sheer drops of several hundred metres and, as it is all single track, passing any oncoming traffic means stopping on the cliff side (not the drop side) and inching and squeezing past each other. It is not one to attempt on a big bike after rains and not at all in the winter. At its peak it is over 2,000m above sea level.

The reward? Almost uninterrupted two-lane black tarmac, with little or no traffic and just the occasional ford where the river runs over the road in winter and leaves sand, stones and rocks for the rest of the year. 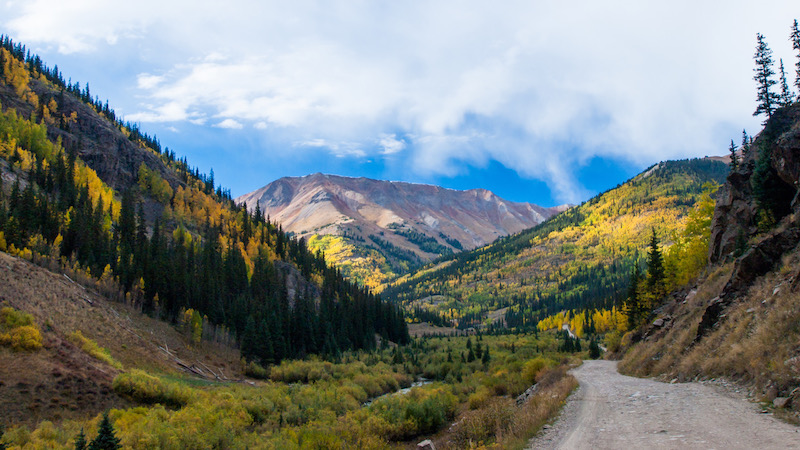 Originally cut into the Rockies in the 19th century, this circular route from Silverton to Lake City and Ouray was created for miners and mules to cart their ore. Riding it today, you can still imagine a mule and cart around every curve, and the only give away that time has passed are the seven abandoned towns scattered along the route. Ghost towns of the old west.

Engineer Pass, to the north, rises to 3,600m providing unsurpassed vantage points for photos of Uncompahgre and Wetterhorn peaks, towering more than 4,250m high. On the more southern route, Cinnamon Pass also tops out at 3,600m.

At these altitudes the riding season is short, so it’s June to September, or bring snow shoes. The whole of the 63-mile loop is loose gravel and rock with no tarmac in sight. If you are looking for hours of engaging gravel road with stunning views thrown in, then this is one for you. 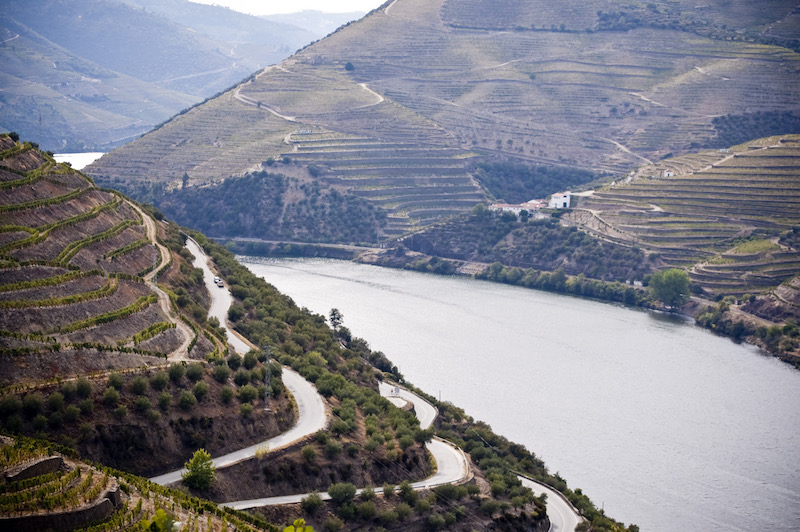 The Douro Valley in Portugal is sometimes known as the Enchanted Valley. A UNESCO World Heritage Site, it stretches from Porto in the west to the eastern edges of the country. Following the Douro River nestled in valleys lined with vineyards is the N222. An unassuming name for one of the best European roads that does not cross high mountains.

Its low altitude and warm Portuguese climate mean the riding season is much longer than those of its mountain competitors elsewhere in Europe.

You don’t need to start from Porto. Come inland to Castelo de Paiva and then head east. Navigation could not be simpler – follow the N222. The well-maintained grippy surface twists and turns as it tracks the Douro River as closely as it can. It is about 65 miles from Castelo to Peso da Regua, when you will be ready for a break.

Form here the character of the road changes for a while as it runs directly along the banks of the river, sweepers rather than twisties. That is until it turns away from the river and climbs through the vineyards with stone walls on one side and steep drops on the other. By Vliarouco the best is done. Turn back and ride it again – it is completely different in reverse. 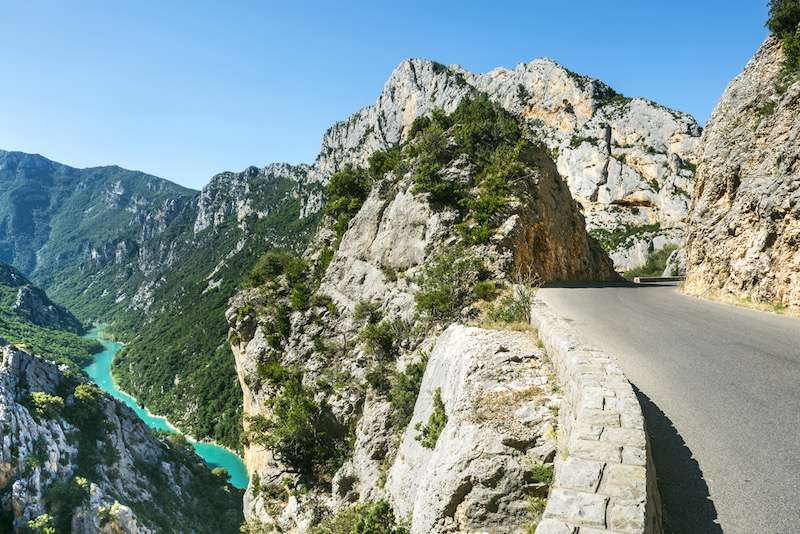 “Before I reached Grenoble they thought me a soldier of fortune. When I got there, I became a prince.” Those are the words of one of history’s most famous Frenchmen, Napoleon Bonaparte, when he spoke of his six-day march from the coastal town of Golfe-Juan to Grenoble.

Between 1-7 March 1815, along with a small band of loyal soldiers, the French commander trekked 200 miles through Alpine terrain, signalling his return from exile on Elba and the start of the Hundred Days.

While he would continue his march onwards to Paris, where he would reassume the throne of France and, eventually, a second exile after defeat at the Battle of Waterloo (this time to Saint Helena), the route he took over the first six days has been immortalised. In 1932, the Route Napoleon was inaugurated, and today it’s one of France’s most thrilling and enticing rides and, depending on who you ask, Napoleon’s greatest contribution. 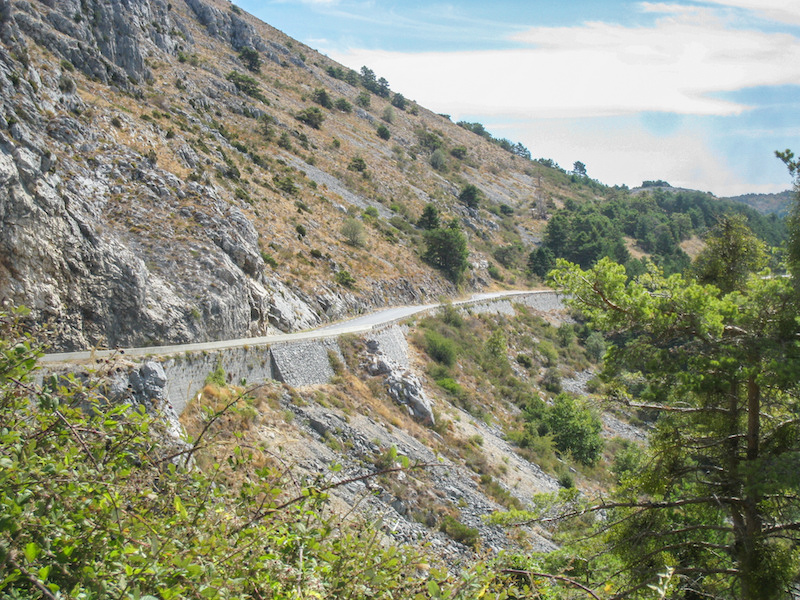 Not only is this route one of historical importance, it also takes you through the incredibly beautiful landscapes of the Maritime Alps, the Alpes de Haute Provence, the Hautes Alpes, and Isère. Vast pine forests, jagged peaks, wide-open expanses and winding mountain passes combine to provide the visual rewards, while the smooth tarmac underneath your tyres ensures a dream ride.

For its length, the route is well marked by brown signs sporting the French imperial eagle, and due to its popularity, you’ll not be short of supplies or amenities along the way.

The 200-mile long route is rideable in a day, but you’ll want to take your time and savour the journey and also the chances to learn more about the historic route as you go.

If you’ve got the time to spare, it’s well worth taking a short diversion to the Verdon Gorge, often called the ‘Grand Canyon of Europe’. Here, the road takes you along a spectacular route with viewpoints into the magnificent valley that’s been carved out by the Verdon River over the span of a few million years.

Whether you decide to ride the route from north to south or vice versa, you’ll no doubt enjoy the ride, and when you’re finished you’ll be perfectly placed to continue onwards to the higher mountain passes of the Alps. 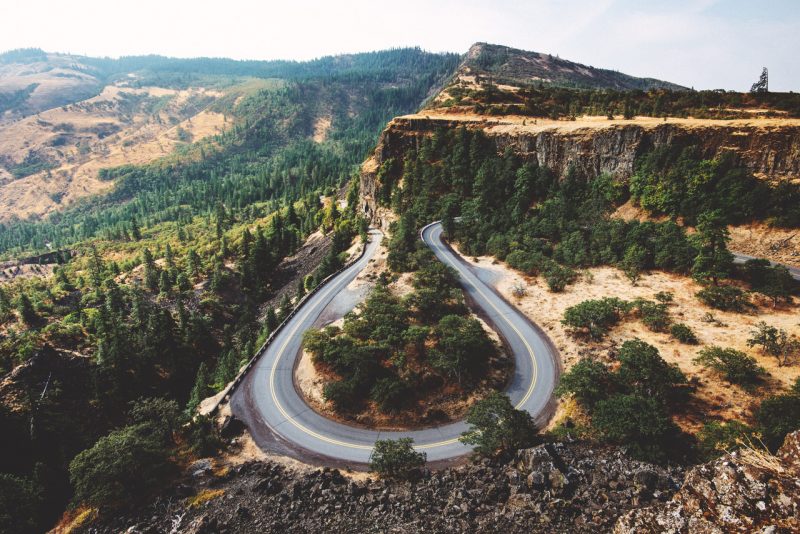 In 1803, Thomas Jefferson instructed Meriwether Lewis to explore the Missouri River and find “the most direct and practicable water communication across this continent.” Along with close friend William Clark, Lewis formed the Corps of Discovery Expedition and spent two years travelling from Illinois to the Pacific.

Join their route at Missoula and head west on US12 through forests and over the Lolo Pass.  You will enjoy endless sweeping curves as the route follows Lolo Creek, Lochsa River, Clearwater River and Walla Walla River. Nestled in forested valleys the route is well surfaced, with a scattering of fantastic small towns.

This route covers one of the most beautiful sections of the Lewis and Clark Trail as it winds through the Rocky Mountains of Montana, Idaho and Washington.  At times, the side of the road teems with steaming hot springs flowing down the hills along the way. Watch out for deer and mountain goats crossing the highway and also keep an eye on the fuel gauge, as there can be 75-mile stretches with no services.

The Hearthstone Bakery is a short detour off the route at Kamiah but worth the stop, as is Woody’s Bar and Grill in Dayton, a bikers’ haunt, and a good night out. A night out?  Oh yes, just this section of US12 is 350 miles of twists and turns, and is best appreciated over a couple of days. Just after Walla Walla you meet the Columbia River and the US12 comes to an end.

However, follow the north side of the river, switching south at the Bonneville Dam and you can ride the Historic Columbia River Highway into Portland to finish the ride. 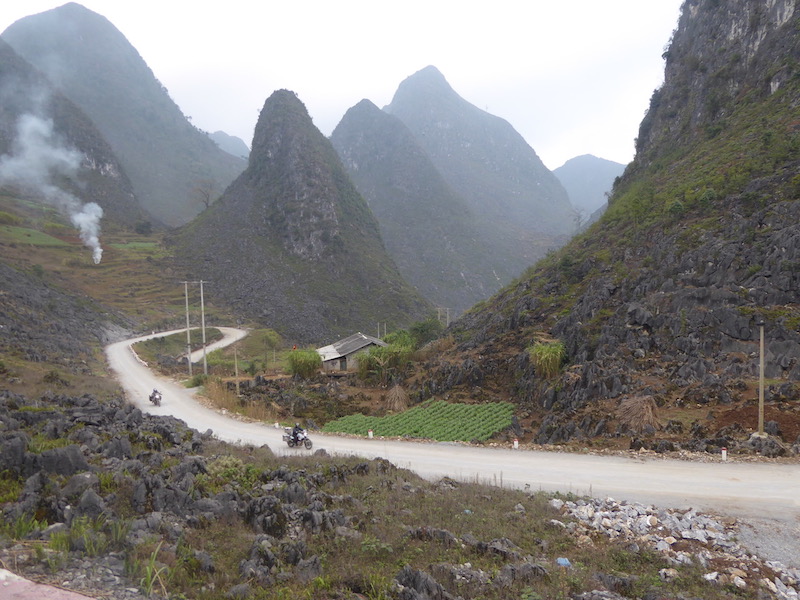 The Dong Van Karst Plateau is a huge geopark covering almost 1,000 square miles. It sits 1,500m above sea level in the very north of Vietnam and is formed from limestone. It dates back 600 million years, but the roads are not quite that old!

Climbing onto the plateau from Ha Giang, the road quickly narrows to a track and a half as it cuts through otherworldly rock fields and pointy mountains that look like they have been lifted from a sci-fi film.

It’s 100 miles to the town of Dong Van, with hairpins, sweeping valleys and ascents packed in one after another. But don’t go directly to Dong Van. Instead, go via the Lung Cu flagpole – Vietnam’s John O’Groats. The single-track route hangs on to the side of the mountains as you head toward Vietnam’s most northerly point.

The best is yet to come, however. Riding from Dong Van to Cau Bang immerses you in views that will keep breaking into the flow of your ride. The ride to Meo Vec and on to Tinh Toc is one of the most stunning rides anywhere. The Ma Pi Leng and Tinh Toc passes need riding twice; in fact, the whole route does. You need at least four days on the Dong Van Karst, two for photos and two to ride it, uninterrupted. 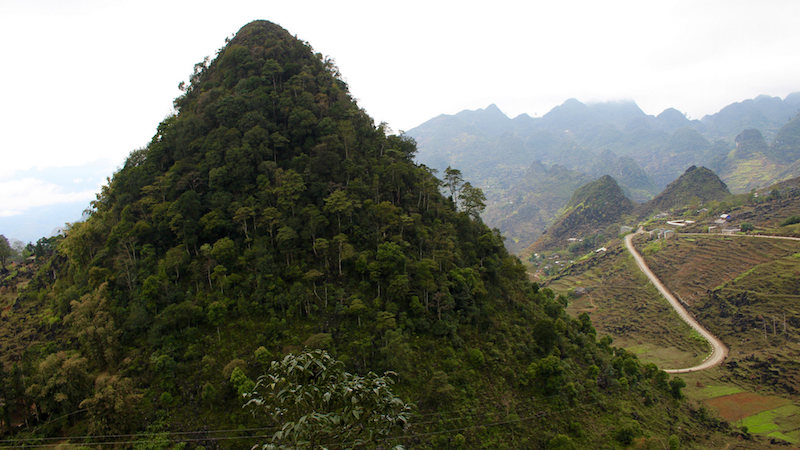 It’s best to visit in the dry season (October to January), as this is when northern Vietnam is at its warmest and driest. Come any later than February and the warm wet summer will arrive with temperatures in the 30s and occasionally 40s, with regular torrential rain. The route is incredibly twisty and challenging.

On a decent adventure bike you won’t see fourth gear much, if at all in 250 miles. For a remote region with extremes of weather the roads are generally in good order, but repairs and potholes are common and can catch you out if you let your focus drop.