Six of the best adventure biking roads on the planet 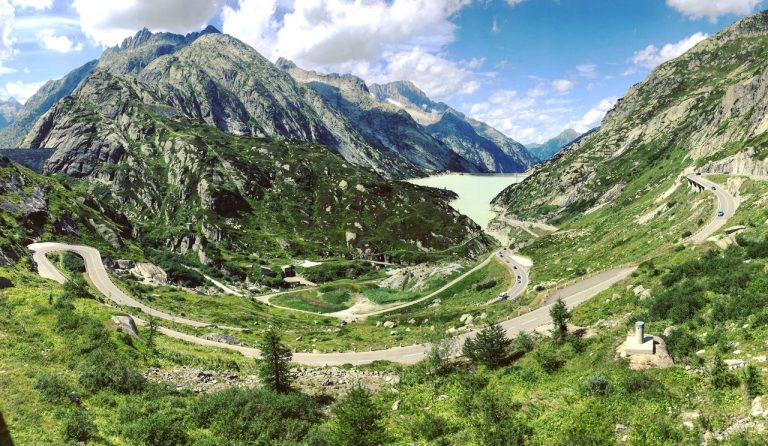 Here at ABR we’re constantly on the hunt for new and exciting roads to ride. Whether paved or un-paved, close to home or further afield, we want to hear about them.

To help us on our search for the perfect adventure biking road we teamed up with Motorrad Tours to bring you six of the world’s must-ride passes. Warning: you may find yourself booking flights to another continent after reading. 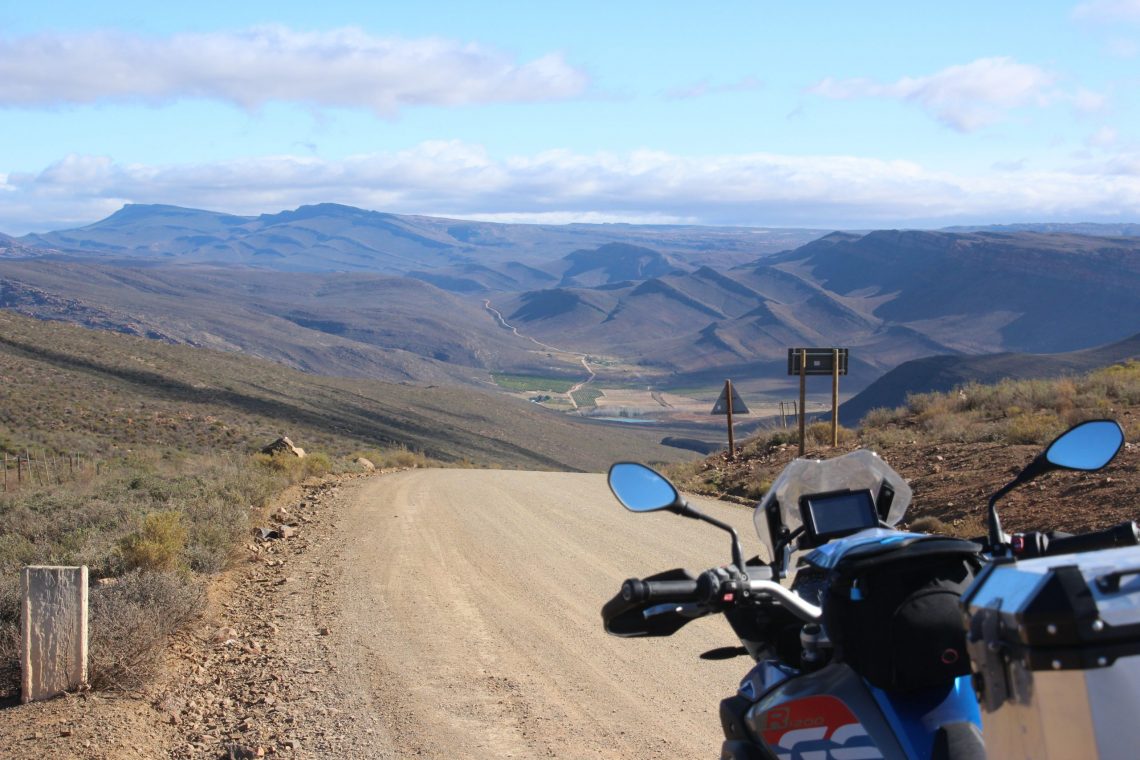 At 1,000m above sea level, The Utikyk Pass offers endless vistas of the unique Cederberg Mountains and is the gateway to the Northern Cederberg Wilderness Area.

From the south, the Cederberg Range is approached by riding on a remote dirt road north east of Ceres.

Turn west at a solitary farm store and then north to enter a surreal wilderness of sandstone peaks. The views and rock formations are spectacular. A night spent in the heart of the Cederberg Range allows you to enjoy the majestic solitude and huge night skies.

To find the pass, continue north on the same dirt road into the heart of the wilderness area. The Uitkyk Pass is the passage between the southern and northern Cederberg Wilderness. It also leads you to the Nieuwoudt Pass before descending into Clanwilliam and tarmac.

The dirt roads can be technical on a big adventure bike with hard, rocky surfaces along with some loose gravel and occasional patches of shallow sand. There are a few tight turns on climbs and descents, and it can also get quite slick after wet weather!

There is very little traffic and the roads are wide enough in most places for the occasional vehicle you may meet to pass without stopping.

At Clanwilliam, you can celebrate your achievement with a large slice of cake and a cup of the famous Rooibos tea at the Rooibos Tea House. 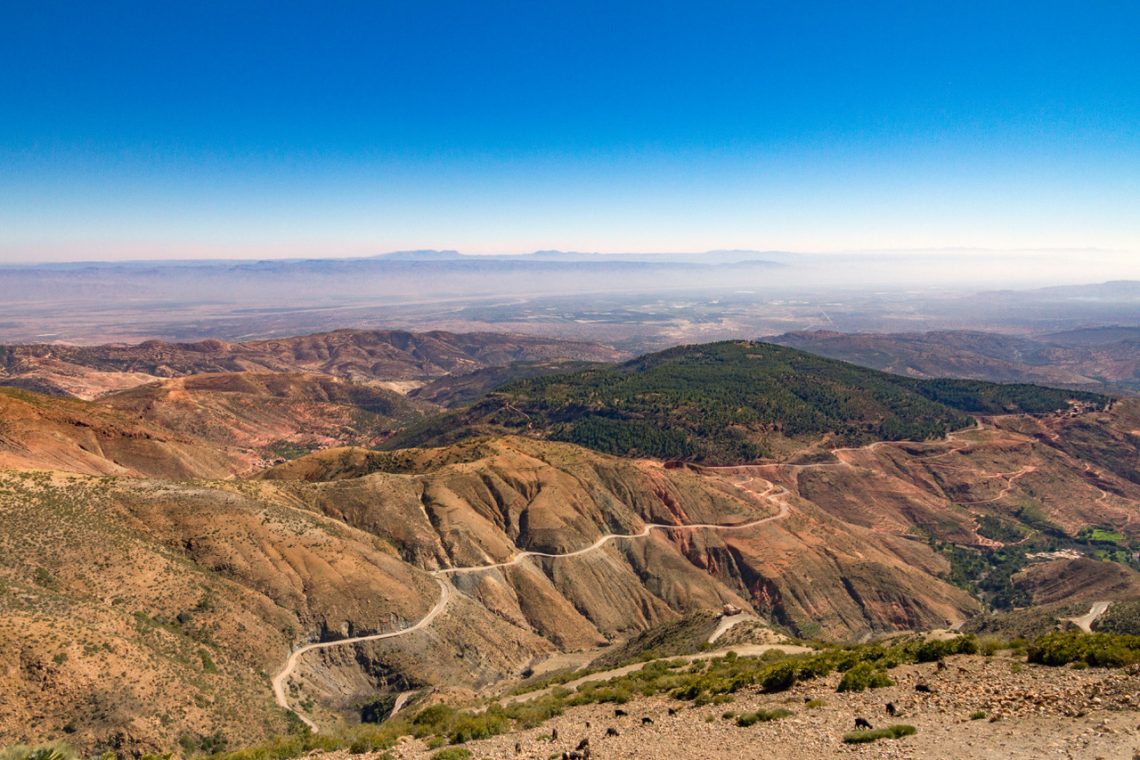 At 2,100m above sea level, the Tizi n Test is not the highest crossing of the Atlas, but it is the most fun. Technical, twisty, narrow and nadgery, it is a great ride.

There is no correct way to ride the Tizi n Test, north to south or vice versa, both are as a good as the other. From Talat to where it hits the main road to Taroudant is 45 miles of tarmac, though at parts referring to the surface as tarmac might be stretching things a bit.

Oftentimes, broken surfaces savaged by winter, where the pass gets covered in snow and ice, means gravel and potholes cover the road. Combine this with short retaining walls and big drops and this route is not for the faint hearted.

Talat is the last fuel stop until the N10 into Taroudant. In fact it is the last of pretty much anything except a few little shops in villages and two cafes at the peak of the pass. One at the very top and one just over the crest, the Belle Vue with, well, a Belle Vue.

The north side of the pass is more sweepy and open with some great surfaced sections and good visibility. The southern side is tighter and more technical at altitude until this dissolves into long sweepers before it hits the valley floor.

If you are looking for a gravel diversion, at the very peak behind the Tizi n Test sign is a trail that runs up another 500m to a radio tower. It is a dead end, but the views are stunning. 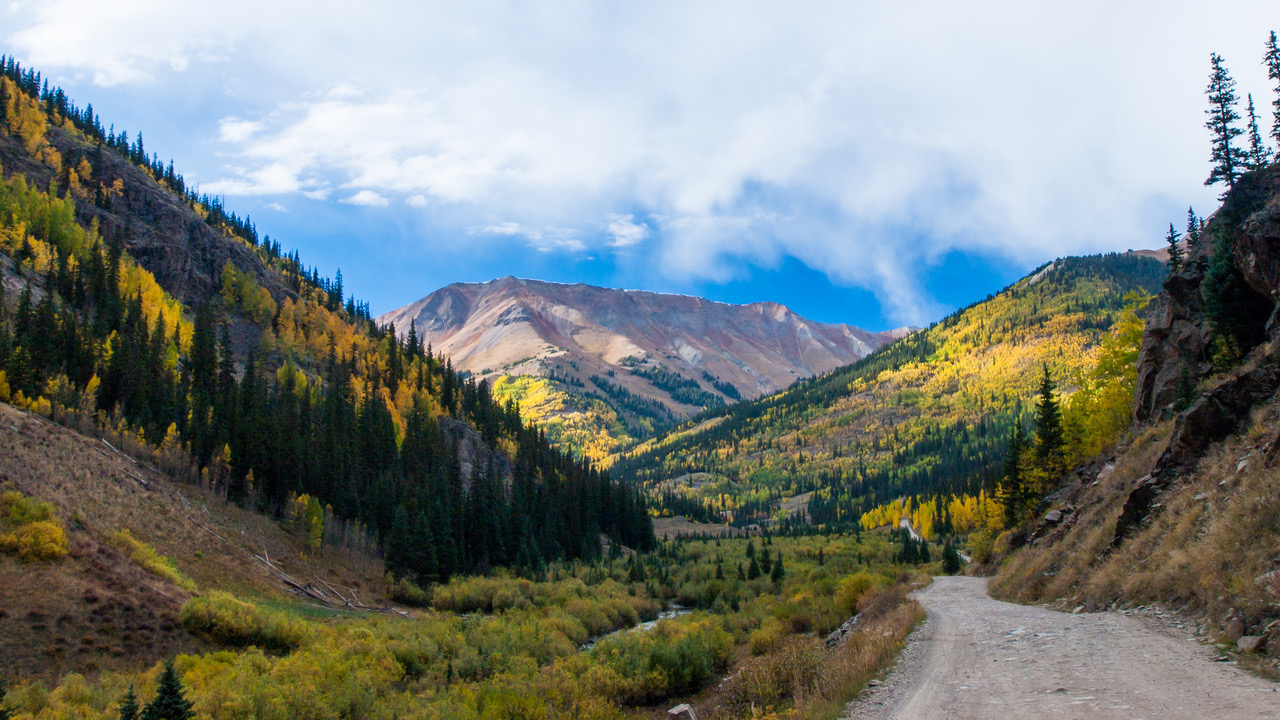 Seven ghost towns, two passes in excess of 3,500m and the ‘Switzerland of the USA’ at the end. What’s not to like?

Originally cut into the Rockies in the 19th century, this circular route from Silverton to Lake City and Ouray was created for miners and mules to cart their ore. Riding it today, you can still imagine a mule and cart around every curve, and the only give away that time has passed are the seven abandoned towns scattered along the route. Ghost towns of the old west.

Engineer Pass, to the north, rises to 3,600m providing unsurpassed vantage points for photographs of Uncompahgre and Wetterhorn peaks, towering more than 4,250m high. On the more southern route, Cinnamon Pass also tops out at 3,600m.

At these altitudes the riding season is short, so it’s June to September, or bring snow shoes. The whole of the 63-mile loop is loose gravel and rock with no tarmac in sight.

If you are looking for hours of engaging gravel road with stunning views thrown in, then this is one for you. 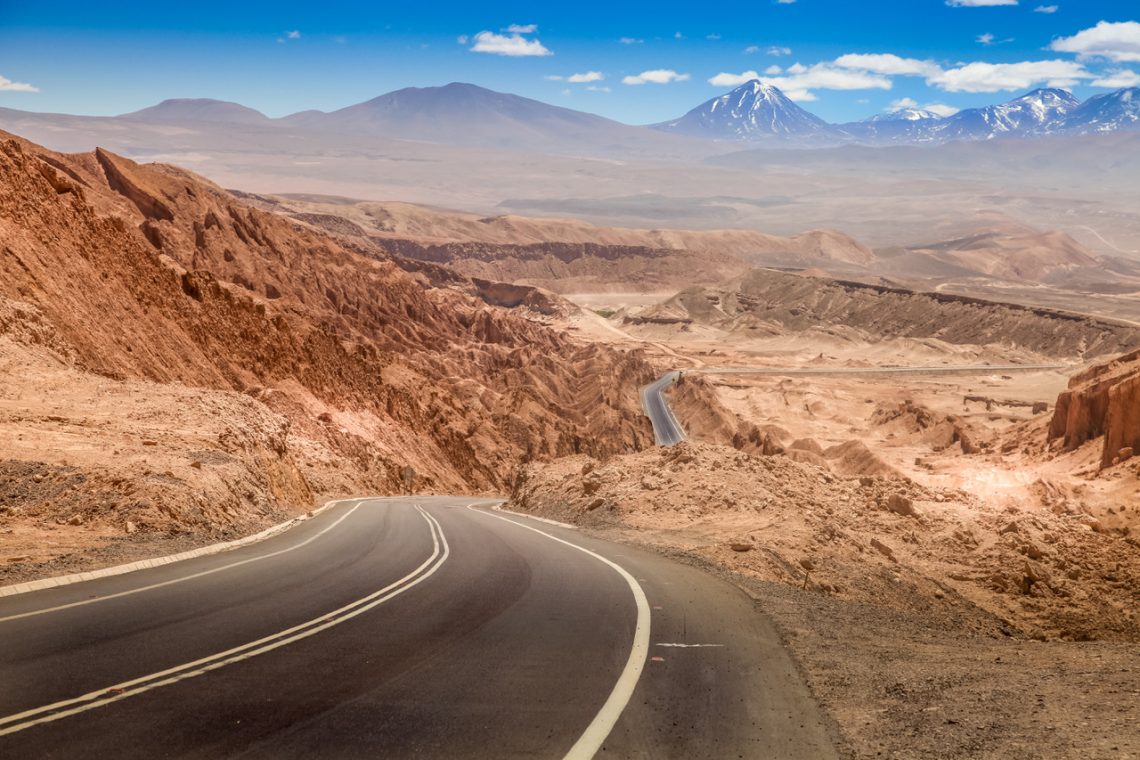 Valle de la Luna, or the Valley of the Moon if you prefer, is set in the Atacama Desert in Northern Chile close to the border with Bolivia and Argentina. The stone and sand formations, dry lakes and saline outcrops will have you believing you are on the moon. The only thing missing is a mouse nibbling at a piece of cheese, or an abandoned double decker London bus.

Is it really that reminiscent of another world? Don’t take my word of it – NASA used it to test the Mars Rover.

Before you leave make sure you have your camera, a spare battery and an empty memory card – you will need it. Oh, and some water.

Follow the 23 north west from San Pedro de Atacama and after nine miles there is a non-descript dirt road on your left with an easy-to-miss small stone pillar – Valle de la Luna. It is a national park and so there are opening times and a small entrance fee to pay.

Follow the main track and in a dozen gravelly and occasionally sandy miles you will arrive back at San Pedro. However, there are several side tracks to dead ends and back. Try them all – this ride is not about the challenge or the great corners, it is all about the scenery.

The 12-plus miles will take you hours. Especially if you stay for lunar sunset shots. If you do stay ‘til night, getting out of the park can involve nipping round a barrier as the park will be officially closed. And when you are done with the Valley of the Moon you are still in the Atacama Desert… 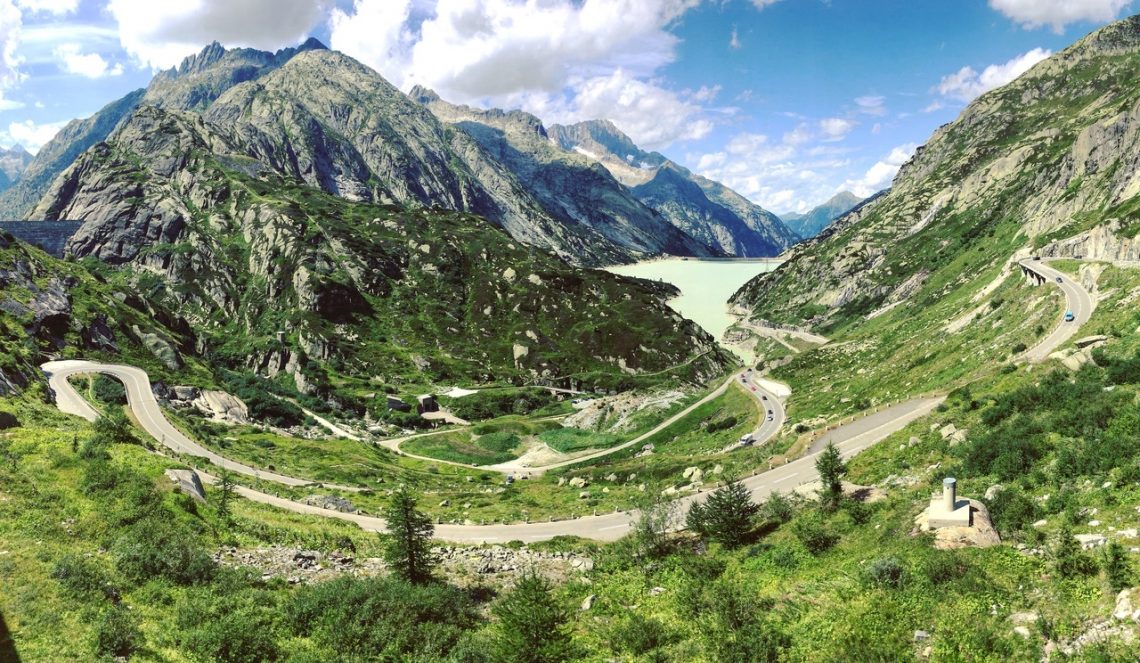 The Grimsel Pass forms part of the iconic Five Passes route in Switzerland. For those in the know, any of the five beat their more famous Italian cousin, the Stelvio Pass. Ride all of these in a loop and you have a perfect day on a bike

The Grimsel Pass runs north to south from Innertkirchen to Gletsch. Built in 1894, it peaks at 2,100m above sea level and is one of the highest paved routes in the Alps.

It is open, reliably, from early June to the end of September, but due to its altitude it remains cool most of the year and snow flurries are always a possibility.

As you climb, the views are stunning with lakes and reservoirs but as you get higher the landscape becomes more barren and almost lunar. The riding is, well, Alpine. Open, fast, swooping stretches are complimented perfectly by some action packed, steep, technical hairpin sections.

It is a riders’ delight and should be ridden in both directions if time allows. To complete your Grimsel experience, ride it as one part of a five-course Alpine feast. Susten, Furka, Gotthard, Nufenen and of course Grimsel. Link them together in a figure of eight and you have 150 miles of pure bliss. 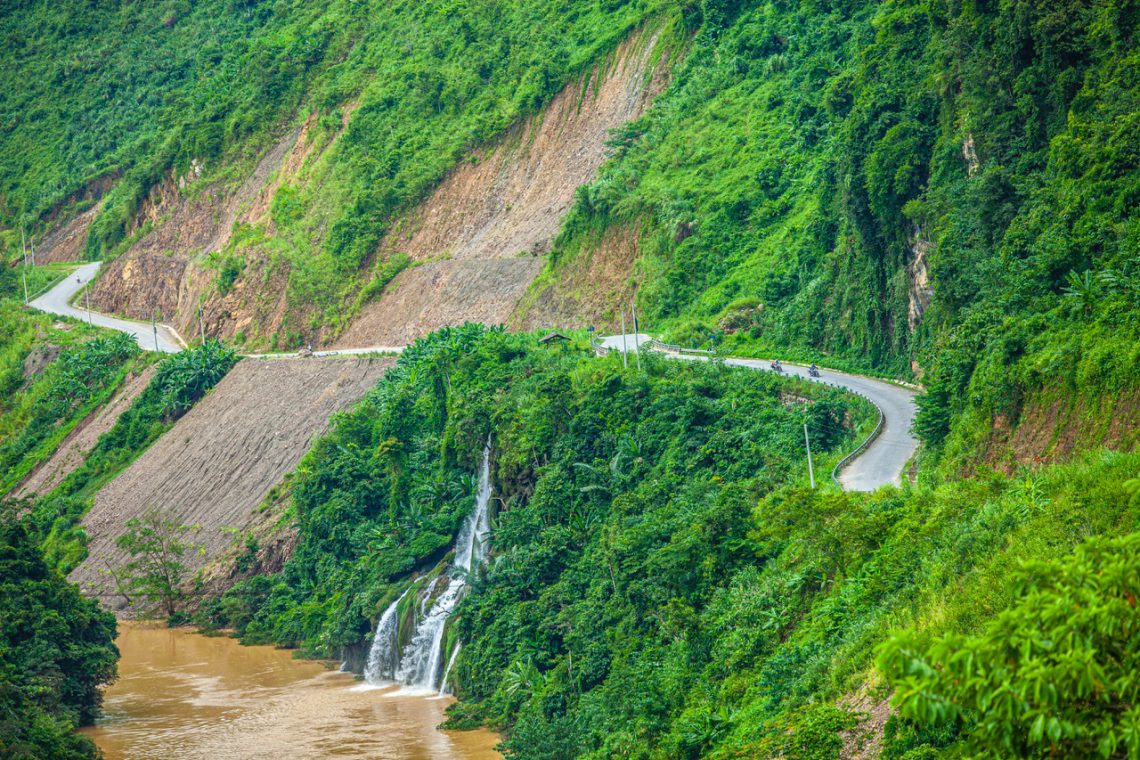 To the north of Dien Bien Phu in Vietnam there are a hundred miles or so of other-worldly mountains. Stretching serpentine-like through this spectacular landscape is the Nam Na River Road.

Leave Dien Bien Phu heading North on highway QL12. At Muong Lay, you cross the Black River which runs from China through Hanoi to the sea. From here, you are tracking the Nam Na River all the way to Phong Tho.

In all, it’s a little over 100 miles from Dien Bien Phu. Starting out through paddy fields, as the city is left further behind, the villages become smaller and the areas that can be farmed become scarcer.

Mountains of black rock tower on either side of the river valley. The road is a never-ending route of twists and turns, hairpins and climbs.

The Nam Na river section of the QL12 is only 500m above sea level, but you are constantly climbing or descending the valley walls, where the engineers have hewn the road out of the rock face. There is hand-pumped fuel available in the villages and a few small shops, but little else.

Why travel here to ride this epic road, apart from the obvious motorcycling delights? The rest of the day takes you over 2,000m to Sapa with its cloud scraping terraced rice paddies and dirt roads.

Want to ride these roads?

These are just some of the Greatest Roads you can ride with Motorrad Tours. Motorrad Tours is an independent tour operator, which specialises in taking the hassle out of the planning and logistics of riding the world’s greatest motorcycle routes, without taking away your freedom to ride and explore. Get in contact with the team here.

If you’ve ridden any of these roads we’d love to hear from you, send us a direct message on Facebook or email [email protected]