Meet Ola, one of the world’s pioneering female adventure motorcyclists 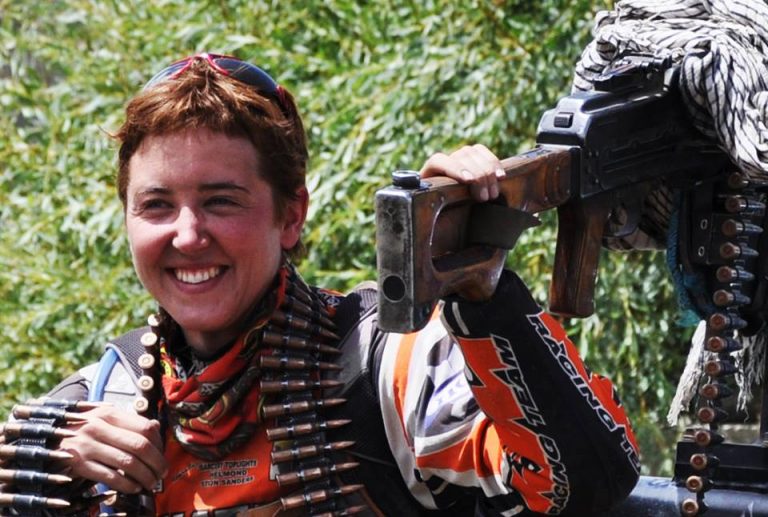 Alexandra ‘Ola’ Trzaskowska, 36, is probably one of the toughest women bikers I’ve ever met: she rides in the most extreme corners of the world, knows Central Asia like it’s her back garden, and leads women-only motorcycle tours in the Himalayas. She’s ridden in Afghanistan, Bolivia, and India; she’s constantly looking for new challenges and setting out on adventures all over the globe – and she’s also the driving force behind ADVfactory, an extreme motorcycle touring company Ola manages with her boyfriend Sambor.

Ola: It’s different for different people. Everybody’s got their own Everest. Every year, I go further; it scares me sometimes as I’m constantly overcoming my own fears, something that I used to be afraid of is now the new normal, but at the same time, I’m taking less risks when I’m riding. I think an adventure is something unplanned and unexpected; you have a destination, but you have no idea of what awaits you on the way. An adventure is something beyond your own limits.

Egle: When people first start riding, it seems the standard way they cut their motorcycling teeth is with a tour the Alps or trip to Spain. You got your license and…rode to Calcutta.

Ola: A motorcycle gives you the freedom to go further than any other means of travel. So when I got my first bike, it was only natural that it was simply another opportunity to go as far as I could. Besides, Europe isn’t changing anymore, it’ll be more or less the same within the next few decades, and it’s so accessible and easy that it’s doable even when you’re older and less able.

Central Asia on the other hand is changing a lot. I remember in 2009, it took me three days to ride one of the roads there; now, I can do it in six hours. It’s the same in South America. The roads are getting paved rapidly,every year there are new hotels, restaurants, guesthouses. Every time it seems there more people and more tourists. So now is the time to travel to all of these places, in the next 20 years most of them will change unrecognizably.

I missed this opportunity in Tibet: I went there seven years ago, and I was about 30 years too late, it has already changed too much. So I think you should take the advantage and visit the places which are constantly changing right now, and leave Europe and the USA for later. 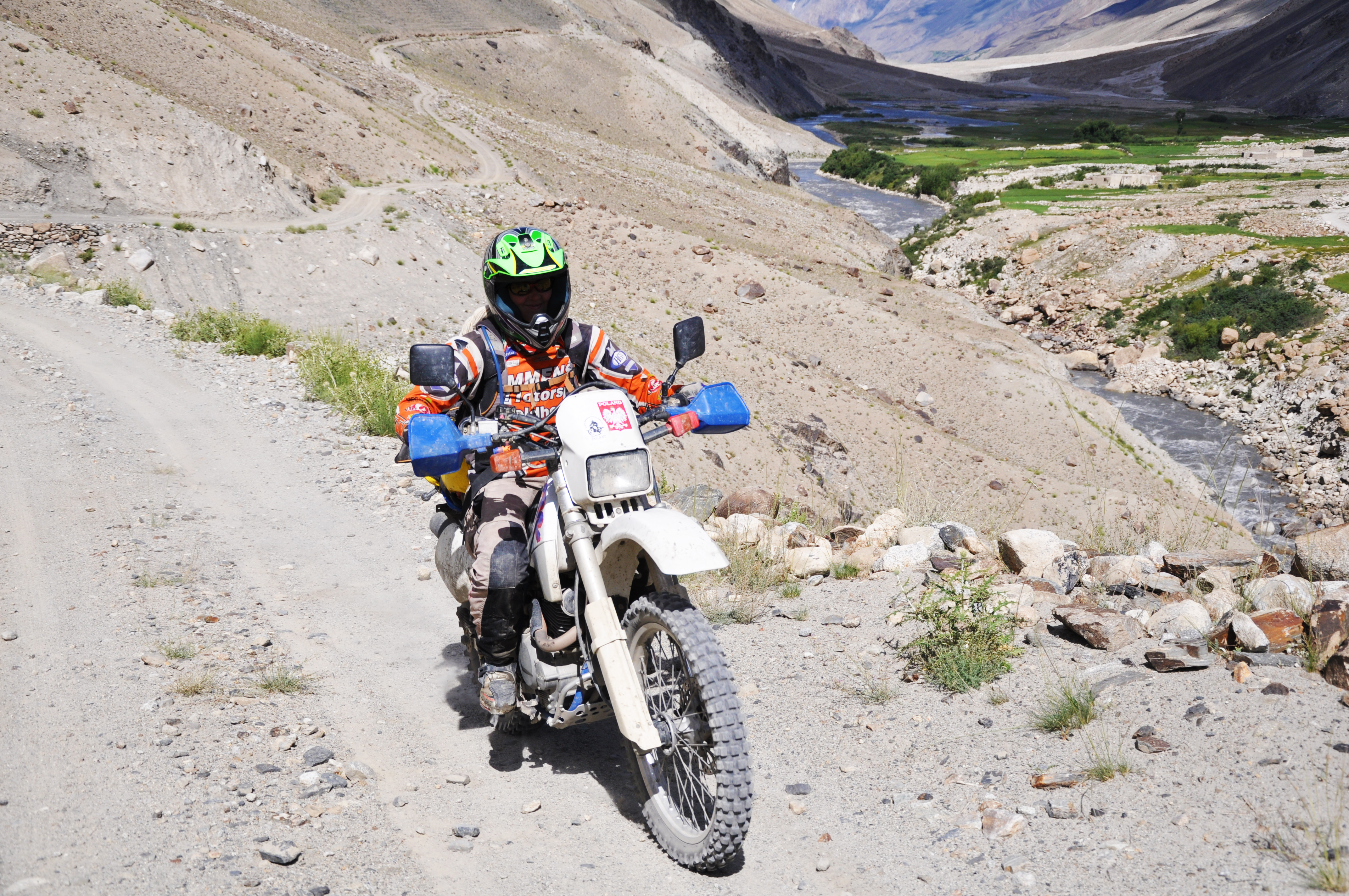 Egle: You used to be a badass lawyer. Is that why you’re constantly challenging yourself?

Ola: Oh, there is no lawyer in me at all. I am a fighter, definitely, but I cannot sit still and concentrate on tedious tasks for hours. I have to move, I have to explore, I have to test my limits.

I don’t plan to overcome yet another challenge every year, but every year, I challenge myself unexpectedly. I complete one dream, and as soon as I get home I’ve got another. I just can’t help it.

Egle: Ted Simon once said that we as travelers have the privilege to see the world as it is, and a responsibility to bring all the stories back home because the media won’t. What are the stories you’d like to bring back?

Ola: I remember the first time I went to Iran in 2009. My parents, especially my mom, were really scared. I admit, I was a bit worried about my safety, too. But it turned out that the Iranians were the friendliest and the most hospitable people ever, I had no problems traveling there whatsoever.

My fondest memory of Afghanistan was going to the Wakhan Valley and bringing pictures to the local children of the Sarhad, a Boroghil village, which we’d taken a year before. They were so happy and so excited to see themselves in printed photos! It was heartbreaking at the same time, because some of the pictures weren’t claimed, in Afghanistan, one in 10 children die because the healthcare system there is still ancient. And yet, it was wonderful to see how the smallest things made them so happy.

So yes, travelers should definitely tell their stories when they get back, the reality is so much different from the one portrayed in the mainstream media. 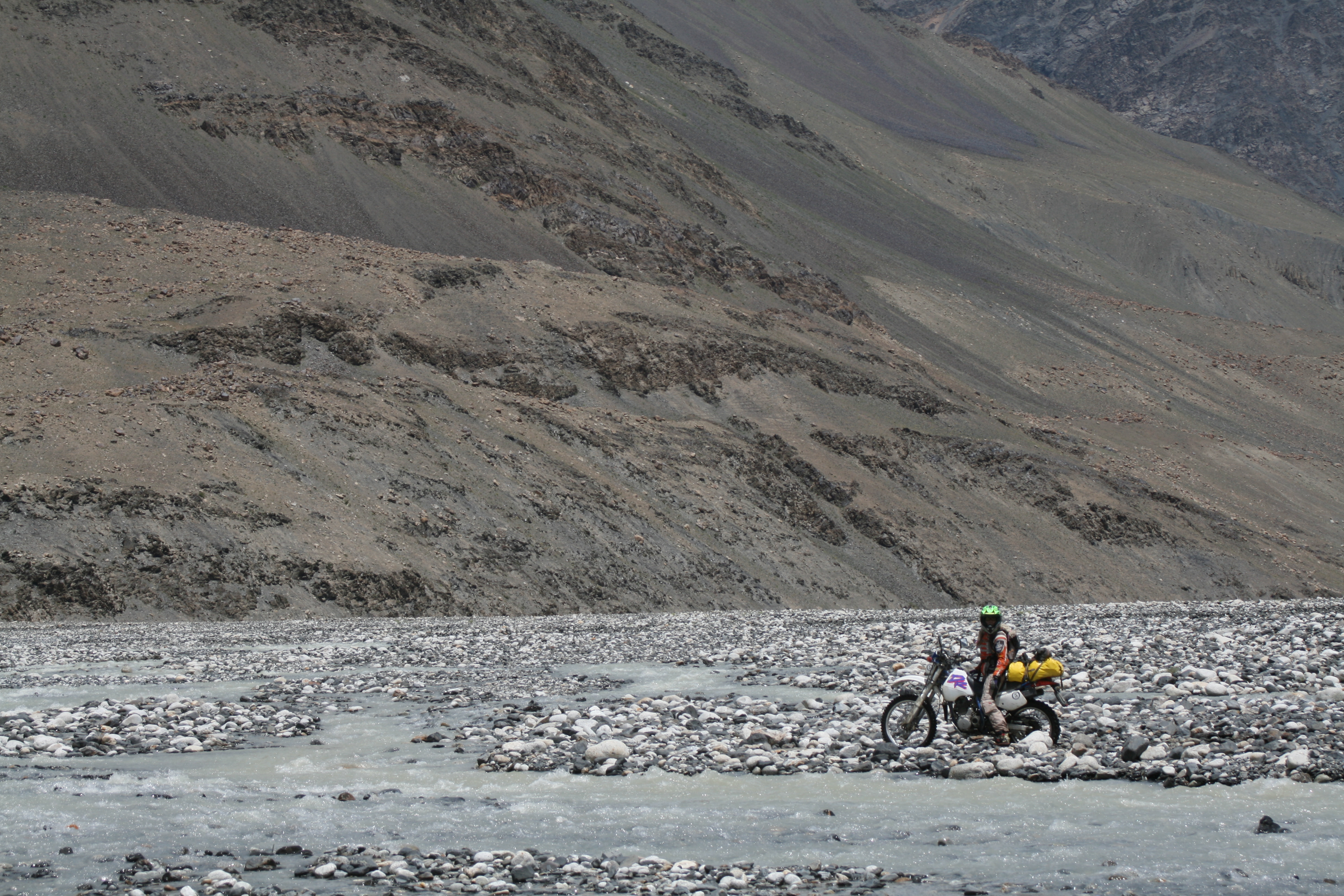 Egle: Have you ever wanted to quit riding?

Ola: No. I’ll stop to rest, but then I’ll carry on, I never quit. I think, women who ride are usually tougher to begin with. If all a girl likes to do is sit around the house doing her nails all day long, you probably won’t find her riding a bike in the middle of nowhere. And if she does ride her bike in the middle of nowhere, she probably had a strong character in the first place. I don’t think its bikes that make you adventurous, you need to have the spark of adventure within you.

Egle: Speaking of women riders – are they much different from guys?

Ola: Of course they are. Women are more cautious and less self confident: they worry about the smallest details, they worry about their legs being too short, worry the bike is too big or too heavy for them. But once they get going and realise that it’s not about the length of their legs at all, they’re fine. Men will never admit they’re too short in the first place.

They’ll take more unnecessary risks which is fine when you’re close to home, but when you’re somewhere in Kyrgyzstan with a broken leg and a broken down bike it’s not much fun at all. Men won’t admit that they’re tired or that it’s too difficult for them, while women will take a break and regroup. I enjoy riding with both girls and guys, but I’d love to see more women bikers out there. 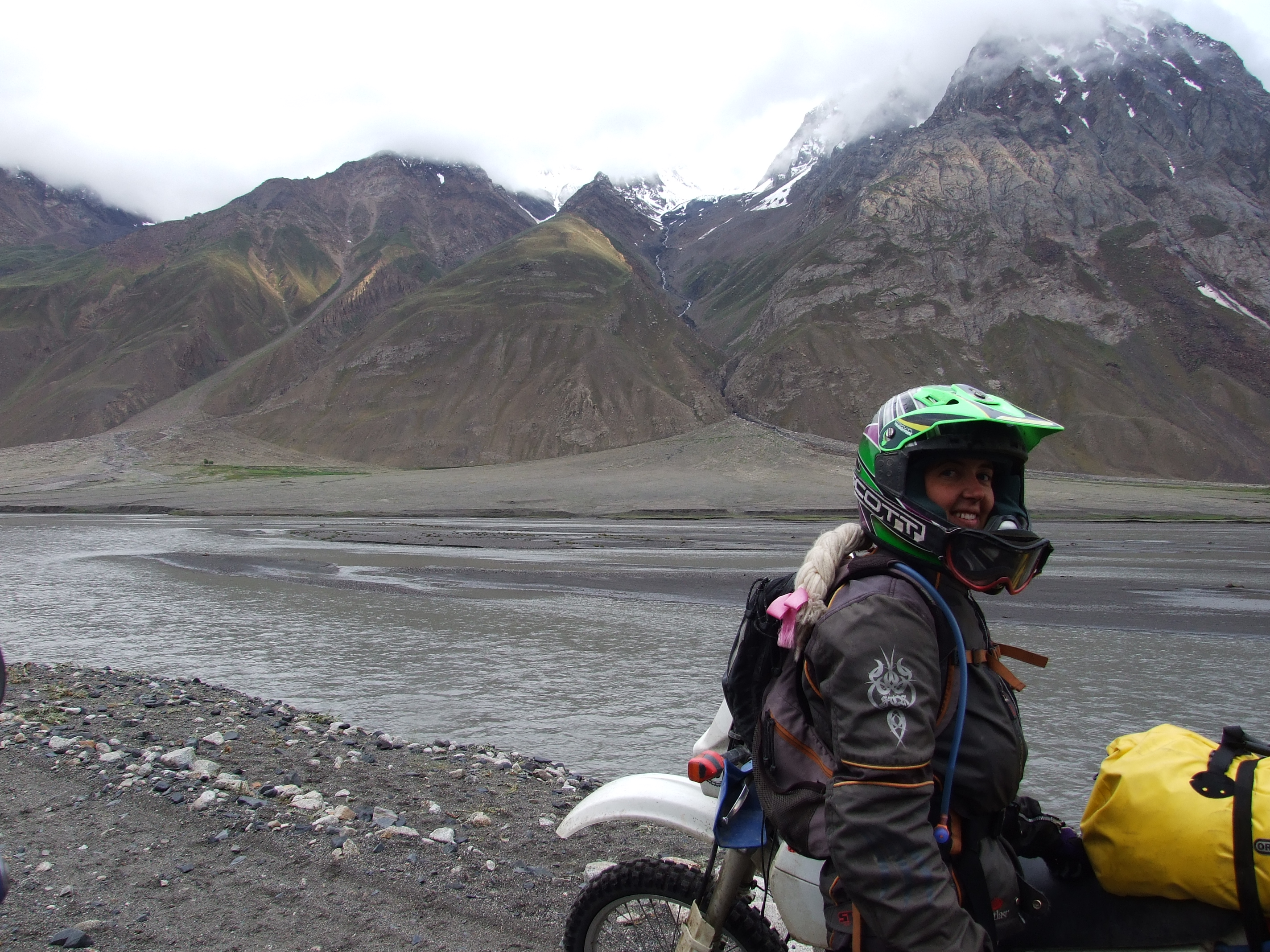 Egle: Can you imagine yourself traveling on a bicycle or by car?

Ola: I doubt that. Bicycles are definitely too slow for me, and cars… The thing is, when you travel on a bike you’re never a tourist. By definition, you’re a traveler. Even the local people treat you very differently. You’re not sitting in a car behind closed doors and windows – you’re out in the open, you’re more vulnerable, but you’re also a lot more approachable.  People come up to you, talk to you, invite your over, it’s a completely different experience.

I might move onto a 4×4 truck when I have kids and they’re too small to ride on their own, but I definitely won’t stop traveling. That’s out of the question. Yeah, I’m thinking a 4×4, or maybe a sailing boat!

Egle: I can totally see you sailing around the world! But before you ditch bikes for boats – what’s your perfect ride like?

Ola: Somewhere in the mountains, somewhere remote, somewhere off-road. I love it when the landscape is constantly changing – you start off in lush green and end up in the desert on the same day. I love it when the road is challenging, when in the evening I’m exhausted and I can say to myself: “yeah, this was a great ride”. I love it when I put my tent up and there’s no one around for miles. There are still places like that in the world, with vast, empty spaces. 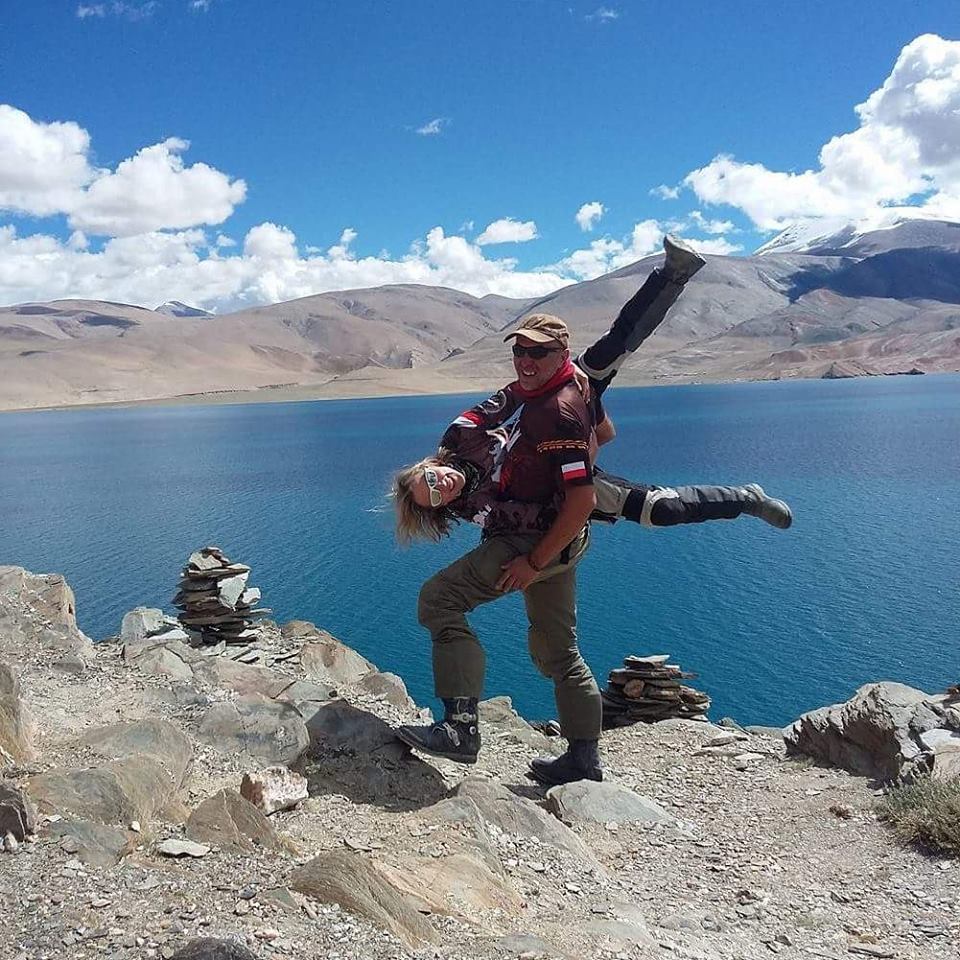 Ola: I really enjoy riding in the Himalayas because of the abundant Buddhist culture combined with staggering altitudes. I come back there very often. I also love Northern Argentina and the Bolivian altiplano – it’s lonely, but the views are absolutely incredible. You cannot find anything like that anywhere else on the planet.

I love huge contrasts, so one of my favourite rides is crossing from Armenia to Iran: from the oldest Catholic country with it’s beautiful ancient churches into the Islamic world with the muezzin calls for prayer and Muslim mosques in one day. It’s astonishing.

Egle: I have a feeling that simply reading about your experiences will make a lot of folks out there itch for the road. What’s your advice for people who want to start adventure riding?

Ola: Just take the first step. Get off your butt, get out there, throw your leg over the saddle, and go. The rest? The rest will follow.

“When you ride a bike, the only limits are your own. I’m sure someone will eventually ride up the peak of Everest – it’s only a matter of time”