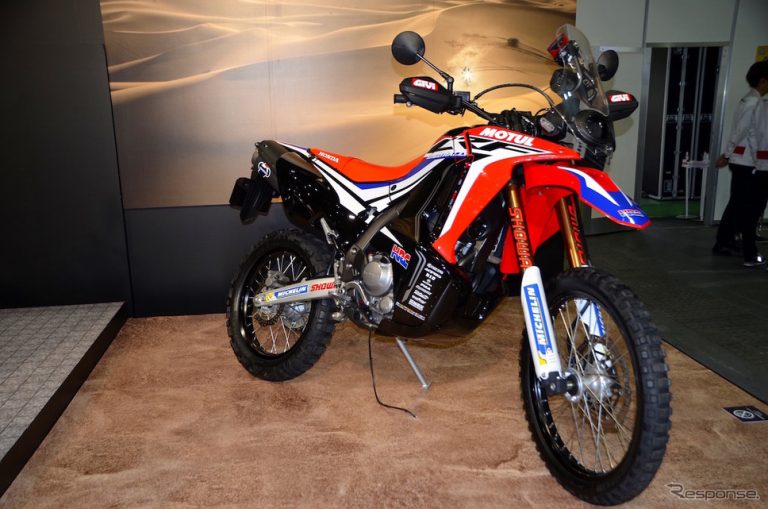 Honda’s expansion in the adventure motorcycle sector looks set to continue with the appearance of a CRF250 Rally prototype on show at the Osaka Motorcycle Show in Japan.

Previously seen in as a concept bike at the Japanese show in 2015, the latest sighting seems to suggest the bike is now in the prototype stage with production on the horizon.

Stylistically, the bike looks very similar to Honda’s CRF450 Rally and while it is not being touted as a production racer, it certainly looks like a go-anywhere bike that can handle a lot of different environments and obstacles – something the motorcycle’s competition-derived parts will help with.

The machine has been formulated around the street-legal CRF250L and looks to be suitable for use on public roads, as well as off-road, with indicators, mirrors and a license plate holder.

Features on the prototype also appear to include an asymmetric LED headlight, tall windscreen and Termignoni twin exhaust silencers instead of the Mugen ones that appeared on the concept model.

As no specs have been officially released, it is hard to nail down just what the bike will consist of but there are rumours that the beating heart of the machine will be the 286cc engine from the CBR250R.

The final version of the CRF250 Rally is expected to be launched toward the end of the year and it is likely to hit dealers some time in 2017.

What do you think of the prototype? Let us know on Facebook, Twitter or in the comments below.