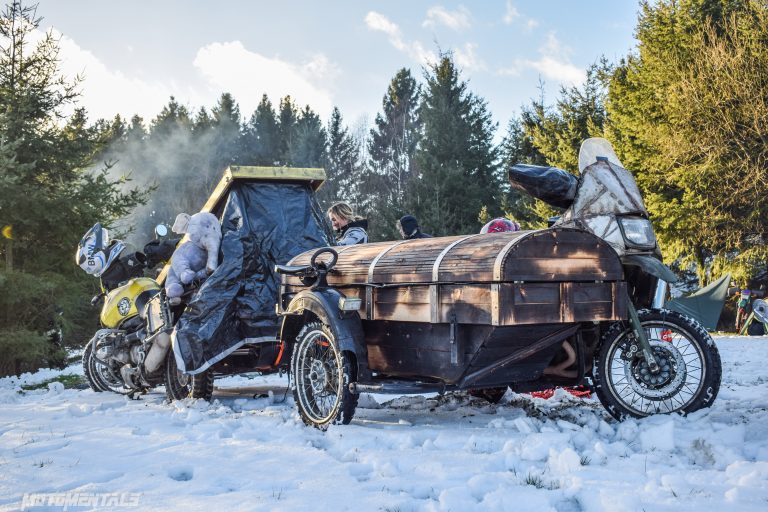 The Elefantentreffen or Elephant Rally, Germany’s annual sub-zero biker rally, has a turbulent history. The meeting was first established in 1956, close to the iconic Nürburgring in Germany by Ernst Leverkus, originally as a meeting for riders of the Zundapp KS 601, also known as “Der Grune Elefant” or the Green Elephant.

As the meetings grew in size and popularity the Elefantentreffen was born, named after the bike which had brought it all about. However, this rapid growth ultimately contributed to the demise of the rally. After the shenanigans at the Elefantentreffen went too far in 1977, the rally was no longer welcome and sadly the search begun for a new home. Eventually, the rally found a new safe haven in Solla / Loh close to the Czech border, where it runs to this day. 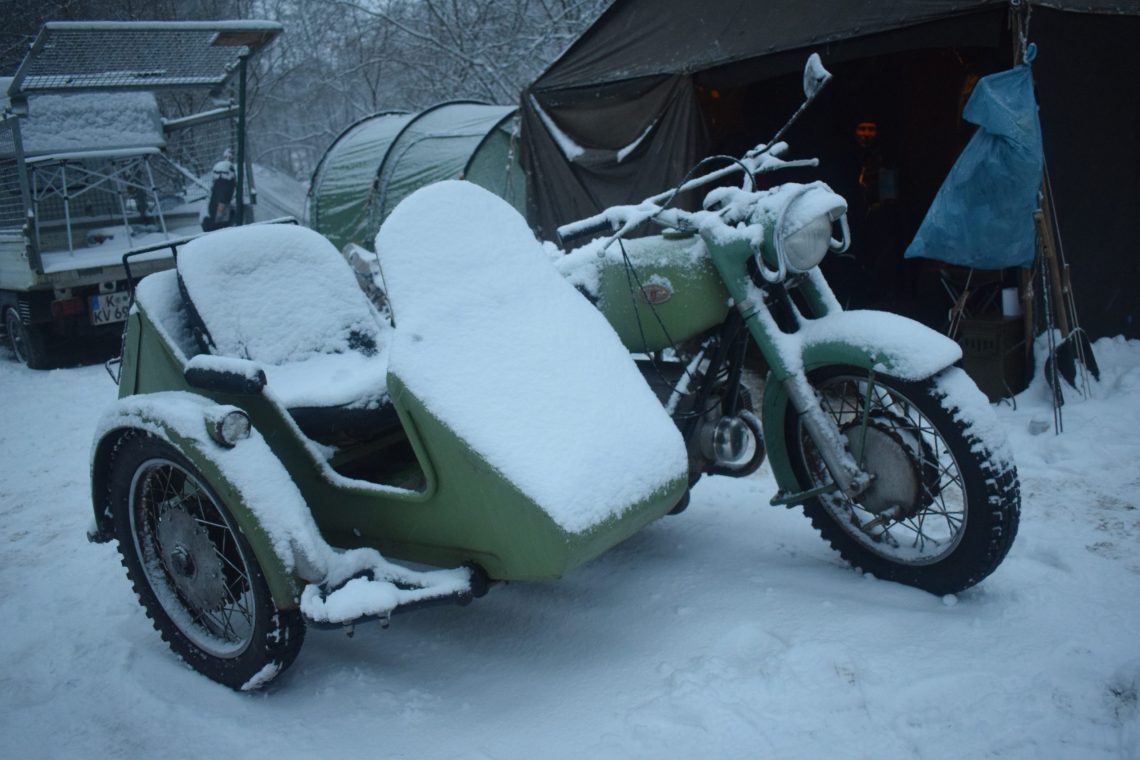 An original ‘Green Elephant’, still making an appearance at the rally.

There was a great panic in the area surrounding the campsite upon the announcement. Fearing the arrival of motorcycles and their riders, many shops remained closed and the local police were summoned to keep an eye on the surroundings. Unsurprisingly, the prejudices were proved unfounded and the 900 attending motorcyclists had a modest, pleasant party before returning home. The Altes Elefantentreffen was there to stay. 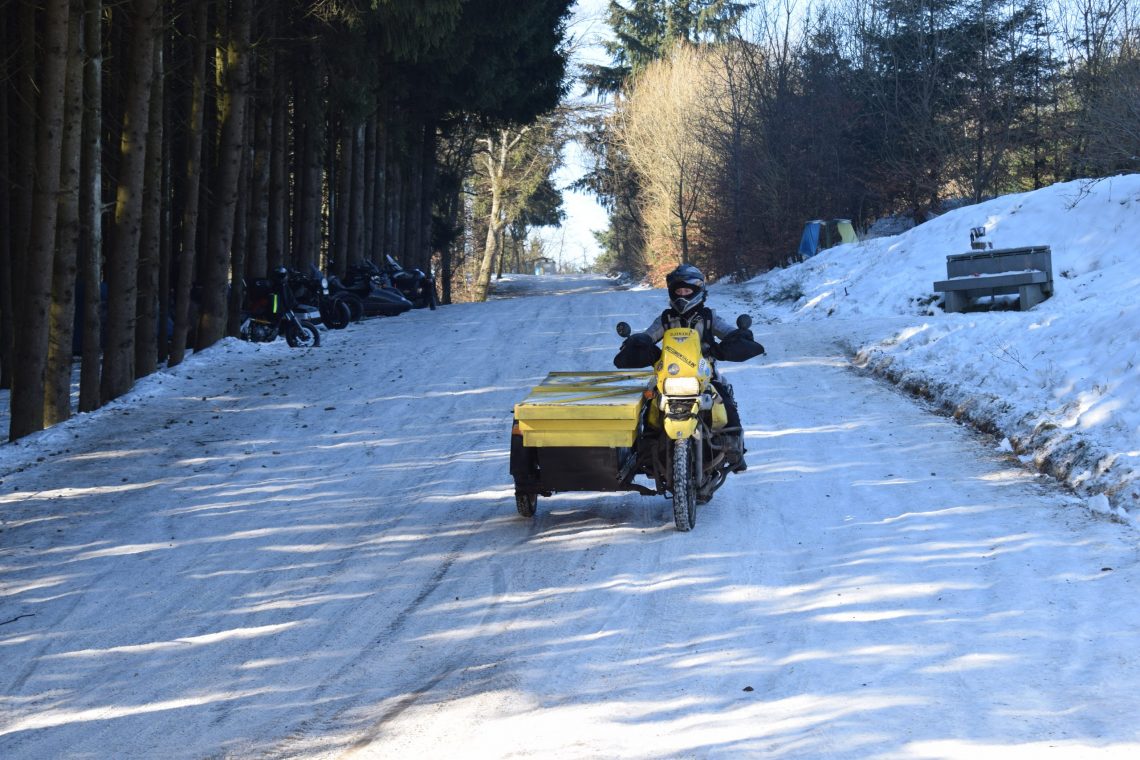 If attending an Elefanten is on your bucketlist, but you’re unsure if you can handle the cold, the Altes Elefanten is the one to start with.

In comparison to the Elefantentreffen, the Altes is only a ‘moderate’ snow rally. Since it’s based at the campsite of the legendary racetrack there are hot showers, heated restrooms, electric plugs and even a restaurant and a bar when you can’t handle the cold anymore and require a hot beverage to stave off those first signs of hypothermia.

Temperatures are often comfortable (comfortable being very subjective at a rally that will still experience snow) and in years past there have even been some with no snow at all.

Despite it not having the same ‘touch’ as the Elefanten, we still enjoy going to the rally. Snow or no snow, we can’t wait to meet up with old and new friends while sitting around a toasty fire and enjoying the company of other bikers. Since you’re at a campsite, there’s less exuberance in some of the riding on-site, ensuring this rally won’t be banned from the area again. Indeed, the E-Team asks you deliberately to respect the grass underneath the snow, while a designated area is created for those willing to have a ‘joy-ride’. 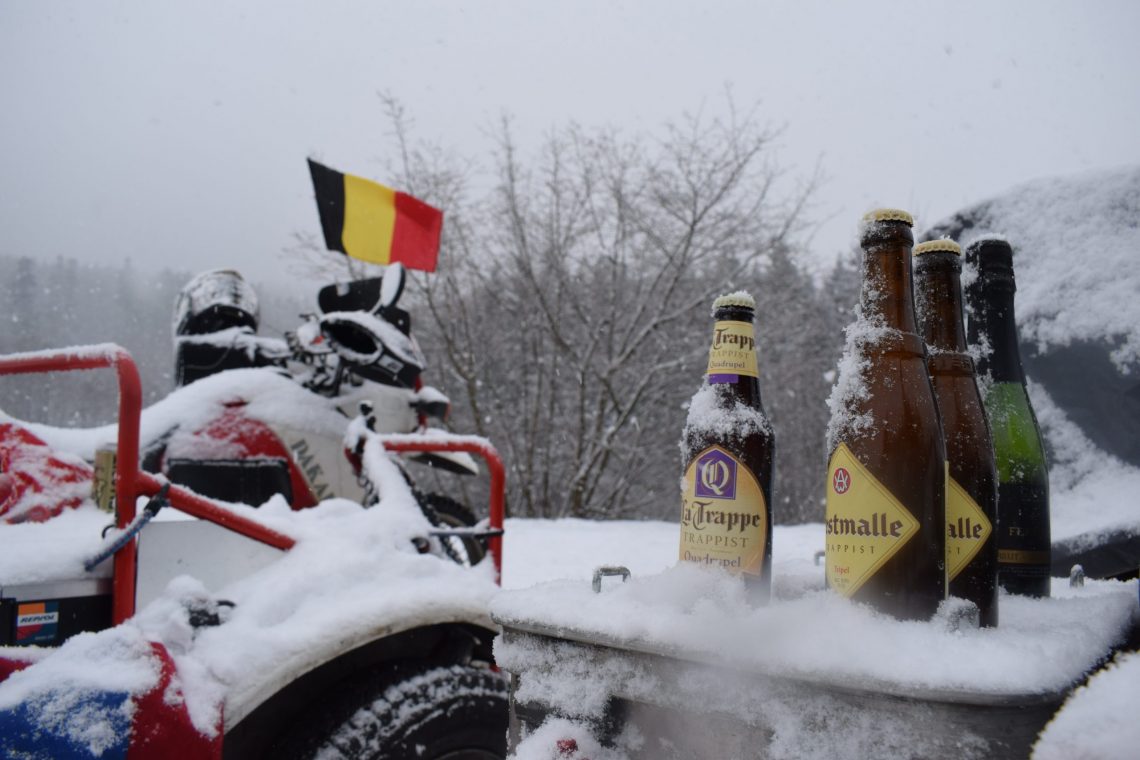 The rally isn’t just something to cross off your bucket list though, it’s a community event that will have you wanting to go back year after year. The variety of motorcycles is simply amazing. You will see brand new, shiny bikes stood beside a varied selection of interesting custom builds; including a selection of custom built sidecars and attachments that winter rally enthusiasts have designed over the years to make their stays as comfortable as possible.

The community feel is further highlighted on Saturday evening as the valley goes dark. The names of bikers that were lost are called out as we go for a torch ride-out across the campsite. Hundreds of motorcycles and sidecars with a torch attached going for a wake for our lost brethren. It’s always a spectacular, and highly emotional, moment to witness. After paying their respects the bikers return to their dens and enjoy an evening of stories around their campfires. 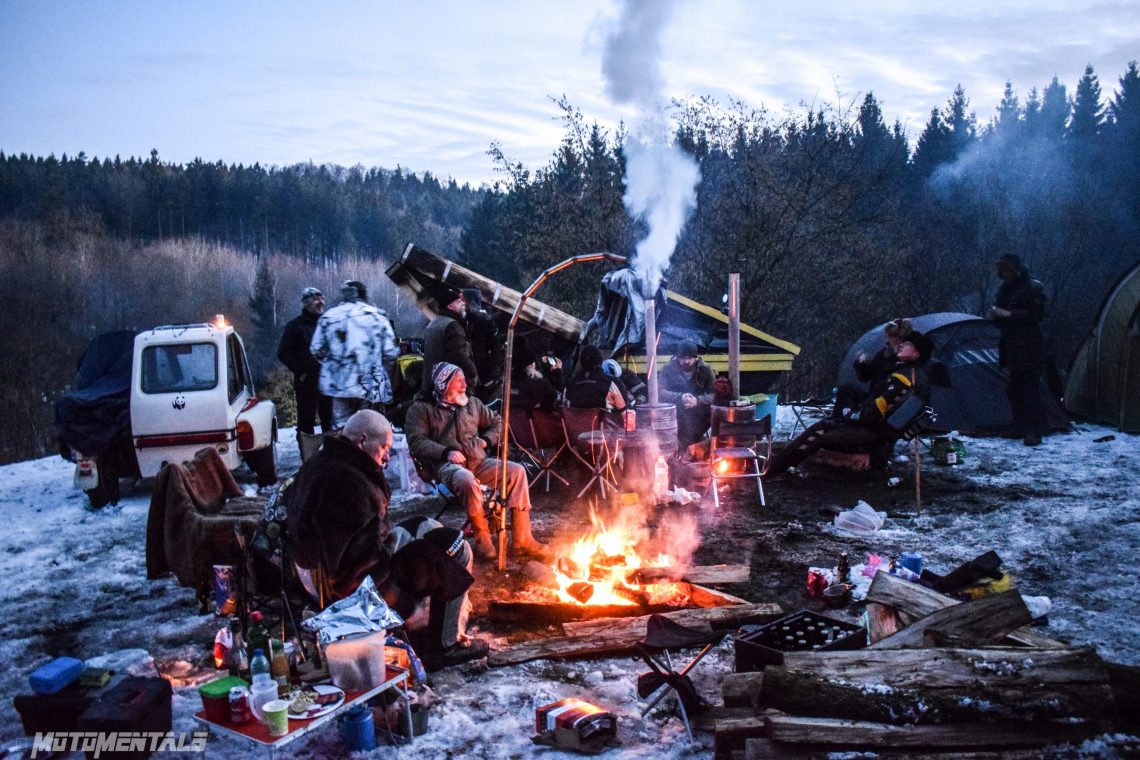 During many visits to each of the two Elefantens I have met friends for life. It’s hard not to, if you go for a walk across the campsite it won’t be long before someone invites you over for a chat. Quickly you’ll bond with this stranger as you sit in the cold, sharing a beer or a hot wine, telling each other your stories. While your stories may be wildly different, you were both possessed by that same urge to travel by motorcycle to a rally in the snow, to sit by a fire amid your fellow bikers.

This year the event takes place from 14th till 16th February 2020 and will cost you 35 Euros if you arrive with your motorcycle or sidecar, including the overnight stays, electricity and the use of the heated restrooms. Address Camping am Nürburgring GmbH, Kreisstraße 72, 53520 Müllenbach