Watch: Does this driver squirt screen wash at filtering biker on purpose? 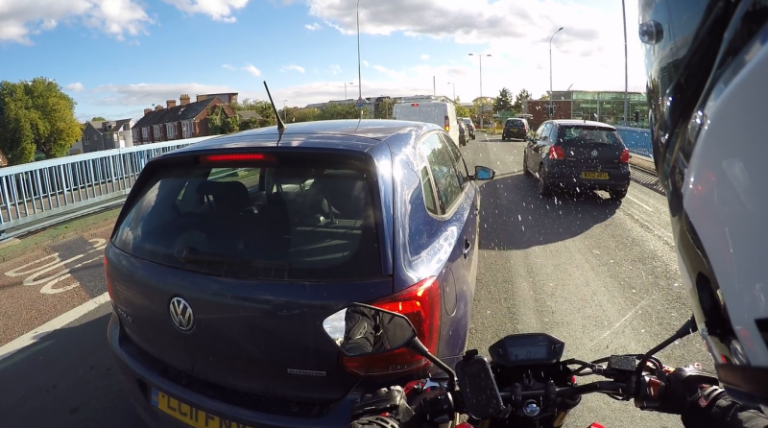 Filtering – it’s a very taboo subject. Here in the UK, filtering is legal if done with due care and attention, and is not dangerous. However, we all know far too well that some car drivers seem to have missed that part of the highway code, and think they have the God given right to prevent, block or sometimes, even abuse us when we try to do so. Their arrogance on the road can often put our safety in jeopardy.

As I was scrolling through Reddit, I stumbled across a video of a biker riding through traffic in Exeter who catches some possible anti-bike filtering action on his helmet camera. The rider approaches a roundabout, where the traffic starts to queue, in which he then starts to filter between the two available lanes.

A Volkswagen Polo to the left of him seems to brake and pull over unnecessarily to the right in order to block or make it more difficult for the rider to pass. You can then here the rider’s frustration in the situation as he exclaims: “Oh, you’re being such a f***ing c*ck aren’t you.”

It’s at this moment, that the driver of the Volkswagen Polo proceeds to squirt his windscreen washers, which start to pour over the biker and his bike. It’s quite comical and the rider just starts to laugh, looking around to see if anyone else is watching.

Nervous_Bert: It’s especially irritating when they do it on gridlocked dual carriageways when you can filter up the middle, most people actually move over to give you room, but there’s always one spunk trumpet that moves over to block you.

Blabberm0uth: Someone’s wife left them for a biker…

Humble_Giveaway: Would have taken the ****’s mirror off personally. If your visor was up, that could have temporarily blinded you while having to control a bike.

Firerain: Carry a squeezy sports drink bottle for next time. Establish dominance, spray them back.

How mamy of you have had this happen? from r/MotoUK

So, what are your thoughts on the footage? Do you think the driver did this on purpose or do you think it was done by accident? I’d love to know your thoughts and your own filtering experiences, let me know in the comments section below.