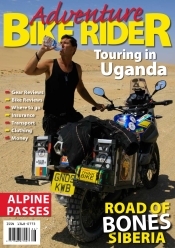 Okay, I’m going to let you in on a little secret. For the past 15 years I’ve been publishing a magazine called Adventure Travel. If you’re into hiking, climbing and catching incurable diseases in jungles it’ll be right up your street. But that’s no secret. This is…

We’ve been working behind the scenes on a new magazine called Adventure Bike Rider, and the first issue is getting close to going to print.

Over the past few months I’ve been out and about visiting the great and the good in the motorcycle industry and the support for the new title has been fantastic. All the major manufacturers are supporting the launch, including BMW, Yamaha, Ducati, Kawasaki, Honda etc. To a company they all agreed that there is a gaping hole on the newsagents shelf for a title called ‘Adventure Bike Rider‘.

The front cover image I’ve posted here is a work in progress, just something to give you a flavour of what’s to come. I’ll post up more details over the next two weeks as the print date gets closer. Spread the word.

Wow, reading this today is a blast from the past. Back then, ABR was in its infancy, a website started by one guy who had a passion for motorcycling and travel. Today, we’ve managed to grow the title into the biggest adventure motorcycling publication in the UK, perhaps the world.

It’s humbling to look back at where you began, and it’s pretty safe to say that ABR wouldn’t be anywhere near as successful as it is today without the support of you guys, our readers. Whenever we exhibit at a show or host an ABR rally, it’s truly humbling to meet so many of you who enjoy what we do. Here’s to another eight years of adventure motorcycling fun!
Bryn Davies, Editor of Adventure Bike Rider