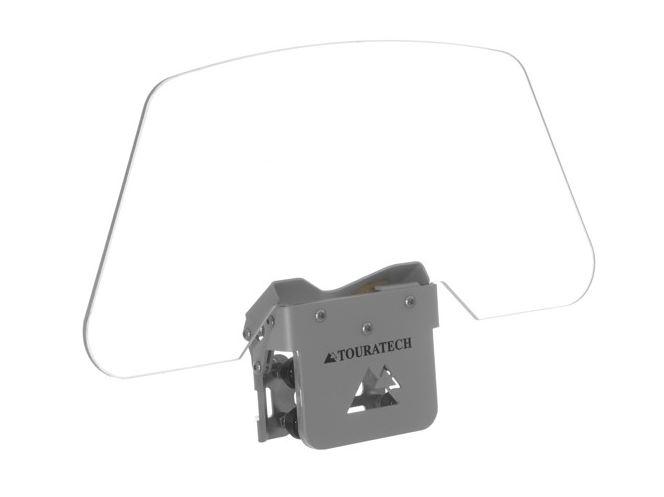 In my eternal quest for calm and tranquillity on two wheels I’ve just attached a Touratech Universal Windscreen Spoiler to the screen of the Triumph Tiger. At £99 (including postage) this strip of plastic and a metal clamp contraption is not what you’d call cheap, in fact when measured by the inch I’d say it’s the most expensive screen I’ve bought. So, do you get performance to match the dent in the wallet?

What is the Touratech Universal Windscreen Spoiler?

As requested by many customers there is finally a windscreen spoiler that fits almost all common windscreens. Simple and easy to fit. Increases windscreen height by about 13cm and is adjustable to different angles. Forget about nasty airflow and noise (without German TUV Certificate).

How we got on with it

First off, I’d better explain what I know about ‘without German TUV Certificate’, which is best lifted from the mighty 1026 page Touratech catalogue. It says here; ‘Since the spoiler can be affixed and removed without tools, it is not supplied with a German TUV certificate’. Which I presume means – it’s not passed a safety test and if you don’t fit it right it can fly off and decapitate you. Or something along those lines.

I ordered the part on-line from www.touratech.co.uk and, having completed the payment process, was informed by email that the item was out of stock and would be with me within 10 working days. The company was true to its word and the screen duly arrived within the time stated.

I don’t know what I was expecting for £99 (including postage), but when I opened the package let’s just say I was underwhelmed. When measured by the inch this is a pricey piece of kit that, on first view, looked like something an underfunded scout group would knock up using a couple of sticks. You basically get; a small screen fixed to a metal clamp with four rubber feet to grip the screen. Basic is the word.

The supplied fixing instructions are about as much use as a quantum physics formula would be to a five year old, unless, that is, you speak German. Not good when you’re paying that amount of money. Fortunately, as it’s such a basic product you don’t need the brains of Einstein to work it out either. 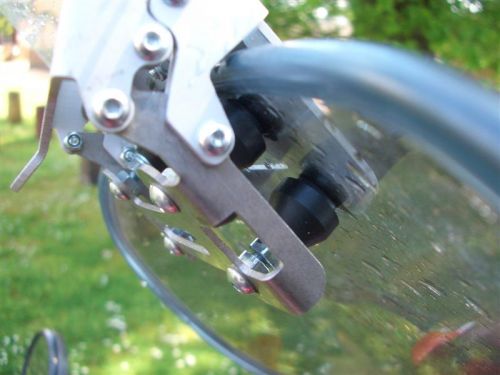 The four rubber feet slipped onto the Tiger screen with no problems but when the clamp was tightened it also slipped back off just as easily. As the company brochure says it can be fitted without tools, I set about ‘fitting it without tools’ only to find that by screwing the rubber feet as tight as I could the odds were that the Universal Screen would be coming off fairly soon with a good chance of smacking me in the gob when it did so.

The answer was to reach for an 8mm spanner and tighten the nuts behind the rubber feet until secure. Perhaps the German TUV could now issue me with a certificate.

But now to the all important question. Did I find a tranquil state of Nirvana behind the Touratech Universal Windscreen Spoiler? Well, let’s just say this; on the five minute drive to the office, the heavens opened with such fury traffic speeds were reduced to such a crawl a Tesco bag on two sticks would have done the job, so the big test would have to wait until later.

And so, to later… I’m impressed. In use there is no doubt that the screen works. I was able to ride at 70mph with the visor up and not a tear came from my eyes. The wind blast was diverted away from the helmet area and far more onto my shoulders than with the normal screen – and that makes me a far happier camper. This might not be the case when fitted on different screens so be aware.

Aesthetically, the screen is pants. There is no other way to describe this other than to quote Prince Charles famous line about the modern extension to the grand old British Library ‘it’s like an ugly carbuncle attached to an old friend’. So you’ll not be buying this for the looks. 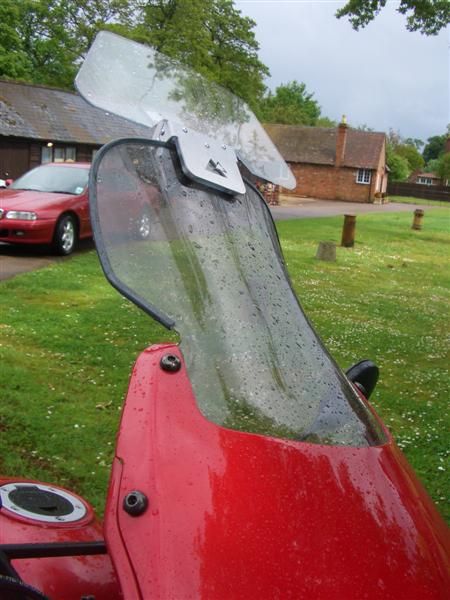 It’s bloody expensive and it makes your bike look naff, but it works and for that reason alone I can recommend the Touratech Universal Windscreen Spoiler with the following proviso – it might not work on yours. At this price, and as it’s so easy to fit, maybe the company should have a sample they can send out for trial where you just pay the postage. Or maybe not.