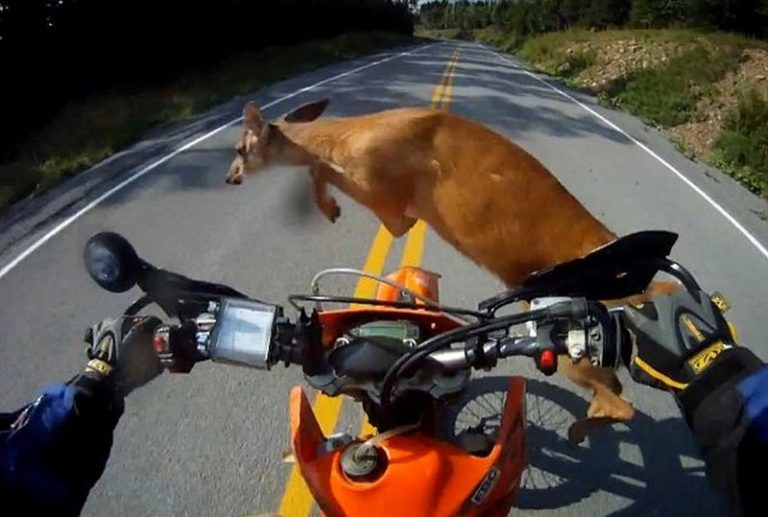 On a recent post to our Facebook page, we asked ABR readers and followers what their scariest adventure motorcycling moment was, and well, we were hit with a whole heap of different answers. Some of them made our palms sweat, some made us laugh out loud, and some made us wince and say ‘oh s***!’.

Here are just some of the answers we received…

Dan Moody: I was on a remote road in Chiapas, Mexico and I rolled up on some Zapatistas rebels who had the town blockaded from federal troops. Trees cut across the road, burning tyres, guns, and lots of mean looks. No turning around due to fuel low, so I just gave a friendly nod and idled through the crowd.

Eddie Hamilton: This summer in Italy, I was heading down a clear road and a wagon pulled out to overtake another one like I was invisible, forcing me onto the grass verge. Sphincter moment!

Craig Niven: Laying under a car with my helmet trapped between the sump of the car and the road, and not being able to catch my breath for what seemed like an eternity.

Daniel Johnson: I came around the corner on a old forest service road, on Pryor Mountain in Montana, and came face-to-face with a black bear and her two cubs. She started snarling and stomping her feet. I didn’t have a chance to turn around so I drove straight towards her and scared her off. I reupholstered the seat after that!

Pete Hammonds: In the early 80s, I was sitting in at the back of a queue of traffic on a Goldwing. I heard a bang just behind me and within a split second a truck went past me on the grass verge. Turns out his brakes failed and he took invasive action to avoid hitting me…. Someone was looking down on me that day, thank god.

Rupert Atkinson: Around 1980, I riding over the crest of a hill in the Peak District, in the twilight, when a low flying jet fighter flew right above me. Supersonic – so it sounded. Never saw it coming, but after the shock of the sound, I nearly fell off. I saw the afterburners glowing in the distance.

Charlie Heidenfelder: When I was a kid I used to ride this trail to my riding area, it was behind some houses. I guess it pissed someone off, as they strung barb wire across my trail. I hit the wire at about 30mph, but luckily, it caught my bike right below the handle bars which snapped the barb wire. A little higher and I probably wouldn’t be typing this. I never found out who did it, but I made sure to really annoy them for a long time after.

Dave Stockwell: Outrunning a rather large tornado on a severely under-powered classic bike, while crossing the farmlands of southern Minnesota.

Jack Fletcher: Oh man, I was riding down some dirt back roads with my friend. Both of us on XR650Ls and my friend spots this rattlesnake. He runs over the snake and jacks the throttle wide open. The knobbies grab the snake and throws it into the air where it flew right over my head. All I could picture was this damn rattle snake landing in my lap!

Andrew Pollard: I had what I thought was a wasp enter my helmet once – luckily, it turned out to be a toffee wrapper.

Craig Woodson: When I hit a deer on a 1980 VZ80 when I was ten years old. When I was held at gun point by the Sundowners and most recently, when my wife asked me to sell one of my bikes.

Oh and we also had this comical answer which we enjoyed – sound familiar?

Phil Upton: Escaped from a prisoner of war camp on a German army motorcycle. Rode like I stole it (I did). Jumped loads of border fences into a neighbouring country while being chased by thousands of SS shock troopers. All I had were the clothes I was wearing, a baseball and a glove. It was mental – should have been there.