Riding halfway across the world on 125cc adventure bikes 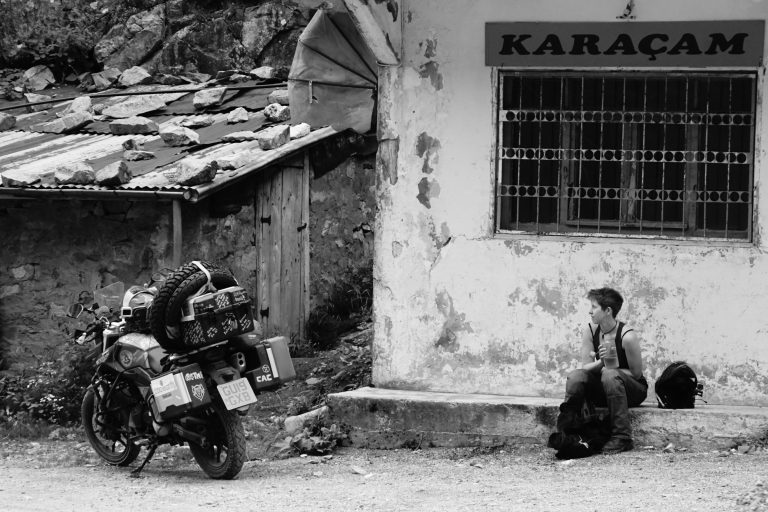 The idea of travelling halfway across the world is terrifying to many people, even more so if you’re doing it on a motorcycle. Add in the complicated border crossings, lack of roads, time restrictions and a limited capacity of just 125cc, and you find yourself left with a handful of people and the Mongol Rally. 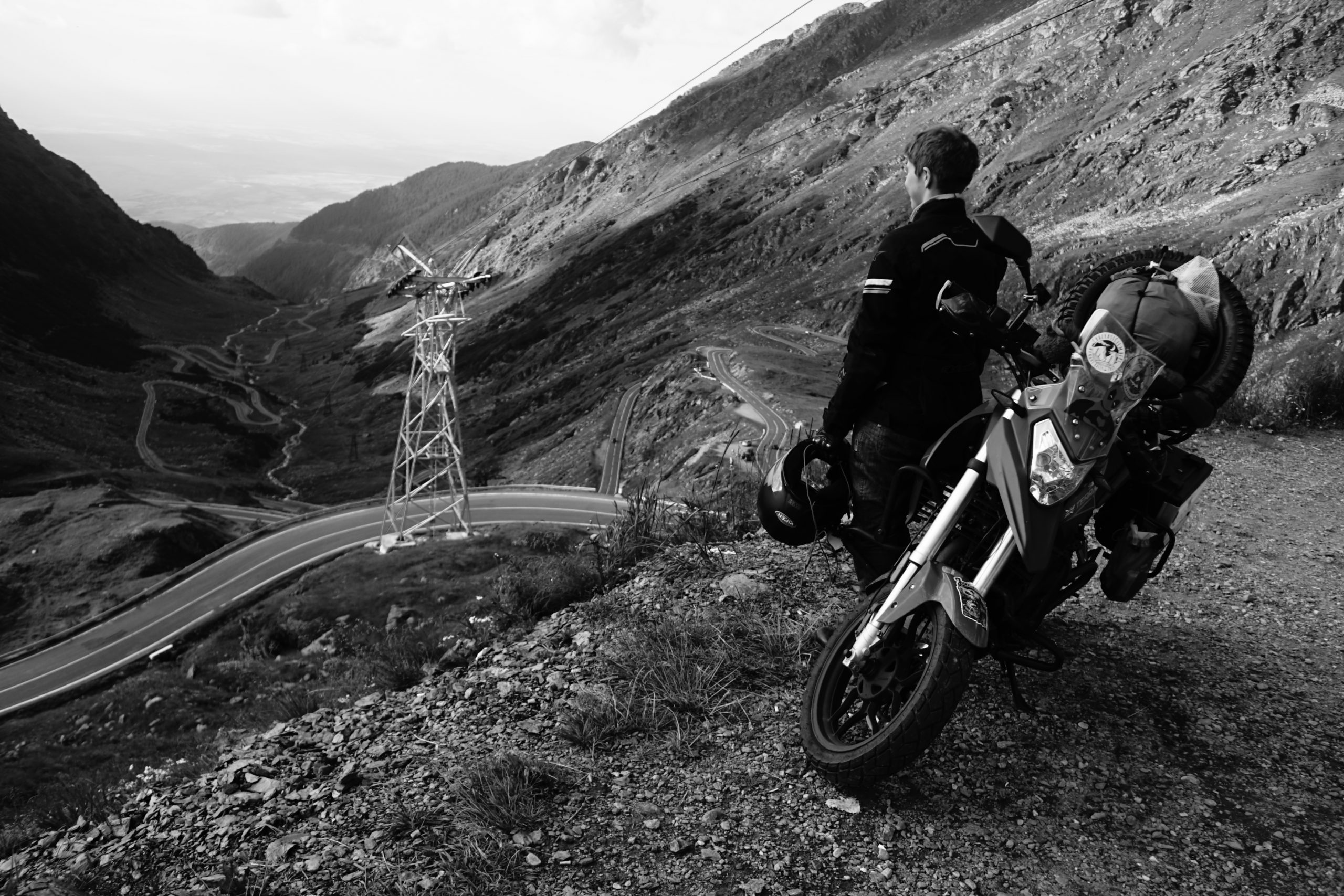 The Rally itself has been running since 2004 and in its simplest form involves driving to Mongolia (or Ulan-Ude, Russia to be more specific) from Prague, Czech Republic in either a 1.2l car or 125cc motorcycle (or less if you really fancy a challenge). It’s about taking what would be classed as an “inappropriate” vehicle and showing the world what it really can do when it must.

We signed up last year (or rather Holly signed us up and then told me) shortly after I told her of the Rally, which I had discovered four years prior but had never gotten around to doing. Our steed of choice: We each opted for the  Sinnis Terrain 125, a rugged ‘mini-adventurer’.

After that it became a six-month obsession; contacting potential sponsors, raising money and awareness for charities, getting our gear and savings together and getting all the red tape paperwork signed, sealed and delivered…at some point we planned out a route as well in our local tea house in Vauxhall, London.

Those six months raced past and before we knew it, we were in Prague along with more than 800 others at the start line of the Rally. Of these slightly mad humans that had entered, only six (less than a single percentage) had chosen to do so on motorcycles. Well, five motorcycles and one sidecar unit. On learning this, we knew we were in for a rough ride… 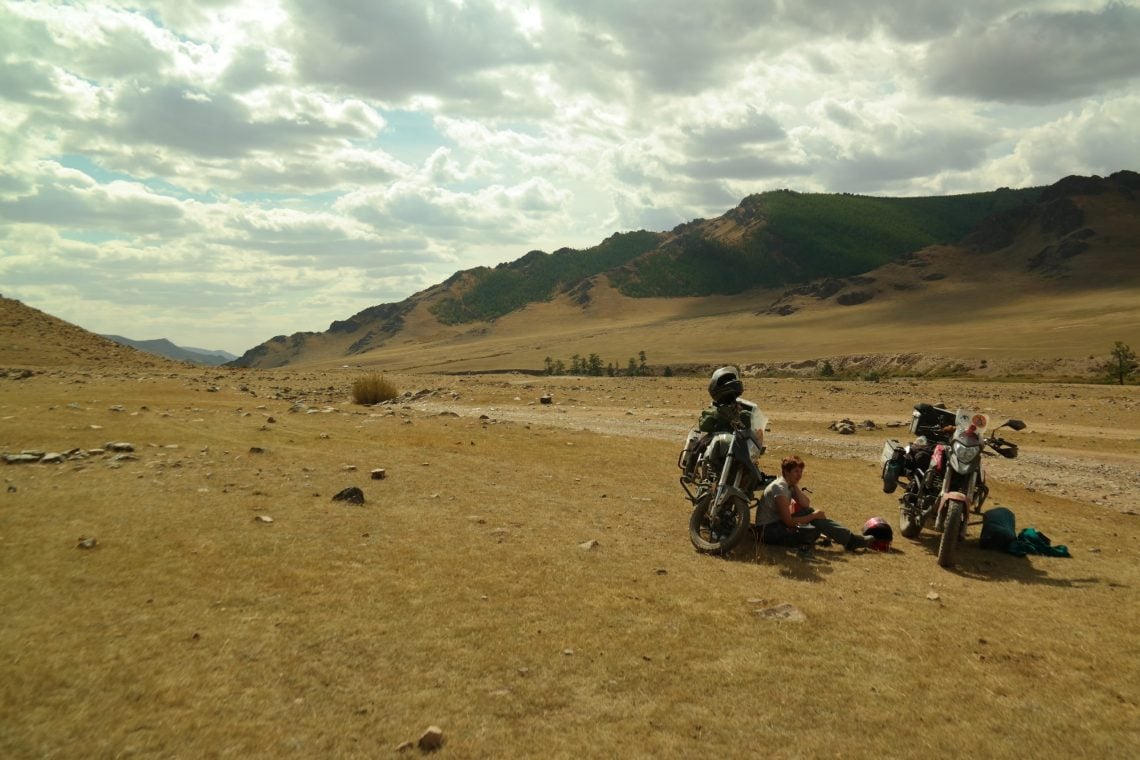 Crossing a continent (and a half)

Our journey would take us from Czech through Slovakia, Hungary, Romania, Bulgaria, Turkey, Georgia, Azerbaijan, Turkmenistan, Uzbekistan, Tajikistan, Kyrgyzstan, Kazakhstan, Russia and into Mongolia before officially finishing the Rally in Ulan-Ude, Siberia.

The journey, despite being in a condensed time window, was a spectacular view into the world and a fast-forward journey through the landscapes and cultures that create it. Our top three highlights would be the unexpected but deadly mountain regions of Turkey spanning from Cappadocia to the coast, the astonishingly beauty of the Pamir Highway and its rugged roads and the nomadic northern off-roads in Mongolia.

Turkey was a surprising haven for us. We had just planned to visit Istanbul (where East meets West) then get through to Georgia as quickly as possible with a stop over to see the fairy chimneys in Cappadocia without any other real expectations to see much else. I am so glad we were wrong! 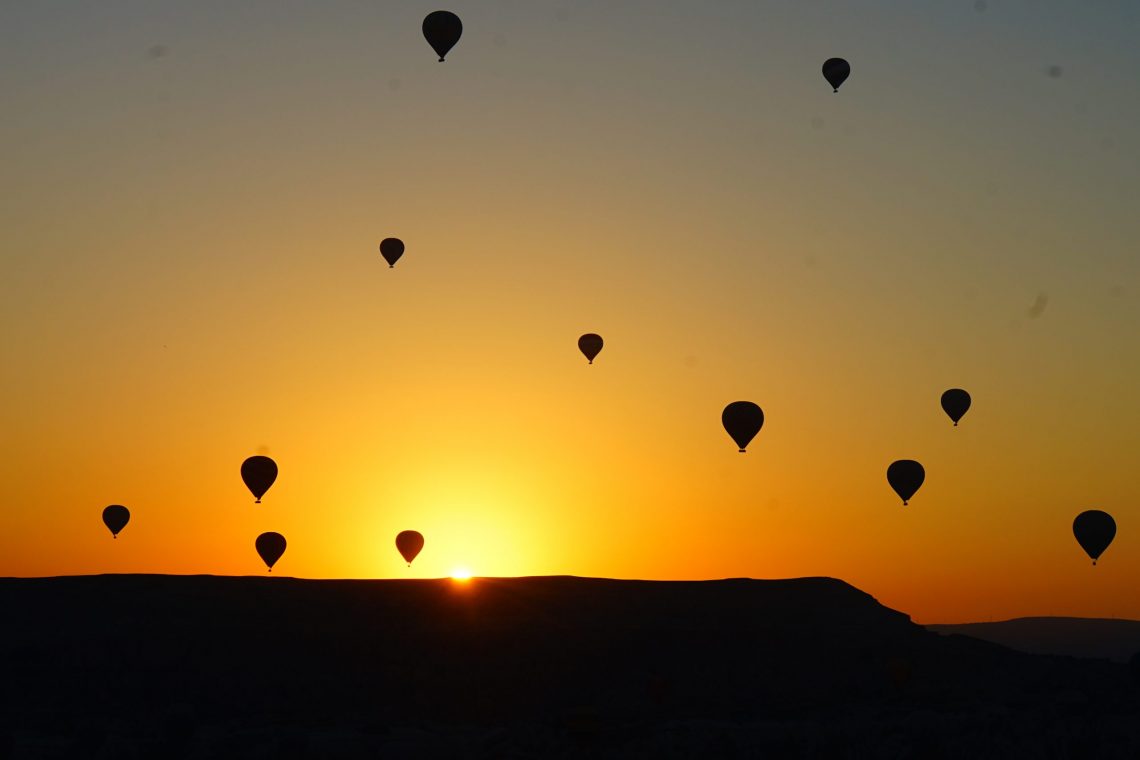 Cappadocia itself was a natural wonder, spires of tuff rock jutted up and out within large canyons which persecuted Christians fleeing from the Roman Empire had then hollowed out and turn into their homes and sanctuary. Its true beauty shone out at night with the lights within the chimneys illuminating an almost science fiction scene. You’d be forgiven for thinking you’d wandered in on a movie set.

Heading North East from Cappadocia the mountain passes were spectacular; snaking around the mountains themselves the gravel roads never felt dangerous until we reached the infamous D915; Death Road. The gravel evolved into rocks and the road width reduced to the width of a small car as we continued to climb further into the mountains.

The most intense part came after reaching the highest driving point, you find yourself with a drop of a few hundred metres as you start to descend on switchback hairpins with gravel, rocks, flowing water and no barrier. It certainly leaves you clenched throughout, however goes on to reward you with not just with scenery that came straight from a fantasy novel, but an overwhelming sense of achievement, and also of being alive. 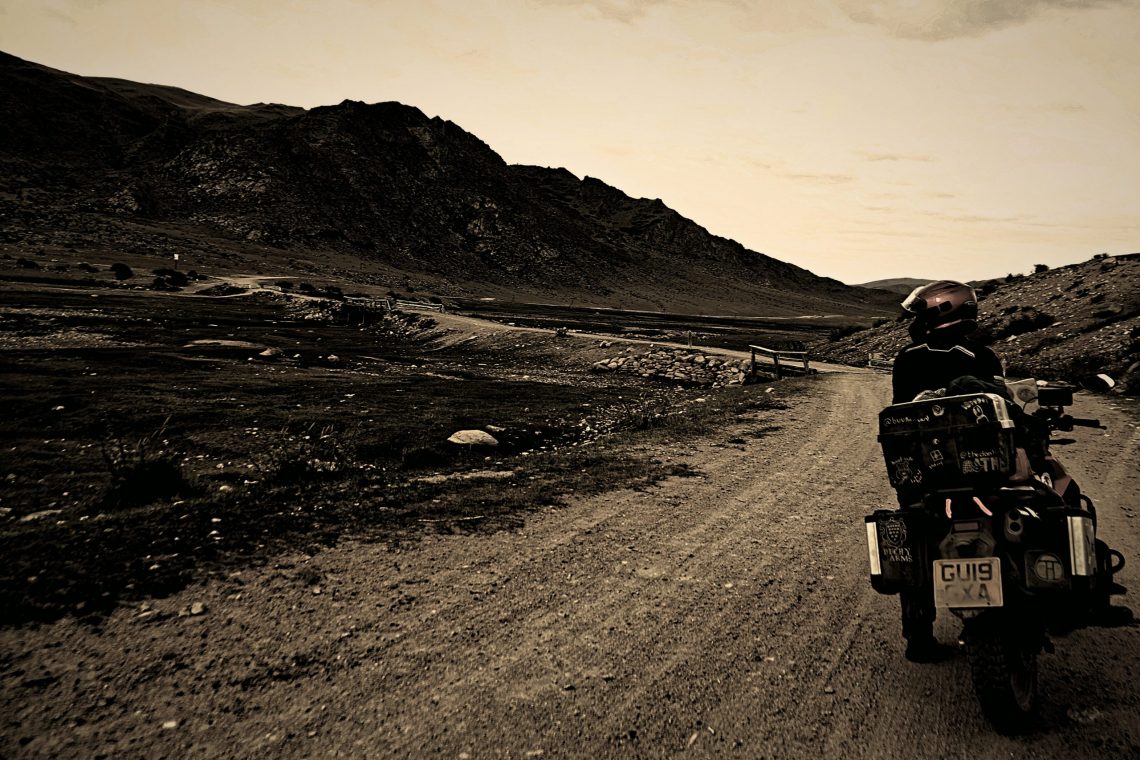 Another highlight was the Pamir Highway, officially known as the M41, which traverses Uzbekistan, Tajikistan and Kyrgyzstan. Riding the Pamir was literally a dream come true, in full honesty it was a quick turnaround dream having only really heard of it during our route planning a few months before, this however did not detract from us appreciating it as such.

Once you settle in and thought you had seen the best it had to offer, it quickly made you eat humble pie as you voyaged over another mountain pass to behold further natural beauty, whether a grey-scaled mountainous region highlighting the rich blue sky or an unyielding view of vibrant grasslands with flocks grazing in their nomadic herds.

Again and again the view changed always keeping you guessing and always providing exactly what you needed. I pray the tarmac never reaches this road and it remains as a challenging refuge for those looking for small slice of adventure. 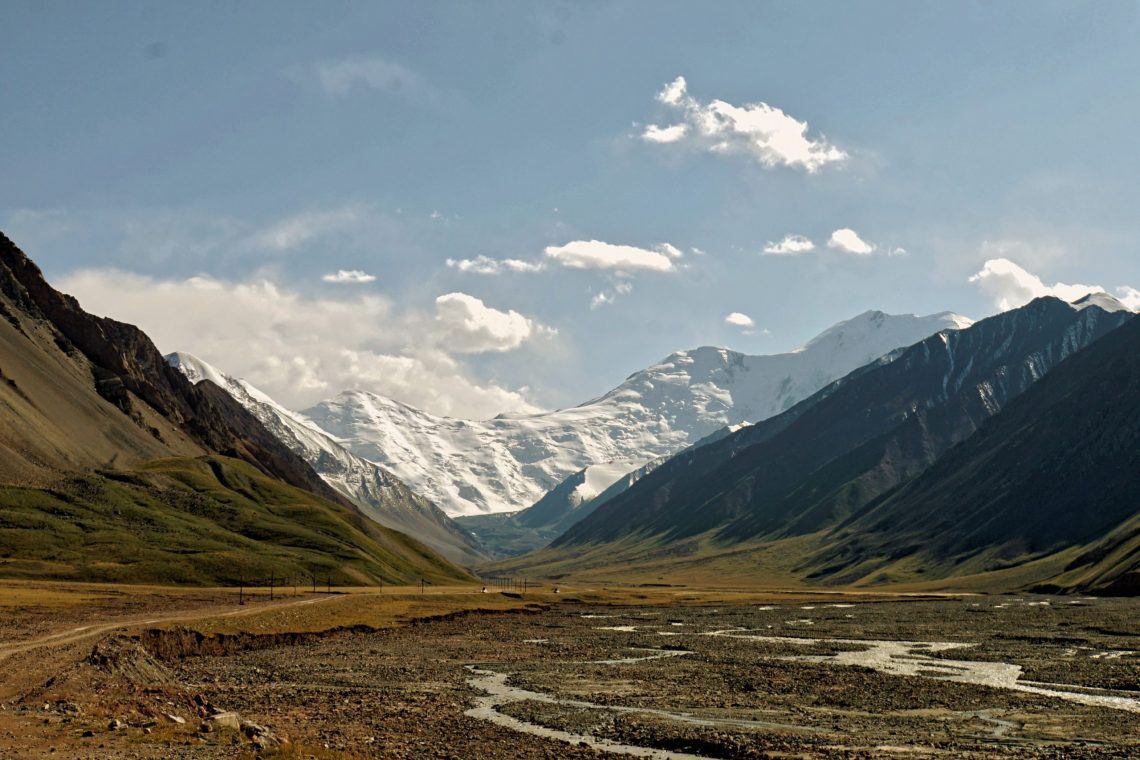 Mongolia ended up being a mixed bag, with us engaging with some people of ill repute on a few occasions which ultimately leaves a bitter taste and dark cloud over the country we had the most expectations for.

A light fingered patron in a cafe took off with my phone while our backs were turned and we were also threatened with violence by three random guys looking for a quick and easy handout/robbery who drove up to our campsite one morning while we were packing up. Standing our ground and a brandishing a camping hammer helped us out of that one.

These experiences aside, Mongolia is ‘bite the back of your hand’ beautiful, with vast landscapes that never end. The world feels larger and your vision seems wider as you gaze out over its wild canvas of rugged tundra, mountains and valleys. 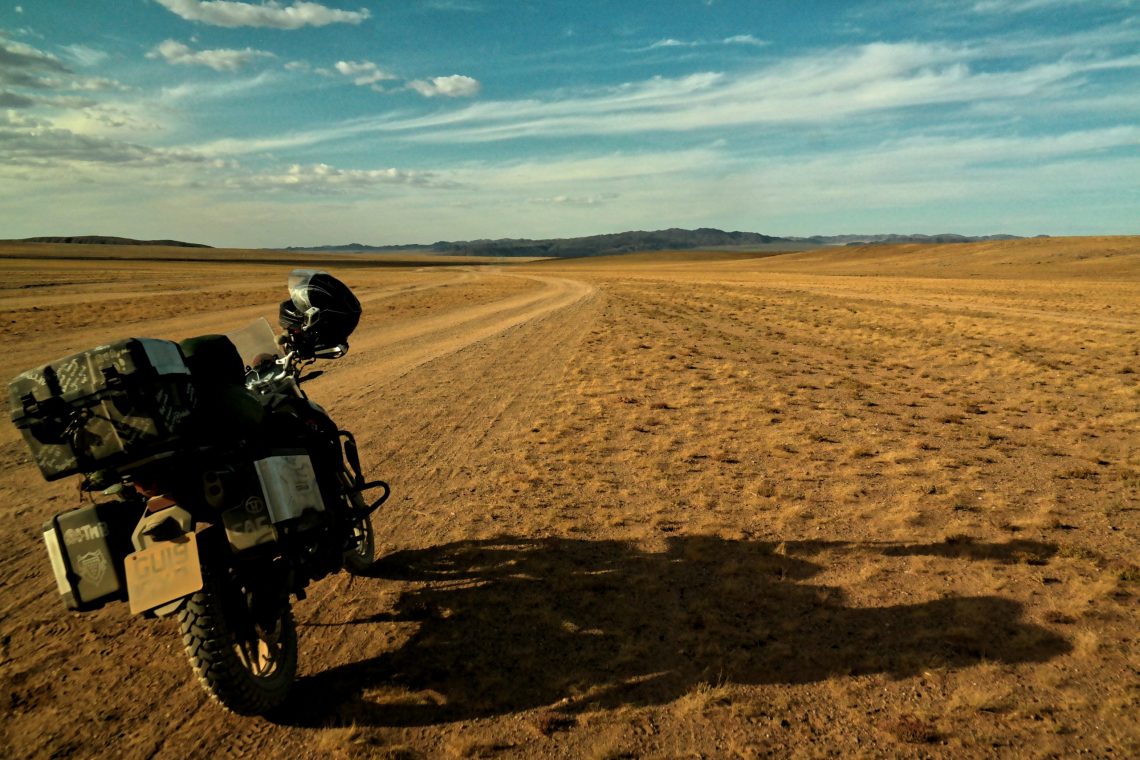 Shortly after entering, we discovered there was an almost complete perfect ribbon of tarmac spanning from the western border to the capital, Ulaanbaatar. We decided at this point to adjust our route, turn off this road head north towards Murun just after Altai.

The days that followed became some of the most challenging to ride and navigate with sand, washboard, gravel and mud with only local tracks to follow and no directional signs. Traversing through these valleys and wilds of Mongolia, we barely saw anyone, including the Nomadic herds and felt accomplished and free.

The real challenge came shortly after when we had left the capital and started to head north, back toward Russia. The main road from Ulaanbaatar to Darkhan was being re-laid, as such a “replacement” road was running mostly alongside. After a long night of thunderstorms, the road had gone from gravel and compact dirt to puddles and mud and sometimes nothing at all but dead ends, causing us to double back to find the right track.

That day we travelled late into the night on mountain tracks slick from rain and muddy, Holly’s headlight bulb had blown and we were both wet, exhausted and could barely see three metres in front with the downpour and just my headlight to guide us.

Several anxious and scary hours later we finally rolled into Darkhan and back onto tarmac for the final time, the end of our off-road adventures on this journey. 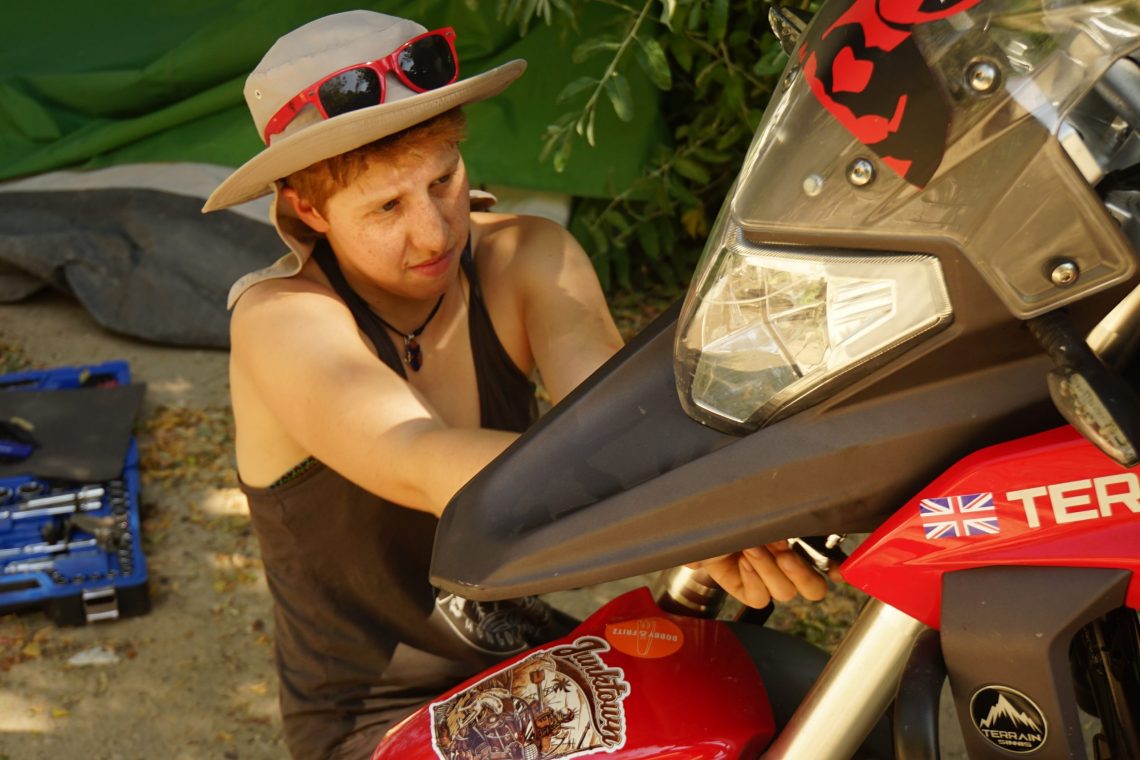 Ups and downs on the road

Any journey such as these comes with negatives that balance on the exorbitant number of positives. Other than those previously mentioned we were robbed while we slept in Ulan-Ude, got stuck on a ferry for 4 days crossing the Caspian sea, spent 12 hours at the Turkmenistan border and I had half of my ear torn off in and accident on the way to the gates of hell! All part of the adventure, all part of life.

The one regret of our journey was at the loss of our photos and video footage when we were robbed in Ulan-Ude. To have these pulled away from us after such an adventure and life goal was heart-breaking.

A harsh lesson learned but one we’ve made peace with…eventually, I still have pangs of “what-if” syndrome on the odd occasion. 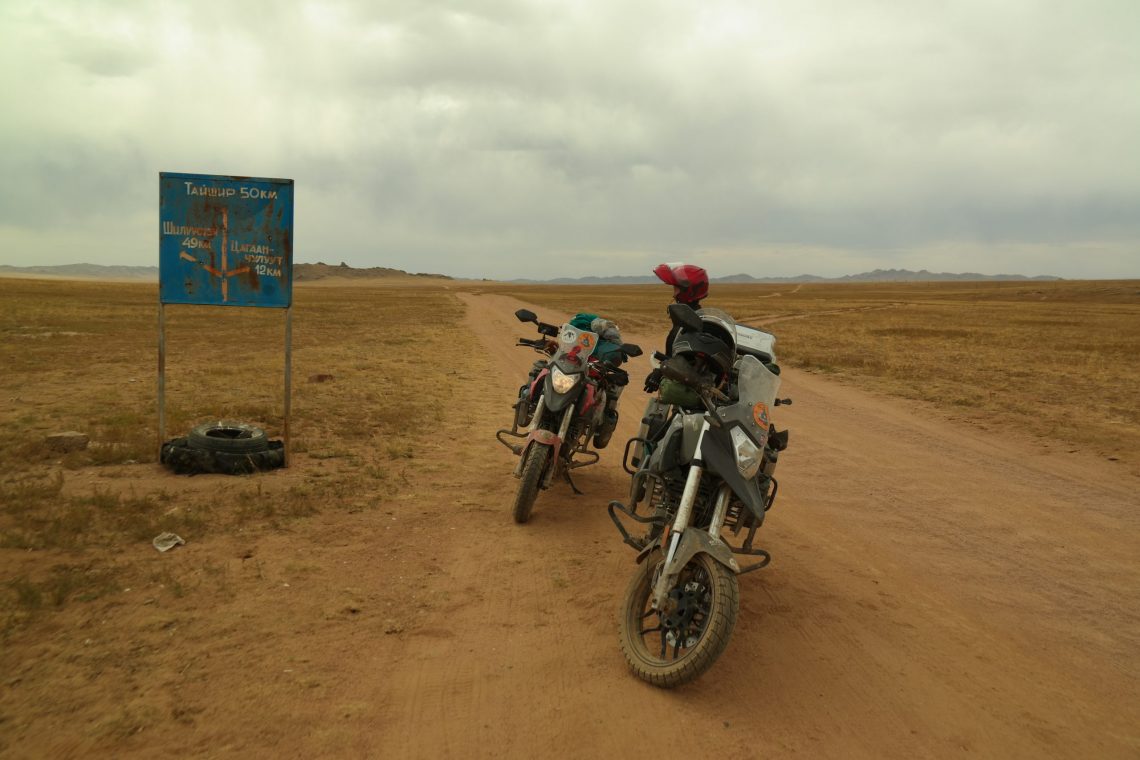 We couldn’t talk about our Rally without mentioning the bikes that took us halfway across the planet. Were they the perfect machines for the job? Being honest, no. But then, that is the point of the Mongol Rally.

They lacked speed on the highways, the seat wasn’t the most comfortable after hours on them and changing the front light bulb is fiddly. Oh, and the front brakes squeak. But these are the extent of my complaints.

Ultimately, the Sinnis Terrain 125 is a no-nonsense, rough and rugged mini adventure bike. It has no advanced electronics, a single cylinder 125cc engine, lights, wheels and it goes, this makes them incredibly easy to work on with just simple roadside tools, other than the fiddly headlight of course. 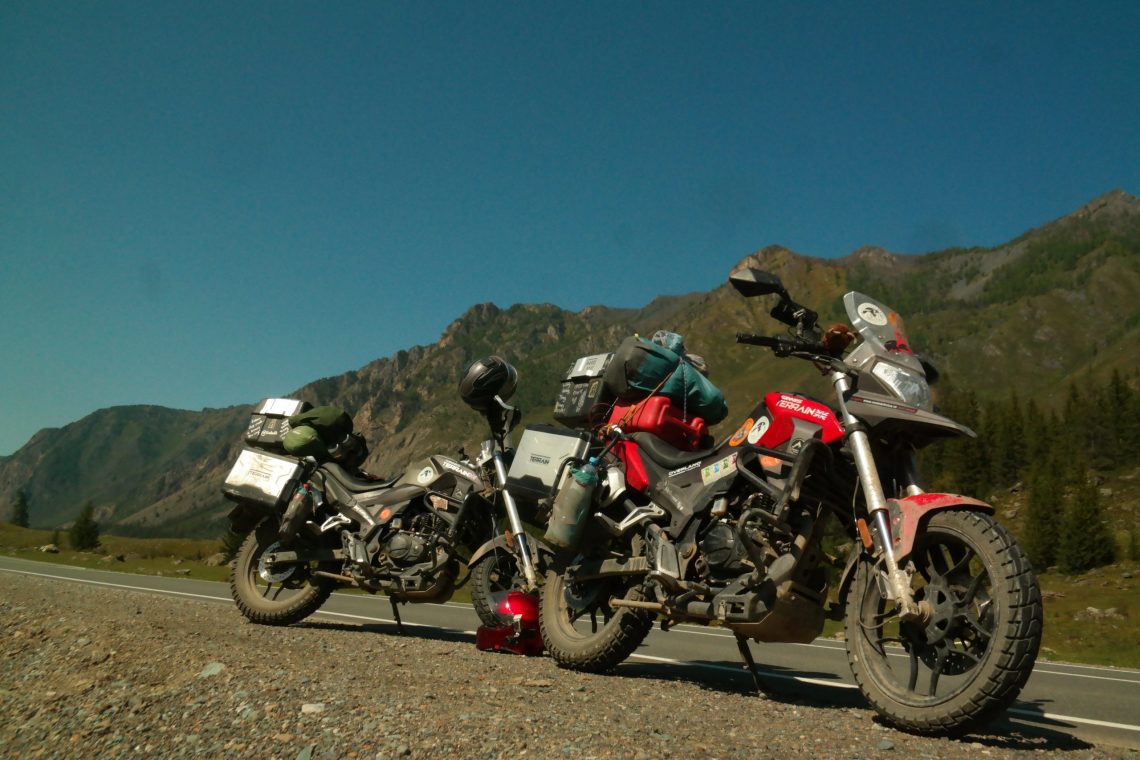 We kept a tally on the bikes of the times we dropped them/came off/had accidents; between the 2 of us we totalled 23, including my horrible 50mph accident in Turkmenistan and the rolls they took on the Pamir. And the overall damage was one mirror, one hand guard, one side-stand switch, one cracked pannier rack and my dashboard’s screw lugs.

The abuse they took was incredible, and they just took it in their stride and kept going without complaint. I’d be the first to admit I was trepidatious about taking the Terrain before the Rally began. An unknown bike into an unknown world was a huge risk, but looking back I’m not sure I can think of another 125 I’d rather have taken now.

All things done would we do the Mongol Rally again? In a word, no. Despite the not so great things that happened to us, we loved the experience, the camaraderie and the different worlds we got to sample. However, we’ve done it now and the next time around it will be a case of slowing down and savouring each and every place we visit and just forgetting about the clocks and calendars on the way. 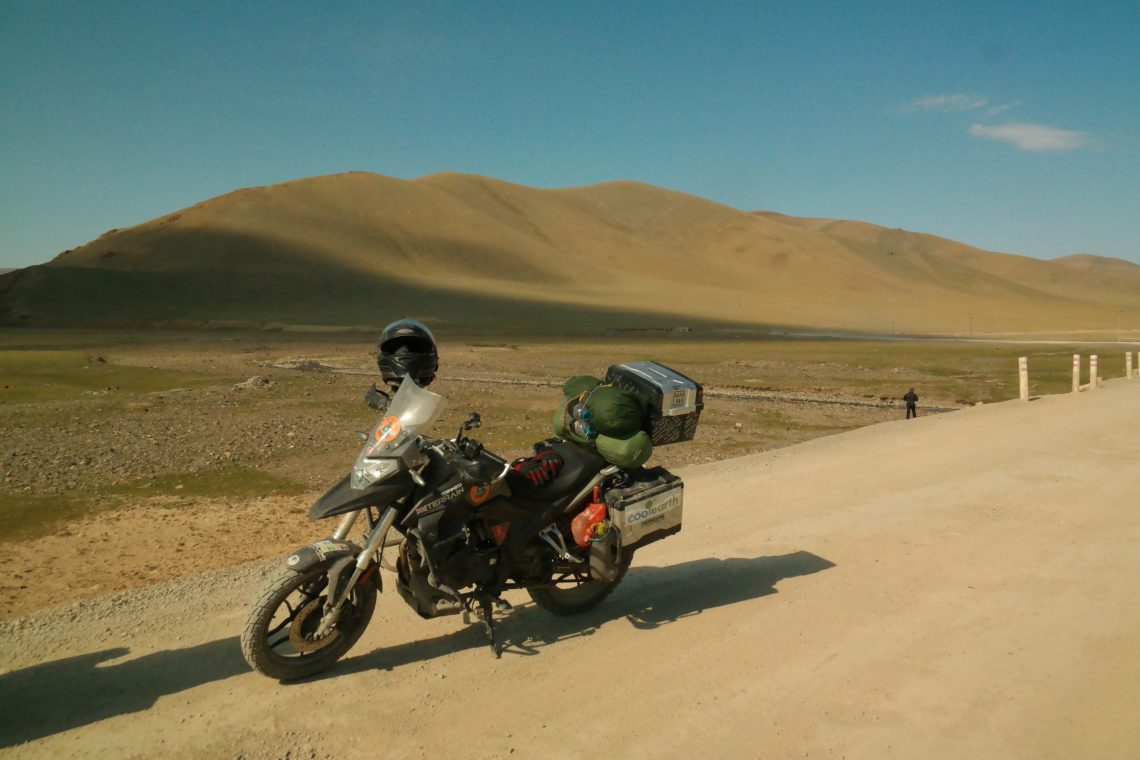 Paul would class himself as a long term biker and adventure seeker, having travelled Europe several times, South-East Asia and riding into the Arctic Circle to Prudhoe Bay, Alaska before taking on the Mongol Rally in 2019. His current day job involves running two indoor climbing walls in Central London.

He’ll also be speaking about his trip on the Adventure Stage at the Carole Nash MCN London Motorcycle Show, on Saturday 15th at 2pm and Sunday 16th at 12.30pm.