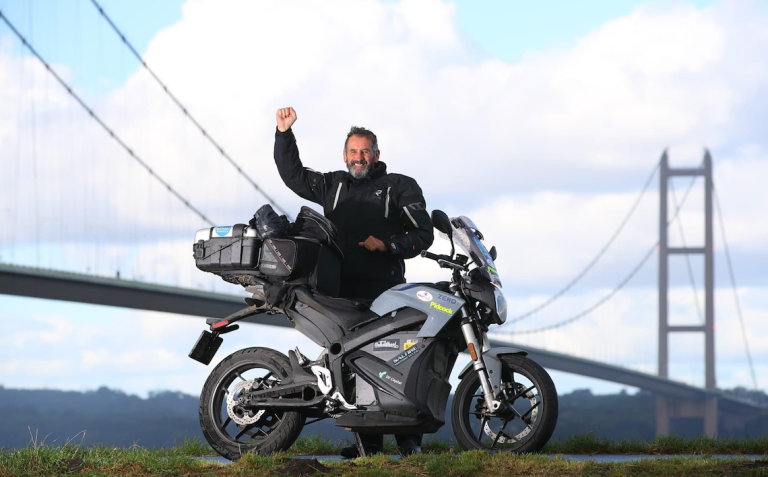 That’s less than your typical round of drinks on a Friday night, and exactly how much two-wheeled traveller and ex-motorcycle racer Curt Langan spent on ‘fill-ups’ while riding his electric motorcycle 5,000 miles around the UK.

After choosing to switch out petrol power for an electric motor, Curt set off from the Humber Bridge back in September 2021 astride a Zero S, with a plan to circumnavigate the UK in just 18 days.

Twenty-one days, 5,000 miles, and countless charges later, he returned triumphant, with one heck of a story to tell.

We caught up with the electric adventurer to find out more, and ask those burning questions that every biker wants to know about touring on an electric motorcycle. 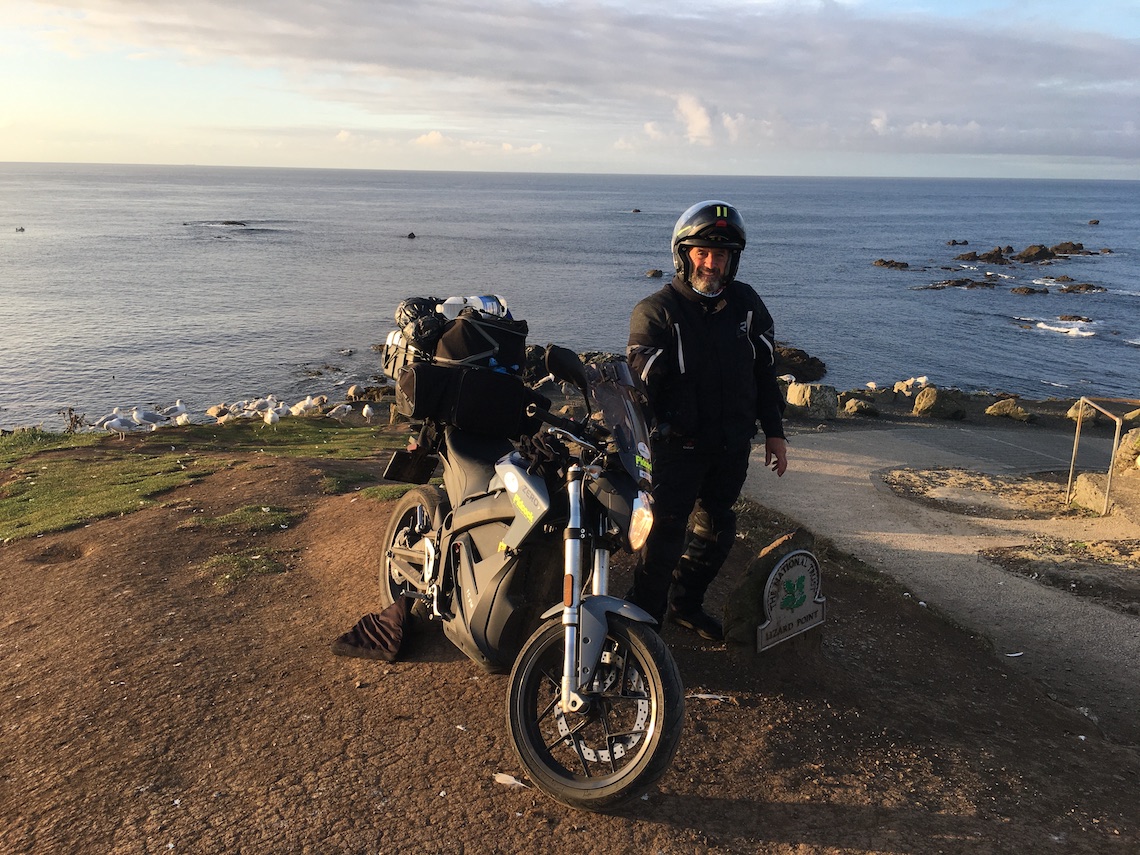 Adventure Bike Rider: Hi Curt, your trip sounds pretty epic. Did you have to add anything to the Zero to make it tour-ready?

CL: The only modifications I made to the bike were adding an optional charge tank, which enabled charging from roadside points. I also fitted a dual USB charger to the handlebars, for keeping my phone and Garmin topped up.

I also had to add an airpad to soften up the seat a bit, as it wasn’t quite comfortable enough for the iron butt days I was putting in. Plus I’ve broken my back four times over my racing career, which doesn’t help!

ABR: What sort of mileage were you doing each day?

CL: I generally covered 250-270 miles a day, and up the west coast of Scotland I managed a couple of 300-plus mile days.

ABR: What was the charging infrastructure like? Did it vary from region to region?

CL: The charging infrastructure is already pretty vast and I never really struggled to find a charge throughout the UK.

In contrast, on the west coast of Scotland there are fewer chargers available, but I’d always find a free one when needed. Charging speeds can differ with these remote chargers though, so I’d occasionally top up enough to get me to a faster one down the road. 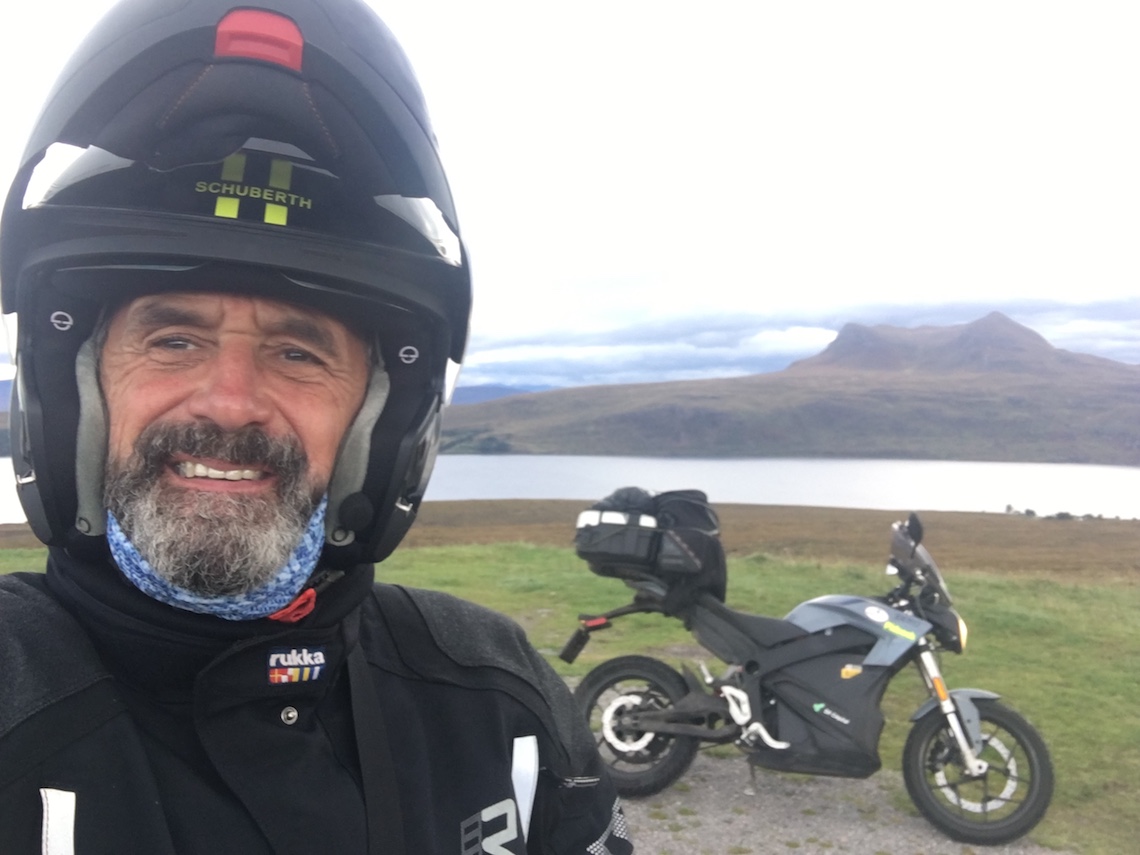 ABR: How different was the experience of travelling by electric bike compared to a petrol-powered one?

CL: Doing the trip on an electric bike threw up a couple of problems. Obviously I had to do a little more planning around the recharging, my aim was to do two charges during the day and then top the bike up overnight, so I had to be a bit more selective in my choice of overnight accommodation.

I stayed in a mixture of B&Bs, hotels, and campsites with electric hookups, and I always tried to have an alternative charging method available in case my host didn’t want me to plug in overnight.

Luckily, 95% of them were more than happy for me to plug into their electricity once I explained the mission I was on. The charging cable got threaded through more letterboxes and windows than you would imagine.

I also loved the lack of gears, which became a godsend in places like Cornwall and Wales. I could just twist and go up and down the hills. And, when it comes to hills, the engine braking and regeneration of the battery meant the range improved, so I could spend even more time enjoying the roads.

As for the actual bike, well, the acceleration is just incredible. While some people are doubtful, I think a morning in an electric saddle experiencing that instant power for yourself would win a lot of bikers over.

Touring on an electric motorcycle 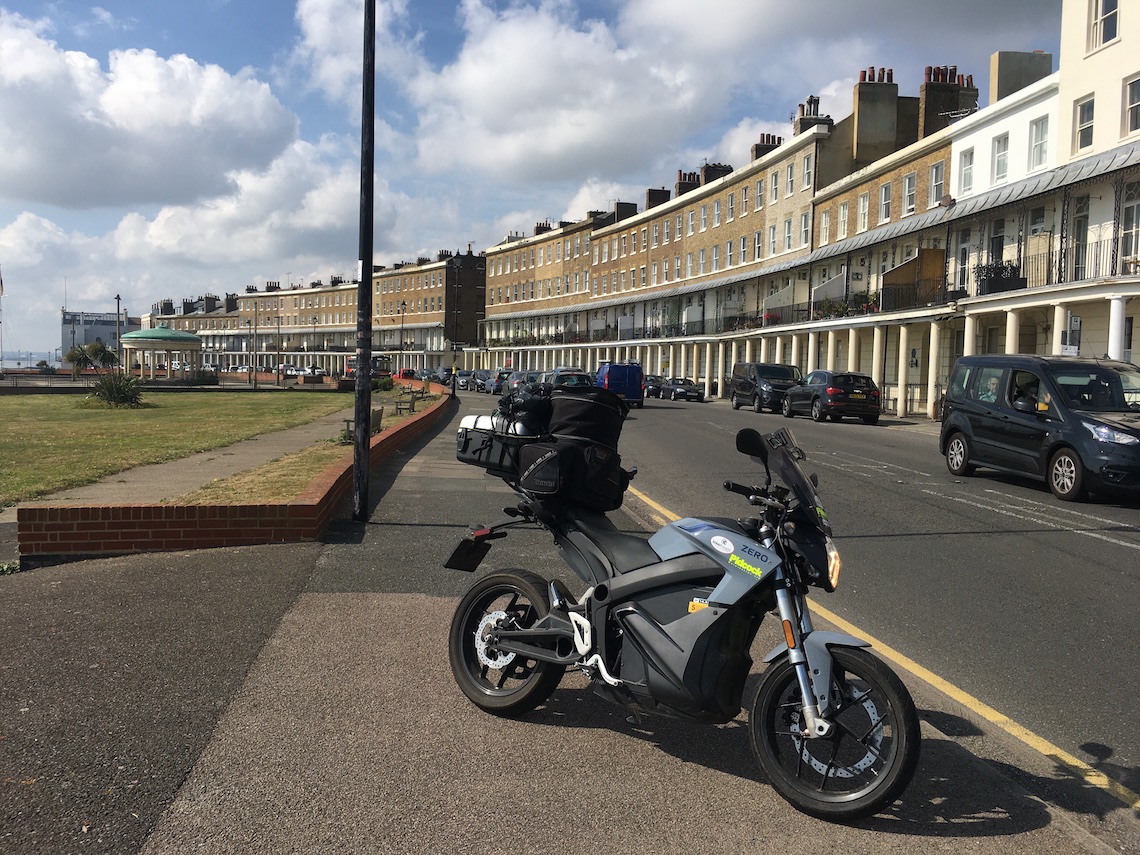 ABR: How did you schedule in your fill-ups? Was it typically when you stopped for lunch or a coffee?

CL: The stops were planned as near to 120 miles apart as I could make them, which is roughly the range of the Zero when riding economically.

I tried to pick a stop that had an alternative available, just in case it was occupied or not working. Some days, if the charge points would allow I found it better to ride in 80 mile blocks and charge for an hour. The overall daily mileage would be roughly the same but it was a bit more relaxing.

Obviously, in the remoter parts of Scotland  it was better to top up whenever the opportunity arose. As, I said earlier, it was best to schedule a meal stop at the same time if possible and kill two birds with one stone.

CL: The overall cost of electricity for the trip came to £18.69.

The reason it was so cheap was the overnight charging at the accommodation and then using the fantastic network provided by Tesco, in conjunction with PodPoint. I cannot praise them highly enough, they are fast, reliable, and readily available.

I would have chosen them, even if there had been a cost. An added bonus was that you could generally get something to eat there too.

And here’s a tip. If you’re planning your own road trip on an electric motorcycle, try and avoid the chargers in car parks as you are also liable for parking charges too.

Travelling around the UK 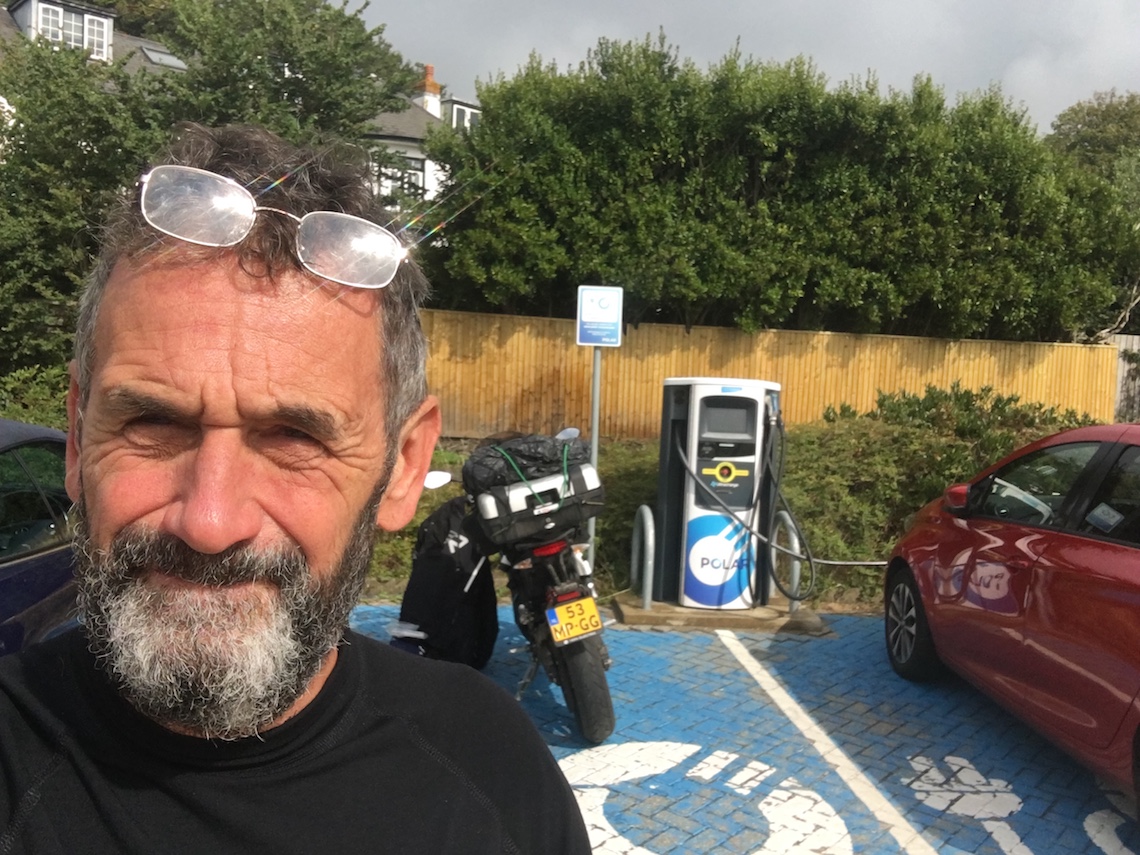 ABR: What were some of the highlights of your ride?

CL: The main highlights of the ride were the all along the south coast from Dover to Exeter. Along some of the stretches I could have been riding along the Mediterranean coast.

I also loved riding the coastal roads in Wales, in fact some of them were as hilly as the backroads I’d explored in Cornwall, which made for a great time in the saddle.

The friendliness and willingness to help that was displayed by people I encountered along the way will also never be forgotten, riding an electric bike provokes plenty of interest and conversation.

ABR: Did you run into any problems on the way?

CL: The weather was pretty brutal. I had a few torrential days, but it was nothing that the Rukka gear couldn’t cope with. On the flipside, because I rode a little slower and less aggressively in the wet, it enhanced the range of the Zero.

A couple of times I arrived at charge points with very little range left, only to find them all occupied. Sometimes this could maybe cost me an hour or 50 miles for the days mileage, which then threw my overnight stops out of sync.

The biggest problem of the ride was encountered in Wales, when I got up on the Sunday morning to a flat tyre and discover the nearest Halfords was 80 miles away. A bottle of gunge slowed the problem, but didn’t cure it, although it got me to Conway Bay where I could pick up a new tyre.

I planned to eat whilst I was charging, and this worked very well in England and I worked my way through the Tesco menu (their charging points are some of the quickest, and free to use). 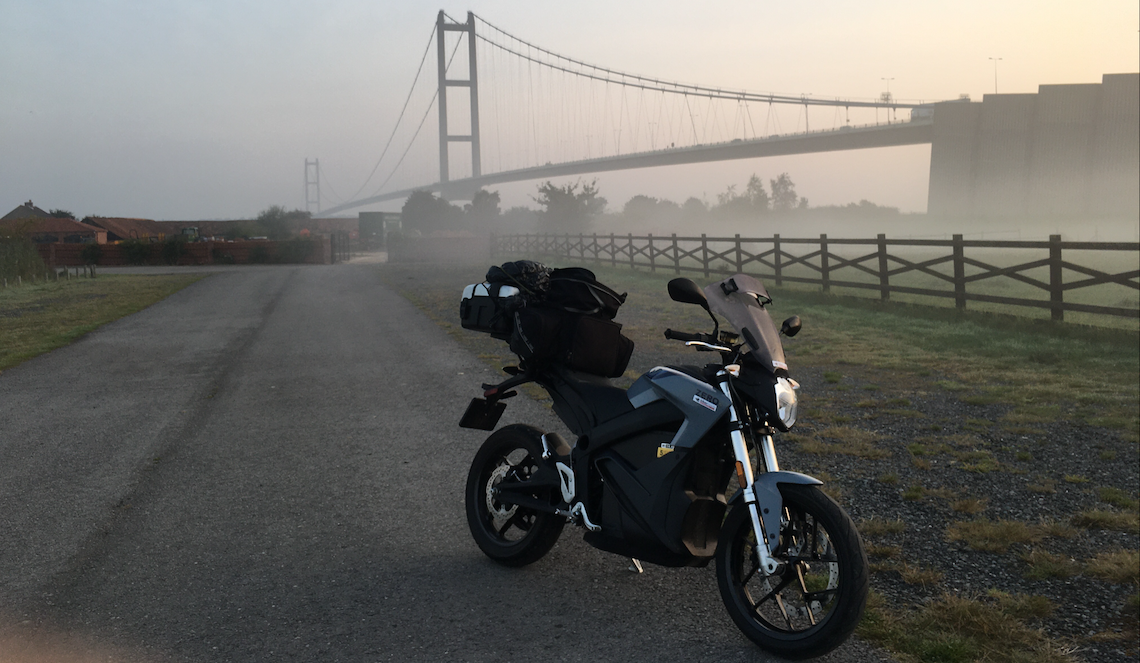 ABR: Electric bikes are still in the early stages of development, so what do you think could be improved on them in the future with travelling and touring in mind?

CL: Whilst electric motorcycles are relatively new, the batteries are getting better and better. Zero batteries for next year have yet another upgrade promising more range and quicker charge times.

With the backing of the government, the exponential increase in the charging infrastructure will only help long distance touring. They’re already there for commuting and, as we’ve proved, with a bit more planning a long distance tour is possible too.

ABR: What’s next for you, do you have any more electric adventures in the works?

CL: Going forward, I have a couple of cycling trips in the pipeline where I’ll be swapping electric power for human power, like the Wild Atlantic Way in Ireland.

As for bikes, next winter I’m looking at a ride from Santiago in Chile down to Tierra del Fuego in Patagonia. To make that trip on a Zero would be awesome.

Curt completed his trip on the Zero S, which he’d adapted for the trip. To find out more about Zero electric motorcycles, head to its website today.

Or, read our full review of the Zero DSR Black Forest, an electric adventure motorcycle designed to handle life on and off-road, on our website here.