An insider’s guide to The Road of Bones 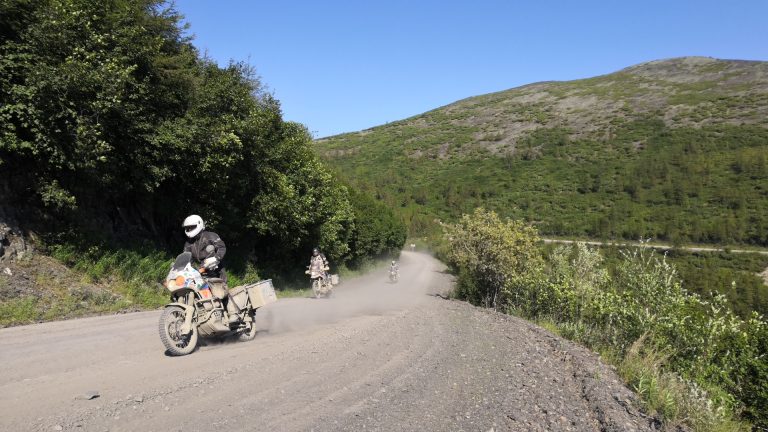 The infamous Road of Bones in eastern Russia is the ultimate test of man and machine for any adventure rider. Local motorcycle tour guide Alex Nikonov reveals what it’s like to ride one of the toughest routes on Earth.

The edge of the world

The Road of Bones is located in the Kolyma region of Russia, an area known for its tough climate and many gulags (labour camps). It’s the outskirts of the world, with most people knowing almost nothing about it. However, among the adventure biking community, the region is famous for its extremely dangerous and challenging roads. The Road of Bones stretches 1,250-miles from Yakutsk to Magadan and has become a bucket list journey for motorcyclists thirsty for adventure.

The road, also known as the Kolyma Highway, was built by the government of the USSR between the 1930s and 1950s almost entirely without machines. Instead, the forced labour of prisoners was used, most of whom were sent to this desolate place as enemies of the state. Conditions were incredibly tough in what is a permafrost area where temperatures can plummet to a perilously cold -50C to -60C. People lived in barracks with little heating, poor food, hard labour, little medicine and a ruthless attitude from the guards. Not surprisingly, many died.

As construction took place on frozen ground, it was very difficult and time consuming to dig graves for the prisoners. Instead, bodies were buried right under the road. From here, the name Road of Bones appeared.

The region was closed to tourists until the collapse of the Soviet Union in the 1990s. When the first motorcycle travellers came to Kolyma, they saw a total lack of any infrastructure, but experienced breathtaking views of nature at its wildest. It provided excellent conditions for extreme off-road riding with only the rider, his bike and nature to explore.

In 2004, Ewan McGregor and Charley Boorman famously came here during the filming of the Long Way Round television series. The show was a huge success around the world and the footage of the pair riding the Road of Bones became iconic. Later Mick McDonald, an Australian rider, came here with friends and made another movie. These rides have helped make the Road of Bones an iconic route for all adventure riders.

Let’s start with the basic information. The Road of Bones is a gravel road from Yakutsk to Magadan in the far eastern region of Russia. Yakutsk is the obvious place to start this ride, but it’s a small provincial city with few airplanes arriving, no cargo planes, and no train connection, so you can’t ship your bike there easily.

You also can’t rent a bike from any local companies. There are no motorcycle shops, no tyre shops, nothing. Vladivostok is the nearest big city where you can buy anything motorcycle related. Most people start their ride here (Vladivostok-Magadan is 3,100 miles) or in Moscow (Moscow-Magadan is 6,800 miles). 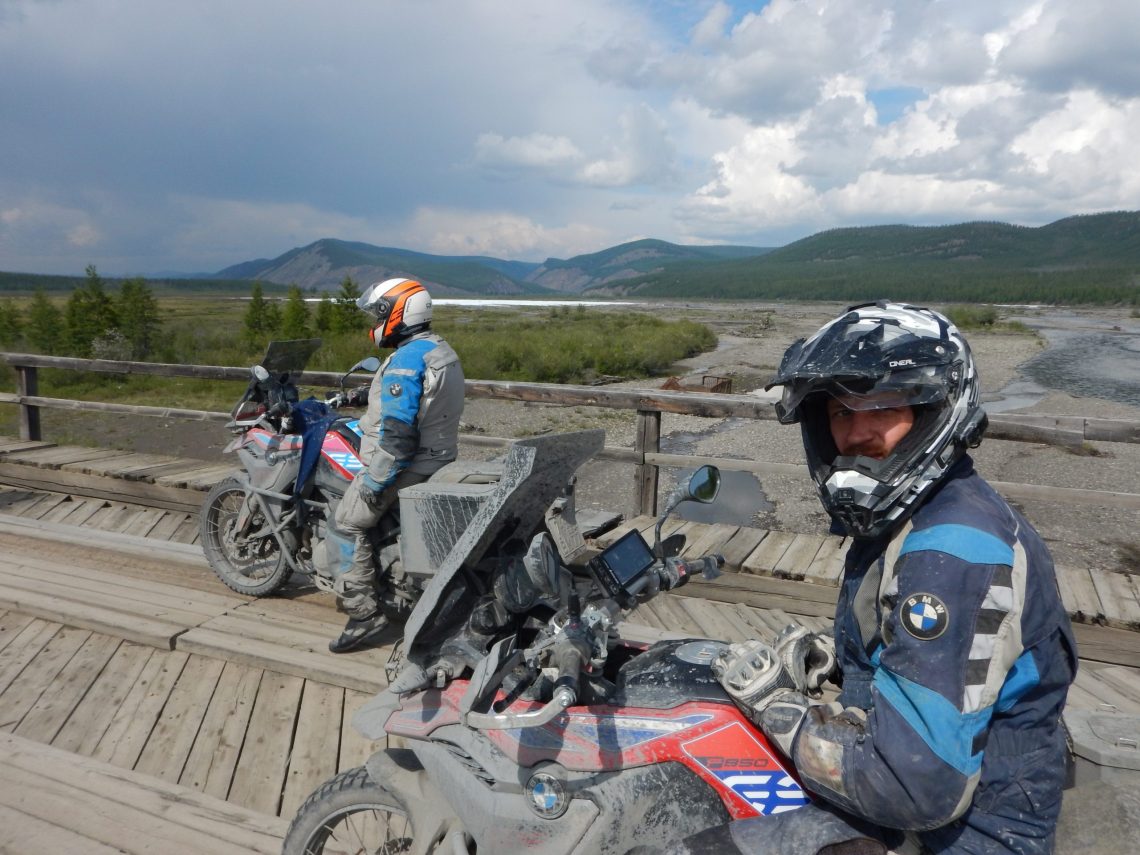 There are several reasons why the Road of Bones is so difficult. First of all, it’s mostly made of small, sharp rocks from nearby mines. These sharp rocks easily pierce motorcycle tyres meaning you’ll spend plenty of time repairing punctures. This is the first problem you will have.

Next comes the dust. It rises like a cloud for hundreds of metres behind any vehicle and you can hardly see anything in front of you. Also, it penetrates everywhere, including inside your helmet and your riding gear. Your motorcycle’s air filter will be full of dust after a few hundred miles, so make sure you have at least one replacement.

There are also several mud sections which are almost impassable in rainy weather, and many sand sections that start suddenly around blind corners. There are also plenty of large rocks to be found in the road

Perhaps the most difficult is the 150-mile muddy section after Yakutsk. If it has been raining, the road will be as slippery as butter. The best advice is to wait an extra day or two in Yakutsk for the road to dry out if you have time. If you can’t wait, it will take you 15 hours to complete this stretch and you will lift your bike hundreds of times.

Approximately 10 years ago, the Russian government decided to upgrade and reconstruct the Road of Bones. This work continues today but it’s still far from finished and it will take many years to make it anywhere near ‘good’. 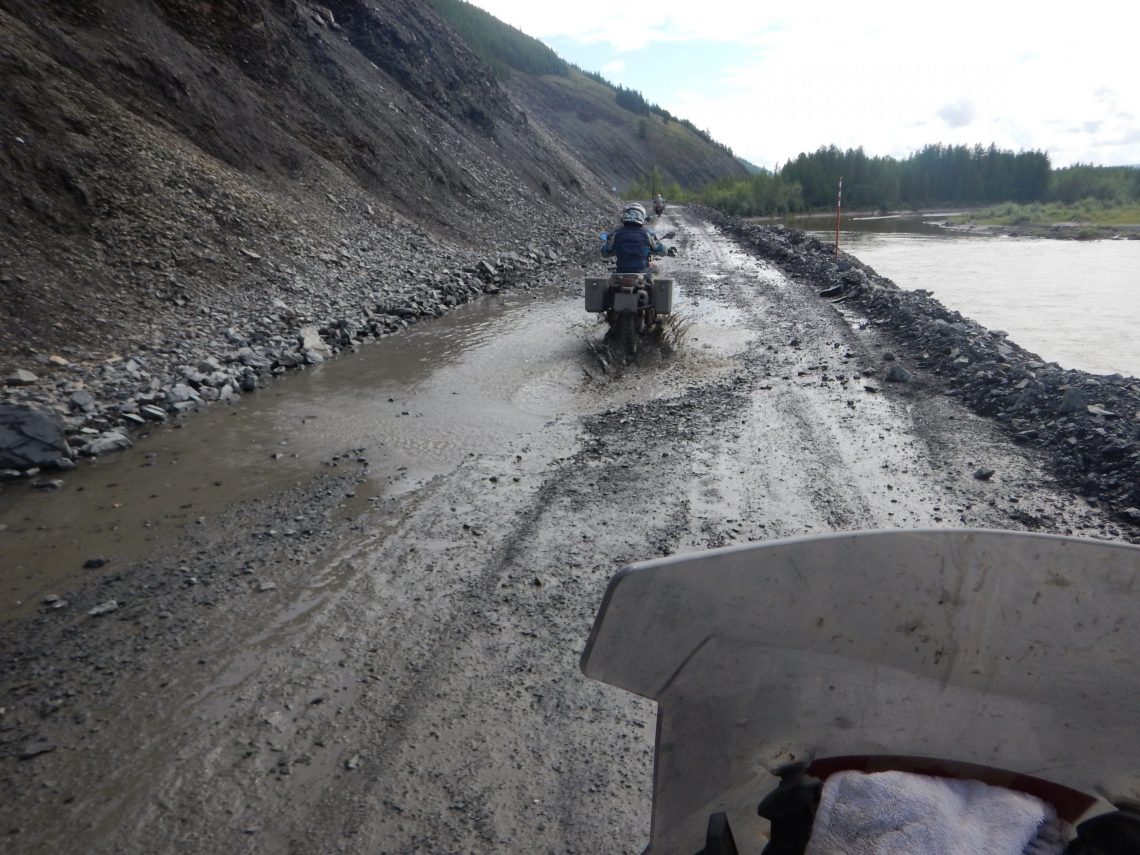 When you enter the Road of Bones you leave civilisation behind. Forget about good coffee, restaurants, or petrol stations with food stores, ATMs and toilets inside. There will be no mobile coverage or internet signal. If you buy a local Russian sim card you will pass small towns and villages every couple hundred miles or so where you may get mobile coverage.

Guesthouses and local hotels are rated one star so you may prefer to camp in the forest. Local hotels aren’t listed on Booking.com or any other website until you reach Yakutsk or Magadan.

There are no big fuel brands in this area and fuel quality is often low. Many small stations dilute fuel with different additives to increase quality, but that doesn’t really work. There are also no garages or motorcycle shops. If something happens with your bike, you must be able to fix it with what you have.

It’s best to have £500 to £700 changed into local rubles. You will need cash as nobody takes credit cards and there are no ATMs.

The weather here is forever changing and unpredictable. Summer runs for a two-month period from the end of June until the middle of August. Temperatures during the day can reach 15C to 20C. At night, it usually falls to 5C to 7C. However, temperatures are often changeable and don’t be surprised to find it can snow on any day.

Another difficulty you may experience due to the weather is high waters in swollen rivers following periods of heavy rain. Because the earth is frozen, rain can’t soak into the ground. This means the level of water in the rivers and streams quickly rises. Within a few hours a small stream can become a river with a strong flow. There’s no need to explain what happens if you drop your bike there! 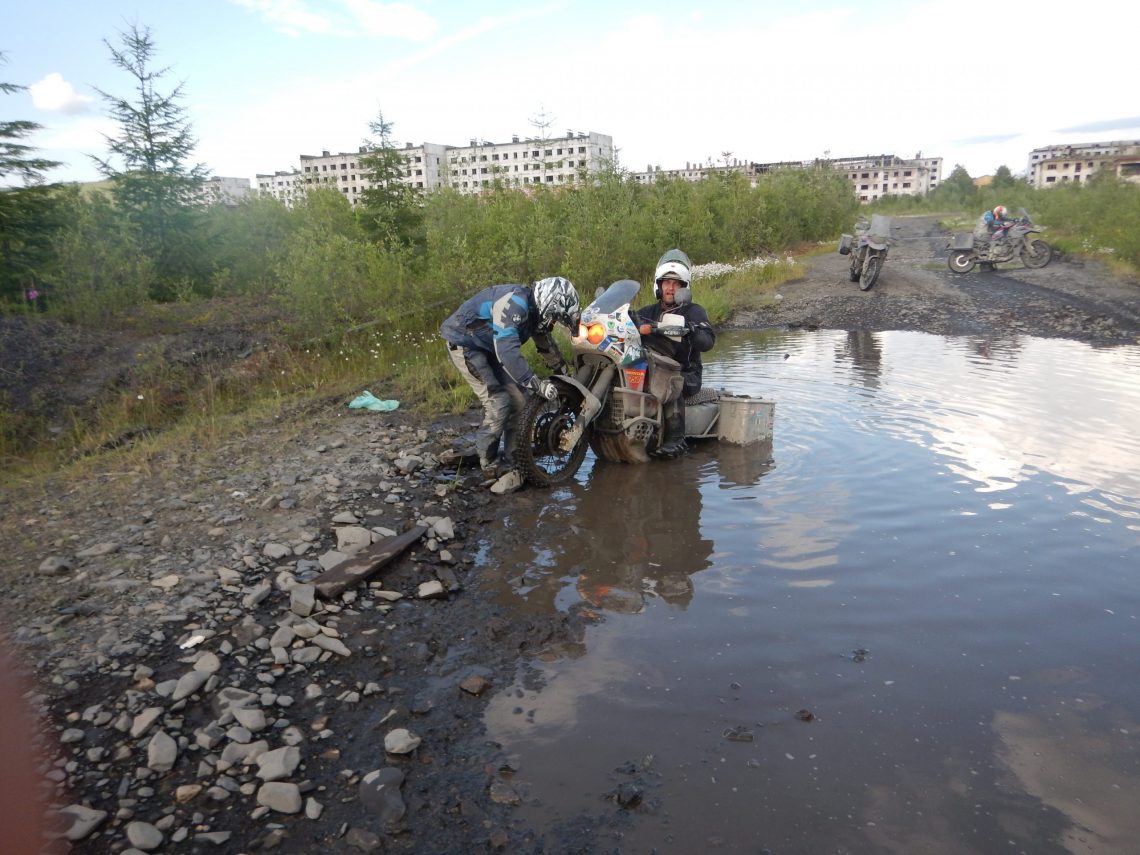 Safety on the road

There are several police stations in small towns on the route, but they are located so far away from each other that locals happily drive cars without registration plates, driving licenses, and sometimes even drunk.

Although people in Russia are known to be very friendly and helpful, the Kolyma region is an exception. Many locals are cocky and can be aggressive. They may ask to sit on your bike, to give them a ride, or drink with them. It is strictly recommended to stay inside during the evening at your hotel, or to camp outside of town.

Some people like to ride solo. We respect your choice, but we would strongly recommend taking a friend with you on the Road of Bones. It’s not safe to ride such a challenging route alone.

Always be focused. Hard gravel roads can quickly become sandy with big rocks in the middle. If you break your wheel, you won’t be able to get it repaired or buy another one. 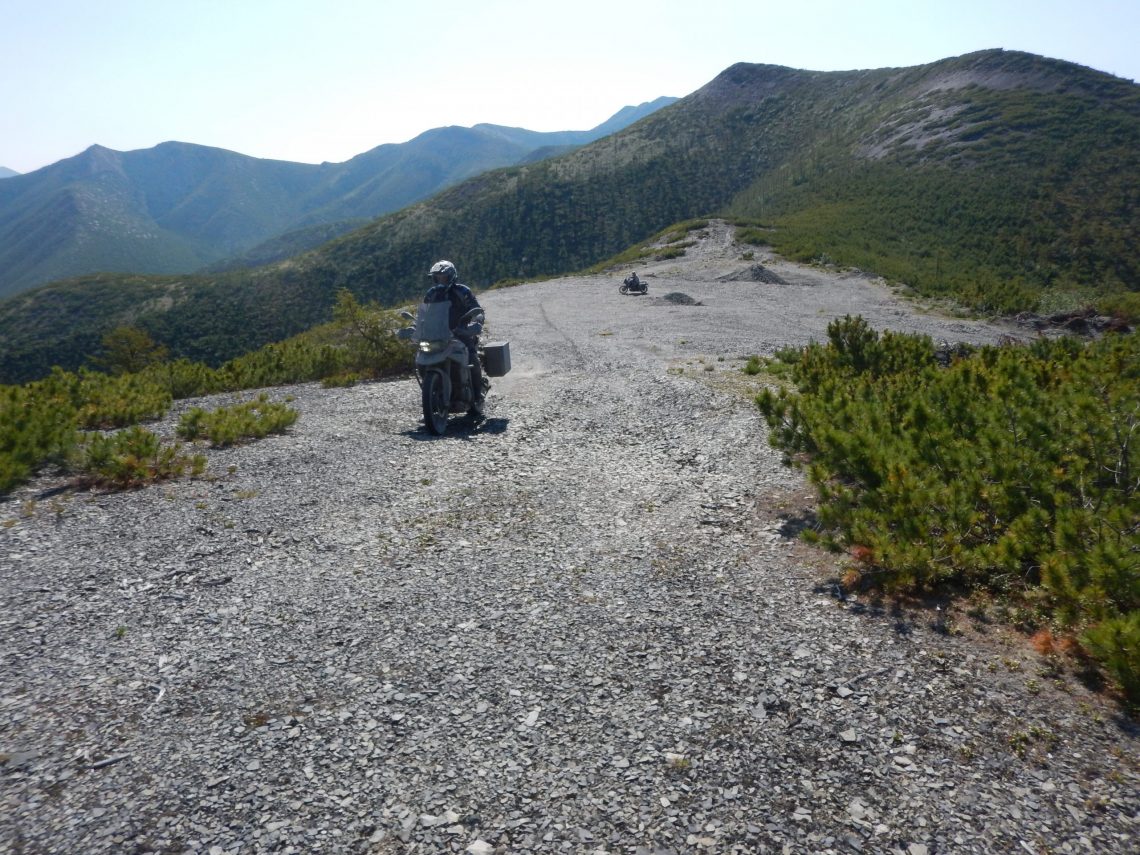 As you can see, there are plenty of reasons not to ride the Road of Bones, but the danger and sense of adventure is what attracts so many bikers to take on the challenge. It is a dream route for many that is achievable if you are prepared.

Riding the Kolyma Highway is a chance to escape from the stresses and strains of daily life. Hide in the forest without internet, social media or phone calls. If you ride with other people you will come to rely on each other and deep bonds will form. Extraordinary people ride the Road of Bones, and you will forge friendships with them.

It is a test of stamina, strength and endurance for you and your bike. Doing it will bring a satisfaction akin to running an Iron Man. It truly is a life-changing experience that will make you look at life differently. You will start valuing simple things because, after many days in the forest, you’ll realise how happy a regular cup of coffee can make you. 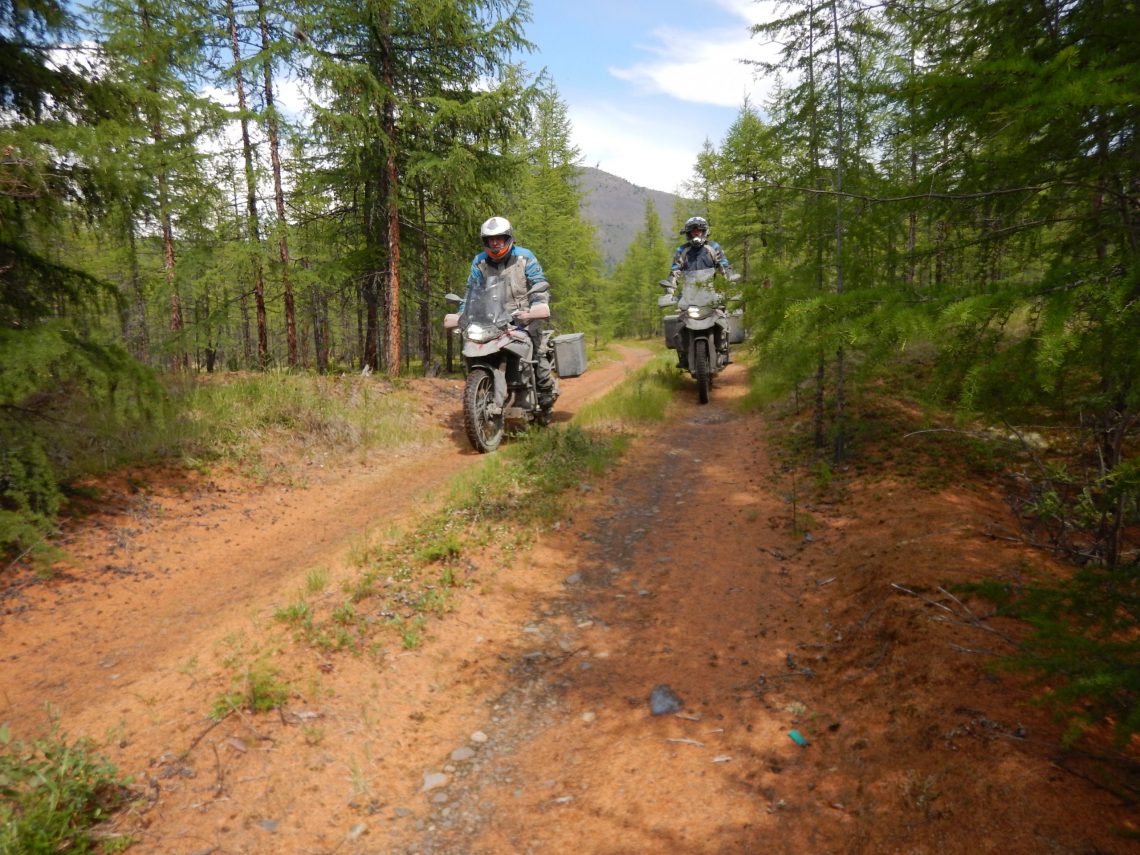 First and foremost, be good at riding on gravel roads. Train before you go. You must be able to ride from six to 10 hours each day off road.

Before the ride begins, make sure you service your bike properly. Replace all parts that could potentially require changing such as the chain, filters, oil seals, and oil. Take spare parts like extra tubes, an air filter and a chain. Also, take a good pump and an extensive number of repair kits with different patches and glue.

It’s important to learn basic motorcycle maintenance like changing oil, fixing punctures and replacing filters. There’ll be no internet so you can’t check YouTube to learn how to do something, and there are no motorcycle garages where you can ask for help.

A small bike is better than a large bike on such difficult and changeable terrain and it will be easier to pick up when you drop it. Spoked wheels are better than alloy wheels because they are tougher and more durable.

Ignore anyone who says you don’t need one. We have tested expensive ‘waterproof’ textile suits on the Road of Bones and they leak during heavy Siberian rain. Also, take a good helmet, touring or enduro boots, warm gloves and a wind stopper.

I’d recommend taking a satellite phone which will prove helpful if you need urgent help. Also take a GPS tracker so your friends and family can keep updated on your progress. 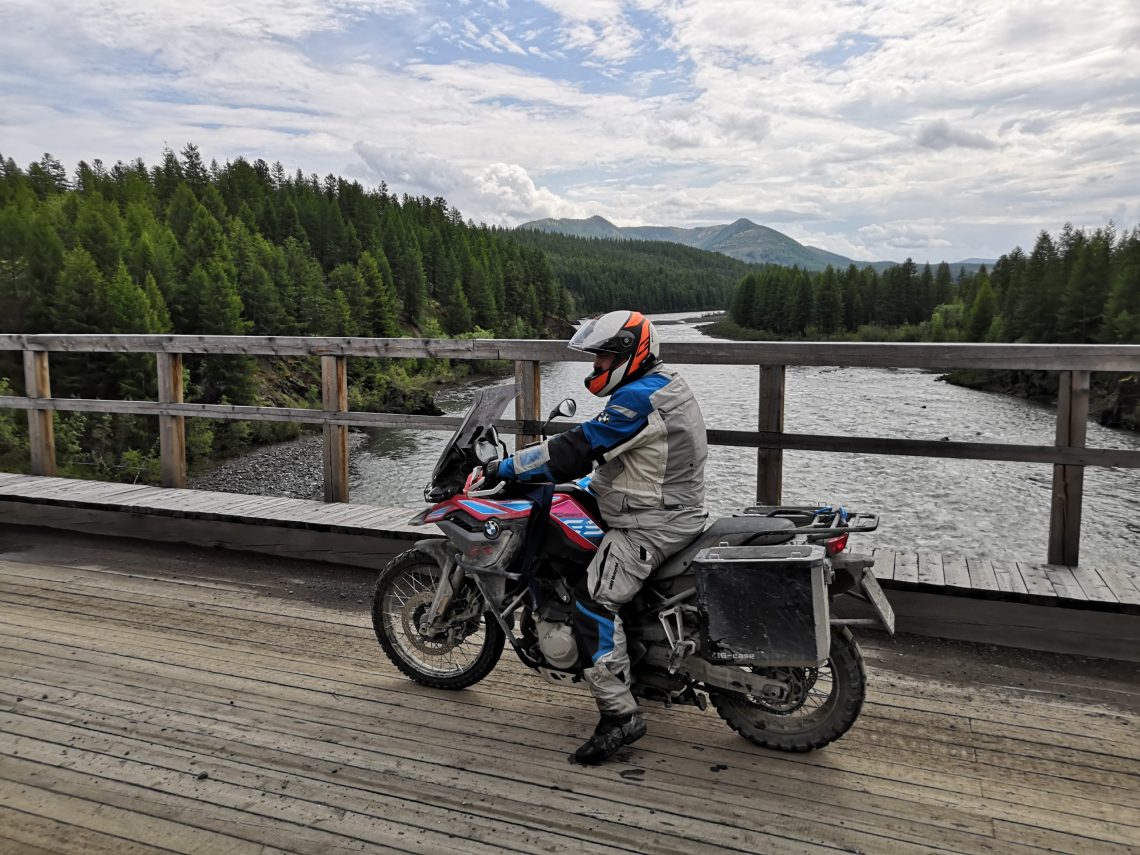 Should you ride the Road of Bones?

There’s no getting away from the fact riding the Road of Bones is a tough ride. But it will also be one of the best experiences of your life. It’s not easy, but there are few roads in the world that offer up so many opportunities for adventure.

You will cross great Siberian rivers and pass areas where few people live, amid spectacular landscapes. It will certainly be a challenge and a bit risky, but in the end, what is life without adventure?