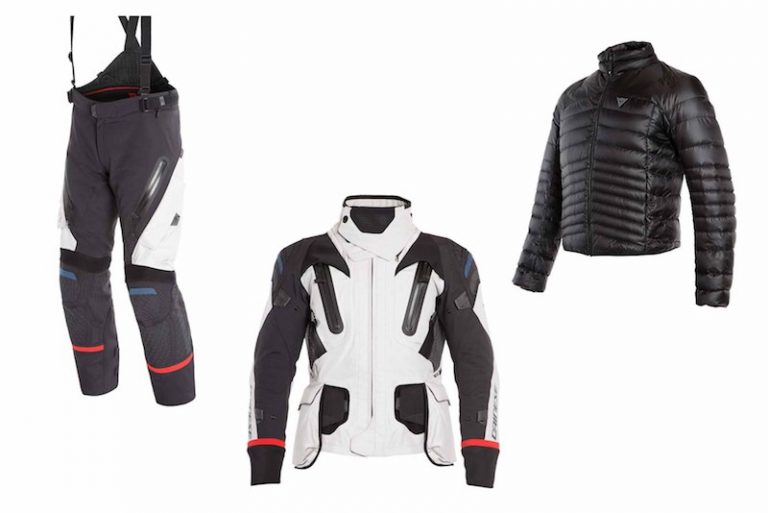 Revealed this morning in Cologne at Intermot, the new collection includes numerous full suits, jackets, trousers, boots, gloves, and more. In addition to this, travel accessories were revealed that include a first-aid kit and motorbike cover.

Taking inspiration from the time Dainese collaborated with Massachusetts Institute of Technology (MIT), where the company helped work on bio-suits for the Mission to Mars programme – due to take place in 2030 – the brand-new gear is designed to take on “every imaginable motorcycling adventure”.

While you may not be venturing to Mars anytime soon, the technology behind the suits is certainly impressive. The knowledge garnered by the firm has reportedly contributed to the jacket’s ability to take on the most extreme of weather; be that ridiculously hot or blistering cold.

A stand-out ensemble that grabbed people’s attention was the Antartica adventure jacket and trousers. Priced at £1,299.95 and £749.95 respectively, the outfit has been made with the newly patented ‘Trixior’ material, offering a much higher rate of abrasion resistance. On top of this, it comes with an external lumbar belt and a removable inner goose down jacket that helps to retain heat.

In the brand’s first visit to Intermot in 10 years, Dainese released an interesting video (see below) that talks about its new creation process. The video begins with cinematic shots of the planet Mars before a man begins to narrate in a Hollywood style:

“There is nothing more unexplored, unknown or deeply inspired than this dark infinite out of space. Humans look up at the sky and travel with the imagination on unimaginable journeys.”

The video surrounding the new technology continues with the powerful statement: “A new generation of motorbike touring garments have been born. Made for the unlimited, no matter the road. We are ready to explore it.”

Dainese also announced the Gran Turismo jacket and trouser combo, which is aimed at more road-based bikes. The gear with a laminated Gore-Tex shell, which is something we have spoken about before.

The brand also announced an update to its airbag technology, which will now see separate male and female-oriented options on the market.