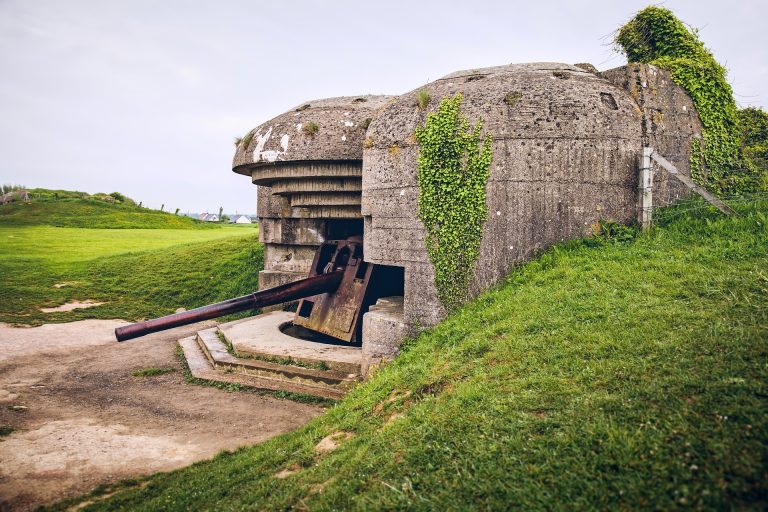 There are a number of well-preserved and notable D-Day sites to visit on the northern coast of France, D-Day being the name given to the largest seaborne invasion in history that was launched on Tuesday 6 of June, 1944. Many of them are just a stone’s throw from the French port of Cherbourg, which is served by the Brittany Ferries route from Portsmouth and Poole, and can be visited over the course of a two or three day tour.

This is why Normandy has become such a popular destination with British bikers looking for a tour close to home, while paying their respects to those involved in the assault that ultimately led to the establishment of the Western Front in WWII, the splitting of the German defensive efforts and the victory of the Allied forces.

With France offering a mix of fantastic riding country, beautiful places to stay and thought-provoking stops on the way it has quickly become the go-to destination for those with a little less time on their hands. Below we’ve assembled six of the most important, poignant and thought-provoking places that any biker looking to tour the D-Day sites should visit. 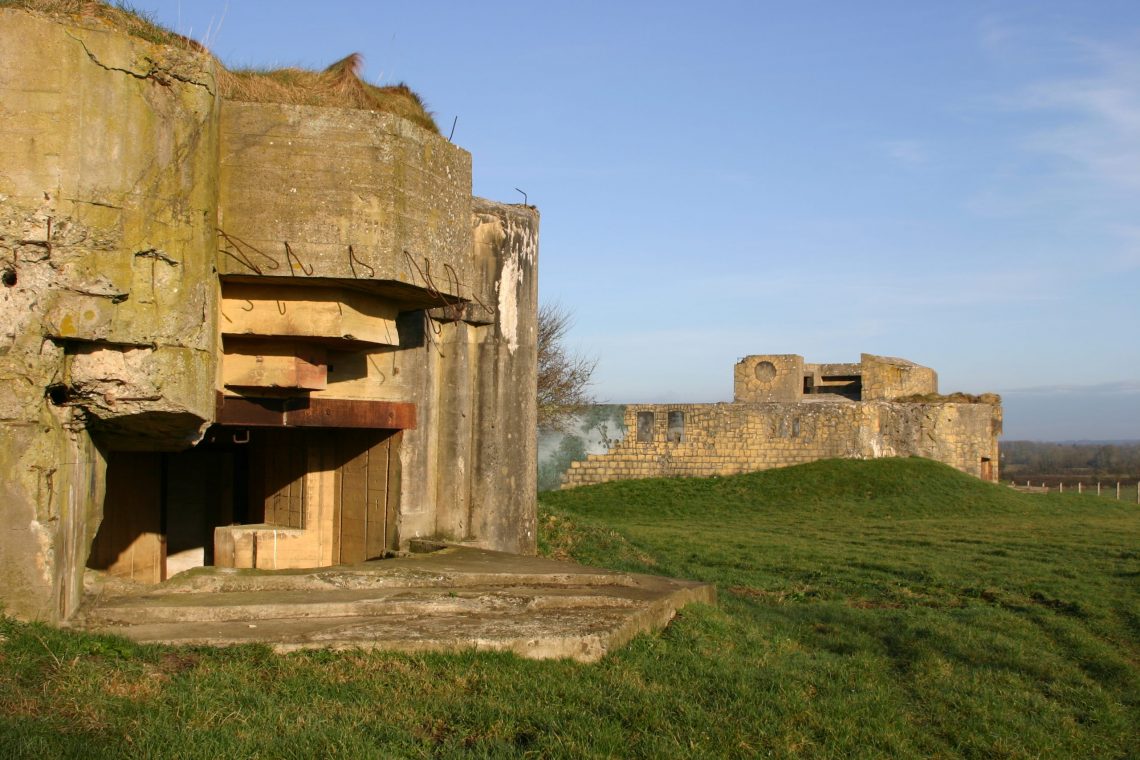 Closest to the port lies a German artillery battery located close to the French village of Azeville. It was part of the larger Atlantic Wall coastal fortifications that Hitler had ordered to be constructed in anticipation of an Allied assault on north-west Europe. The battery shelled the nearby Utah beach, before eventually falling to American forces three days later.

The bunkers have been preserved and can now be explored, as well as the tunnels that link the fortifications together, with the assistance of an audio guide. One fascinating feature is a hole punched through a bunker by an unexploded shell fired from USS Nevada, giving you a brief glimpse into the ferocity of fighting that those few during D-Day experienced. 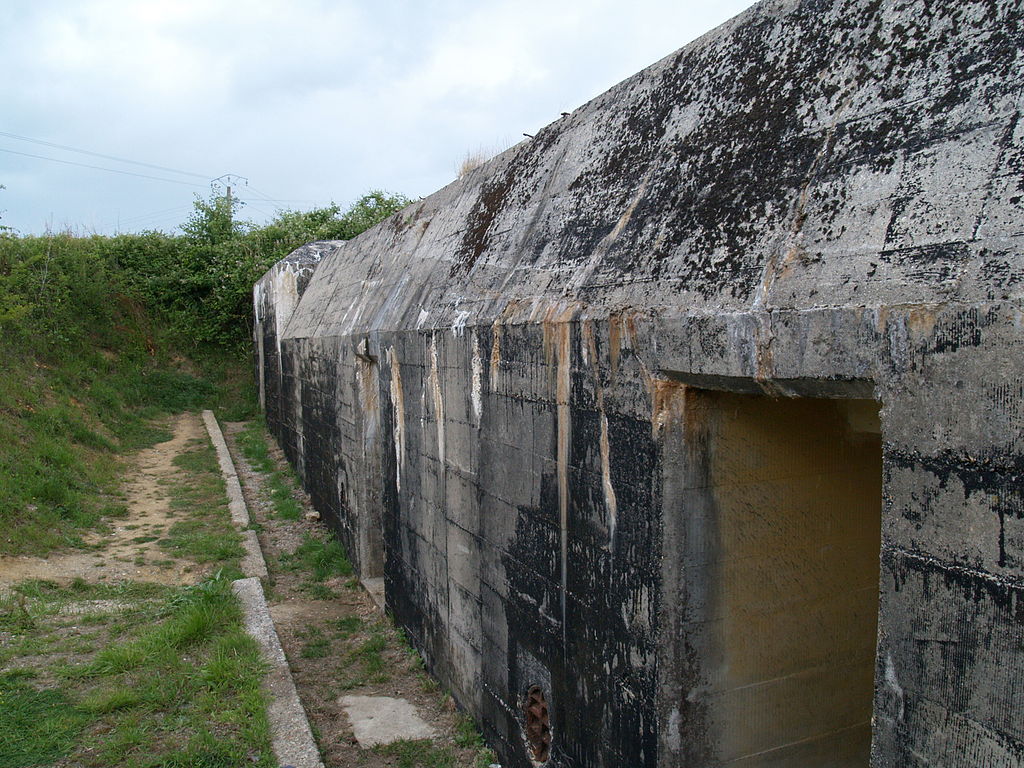 Leaving the Azeville Battery you’ll be treated to a picturesque ride on typical empty French roads along the coast with many of the prominent beaches of the Normandy landings to your left. Our next destination takes us to the Maisy Battery, one of the largest German defensive positions in the landing area of Normandy.

The Maisy Battery was actually buried at the end of the war, before eventually being uncovered in 2006 and opened to the public.

The restoration of the battery has opened up a warren of trenches and bunkers to be explored, over 2km in total, and with it’s burial and subsequent rediscovery, the battery is almost as it was over 70 years ago. With an extensive display of WWII cannons, howitzers, landing crafts and other vehicles it’s a comprehensive living museum of D-Day, and certainly a must-visit for anyone looking to explore the area. 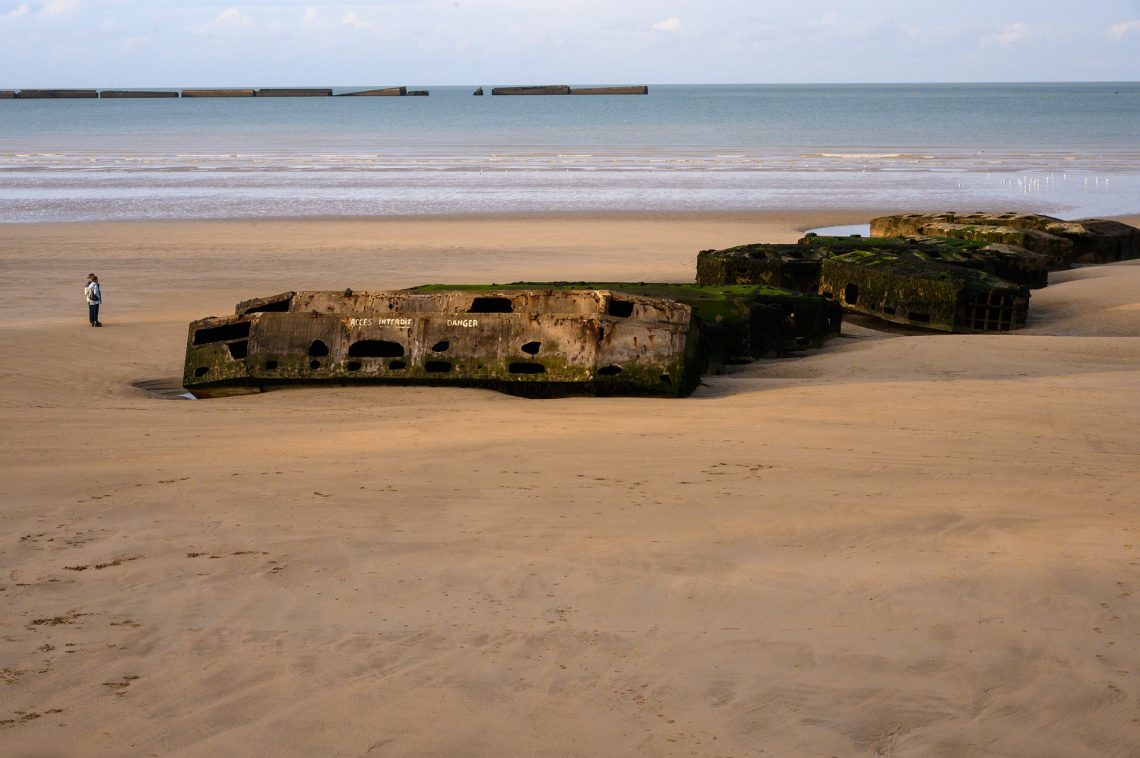 The numbers behind D-Day are simply staggering. On 6 June alone, nearly 160,000 troops crossed the English Channel, while by the end of June nearly 875,000 troops had landed on the shores of France.

The infrastructure and planning behind this operation is remarkable, as is the ingenuity of the engineers tasked with making it possible. This is where the Mulberry Harbour enters the story, the remnants of one of which is still present in the sea close to the town of Arromanches-les-Bains.

The Mulberry Harbours were built in pieces in England, before being assembled off-shore a few days after D-Day.  They served as temporary harbours designed to bring ashore vehicles, troops and supplies while the better defended major ports in the area were still being fought over.

Port Winston, as the harbour off the coast of Arromanches is known, saw 500,000 vehicles use it to get ashore during a 100 day period. At low tide the blocks supporting the piers are visible, while elements of the harbour are can be seen further out to sea. 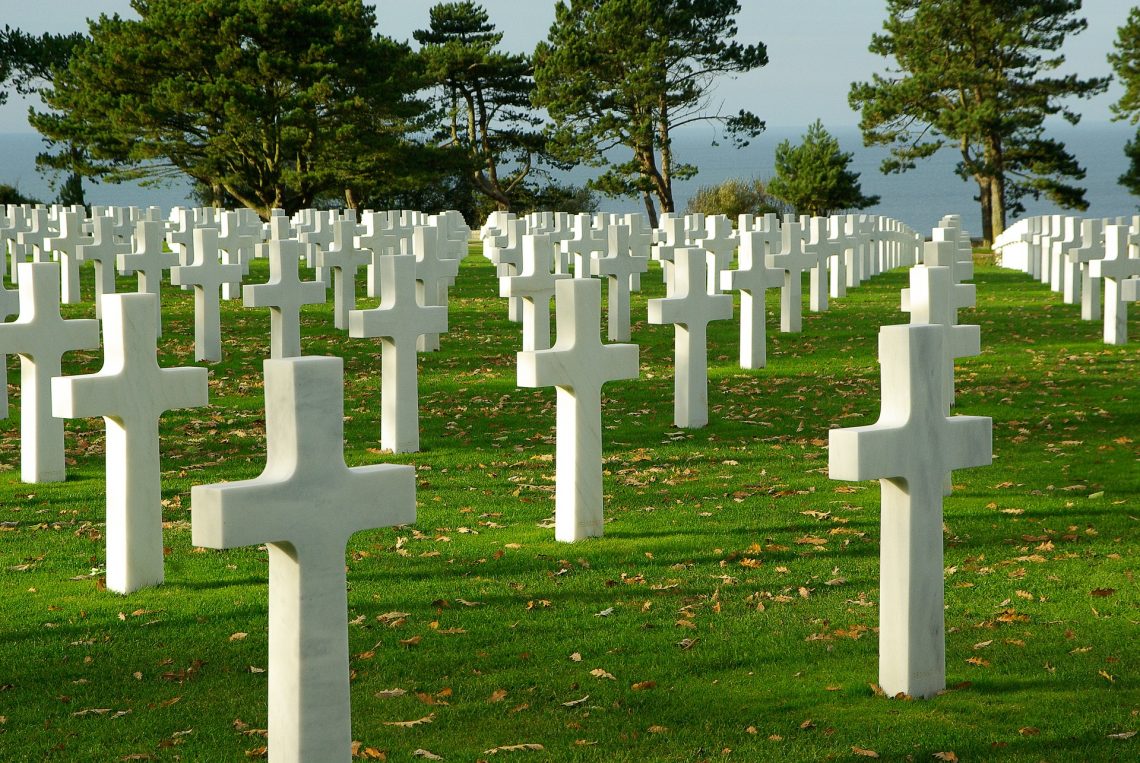 This 5 mile stretch of of the Normandy coastline was one of five sectors targeted during the initial landings. The responsibility for it’s capture fell primarily on the shoulders of soldiers of the United States army, who found themselves up against some of the fiercest and most heavily fortified resistance on the entire Atlantic Wall.

Memorialised in the acclaimed WWII war film, Saving Private Ryan, the landings on Omaha Beach have come to define the ferocity of the battle for the coast and the ultimate sacrifice given by the men who knew turning back was not an option.

Omaha Beach is now home to a poignant reminder of these sacrifices in the form of the American Cemetery at Colleville-sur-mer, with neat rows of gleaming white tombstones positioned on top of the bluff overlooking the beach where many of the German defensive positions had been located.

Close by lies the Overlord Museum, providing a historical context to the area and chronicling the period of time from the Normandy landings to the liberation of Paris. 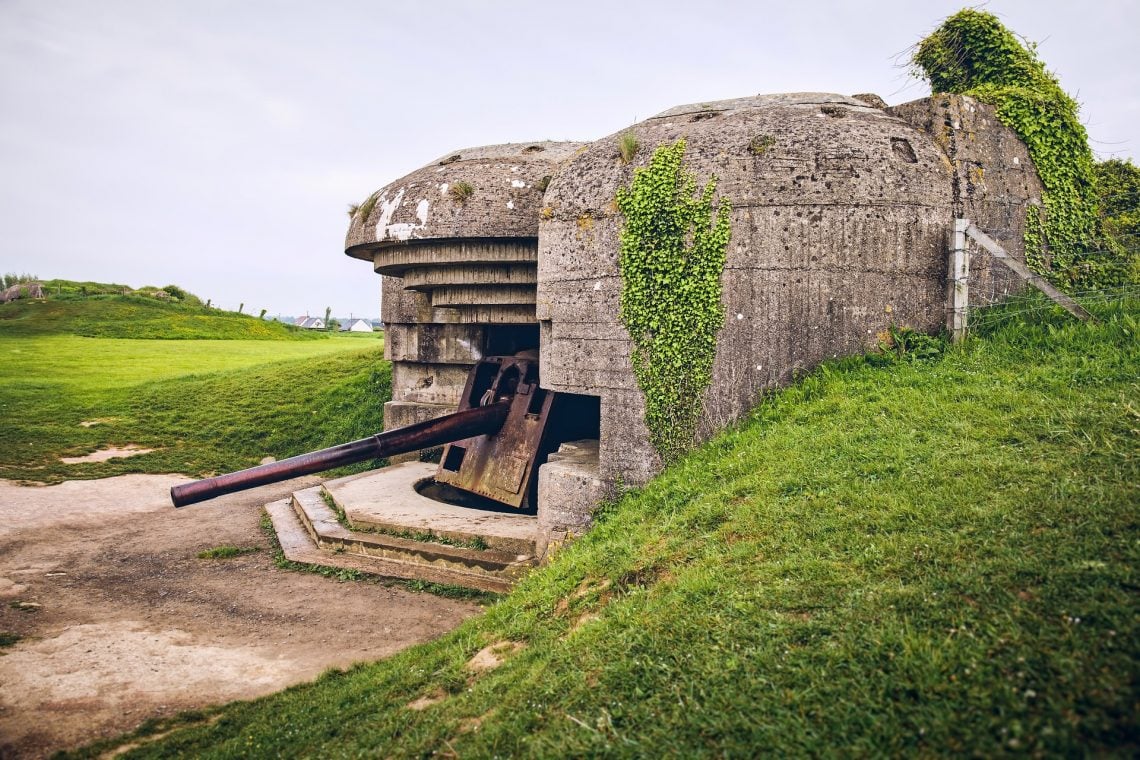 Further down the coast lies the German gun battery at Longues-sur-Mer. Perched on 60m high cliffs between Gold and Omaha beaches, the bunkers each held a 150mm gun, the originals of which remain in the battery to this day.

The area around is still peppered with bomb-holes and craters, while the bunkers themselves give an impression of the scale of firepower enlisted during the initial bombardments and defensive efforts to both take and hold the beaches.

Peer into the bunkers and imagine the view as the Allied forces advanced into the Seine Bay, after all the battery was located directly opposite the fleet as it approached the coast. On D-Day, the battery was silenced by naval fire before being captured the next day, a crucial battle to win in the struggle for the coast. 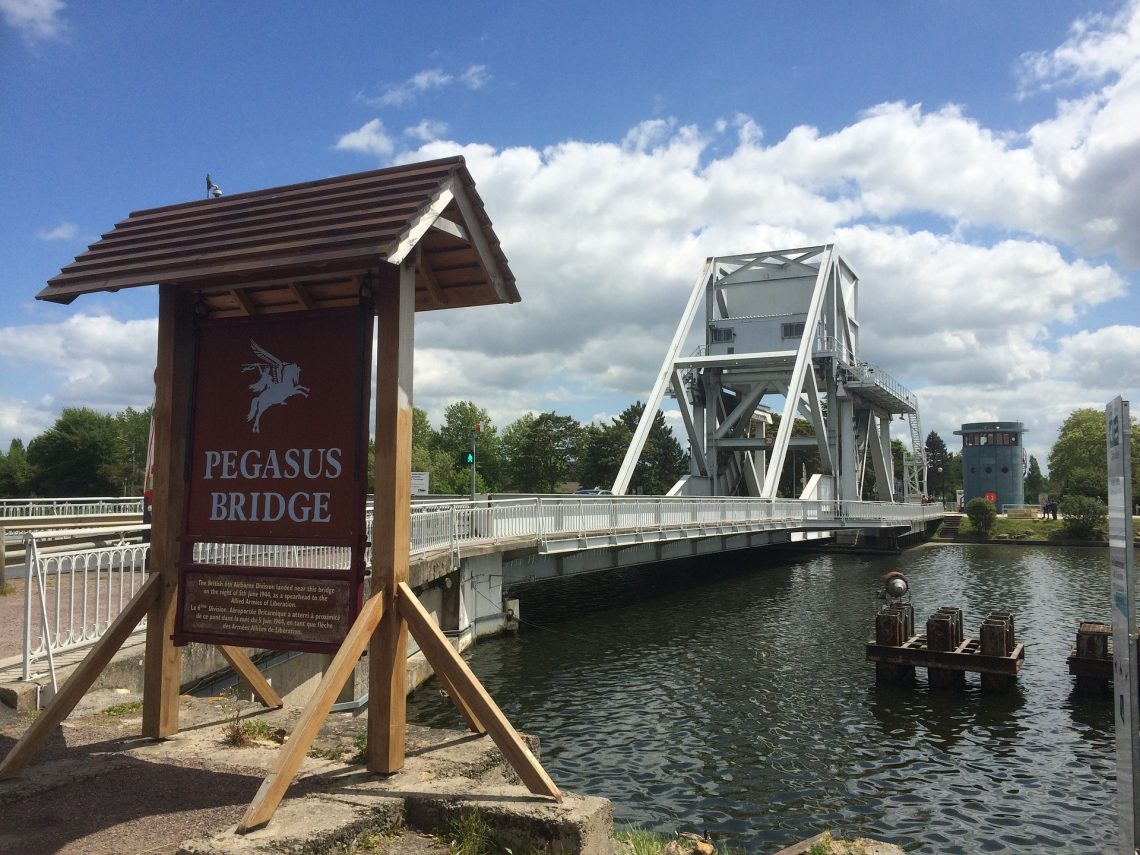 Slightly back from the coast on the way to Caens lies Bénouville Bridge, renamed Pegasus Bridge, the first objective taken by airborne troops during the Normandy campaign.

Ahead of the beach landings, tens of thousands of paratroopers were dropped across Normandy, tasked with disrupting the forces behind the Atlantic Wall and aiding in the eventual beach assault.

A key bridge over the Caen Canal, the bridge has since been replaced and now memorialises the efforts of those first boots on the ground on D-Day, while the nearby Pegasus Memorial Museum tells the stories of the 6th Airborne Division and gives visitors and insight into the airborne operation that proved a vital part of the story of D-Day.

Visit all of these sites, located just a stone’s throw from the Cherbourg ferry terminal, on one of Brittany Ferries’ short tours of Normandy.