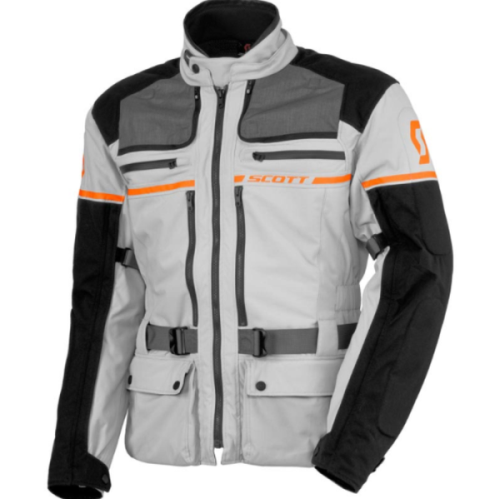 In the beginning the beauty of layering was in its flexibility; when it was warm and sunny the outer layer could be removed along with a thermal layer or two. This flexibility also applied to the quality of the individual layers; if a better, more protective outer layer, or more insulating inner layer, could be found then you simply threw out the old and replaced with the new. In addition, if an individual layer wore out or was damaged then you could replace just that one layer and not the whole garment.

Fast forward to modern motorcycle jackets and the manufacturers’ obsession with the ‘all-in-one’ three-piece jacket, which typically presents itself as a protective outer jacket, a detachable thermal layer, and a zipped-in waterproof layer sandwiched between the two. As any goat-skin wearing caveman would know, this design is flawed, and here’s why:

It makes absolutely no practical sense to have a waterproof layer as a ‘middle’ layer.

There is no flexibility in the system for implementing a more efficient layer depending on the conditions.

If one part of the jacket wears out then it all wears out.

This all-in-one approach was also seen as the next big thing in the outdoors market about 20 or so years ago but was quickly shelved when climbers, hikers and other outdoor activists pointed out the above disadvantages, plus the fact that the design made the garments heavier, bulkier, more complicated and more prone to zip failure.  The industry soon went back to its flexible layering system roots and concentrated on making the individual components better and more effective.

So why has the motorcycle industry continued with this flawed and inefficient design? It’s probably down to a combination of marketing departments getting their way; the consumer media either turning a blind eye to the obvious or not having enough expertise to comment in any meaningful way, and a lack of knowledge, plus a little apathy, by the paying public.

The manufacturers will point out that it is very expensive to have a waterproof membrane bonded to the outer layer and far cheaper to incorporate a separate drop liner into a jacket. My point here is that it is also less expensive to use a bin liner stuffed with old newspaper and at least the bin liner will be waterproof.

There’s no doubt that bonding a waterproof membrane to the outer is a more costly manufacturing process and when you include the use of expensive, branded materials such as Gore-Tex then there’s no getting away from the high costs. However, Gore-Tex is not the only product available. There are other proprietary brands of waterproof membranes which are just as effective and far less expensive. You only need to take a look at the outdoor brands to see this in action with companies such as Berghaus, The North Face et al using own-brand membranes to produce excellent products at half the cost of their garments featuring Gore-Tex.

Fortunately, there does now appear to be a growing discord amongst buyers, along with an increase in knowledge, which is translating into stand-alone waterproof outer jackets being seen as the most practical option and questions being asked such as ‘why is my all-in-one waterproof jacket not waterproof?’ The answer to that one is simple; it was never going to be waterproof with the water-resistant layer on the inside. Doh!

So, what is the perfect motorcycle jacket? In my view it looks something like this: a stand-alone protective and waterproof outer. Period.

All and any insulation is then provided by buying and wearing separate and dedicated layers. For example, a RAB (or Berghaus, or The North Face, or Mountain Equipment) insulated jacket is far more efficient than any zipped-in insulated layer I’ve come across in an all-in-one motorcycle jacket. And the same can be said for any fleece product or just about any insulating garment you’ll find in an outdoor shop. They are simply more efficient and effective than the components found in all-in-one motorcycle jackets.

It’s up to the industry, media and paying customers to get this right. From the supply side, companies such as Klim are leading the charge in stand-alone waterproof outers. Adventure Bike Rider is just pointing out the obvious, and from where I’m sitting, it’s looking as if the paying customer is starting to vote with his wallet, too.

You might also want to check out this feature: WTF is Gore-Tex?

And you might also find this feature on breathability of interest.