Helite: The airbag protection that could save your life 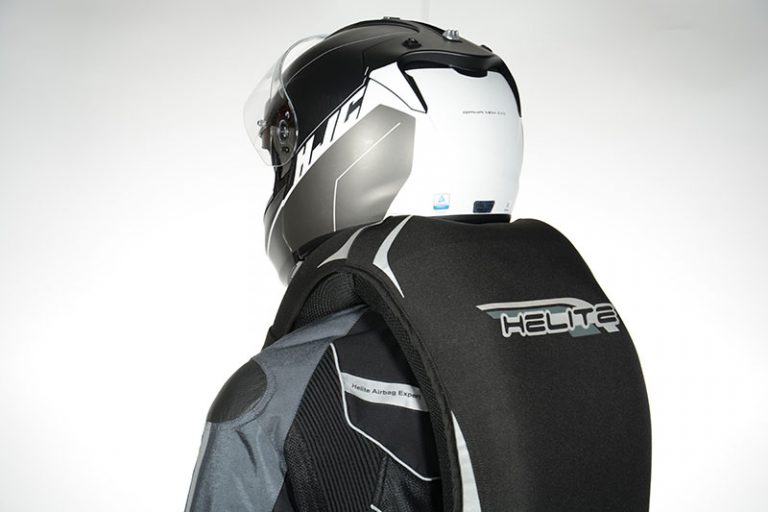 It all happens so fast. Suddenly the car that you’d spotted waiting to pull out of a side road is moving forwards. Then it’s there in front of you, and there’s no time to stop.

Then you’re on the floor. Adrenaline courses through your veins and thoughts fill your head: ‘Is my bike OK… What were they thinking?!’

Quickly that first shot of adrenaline begins to wear off and you start to feel the pain. And that’s when you notice the hissing.

Wait a minute, the hissing?!

With the emergence of airbag technology, a lucky few (relatively speaking, of course) have experienced the rapid inflation of a protective vest first-hand, and the trademark hiss as it lets out a small amount of air after initially triggering.

Leading the way with this new piece of protective equipment is Helite. The French company was the first manufacturer of wearable-airbags in Europe and still sets the pace in a rapidly growing market.

The premise is simple. A rapidly-inflating protective vest that can be worn standalone, or built in to a jacket that is tethered to the frame of your bike. In a collision as you come off the tether is pulled with enough force to trigger the motorcycle airbag, which inflates in less than a tenth of a second.

Forming an inflatable ‘Turtle shell’ around your torso, the vest protects your back, sides and front from impact. The high shoulder and back pieces reduce helmet movement to a minimum, protecting your head and neck from rag-dolling. 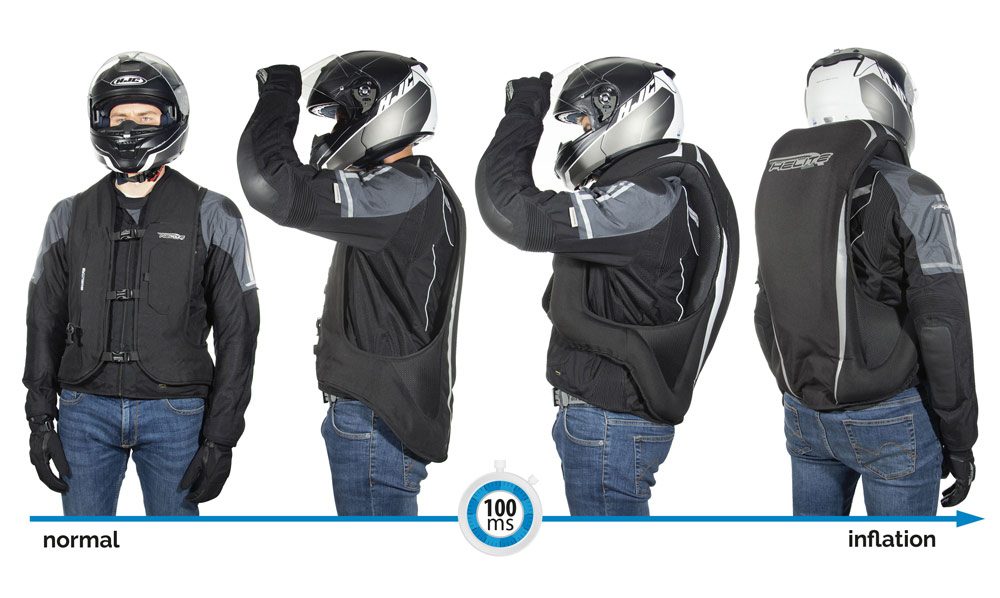 Sounds great on paper. And the staged ‘crashes’ to demonstrate it in practice almost convinced me. But I wanted to know what a Helite was like in practice. Not wanting to put my own body, or bike, on the line for a review, I heard from a couple of riders who had an off while wearing one.

Helite has quickly become a trusted supplier of 16 British police forces and the London Ambulance Motorcycle Paramedics. Their riders are expected to be extremely proficient on big bikes at high speeds, so full protection is an absolute must.

And it was while assessing a student for an initial advanced motorcycle course that Sam Clifford of the South Yorkshire Police found his Helite called into action.

“Our Turtle airvest is supplied through work, and I will admit to being a little bit sceptical… I guess I never thought it would happen to me.” Sam Said.

But then the familiar happened while travelling along a national speed limit road: “A car pulled out on me… I took avoiding action but ended up on the grass verge to the nearside. Bike dug in and flipped. All I can remember is riding onto the grass, then being face down in nettles.”

Despite quickly applying the brakes, Sam reckons he came off at around 40-50mph: “[my] student came running to me, in his words ‘expecting [me] to be dead’, and asks what that hissing is.”

‘That hissing’ was the Airbag that Sam had thrown on as he’d got ready that morning. An ambulance arrived and all his gear, including the still-inflated airbag, was cut off as a neck brace, back board and a healthy dose of morphine made an appearance.

Sam describes the doctor as “a little baffled” once the standard CT scans and checks had been carried out. Despite a rough crash at high speed, he was able to walk away from hospital that day with bumps and bruises, and not much else. A rarity for most motorcycle accidents at 50mph.

So what enabled this miraculous escape from harm?

“Airvest. Without a doubt. [I’ve gone] from someone once quite sceptical, to being a complete convert.” 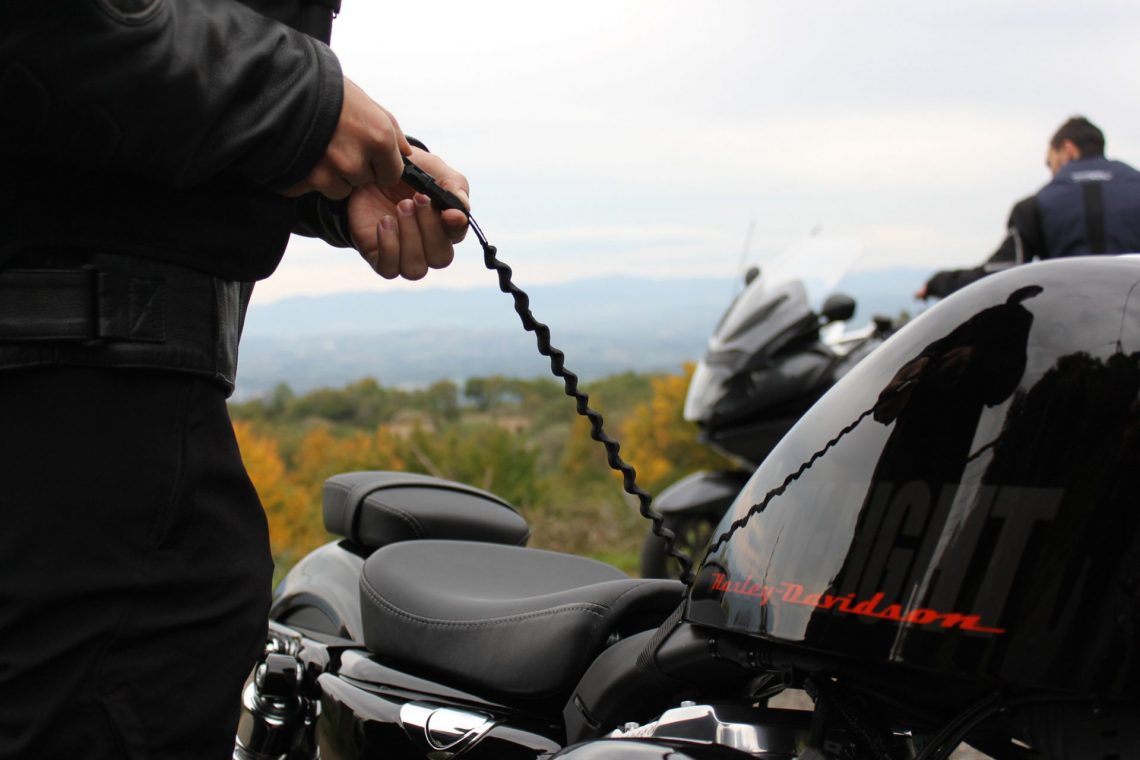 We’re not just at risk of an off at home though. It can be very common for riders on tour to have an accident. Long days in the saddle for a week or even two with few breaks, unfamiliar roads and hot temperatures in the summer can all combine to bring about a swift end to your trip.

David was unlucky enough to have an off in France while on a group tour during the summer months. While carving through long, fast sweeping bends he misjudged the profile of one and found himself hitting a grass verge on his BMW R1200RS.

“The next thing I know it’s all ‘Can you wiggle your fingers and toes for me?’ through the fog, about 5 minutes later.”

David’s bike was written off and his helmet wasn’t in much of a better state. The impact had sent him over the handlebars “landing on my head/left shoulder on the road before sliding to a standstill on my face.”

Once again the attending paramedics were pleasantly surprised. The vest had proved its worth and David walked away with just a fractured collar bone.

“[The paramedic] thought it had probably saved me from serious injury and I was very lucky.” The high shoulder and back pieces of the inflated vest had “kept my neck and spine locked rigid as I hit the deck” despite landing headfirst on the tarmac.

Unlike his helmet and bike, the Airbag vest lived to fight another day, although David replaced the scuffed outer covering. And he was sure that one piece of kit had kept him from serious harm.

“I will forever be grateful that I was wearing my Helite vest, and that it did its thing so effectively.”

As riders of motorcycles we know that there are inherent risks involved with our hobby. Ultimately, how we choose to deal with these is up to us.

But a chance encounter in October with John and Will, a father and son riding in the Picos together, left me with a thought in my mind.

With Will entering the world of motorcycling, his mother had bought him a Helite vest. Another for her husband quickly followed and, despite having not needed it, both were adamant they would never ride without one.

Motorcycle protection has long been a case of evolution rather than revolution. Better standards of armour, new helmet technologies, abrasion resistant fibres. All making small steps forward, until now.

Are we moving towards a future where an airbag vest is seen to be as important as a helmet and a pair of gloves when you sit behind those handlebars? I think we just might be.

If you’re interested in picking up a Helite vest take a look at their full motorcycle range here or read more testimonials on their Facebook page. With options to pick up a vest on its own or incorporated within a range of jackets suitable for touring, summer and winter there’s plenty of choice to keep you safe when riding.