Ride this perfect motorcycle route through the Yorkshire Dales 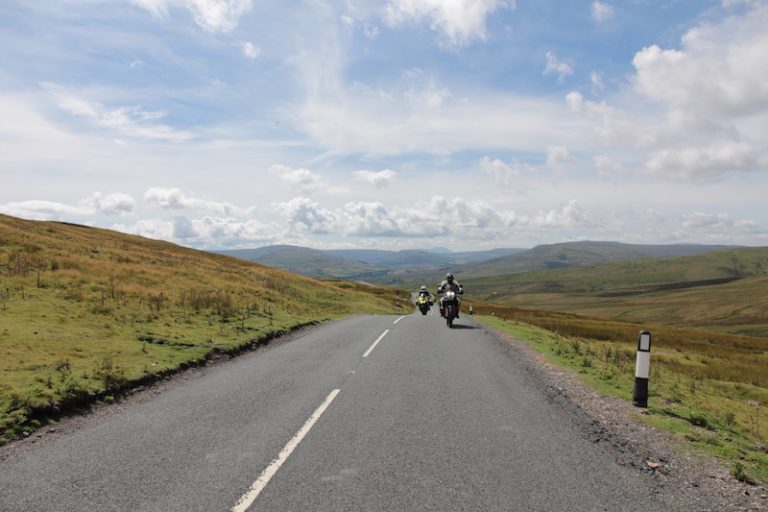 On one of our Discovery Routes with TomTom, Bryn Davies heads into the Yorkshire Dales to discover that it’s one of England’s most beautiful and incredible riding locations…

Throughout the year, we’ve brought you a series of features based around the concept of discovering what’s great about the UK. We’ve traversed the haunting Dartmoor National Park, learnt about the World War Two history of Warwickshire and now, for this issue, we head to the Yorkshire Dales to ride one of the most scenically stunning routes I’ve had the pleasure of compiling.

I went into this ride almost blind. I’d done my research about what I wanted to see, visit and ride in the Yorkshire Dales, but I looked at as few images as possible while I was doing it. I wanted to be surprised by the route, and man did it surprise me in the best way possible.

The scenery that this 182-mile long route takes you through is quite simply spectacular. There are moments where you feel like you’re the only person around for as far as the eye can see, and I often found myself mentally comparing the vast, open moorland with the impressive prairies in Colorado. 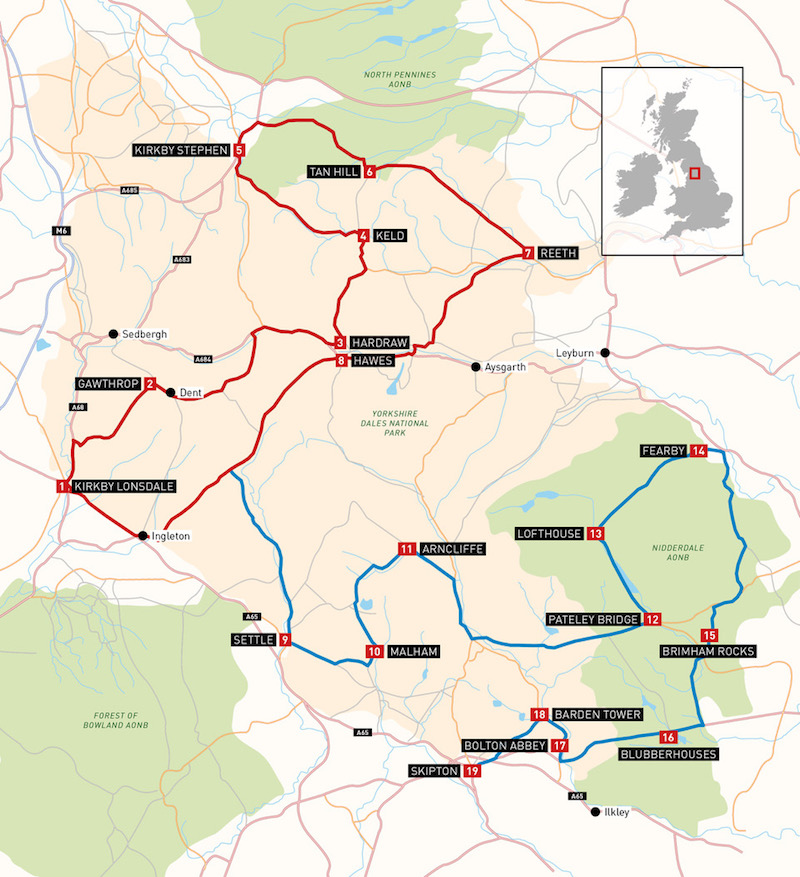 It’s not just the views that are worth travelling for, either. We headed up to the Yorkshire Dales on what was one of the busiest weekends of the summer. The sun was shining and the M6 was chocca with people trying to get away for a few days.

Despite a bit of traffic around Kirkby Lonsdale, I was amazed at just how empty the place was. On Buttertubs Pass, which is surely one of the best mountain roads in England, I could have counted the number of other vehicles that I saw on one hand.

Here we’ve proposed two routes for you to head off and ride. Route one will be doable in a single day, while route two, which is effectively an extension of the first, will be best tackled over two days as it’s 189 miles long. Done this way, you’ll have plenty of time to explore the various attractions that line the way, and also be able to make the most of one of the UK’s most beautiful national parks.

Our ride begins at a popular meeting point for bikers on the outskirts of the Yorkshire Dales. Devil’s Bridge can be found just outside Kirkby Lonsdale, and on Saturdays and Sundays parking is for bikes only, and riders turn up by the dozen to chat before heading off into the dales for a day of great riding.

If the chance to natter with other two-wheeled enthusiasts isn’t enough, then perhaps the promise of breakfast from the on-site van that sells sausage and bacon butties will get you going! 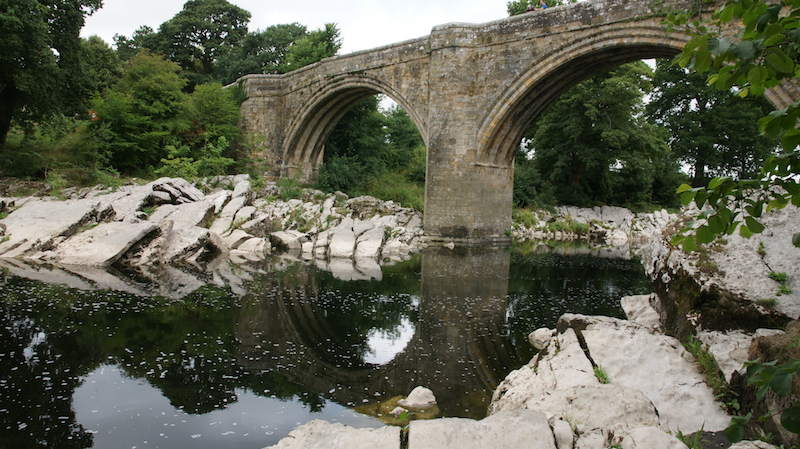 Jeremy Clarkson once said that Buttertubs Pass is the “only truly spectacular road in the United Kingdom”, and while I’ll have to disagree with that statement (I can think of over 10 spectacular UK roads right off the bat), I couldn’t agree more with the sentiment.

As our route takes you through the slower-moving B roads of the Dales, we pass Hardraw before taking a left and following Cliff Gate Road, which forms Buttertubs Pass. With a mile or so, the road rises abruptly, and you are afforded incredible views behind you (there’s a layby you can pull over in if you want to soak it up).

On cresting the pass, you’ll see the ribbon of tarmac before you, writhing its way down a valley wall to the small village of Thwaite. After riding this, you’ll want to turn around and do it again, and again. During our trip, despite it being a prime weekend in summer, we passed one other bike on this road, so go and enjoy it! 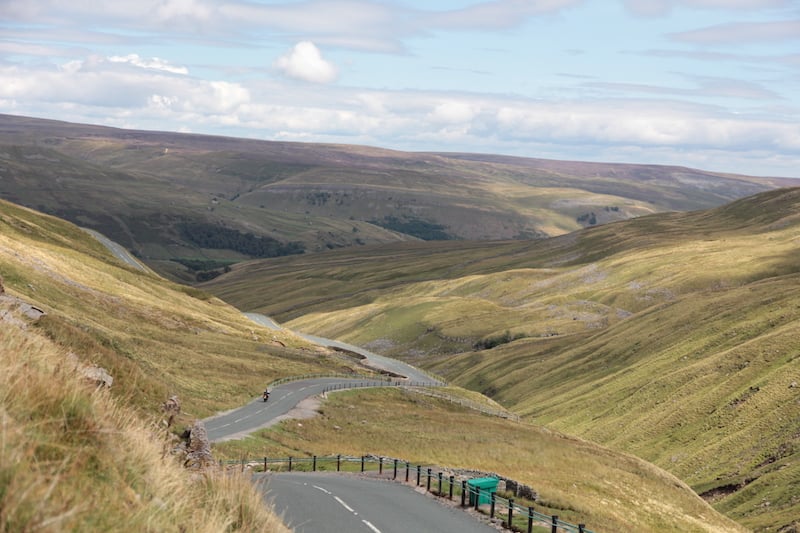 Riding up to the Tan Hill Inn, you could be forgiven for thinking that you’d just been transported to the great plains of the US. Stretching out as far as the eye can see is desolate, uninhabited moorland, and a type of sprawling openness that you wouldn’t think was possible in a country that’s often claimed to be ‘overcrowded’.

The only other sign of human activity is the A66 carrying traffic in the far distance. The ride up here is incredible, and you can savour it all with a bite to eat at the Tan Hill Inn, which also happens to be the highest pub in Britain. The Tan Hill Burger is a delight, though you’ll have to be pretty hungry to finish it.

Interested in a route that takes in the highest pub in Wales, Scotland and England? Check out our three pubs challenge by clicking here! 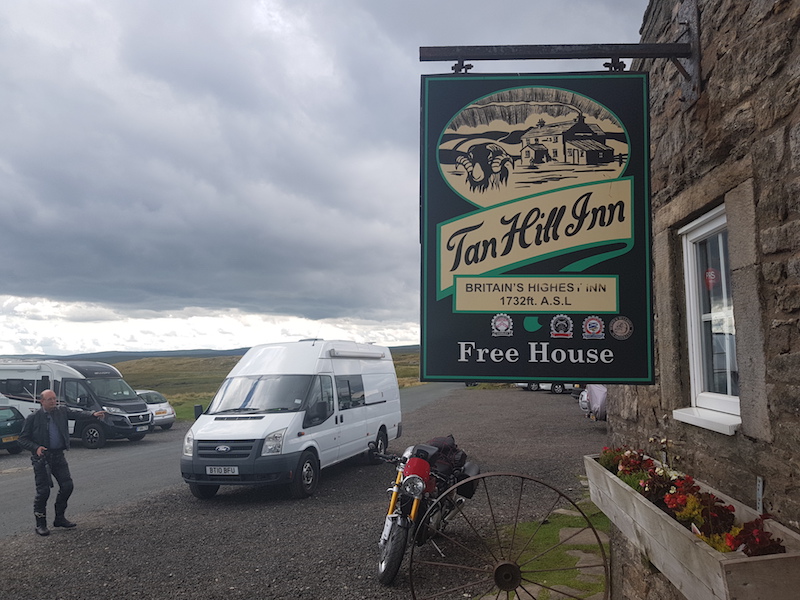 By the time you get to Hawes you’ll be wanting to take a little break, and a wonder around the Wensleydale Creamery is a great way to recharge. This is the home of the world-famous Wensleydale Cheese, and on the Yorkshire Wensleydale Cheese Experience you can get a fascinating insight into how the cheese is produced.

If that doesn’t take your fancy, the gift shop serves up some of the best ice cream I’ve tried. 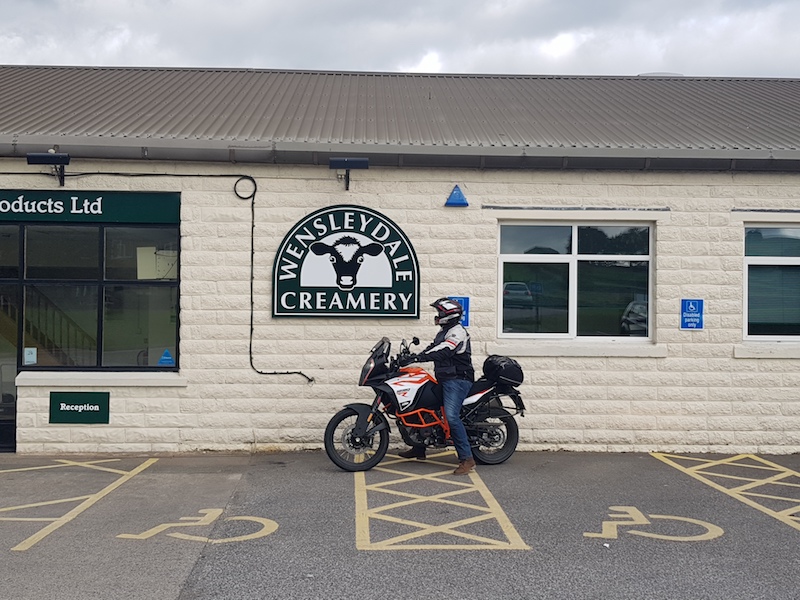 Immediately after leaving Hawes, hopefully with your panniers full of cheese, you’ll head down the B6255, and pass a sign that’s a morbid indicator of the riding quality of a road.

For roughly 12 miles, we follow the B6255 south and its excellent mix of sweeping corners, ups and downs and incredible views will have you totally immersed in the riding experience. As far as roads go in the UK, this short stretch has to be up there with the most enjoyable, and like most of the places in the Yorkshire Dales, I was surprised by how empty it was on what should have been a busy weekend.

The temptation here is to twist the throttle and gun it, but please ride sensibly, that sign at the start of the road is there for a reason, and while there aren’t any speed cameras, I was told by a local that unmarked police often patrol the route. 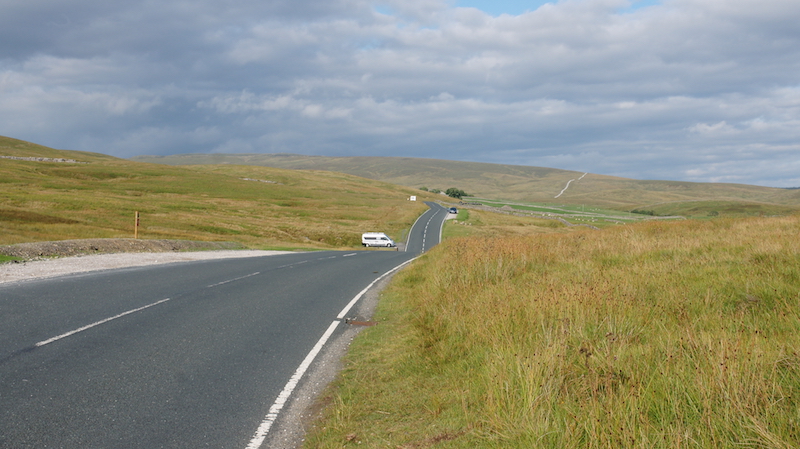 Riding the B6255 is enough to keep anyone happy but throw in a brilliant view of Ribblehead Viaduct as well and you have a stunning finish to this road.

The B6255 actually carries on south to Ingleton, but we take a left opposite the Ribblehead Viaduct with the town of Settle in our sights. A long layby lies on the side of the road just before this turning, affording a stunning view of the mammoth railway bridge, and it’s worth a stop if only for a few seconds to soak in the beauty (you can grab a burger from the food van as well if you’re hungry).

The viaduct was constructed between the years of 1870 and 1875 and it carries the Settle-Carlisle Railway. Running for 400m with a height of 32m, the structure casts a beautiful silhouette against the bleak mountains behind it.

But such beauty and impressiveness did not come without a cost, and during the construction of Ribblehead Viaduct over 100 men died, and the railway paid for an expansion of the local graveyard. As luck would have it, as soon as I pulled into the station, a train crossed the viaduct completing the look. 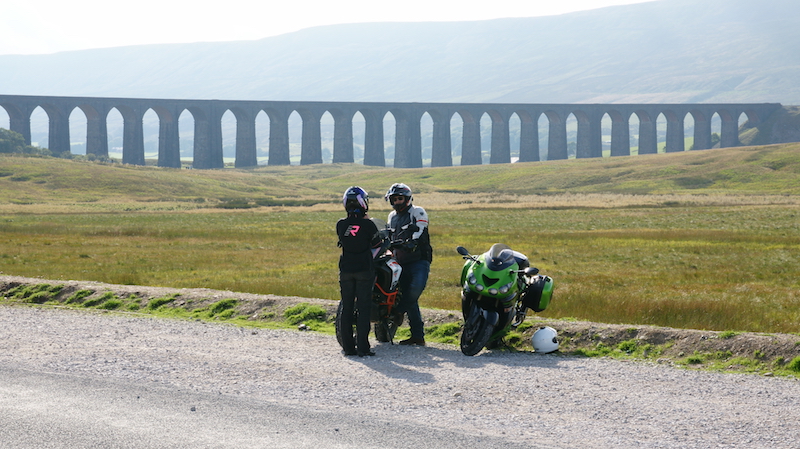 OK, we cheated a bit and our ride around the Yorkshire Dales leaves them for a bit to enter the Nidderdale Area of Outstanding Natural Beauty, but we just couldn’t miss it out. If freaky nature is your thing, you’ll love Brimham Rocks, and if it’s not, then you’ll still enjoy the chance to see some of the most remarkable balancing rocks in the UK.

Park up in the car park and take the short walk into the National Trust owned area where you’ll see a collection of wonderful rock formations that have been sculpted by glaciers, wind, and water over the course of millions of years.

Brimham Rocks was in the news a few years ago, although sadly for the wrong reasons. In June of 2018, some not-so-smart people thought it’d be fun to topple one of the 320-million year old balancing stones, smashing it to pieces. 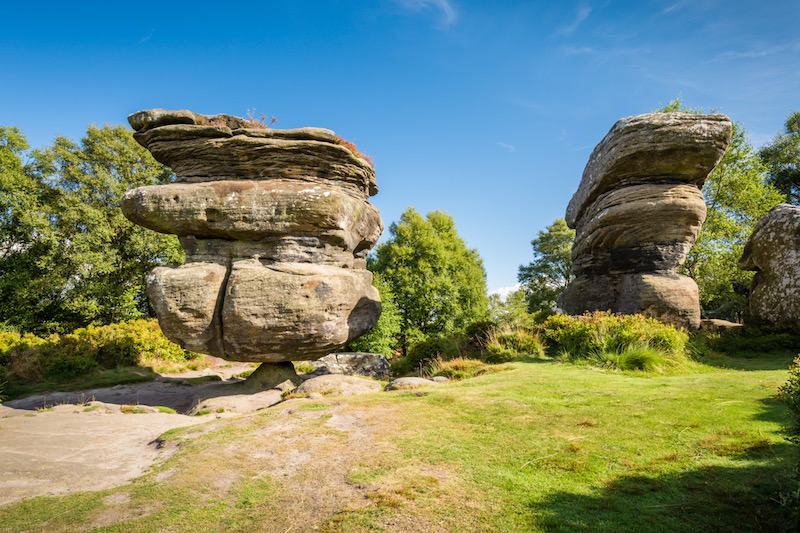 Nearing the end of our route we ride past the ruins of Bolton Abbey, an Augustinian monastery which was built in the 12th century. The abbey is a wonderful attraction in itself, but just a short walk along the River Wharfe will have you standing next to what is reputed to be Britain’s most dangerous stretch of water, the Bolton Strid.

Here, a seemingly docile section of the River Wharfe is said to have a 100% fatality rate for those who fall into its waters. The reason being, the Strid is deep, no one knows for certain how deep, and as the River Wharfe narrows to fit through the small rock gully, the force of the water has carved out many underwater nooks and crannies.

Couple that with the ferocious underwater currents and you’ve got a stream you don’t want to fall into. The 100% fatality rate might be a bit over-exaggerated, but the mysterious beauty of the Strid is worth the visit. 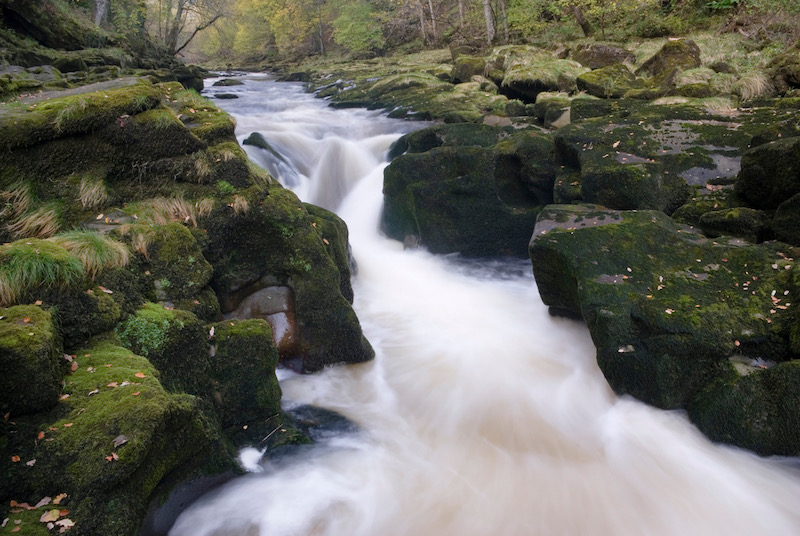 While green lanes are closing all throughout the country, the Yorkshire Dales is home to a good selection of trails for all levels of riders. We’ve featured quite a few in previous issues of the magazine (check out our FREE Guide to Greenlaning in Britain here), and if you fancy adding a few off-road sections into your ride of discovery it’s worth picking up and OS map and plotting some in. You’ll want to grab OL2, OL19, and OL30 to cover the whole national park. 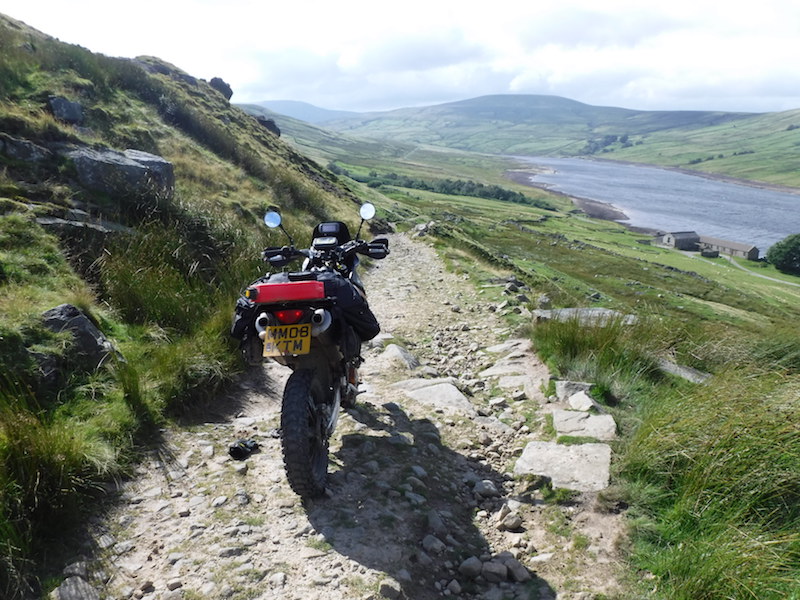 Plug the following waypoints into your SatNav to follow the ABR and TomTom Yorkshire Dales Discovery Route. You’ve got the option of a shorter day ride, or a two-day route where it’d be best to overnight in Hawes or Settle.

Head to the ABR Forum and enter the thread ‘Yorkshire Dales Discovery Route’ to download the gpx file for this route .

Discover more incredible routes and attractions in the UK like the Yorkshire Dales, with the TomTom Rider 550 SatNav, which comes pre-loaded with enough incredible rides to keep you busy for a lifetime, along with a number of features that are designed to allow you to get the most out of your next trip.

Brand new for the TomTom Rider 550, is the ability to update the device via WiFi, and to have your smartphone messages read to you, and it’s compatible with Siri and Google Now, so you can control it with your voice.