An interview with Simon Gandolfi, the adventure biker who took up motorcycling aged 73 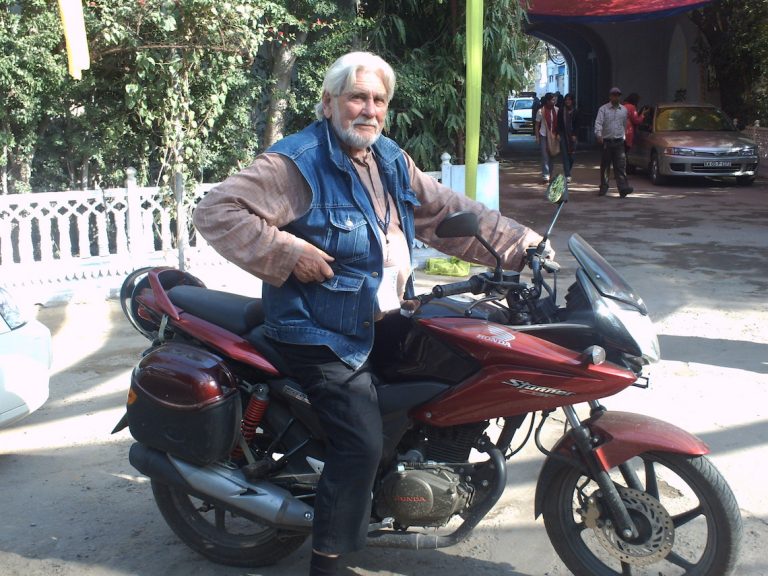 In 2006, aged 73, retired fiction writer Simon Gandolfi took up motorcycling, starting with an epic journey from Veracruz in the Gulf of Mexico to Ushuaia, Tierra del Fuego, the southernmost tip of America. Since then he’s completed several ambitious rides for even the most seasoned ABR, all of them aboard his trusty Honda 125. We caught up with him to find out what’s inspiring him…

Where did you get your love of travel?

I think after being a refugee during the war. I was sent as a small boy to South Africa, away from my parents. From there I went to a boarding school where there was a sadistic priest in charge of us. He beat kids until the blood ran down the backs of their legs – I just wanted to escape. I started to dream of travelling, and I suppose I’ve been escaping ever since.

You’ve had some weird and wonderful jobs over the years, from a crocodile hunter to a charter yacht skipper, do you have a favourite?

I think my best job ever was working for locust control in Somalia. We would track the locusts and then try to kill the eggs before they hatched. You have six weeks from when they lay the eggs until they can fly – if you fail, you know there’s going to be a famine somewhere.

So, when did you discover motorcycles?

I didn’t. When I retired from writing fiction, after about six months, my wife got bored of me being around the house and suggested I should do something I’d always wanted to do. “Well what is that?” I said. “Why don’t you ride a motorcycle the length of the Americas?” She replied. I’d never talked about it before, but I’d learnt not to argue!

Since that first trip where else have you been exploring?

Six months after I came back she said “Well you can’t just leave your motorcycle in South America, you should take it up to your daughter’s.” I have an adopted daughter who lives in upstate New York, so I rode it up to her. Then afterwards my wife suggested India, so I rode around India for six months. Then last year I finally made it as a serious biker; I was invited by a California scooter company to ride their new model. We tested it down through Baja California, Mexico, with the team from the factory. Can you imagine? Nearly 80, fat as a pig, and finally a test rider! On a shitty little bike actually… awful bike.

You’re possibly best known for that first trip you did through the Americas – why did you decide to do 16,000 miles on a Honda 125?

The first trip nobody would sponsor me, because everybody presumed I’d die. So firstly it was because it was the cheapest, and I realised that at my age I couldn’t lift a bigger bike back up if I fell off it. The 125 uses hardly any petrol… I carried a full coke bottle and that was enough, and it didn’t break down once. A small bike isn’t a sign of affluence either; a fat old fool rides up over a hill in Colombia and there are eight bandits there, the only reason they are going to stop me is to offer me a hot bowl of soup. If you turn up on something big with three steel safes, then you better have some money in one of them or they are going to be seriously pissed-off with you.

What was the reaction of your friends and family before you went on that trip?

My four sons thought “Oh Dad, just being irresponsible.” My wife was thinking, “Great!” And my daughter: “How dare you risk your life, you’re a grandfather!” But in all they were very supportive, particularly on the second trip because they actually thought I could manage it. When you get older it’s much more likely you’re going to snuff it, but now I can get sponsors – it’s utterly ridiculous!

How did you find yourself entering Colombia on a smugglers’ boat?

I was with this Chinese-American chap and we were looking for the cheapest possible way to get into Colombia. There was this little cargo boat, and they said they would take us. We just had no idea they were smugglers. They stopped by this little island and they unloaded everything in the middle of the night, including us. I remember standing in front of the head of immigration in Cartagena, as he looked at my passport he said, “You’re 73 – haven’t you learnt anything in your life. What did you think they were doing? It would have been a lot safer for them to have cut your throats!”

Contrary to the Hollywood representation of corruption and danger, you portray Central America in your book as a friendly, welcoming place; why do you think your experience turned out to be so pleasant?

I speak fluent South-American Spanish – that helps. And being old was a tremendous advantage – they like old people, they look after you. And courtesy, respecting people and respecting the laws.

What else did you learn?

I think probably it’s not so much other people it’s about what you do – I’ve learnt not to do the ‘Man Thing’, when men do things that they know are stupid but they are frightened people will think they are scared if they don’t do them. My rules are: Ride slow, ride safe. Don’t do the ‘Man Thing’. Now I do one ‘Man Thing’ on each trip – I try to be wise but you always goof it in the end!

You had quite a horrific crash on your first day riding from Ushuaia to New York; tell us what happened.

It was a ‘Man Thing’. It was bloody cold and there had been snow overnight; going over the hills there was sheet ice. But I thought, if I turn back what are people going to think of ‘The Great Adventurer’? So I came back in an ambulance. I was riding at about three miles per hour when a big truck came up behind me, he didn’t want to lose traction, so sounded his horn but I couldn’t get off the road. He whammed straight into me. I went underneath. It was my fault; I shouldn’t have been on the road.

How did that set the tone for the rest of the journey?

Well I didn’t do the ‘Man Thing’ again! The bike then had to be re-built by this guy in Buenos Aires. When I finally went in and asked for the bill he took me up to his office and closed the door like it was a secret meeting. I promised never to tell anybody how much it was – but it was less than the price of a screw on a BMW. Another good reason for a Honda!

Were there any other crazy moments?

People think it’s a great adventure, like you’ve done something special. Millions and millions of people ride a small bike to work every day, all I do is ride a bit further and I have a much, much, much better lunch. People shouldn’t be scared of doing this. If I hadn’t have spoken Spanish, though, it would have been a very different trip.

I have two gods of travel: James Bruce, a Scottish travel writer from the 18th century and the author of Travels to Discover the Source of the Nile. And Wilfred Thesiger, he was the first to cross the unknown quarter in Arabia. He was in locust control before I worked there, but I met him in Ethiopia later – an extraordinary man. Mad as a hatter.

If you could take anyone, dead or alive, for a pint, who would it be and why?

James Bruce every time. I doubt if it would be just one!

Is there anywhere you’d still like to explore by bike?

I would like to ride around Spain – my great grandfather was a Spanish General in the 1800s Wars of Succession, who practically marched around the whole of Spain evading the opposing armies. I would like to follow in his tracks from where he was born, and go all the way round the country. He did it on a horse of course, but I would like to do it on a motorcycle. I have thought, ‘what do you do when you get to 80 and your balance isn’t as good as it was?’ You don’t have to get a sidecar – how about a Morgan 3 Wheeler?! They’re fantastic.

Tell us a secret

I’m terrified of heights. I once followed some Sikkimese in their jeeps up an army trail on a mountain, to the 3,400m snow line. This track was like a riverbed. The whole way I was terrified, and I knew if I fell off I would go all the way down.

What’s your advice to riders who feel they’re ‘too old’ to make their dream trip?

You’re never too old to be a teenager. But if you’re so old you think your balance isn’t up to it, buy a Morgan 3 Wheeler.

To find out more about Simon and keep up to date with his adventures, see www.simongandolfi.com. His book, Old Man on a Bike, about his epic ride through America is also available to buy online, priced £12.50.