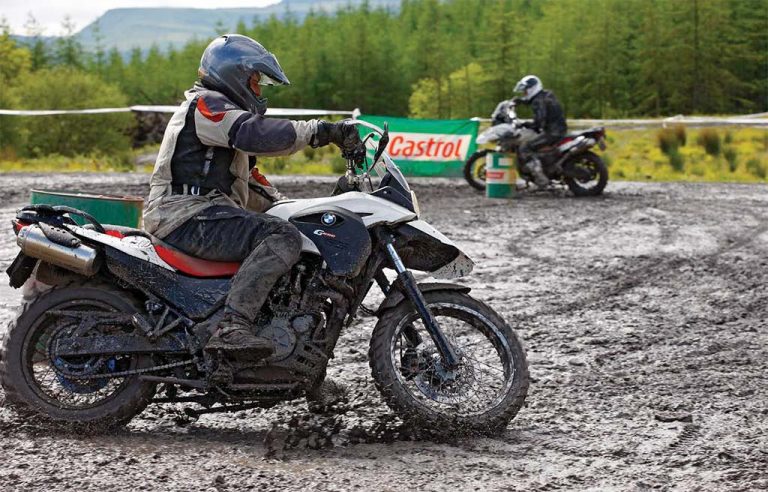 A weekend of fun for all kinds of bikes as long as you have a sense of adventure! The ABF Treasure Hunt Rally is a tactical rally that requires navigation and planning skills to help you locate various ‘treasures’ and bring them back to base. It’s basically a great excuse to ride through amazing scenery, camp with like-minded folk, have a BBQ and watch some adventurey films and guest speakers.

HOW? Tickets cost £50 for the weekend (per bike, including pillion) but £10 of that is donated to Wiltshire Air Ambulance. Visit www.trailandoff road.co.uk for more info.

■ WHAT? The GS Trophy

Think you’ve got what it takes when it comes to riding your GS? Why not put it to the test at the 2015 GS Trophy? Competitors will take part in a range of off -road skill challenges on the range of 2015 BMW adventure-sports bikes as well as tackle road-based sections on their own bikes. It’s all to play for as the three best riders will be taken on a once-in-a-lifetime adventure riding holiday.

HOW? To enter the GS Trophy you must own a BMW and while places are filling up fast you can visit http://booking.off roadskills.com/ events/2/10/27 to enter. Entry costs from £99.

With the weather getting nicer we’re also heading into rally season and first up is the annual ABR Ireland Rally. The event will take place at the Shepherds Rest near Draperstown and there’s a host of biker friendly facilities including washrooms, showers and, arguably most importantly, a bar! A rideout has been planned to show off the Sperrins Mountains and the surrounding areas.

WHEN ‘N’ WHERE? The ABR Ireland Rally will be held on the weekend of the 29th-31st May in Draperstown, Magherafelt, Ireland. Plug BT45 7BH into your SatNav to find the camping grounds.

HOW? Log on to the ABR forum (www. adventurebikerider.com/forum) and register your interest in attending in the ‘ABR Ireland Rally’ thread. Camping is £6pppn and will be collected on site by the host.

To kick off the 2015 season of motorcycling Adventure Bike Shop will be holding an open day event at their store in Acton, Suffolk. Head on over for a day of adventure motorcycling fun where you’ll find over 20 trade stands as well as 10 authors and guest speakers, including adventure motorcycling legend Ted Simon, who’ll be giving talks throughout the day. Get there a day early and camp at the White Horse Inn while enjoying a few bevvies.

WHEN ‘N’ WHERE? The season opener will be held at the Adventure Bike Shop on Sunday 31st May from 10am to 4pm! Stick CO10 0BB in your SatNav to head there.

HOW? Entry to the event is completely free, but The Adventure Bike Shop will be hoping to raise some money for the East Anglian Air Ambulance with donations on the day.

It’s that time of the year, folks, when you can watch brave men on bikes throw themselves around the roads of the Isle of Man at speeds that’ll make your knees go weak. The Isle of Man TT is one of the most prestigious motorcycle races in the world and it never fails to amaze, entertain and excite. This year it’ll be taking place between the 30th May and the 12th June so don’t miss out, whether you’re going to watch it on TV or head over to the Isle itself.

HOW? There are various ticketing options available on www.iomtt.com but get in quick as they tend to sell out.

■ WHAT? Warrington MCC Off the Rails Rally

A weekend of camping, boozing, eating and listening to live music all in the name of bikes. What’s not to like?

HOW? Visit www.warringtonmcc.co.uk for more information and to fill out a booking form, tickets are £12 in advance or £16 on arrival.