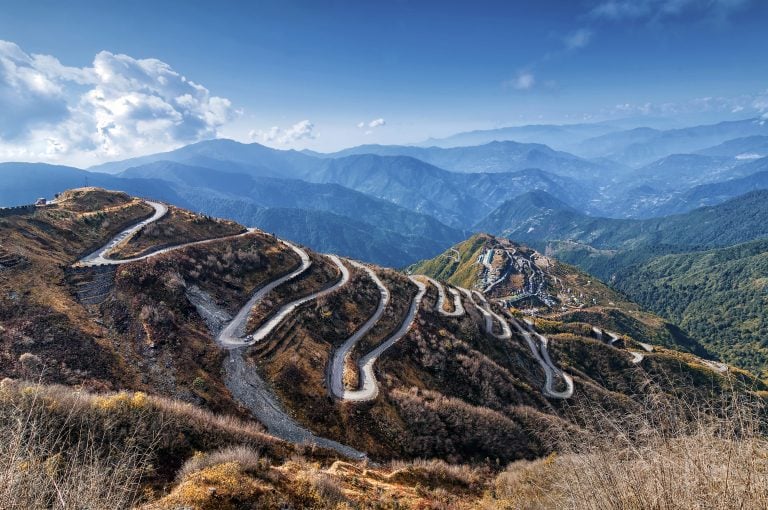 The Silk Route spreads for thousands of miles across continents, but there’s one section that will make you want to throw on your kit and ride, Alice Cook checks out the Buhl Buhlaiy

Travelling along the Zig-Zag road, or Bhul Bhulaiya as it is rightly called is no new thing. This stretch of mountain road is part of the Silk Route and caravans were going the distance as far back as 2,000 years ago. ­ e Silk Route is historically a very important network of trading routes connecting Asia, Europe & Africa and is often referred to as one of the most ‘unique engineering feats’ in the world.

The Silk Route is considered as the ‘first information super- highway’ and was used to transport silk (obviously) as well as tea and paper across three continents. ­ e stretch of road is synonymous with 13th-century traveller Marco Polo – the Silk Route’s most famous follower.

Bhul Bhulaiya is a branch of this intricate network that sits alongside East Sikkim at the lower of the Himalayas. It is still very much considered a ‘virgin destination’ for overlanders and has, so far, escaped the throng of visitors and amateur traveller’s that seem to have found their way to many other destinations in the world.

The Bhul Bhulaiya doesn’t just offer stunning scenery, the ride itself is one of unrivalled twists and turns. With a total of 32 hairpins, you are sure to get the experience from all angles. The ribbon-like, serpentine road starts from Lingthum and reaches the top of Zuluk at a breathtaking height of 10,100ft.

Despite its name, the Silk Road isn’t one road at all: it’s a spidering network of trails and lanes. With no directions or signposts, planning really is key. Roads that seem to wind off into nowhere and narrow, bumpy tracks mean the way can be treacherous at the best of times even with a well-planned route.

In terms of preparing for the climate, there is a real range of conditions to plan for. From cold to ‘pleasant-cold’, to monsoon season- where it’s absolutely beautiful. Oh, and cold. Plan for this; and plan for long stretches of rough routes and very little luxury along the way.