The Cedars of God 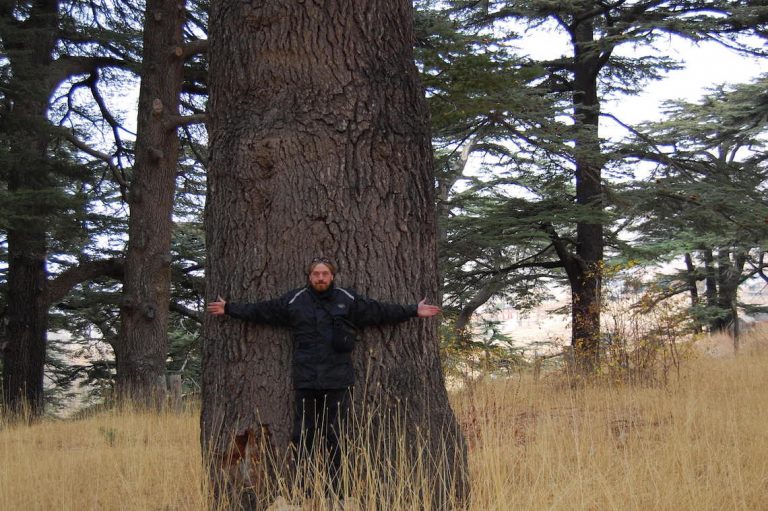 I poked at the neutral switch until the green light flickered on. The engine didn’t want to start at first, but it finally sputtered into life. After that it rose in pitch to a healthy idle. The exhaust came in metered bursts, making the leaves jump on a nearby bush. Smoke was visible in the cool air. As the bike warmed up, I looked it over.

I had flown the bike from Canada to Germany. From there I rode it through the Balkans, through Greece, Turkey and Syria. Now it was parked outside a dank hotel in Beirut, Lebanon, just opposite a building dating back to the French Man- date, all spackled with bullet holes from the civil war.

After all those miles, I hadn’t ridden the bike much lately. There are restrictions on motorcycles south of Beirut. Years ago, armed men on little scooters committed murder in Sidon and, over reacting as only Lebanese politicians can, they banned all motorcycles from the city and on the main highway going south. So I chained the bike to a fence outside the hotel and took day trips with public transport.

“I know I’ve been ignoring you,” I whispered, patting the gas tank, “and I’m sorry.” I strapped up my helmet, still talking softly to the machine. “You know. It’s just easier to take a taxi with all those motorcycle blockades.”

If The Oscillator resented the neglect, it didn’t show. Together we rode north, toward Tripoli. Nearing the city, I turned away from the coast and climbed into the hills toward a low bank of cloud. When I stopped at the edge of a town to check my map, an old man waved me over to join him for coffee on his porch. Bundled up against a chill in the mountain air, he wore a long woollen jacket and a black hat. We took turns leafing through my Arabic phrasebook in an effort to communicate, but that only frustrated us both. In the end we sat quietly, enjoying the cool air and hot coffee. 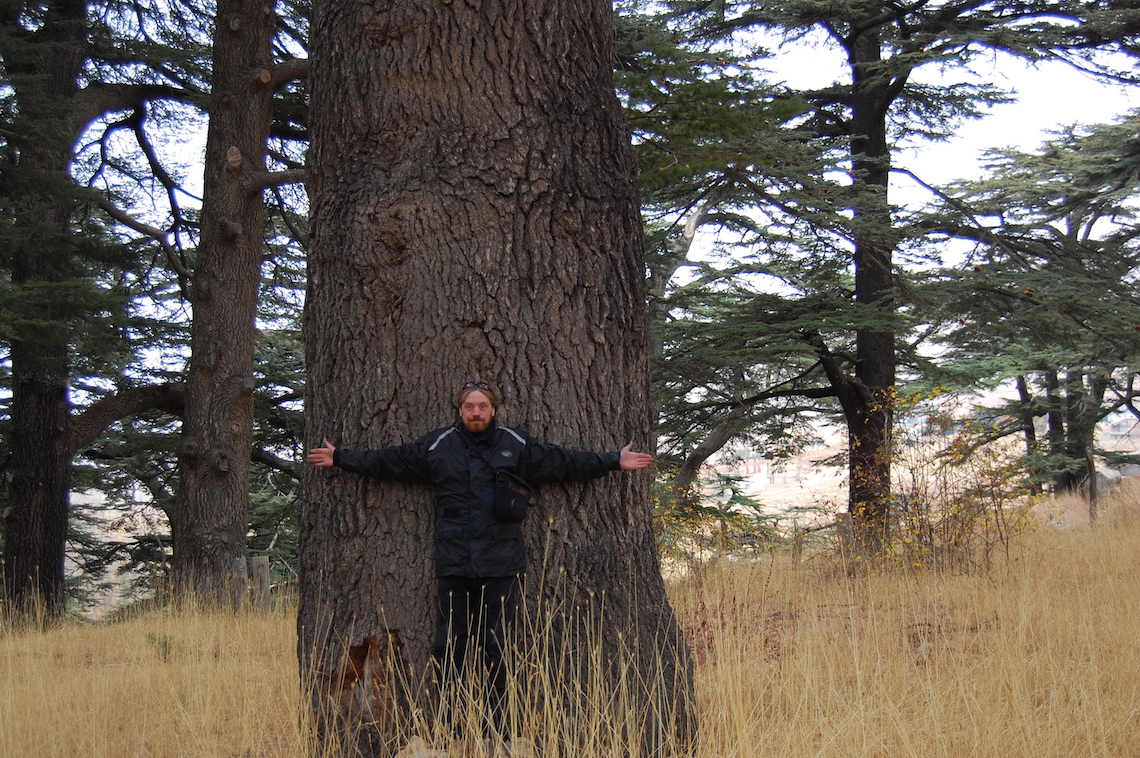 One side of the man’s porch nudged the road, while the other side opened onto a rocky yard. From there, the property fell away into the holy ground of the Qadisha Valley. The valley is home to several Christian monasteries and the town of Bcharre.

Crags in this valley often split open into caves, and these caves have for centuries attracted hermits aspiring to religious perfection. Whether any have attained it or not, who can say? But you have to admire their resolve.

Looking across the gap, I could see a village of white houses perched at the far edge of grey cliffs. Hearty green shrubs clung to the rock down low, while farther upslope the leaves had gone yellow. Higher still, a dusting of snow settled on grey mountaintops. Above that there was thick grey cloud.

Way down below, the Qadisha River ran through the valley. Its headwaters are in a grotto very near The Cedars of God. That was my destination, the last remaining grove of Lebanon’s ancient Cedars.

The road wound through villages with red roofs and Christian symbols, through Bcharre, past a domed church with two towers and farther up toward the Cedars. Parking the bike, I slid out of the saddle to stand on numb feet. I swung my arms to warm the blood in my fingers. As my joints had grown stiff from the cold, I took several testing steps before picking up the pace. Walking down, I passed through an opening in a stone fence and entered the forest. Technically it was closed for the season, but that only meant that I had the place all to myself. 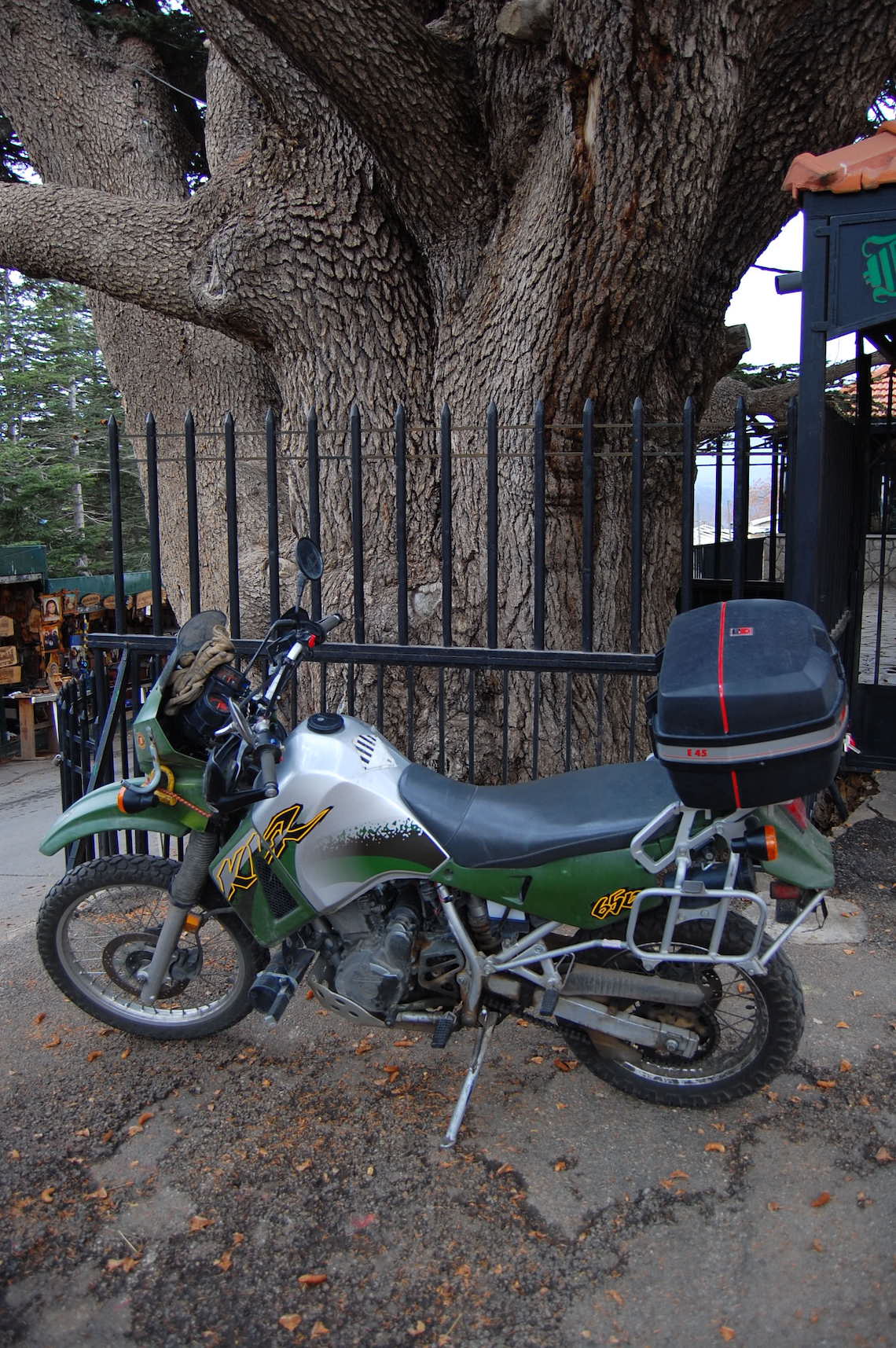 My footsteps made no sound: the path lay beneath a blanket of needles and seed cones that had fallen from the trees. Patches of snow gathered in shady hollows. The Cedars anchored to the earth with a wide base, their thick boughs stretched out like giants flexing for show.

A cold rain fell as I padded along. It washed the scent of cedar right out of the air. Water trickled off my head along ringlets of hair, pausing at the tips before dropping away in front of my eyes.

I looked around for signs of life. I listened. Nothing but the plunking of rain off my shoulders. I wished that I could share the moment with someone, that I had someone to talk to. A few times I even caught myself speaking out loud, talking to the trees – or maybe I was just talking to myself. Either way the trees remained silent.

The Cedars. Even with all the majesty that remains, they only hinted of a former glory. Once a wild forest, the Cedars are now confined to several National Parks. All the trees in this reserve were pruned, their limbs sawn off, their stumps painted to protect them from disease. The Almighty Cedars. Humans built walls around them. Men placed them in a box to define their boundaries. Men trimmed them and made them into something less wild.

Returning to the bike, I wiped the seat with the back of my glove to clear away the water. The map showed a track that crossed over the mountains before dropping down into the Beqaa Valley. I looked up into the hills. Heavy fog had settled over the peaks making it impossible to see. But looking at the map, that route appealed to me. 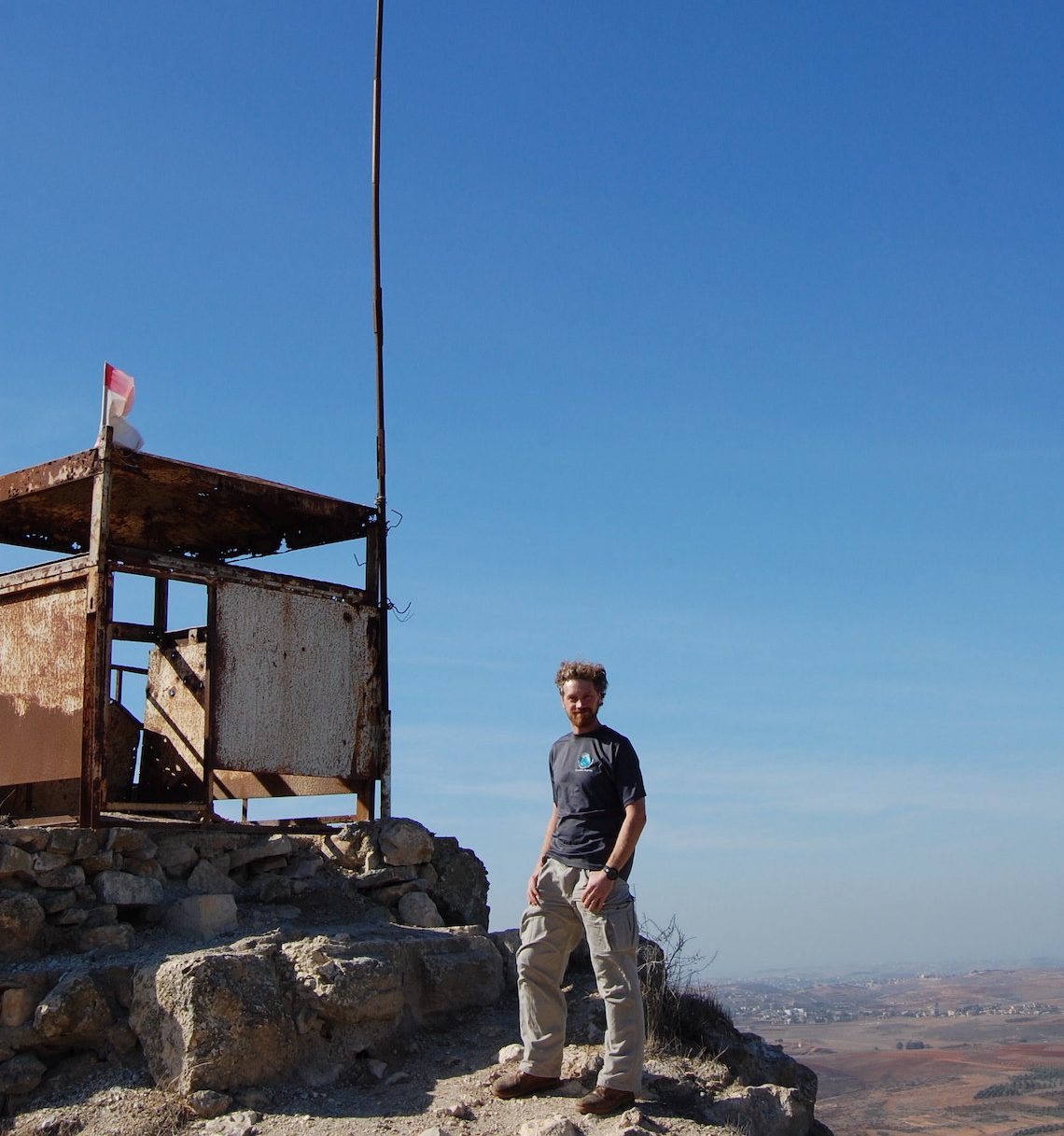 I idled up to the only tourist shop still open this late in the season. I asked the girl behind the counter about the path. Was it open? Is it a good road?

The girl was unaccustomed to fielding questions like this in English. She could really only talk about the price of her curios. But after searching for the words, she did manage to articulate a warning. “There is snow,” she said. “It’s too difficult for him.” She meant The Oscillator. “He’ll fall.”

I decided to ride up anyway and take a look for myself. I’ve ridden in the snow before and I was imagining the dry, powdery stuff I had seen lower in the valley.

With a wave to the girl, I rode into the fog. I’ll bet she could still hear my engine when heavy snow forced me to turn around. As the road pushed through the clouds it entered a landscape of slush. I pressed on though, thinking that I might be near the crest of the pass. But the sleet that stuck to my visor provided no traction for my tyres.

The Oscillator very nearly did fall. When I stopped in the middle of the road to warm my hands I couldn’t get moving again. The back tyre just spun and spun. Defeated, I executed a fifteen-point turnaround to retreat. Dragging both feet, I slipped back down the mountain until the sleet became cold rain once again. As I rode past the tourist shop I 40 ̊ looked for the girl. She was gone.

When I had left Beirut that morning, I brought along a small backpack with the intention of staying in a new town for the night; but now, too tired, too wet to bother finding a hostel, I settled in for a miserable ride in the dark and rain all the way back to Beirut. 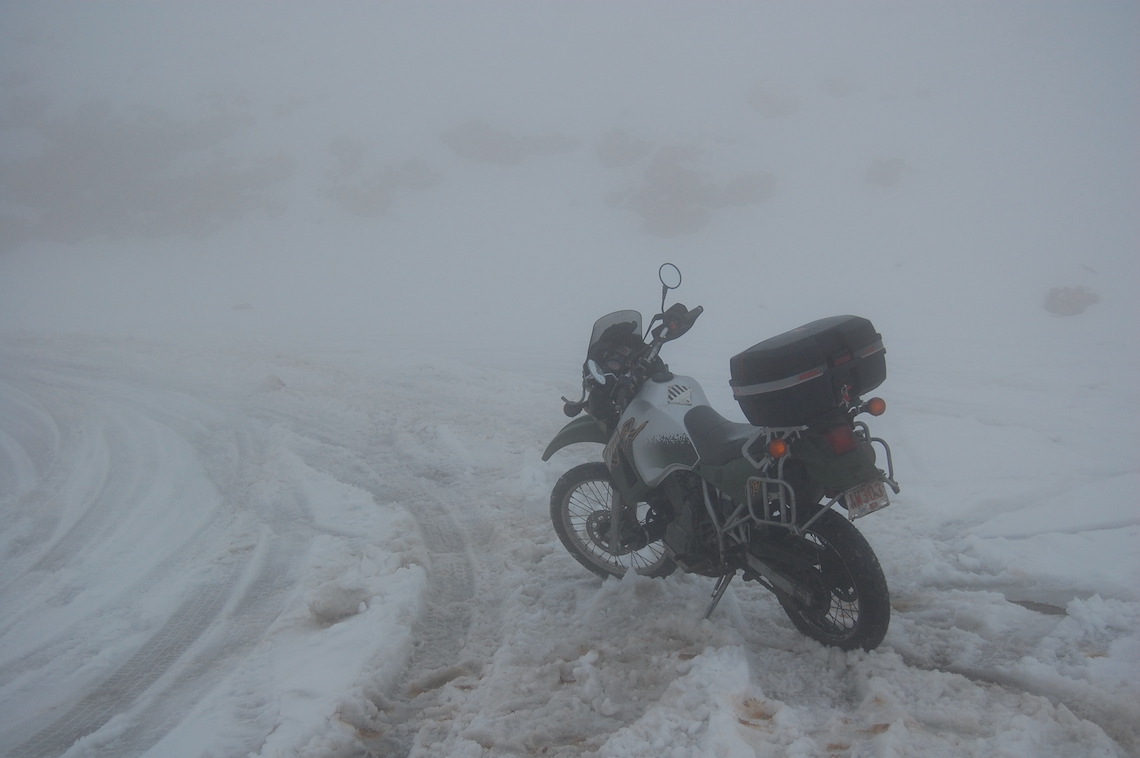 Jeremy’s in the process of compiling his latest motorcycle adventures in a new book, Through Dust and Darkness, which is due for 35 ̊ release by Rocky Mountain Books in paper-back and e-book format in autumn 2013. See www.amazon.co.uk for more

At the time of going to print, the Foreign and Commonwealth Office is currently advising against all travel to the city of Tripoli and Palestinian refugee camps and against all but essential travel to the Bekaa Valley, to within 5km of the Syrian border, to the southern city of Saida, and to areas south of the Litani River. See www.fco.gov.uk for more

Jeremy Kroeker is a Canadian journalist and motorcycle adventure rider. He’s the author of Motorcycle Therapy – A Canadian Adventure in Central America (www.motorcycle-therapy.com) and has written for various Canadian newspapers including the Toronto Star and Calgary Herald. He’s also penned articles for American magazines Alpinist and Outrider Journal.

Jeremy’s bike is a 2001 Kawasaki KLR 650. “It has a mysterious wobble in the front end, so I call it ‘The Oscillator’,” he says. “The odometer was showing 12,190 miles by the time I got to Beirut. Most of these I’d put on myself, but I suspect a former owner may have tampered with the dials and lied about the mileage when he sold it to me. Still, it had gotten me this far and I had grown to trust it.” Ahh, the bond of man and machine. 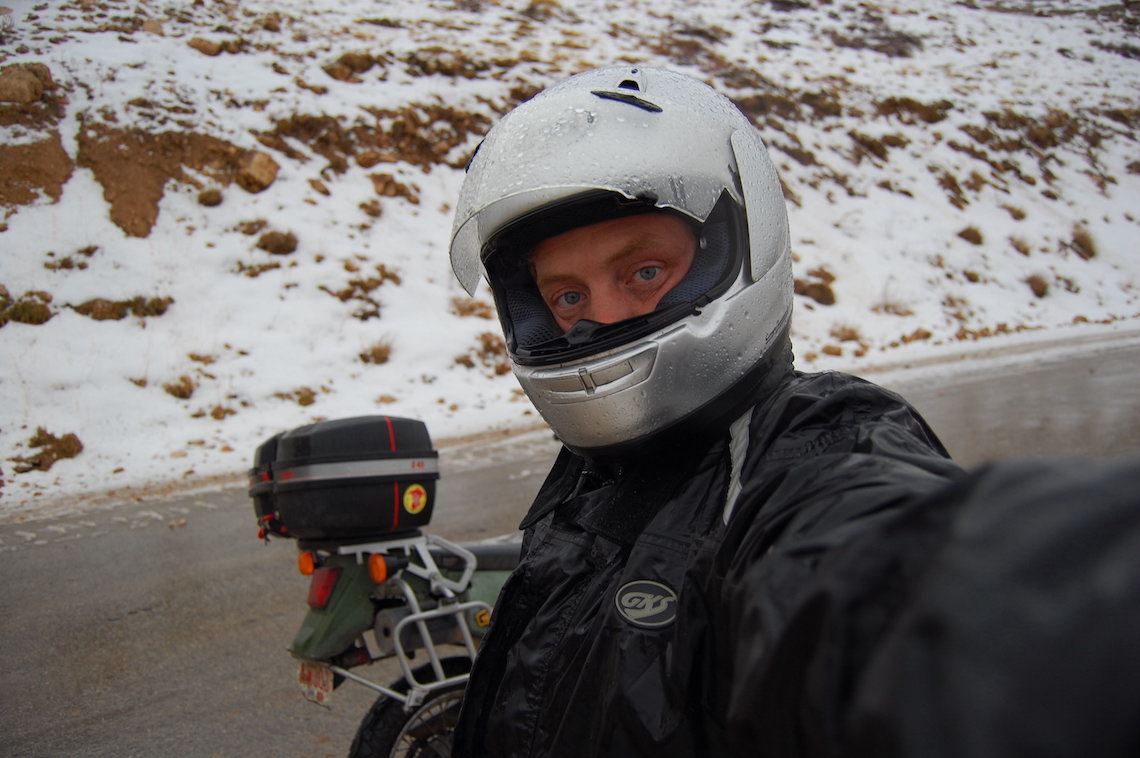 How long does it take? Jeremy made this trip to Lebanon from Canada as part of a much longer overlanding adventure via Germany, the Balkans, Greece, Turkey and Syria. At the time of going to print, however, the Foreign and Commonwealth Office is currently advising against all travel through Syria. For more, see www.fco.gov.uk. The 70-mile coastal route from Beirut to the Cedars is an ideal day’s ride out from the city or a two-day stopover if you want more time to explore this beautiful area of the country.

When to go? Lebanon has a Mediterranean climate with warm, mild summers and cooler winters. In the mountains, however, things get pretty chilly and temperatures rarely rise above freezing.

Get there: Return flights to Beirut are available from most major UK airports. Prices start from around £350 return, although it’s possible to get cheaper last-minute deals online if you shop around.

Fly or hire? If you’re planning to explore Lebanon as part of a longer trip around Europe and the Middle East then it’s definitely worth taking your own bike, but consider the motorcycle restrictions in place south of Sidon when planning your route, and check www.fco.gov.uk for up-to-date travel advice on Syria and parts of Lebanon. James Cargo Services Ltd can transport a BMW R 1200 GS motorcycle to arrival into Beirut for £1,395 by air freight or £795 by ocean. See www.jamescargo.com.

Accommodation: In Beirut, Jeremy stayed at Talal’s New Hotel (www.talalhotel.com). “I like it because the owners are interesting’,” he says, “and it’s cheap. But it’s also sort of dingy.” If you’ve got a bit more cash to splash try Saifi Urban Gardens (www.saifigardens.com). It’s a popular spot though, so booking in advance is essential. There are also some great hotels to be found in Hamra, near the American University of Beirut. “These places are all so fantastic you can’t go wrong, but you’ll pay for the luxury,” says Jeremy. 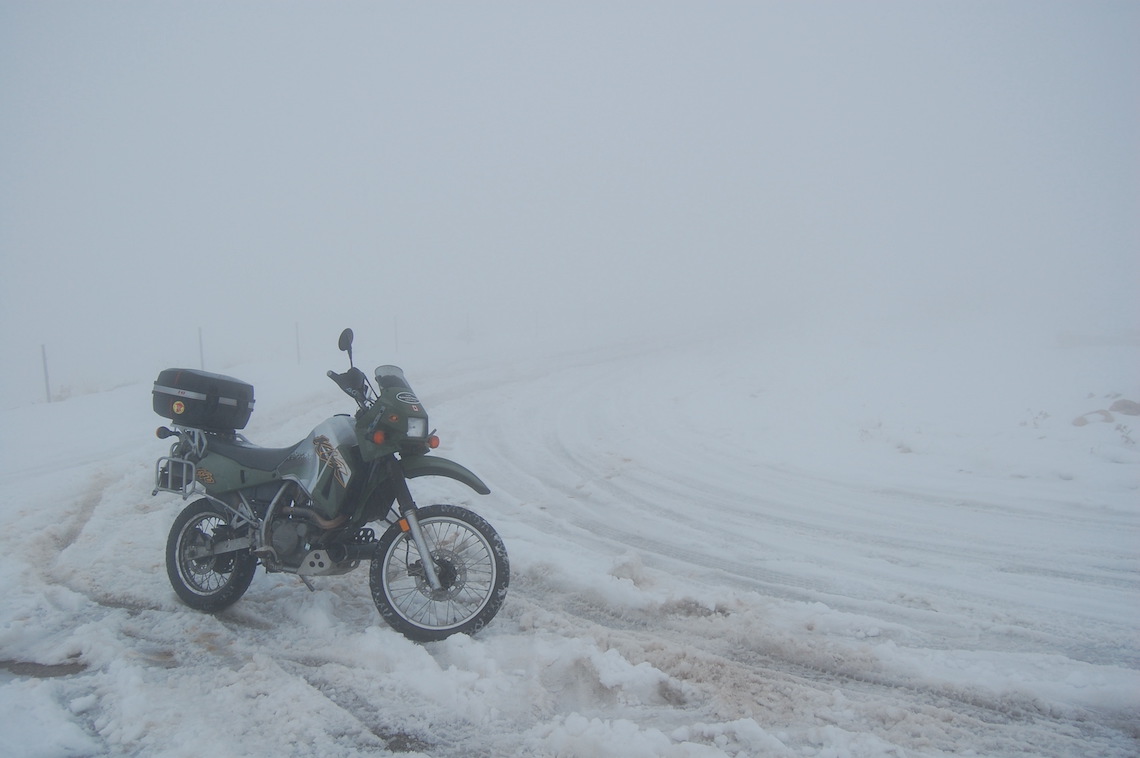 Paperwork for you: Officially you need an International Drivers Licence to ride in Lebanon, although reports from ABRs suggest it’s unlikely you’ll be asked to produce one. Do you want to risk getting caught out is the question? You’ll also need a visa and motorcycle insurance, both of which can be obtained at the border.

Paperwork for your bike: You’ll need a carnet to take your bike into Syria and Lebanon. Check www.fco.gov.uk for up-to-date travel advice in this area.

Is it for you? Jeremy travelled through Lebanon in winter, and if you’re a competent all-weather rider, the snowy landscapes are truly breath-taking. If you fancy some time off the bike, Lebanon’s also a top ski destination – who knew!? The Mediterranean climate makes for perfect blue-sky summer riding, a great time to explore this culturally rich country that perfectly combines glimpses of ancient history with the super-modern.