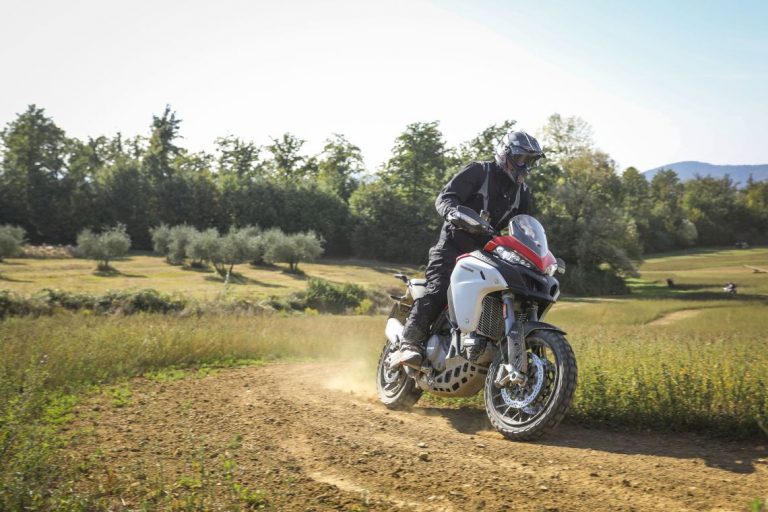 If you were going to pick a location to launch the next incarnation of your flagship adventure bike, you’d be hard pushed to do better than this. Deep in the heart of Tuscany, under the shadow of an ancient castle and surrounded by acres of rolling vineyards and olive groves, the setting for Ducati to unveil the all-new Multistrada Enduro 1260 was always going to impress.

The Italian brand had pulled out all the stops for the launch of the new bike, with a fleet of twenty box-fresh machines twinkling in the autumn sunlight. With journalists from California to Cologne invited to sample the fruits of their labours, you could see that this was an important event for the Bologna-based manufacturer.

And that in itself speaks volumes about the ever-increasing importance of the adventure sector within the motorcycle industry.

Only a short time ago, the thought that Ducati would give one single damn about producing a bike intended to stray off the tarmac would have been preposterous, yet here we are in 2018, some three years after the original 1200 Enduro was launched, admiring a very focussed and capable second incarnation of the machine.

The New Multistrada Enduro 1260 has had substantial changes in just about every department, and from the iconic flared nostrils of the front beak, through to the bigger engine in the centre to the sharply tapered back end, the new 1260 has gone under the microscope and emerged an entirely better machine.

In the presentation before riding the bikes, we’d been told that the production team’s aims were to make the big Multi more enjoyable, more accessible, more intuitive and with better performance and on the basis of our test, Ducati has ticked all the intended boxes.

Part of the problem with the outgoing bike was that it was really only enjoyable to ride if you were 6ft or over. With a towering seat height and a similarly lofty centre of gravity, the Enduro was a handful just to move around the car park, let alone muscle over mountains.

The new bike has been quite literally bought down to earth in every way with a lower seat, lower ride height, lower bars and lower footpegs. Lower price? Well, maybe not everything. But Ducati has not just lowered the Multistrada Enduro, they also worked on making it easier to ride, with improved bottom-end torque and tractability from the new powerplant, shorter gear ratios and lowered centre of gravity.

The electronic suspension has been revised to offer over a panoply of different settings and options for the rider, and the electronics can now both control and monitor the suspension’s performance as you ride, with data now downloadable to your smartphone. Ducati has also upgraded its information systems too, as clearly the previous model had proved far from intuitive to owners.

The large TFT screen now has a new interface and the whole operating system has been worked over to make the process of navigating the options far more obvious and painless. From ABS to wheelie control, suspension to tyre pressures, almost everything can be adjusted or monitored from the spacious cockpit.

But with all these changes, Ducati has played it safe with the colour options for the Multistrada Enduro, offering only the classic Ducati red and the textured sand as options for the very limited bodywork.

We’ll be giving you the full details of the new bike and the test in the next issue of Adventure Bike Rider, but for the moment we’re happy to confirm that the new bike is a considerable and significant improvement on the 2018 model and that Ducati has achieved much of what they set out to do with the 1260.

The new bike is hugely enjoyable and engaging to ride on both road and, importantly for an enduro bike, off-road, assuming, of course, you can ignore the inherent madness needed to take a motorcycle costing £20,000 pounds anywhere near a dirt track…