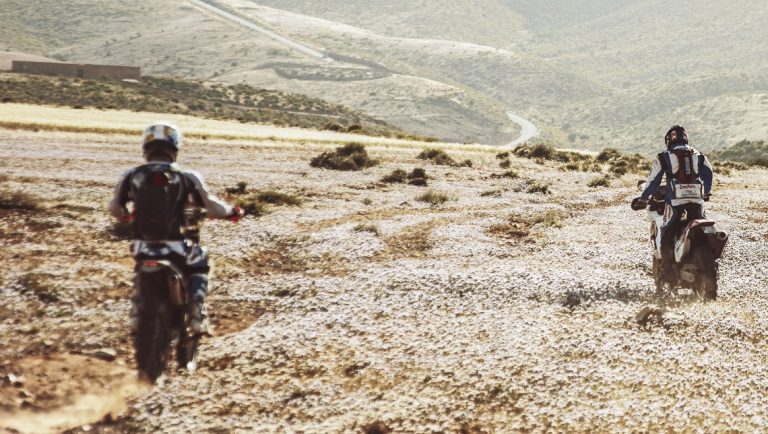 Sandraiders is a six-day raid in southern Morocco, taking in more than 1,000 miles of off-road tracks with the only stipulation being that you have to ride a vintage adventure bike from the Paris-Dakar rallies of the ‘80s. I was shooting and riding for the duration of the trip and it was an amazing experience, far from everything I thought I knew. The raid starts in Agadir on the west coast of Morroco and heads to M’hamid in six steps, each one offering a different challenge to the riders. What follows is my journey, in pictures, through each of these stages.

The first day was probably the hardest. Riding off-road for so long, on such varying terrain is not something I do often. The difficulty was compounded by the strong sun overhead and the challenge of piloting an unknown bike.

This picture was taken after a small orientation mistake as we left the dunes and the beach. We had to reach the GPS track using a shortcut through giant flower fields. The plants were slippery under tyre, but beautiful nonetheless. By the first day, we already had the feeling of being on another planet. 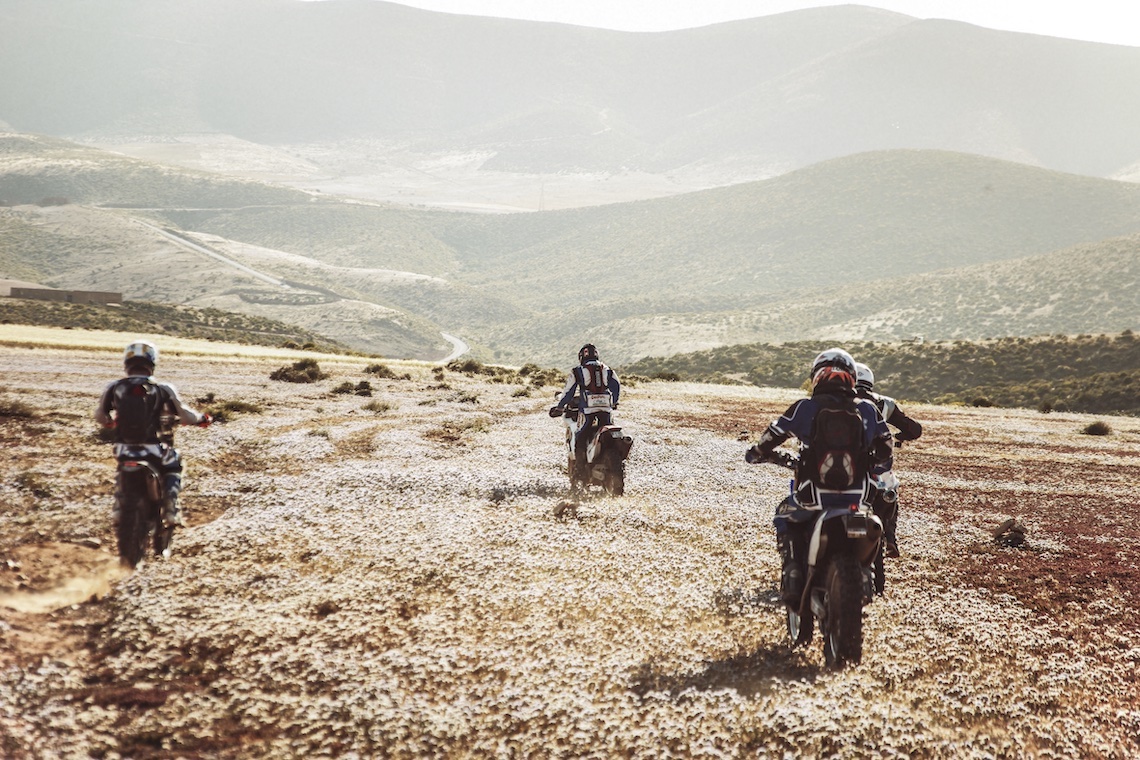 Early on in the day, we reached the ‘white beach’. The tide went out and then, with our throttles pinned back fully, we had 40 miles of total freedom. The bikes glided over the wet sand, on the left-hand side of us were big dunes and on the right sat the wild Atlantic Ocean. In the middle lay a large beach, totally empty and occasionally shrouded in mist, at the end of the beach, far away, was Mauritania.

Thinking about this moment still gives me a shiver. I was riding in the company of three Africa Twins. We were moving fast and the ground quickly changed colour. Where there once was sand was now covered in small pieces of shell. Lose speed here and you’re immediately stuck. That’s what happened to my friend riding this poor water licked Africa Twin. I took a picture before running into the water with the other guys to get the bike out of there. 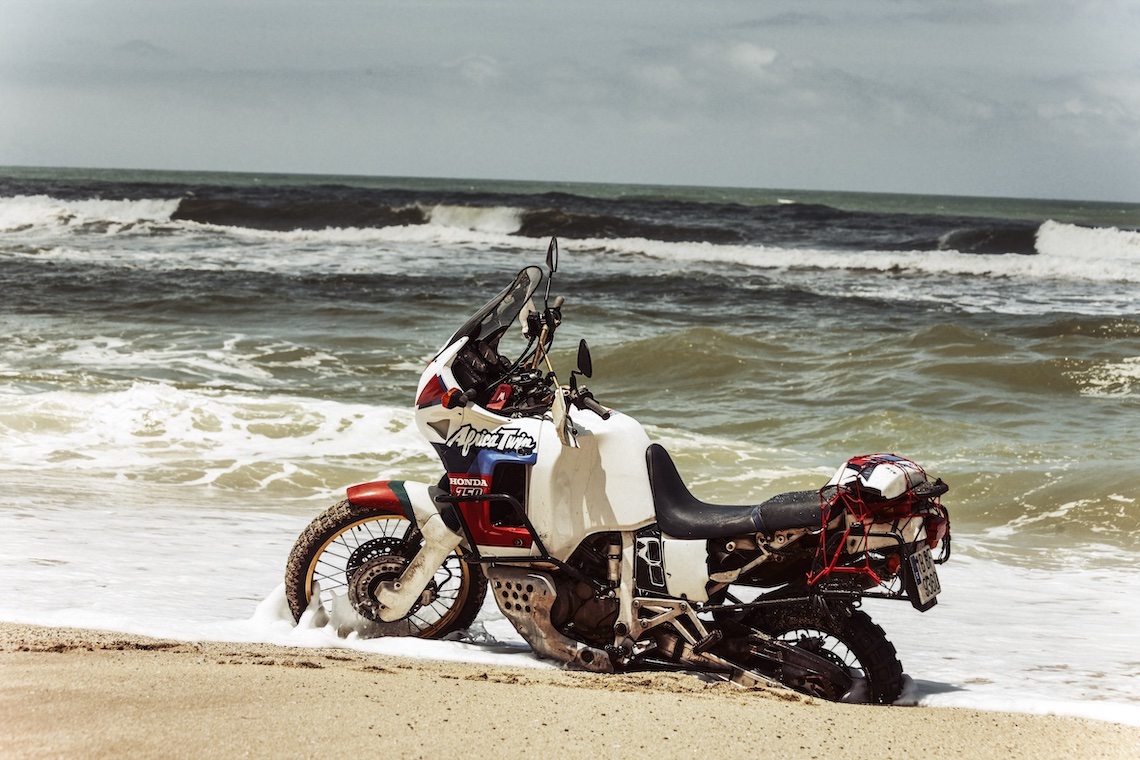 On this day we left the beaches through a dried-up river bed, where we joined the desert plain. The ocean’s freshness doesn’t reach this far inland and the air is stifling. This is an old Paris-Dakar stage, and the men and their machines are tested severely.

We crossed one tiny and forgotten village, sleeping under the strongest sun I had ever felt. This picture was taken just before we stopped to try to find fuel in this forgotten part of the world. People offered us a lifeline in the form of mint tea in a cool house. I loved that Honda 600XR.

Reliable, powerful, light and compact, the perfect weapon for a vintage sport raid. My friend is waiting there in the vastness of Morocco and that’s why I love it here, your line of sight is rarely blocked by any kind of structure. You can always see for miles, a real feeling of freedom. For some, it can be oppressive, but for me I love it and miss it whenever I return to reality. 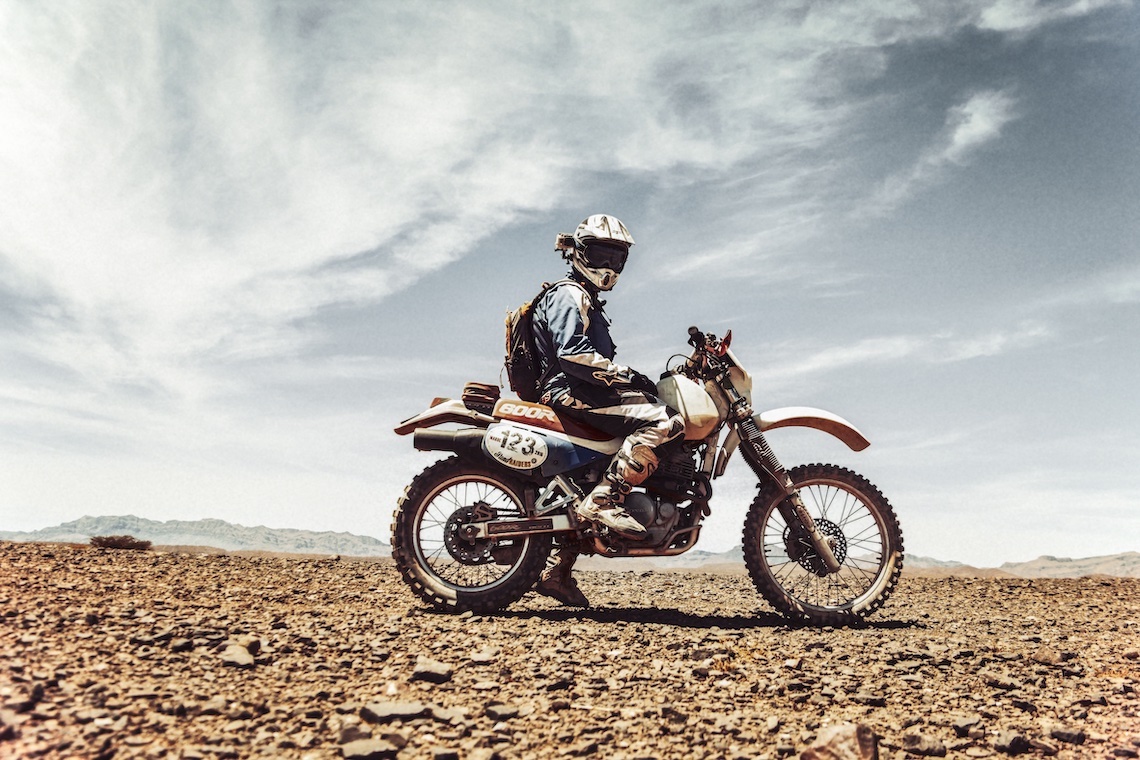 On day four our expedition progressed through large, wild and empty landscapes. Leaving the desert for more hilly fields. We were heading towards the Anti-Atlas, the most northern part of Morocco’s highest mountain range.

We crossed some amazing oasis’ and canyons, maybe one of the most beautiful in the whole of Morocco. I remember taking this picture in one of those canyons while we played for a while. We can see here the dry and sculptured landscape and we can almost feel the heat resonating from the photo. The thermometer flirted with 57C. 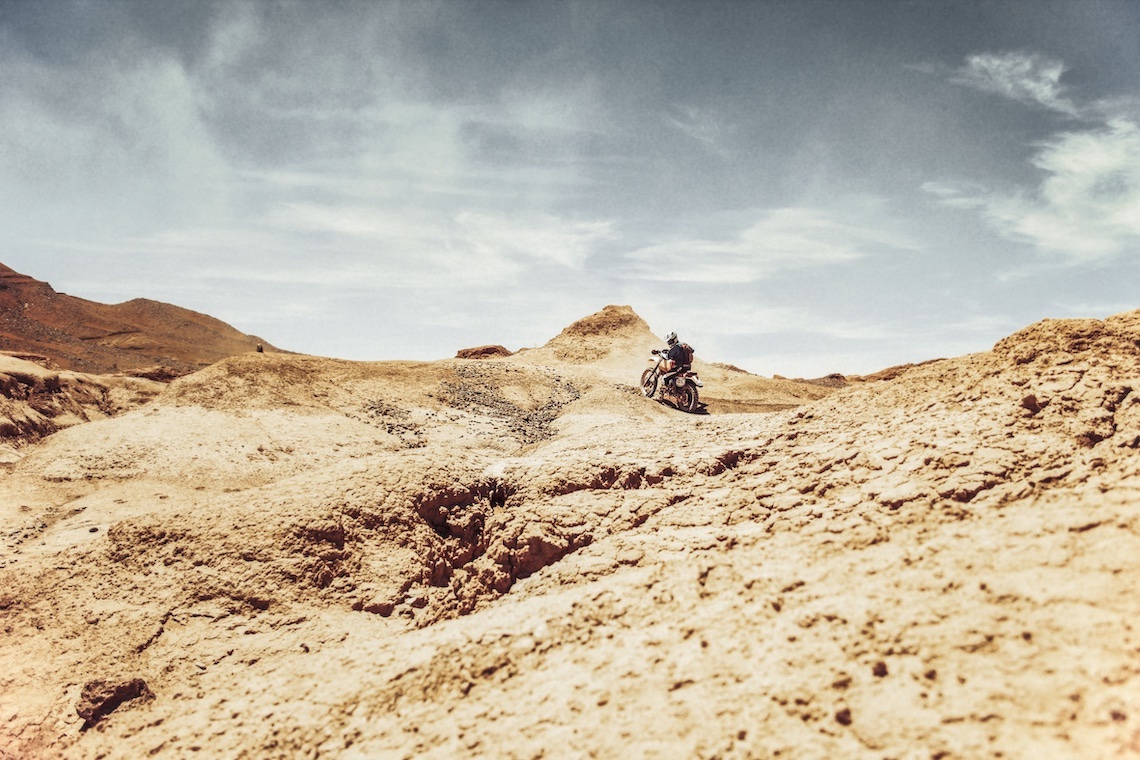 This day we rode through the biggest dry lake in all of Morocco, Lake Iriki. The heat and dust are the only things around for miles. We stumbled upon one small house, seemingly in the middle of nowhere, with a few teenagers selling hot Coca Cola. After a deserved break we hit the first small dunes. Soon they became the only landscape, eating everything around, growing and growing to become mountains of sand. We were finally entering the famous Sahara Desert.

Jordi Arcarons, the famed Dakar rider, guides us carefully through the playground that can also be a graveyard. With his strong history of professional riding he explained how it works to stay alive, and to avoid bad surprises. Always look behind a dune instead of crossing it full throttle, there might be an abrupt ravine instead of a smooth slope on the other side.

I took this picture when Jordi was doing ground recognition. I had the feeling he was surfing on a massive yellow wave. This is exactly what I felt when I followed him into the vastness of the desert. 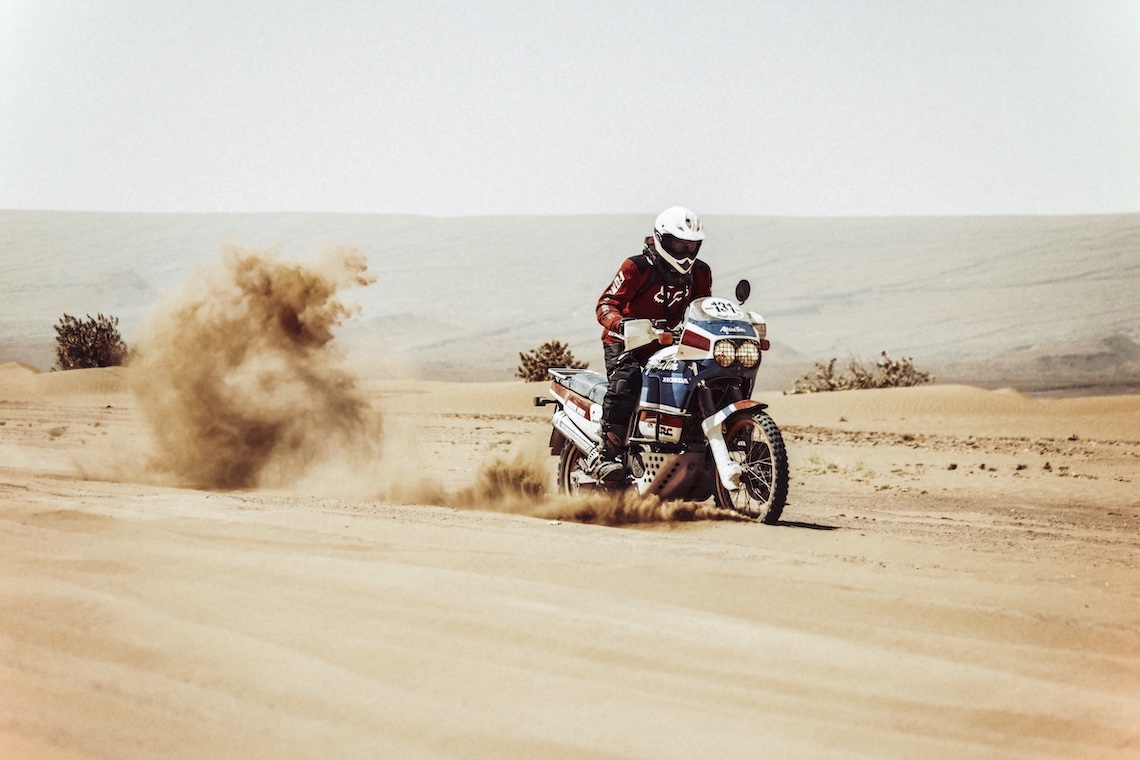 This was the last step of our incredible adventure through the fesh-fesh, also called the ‘pilot’s nightmare’. A wide expanse of really, really soft sand. The riding technique is easy: look far ahead, stand on pegs and full power. The sand gradually gets softer and softer, and the sun is rising, so we better leave early. 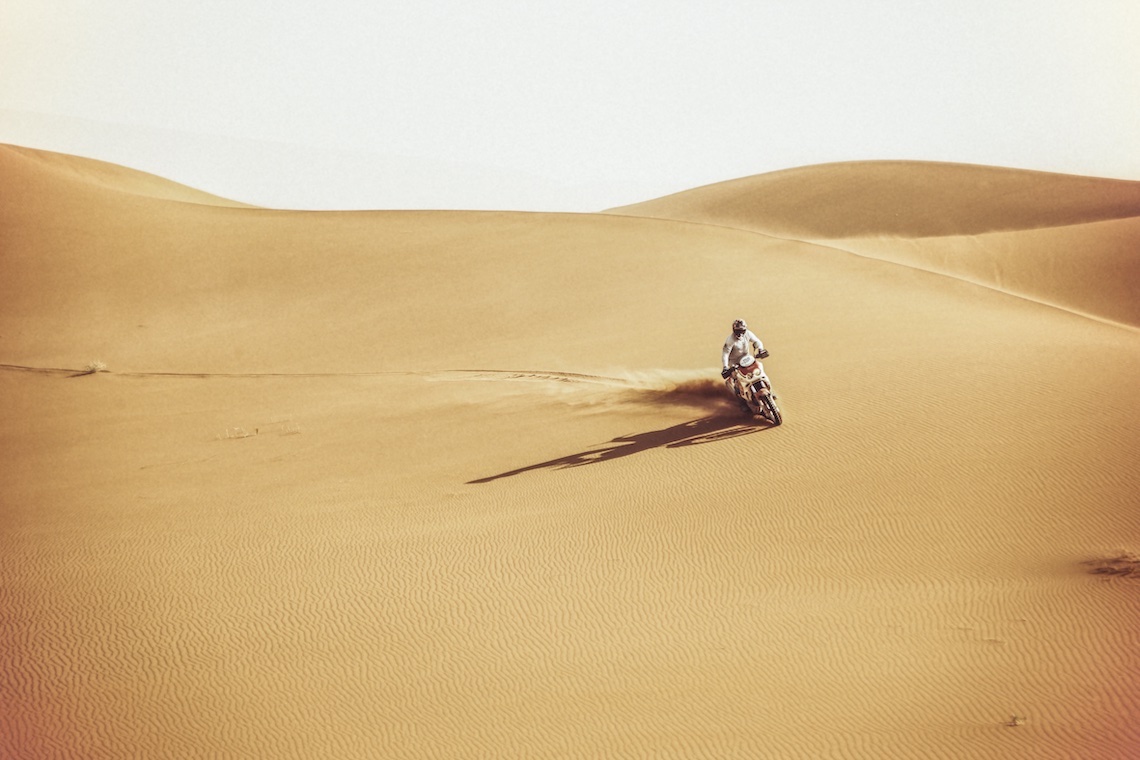