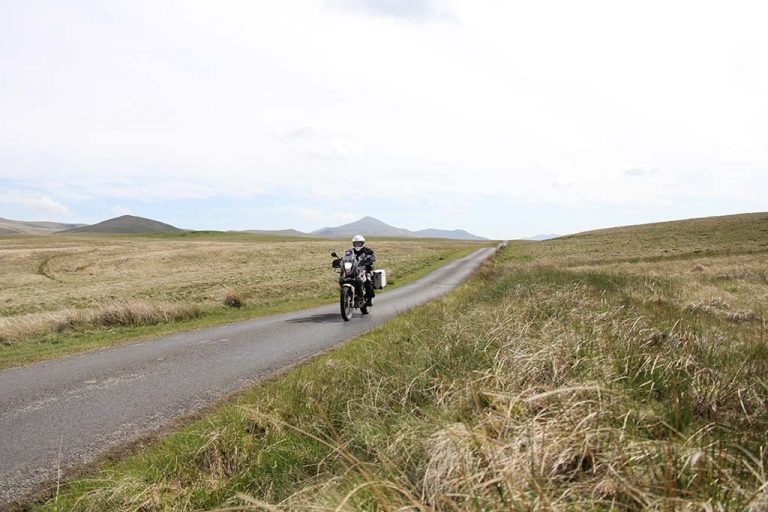 In The Last Instalment Of Our Round England And Wales Ride, Bryn Davies Heads To Cumbria

It’s been a long road, but boy has it been worth it. Over the past year, in collaboration with TomTom, we’ve circumnavigated England and Wales, sticking mainly to the coastline seeing the incredible sights, discovering the fascinating locations and riding some of the best roads both countries offer.

We performed the 2,000-plus mile route in a series two-day rides, tackling Wales, the South West, the South and South East, the East, the North and finally, in this issue the North West.

Starting where we finished off in last issue’s epic North and North East ride, in Wetheral on the outskirts of Carlisle, it’s not long before we’re exploring some of the UK’s most beautiful scenery and exciting roads.

In previous issues, we’ve stuck as close to the coast as we can, but to do so on this section would mean missing out on the wonders that await within the Lake District. With this in mind, we snake our way down through the National Park, taking in as many iconic roads and passes as possible. Our first night sees us hunker down in Kendal, ready to begin the next day’s journey.

Having ridden through one of the most picturesque locations on our island, you’d be forgiven for thinking that day two couldn’t possibly live up to the high standards that have been set.

Think again. As we first head northeast to the highest inn in Britain, Tan Hill Inn. After a quick coffee, the Yorkshire Dales are yours to explore as you head south via Hawes, taking in the beautiful Malham Cove.

To round off an excellent two days in the saddle we head west and into the bleak Forest of Bowland, riding the roads that bisect the wild landscape. Our ride comes to an end in Burnley, though if you wish to continue the circumnavigation you’ll want to head down the M6 and M56, linking on to the Wales Weekender which kicked off our Discover Britain in issue 32 of ABR.

We hope you enjoy riding these routes, we’ve had a blast mapping them out. 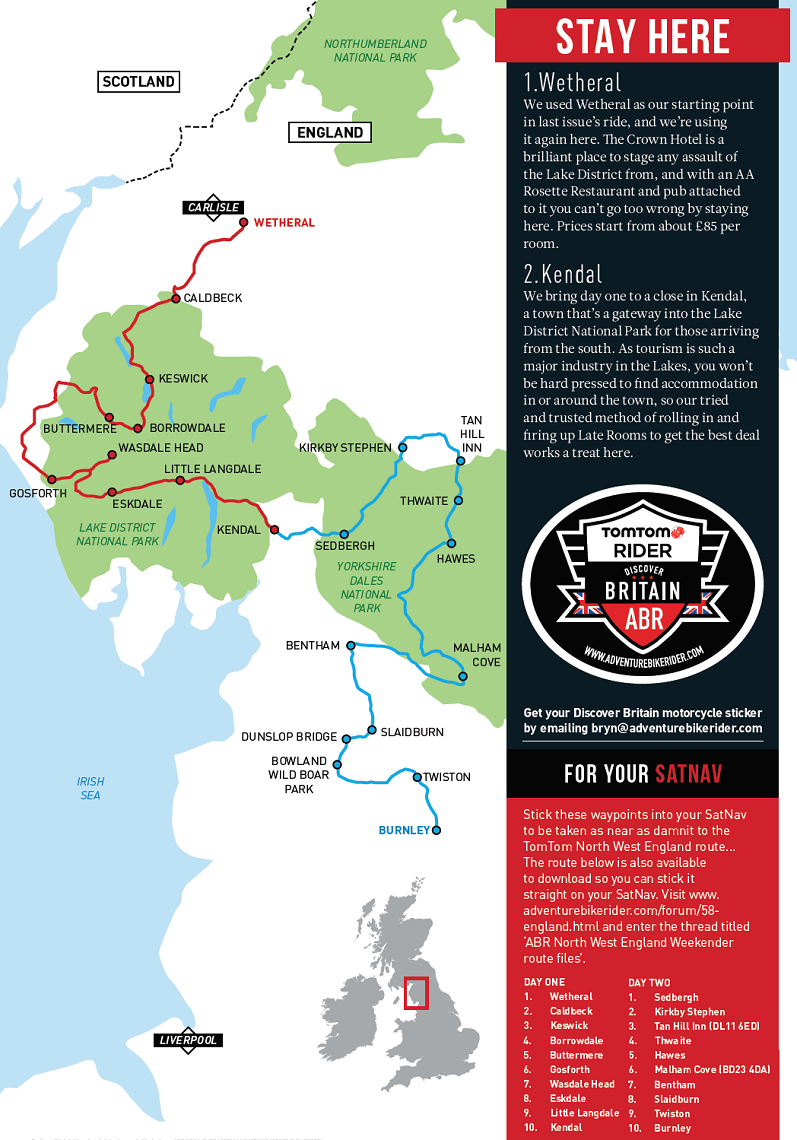 While the temptation in the Lake District is to head to the beautiful valleys and exciting passes of the south and middle of the National Park, doing so would mean missing out on some of the area’s best bits. Caldbeck Common is one such place that should be ridden, not necessarily for the quality of its roads, but for the wild, untamed sights you get of England’s highest peaks.

Through Caldbeck, which sits on the outskirts of the National Park boundaries, head down the B5299 (you’ll be hard pushed to pick up speed here as you gaze in awe at the rugged scenery) and take a left about a mile and a half before Uldale for the best sights. 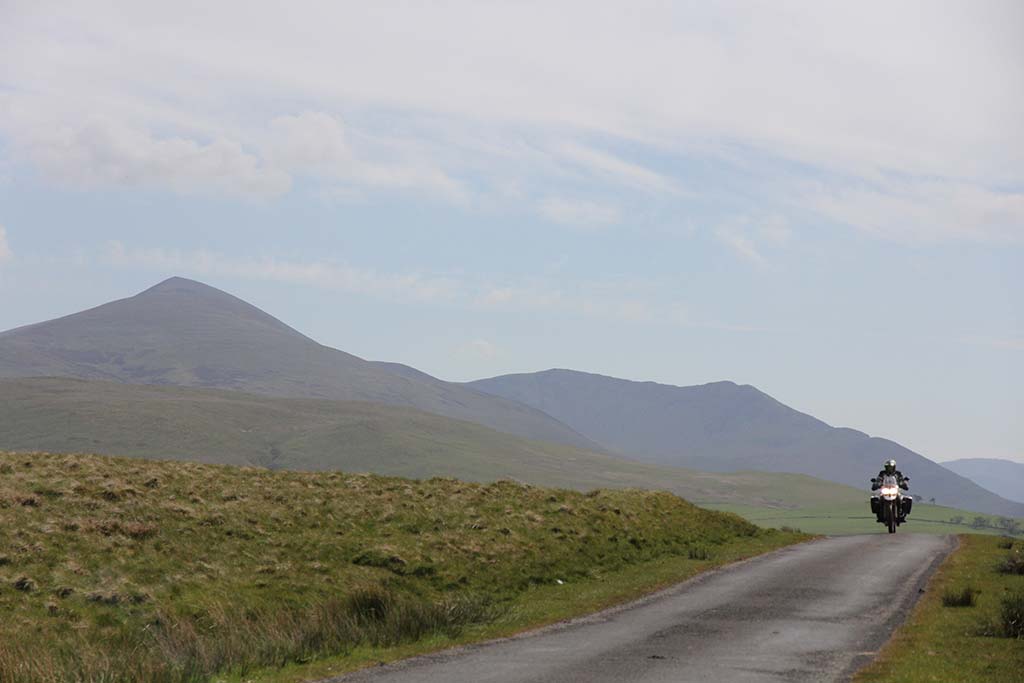 With a depth of 79 metres and a length of almost three miles, Wast Water is the deepest lake in England. But it’s not what’s beneath the water that’s worth the ride. Surrounding the lake are some of England’s most beautiful fells, and a lonely road skirts the shores of the water to take you, in solitude, on what must be one of the UK’s most scenic and serene rides.

As you reach the head of the Wasdale Valley, you’ll be surrounded by some of the Lake District’s highest peaks, including Scafell Pike, England’s highest mountain. The road into Wasdale Valley is a dead end, so you’ll have to ride back on yourself to make the journey to Hardknott and Wrynose, but it’s worth it. 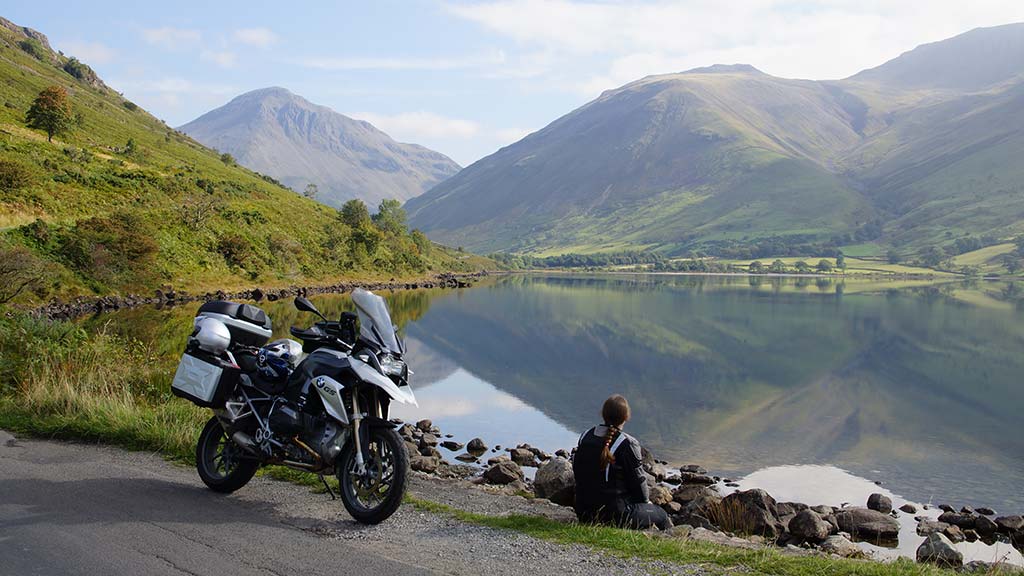 Head south-west out of Keswick, following Borrowdale Rd, and you’ll eventually come to Honister Slate Mine. It’s well worth putting some time aside to explore the many attractions here, including a trip into the underground slate mines. For those looking for something a bit more extreme, the mine is also home to one of the UK’s only via ferratas, a series of metal cables, rungs and ladders that will take you up the exposed face of Fleetwith Pike.

Getting back to the bike you’re rewarded with the ride up Honister Pass and along Crummock Water. Visit www.honister.com for more information on the mine, as well as prices for the various tours that are run there. 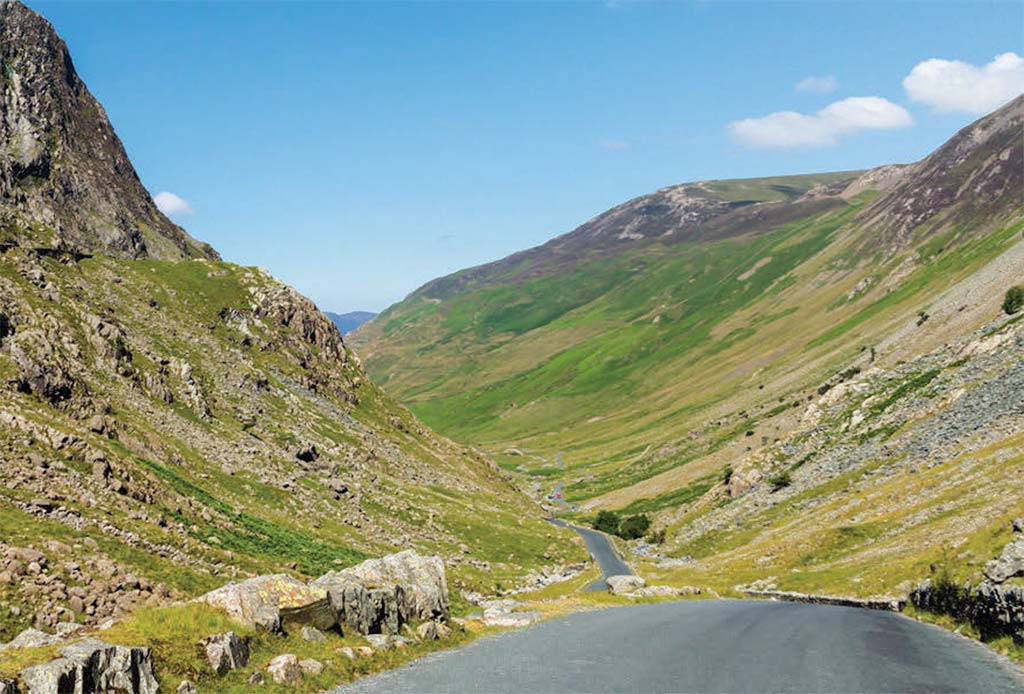 Nearing the end of our ride we enter the Forest of Bowland, an area of desolate moorland and gritstone fells. There are only a few roads that take you through here and you won’t be disappointed with any of them. The area and the adjoining Pendle Hill have a rather dark past when, in 1612, 10 women were executed on the moors after they were accused of being witches.

The trial became one of England’s most famous witch trials and in remembrance of the 10 women who were put to death, you can now follow the Lancashire Witches Driving Trail, which takes you on the route the Pendle Witches took when they were sentenced, from Barrowford to Lancaster. 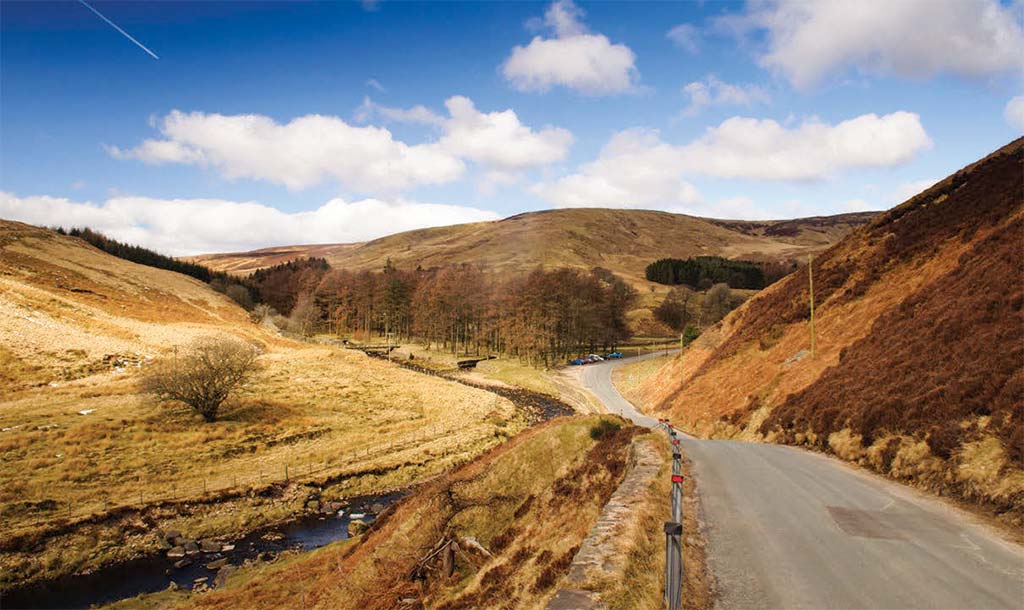 No tour of the Lake District would be complete without a ride of two of Britain’s most famous passes, Hardknott and Wrynose. With inclines of up to 30% on Hardknott, these two roads link Little Langdale in the east with Eskdale in the west, meeting at Cockley Beck in the middle.

Hardknott is often regarded as Britain’s most challenging pass due to the sharp bends and steep inclines, and it was described by iconic author, Alfred Wainwright, as a “heartstopping series of sharp and narrow hairpin bends”. Reaching 393m, they may not be able to offer the altitude of the Alpine passes, but they certainly compete when it comes to enjoyment. 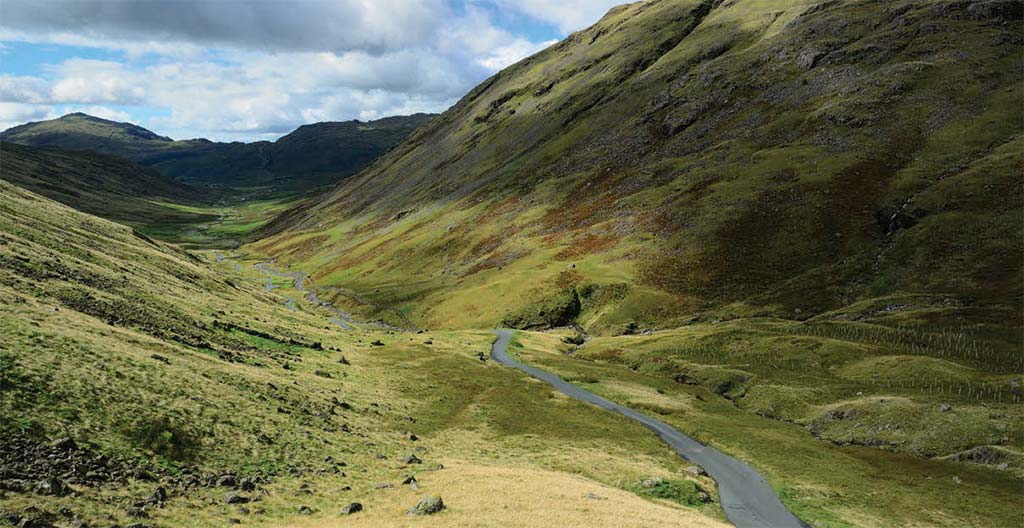 It seems that you can’t take a bad road in the Yorkshire Dales. Buttertubs Pass is a superb route that takes you from Simonstone to Thwaite, and Jeremy Clarkson called it “England’s only truly spectacular road”. I’ll disagree with Clarkson there because throughout our weekend route you’ll be tackling some of the epic stretches of tarmac in England, and it’s hard to pick a best road out of the bunch.

The climb up Tan Hill on the northern boundary of the Dales is also one of the best. As you rise up to the crest of the hill you’re afforded sublime views across Yorkshire, and sitting on its lonesome at the top is Britain’s highest Inn, Tan Hill Inn. 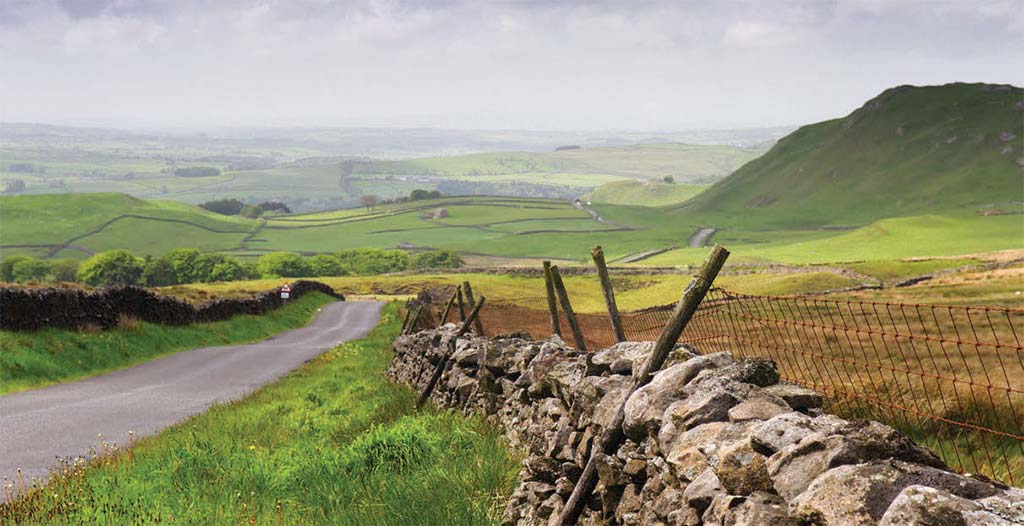