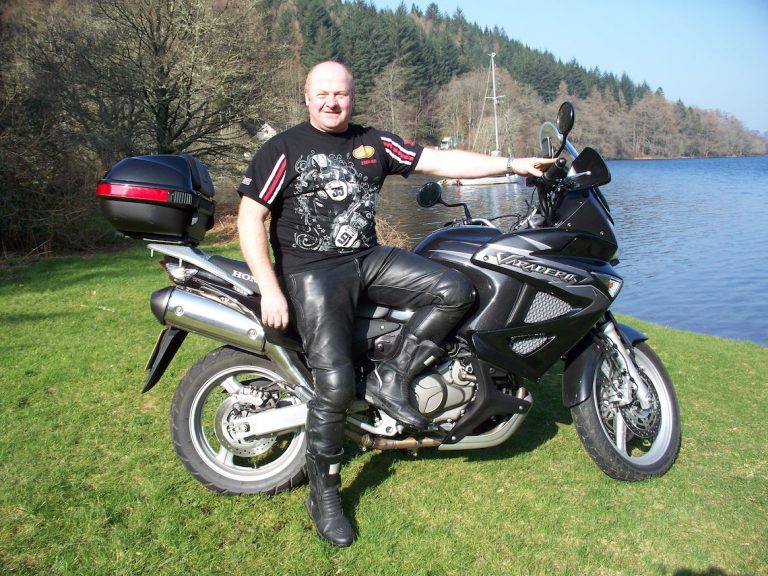 ABR member Jim Simpson – aka Africa Jim – has a 2009 ‘Mighty’ Honda Varadero XL1000V VA9 and beauteous Morayshire on his doorstep. Be prepared to feel a bit jealous…

I live in the beautiful City of Elgin in the north east of Scotland, which enjoys some of the best weather in the country. This is due to a micro climate provided by the protection of the mountains in the west and the gulfstream spilling into the Moray Firth from the Caledonian Canal. Based next to the Spey valley and the legendary whisky trail, it’s an ideal spot for adventure bike riding. Inverness is 40 miles from here, and then there are the north and west Highlands to explore!

I’ve owned many bikes over the years, from sports bikes to motocross. As the decades have worn on, I’ve settled with large traillie-style adventure bikes, which are more suited to the road conditions we have up here in the Highlands. So, after a couple of Kawasaki KLRs, a couple of Honda Dominators and several years on a Honda XRV 750

Africa Twin, I asked the fatal question: what to replace the Twin with? I tried two possible candidates – the Triumph Tiger 955i and the Honda XL1000V Varadero. The Tiger was a very smooth bike; the triple engine’s sweet and it was capable, but lacked the low-down grunt of the V twin Hondas, and, sadly, the suspension succumbed when two up and loaded with luggage. Add to this the poor headlights and terrible wind noise, and it was clear to me that the Varadero had the edge. 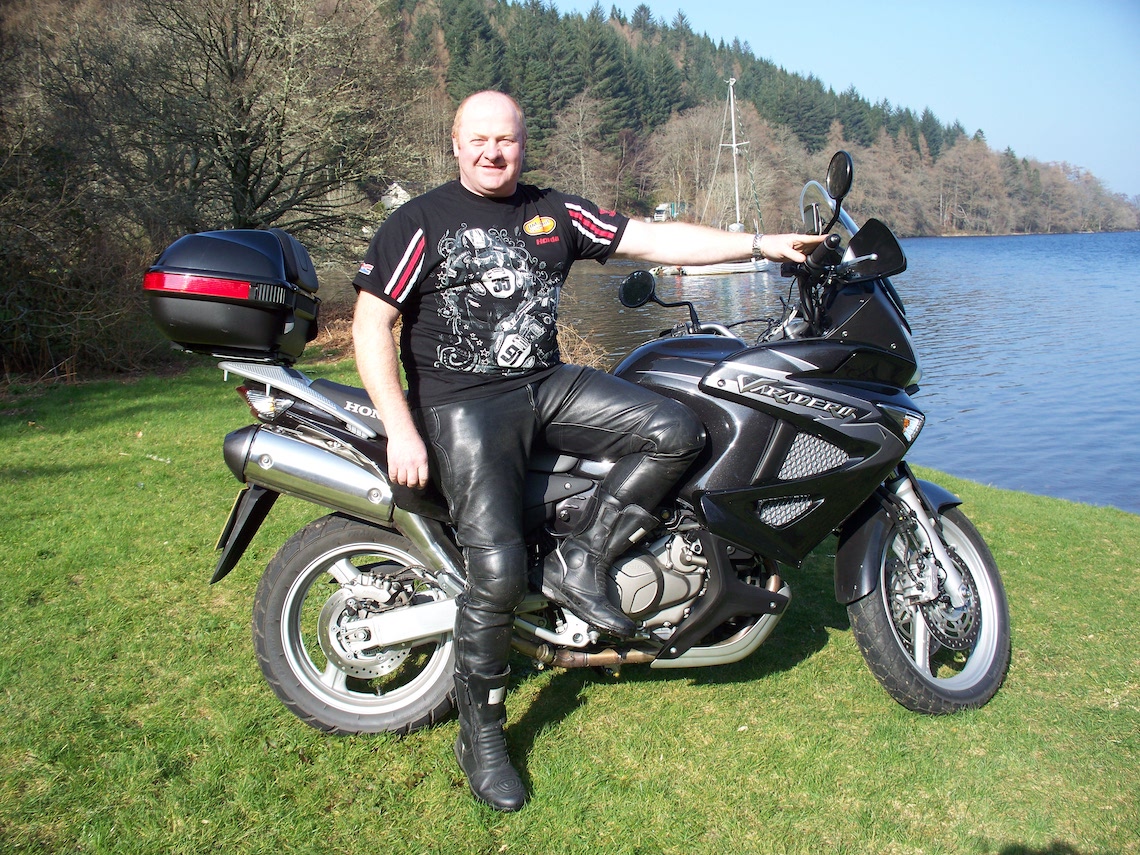 I’ve owned both the five-speed carb model and the six-speed EFI, the only difference between them being the carb model has a thirst when ridden hard! I’ve covered 15,000 miles on my VA9 all over Europe touring two up, and quite a few miles off-road on hard tracks. The EFI and six-speed box has addressed the thirst issue on the Carbadero – even riding hard the bike returns 45mpg, although riding the bike sensibly it sees well over 50mpg, giving 250 miles to the tank.

The seating position, controls, dash, and the delivery of the Honda V twin motor mean the Varaderofelt instantly familiar. Honda has produced exactly what it promised; Africa Twin owners said they wanted a more comfortable seat and more power, and the Varadero delivers on both counts. It may not be the replacement for the Africa Twin, but neither is the Transalp, and I, along with a few others in the XRV fraternity, believe Honda has a large hole in its adventure bike market which is slowly being filled by the BMW F800 GS and the new up-and-coming 800XC Tiger.

The Showa suspension with adjustable preload and damping can be set up to cater for all styles of riding, from two-up luggage carrying to one-up scratching. The bike handles so well on decent rubber to cause serious damage to the footrests in tight corners – the hero blobs on mine are almost gone! The 996cc V twin at 95BHP has ample power for lugging two people, a full set of luggage, and a tent all round Europe and never break sweat!

The lights are to die for. As with most Hondas, the headlights are excellent and confidence inspiring. The fairing and screen provide ample weather protection, coupled with heated OEM grips which make riding in all weather a dream. I’d go as far as say the Mighty Varadero is the best value for money two-up tourer made today. That and legendary Honda build quality! 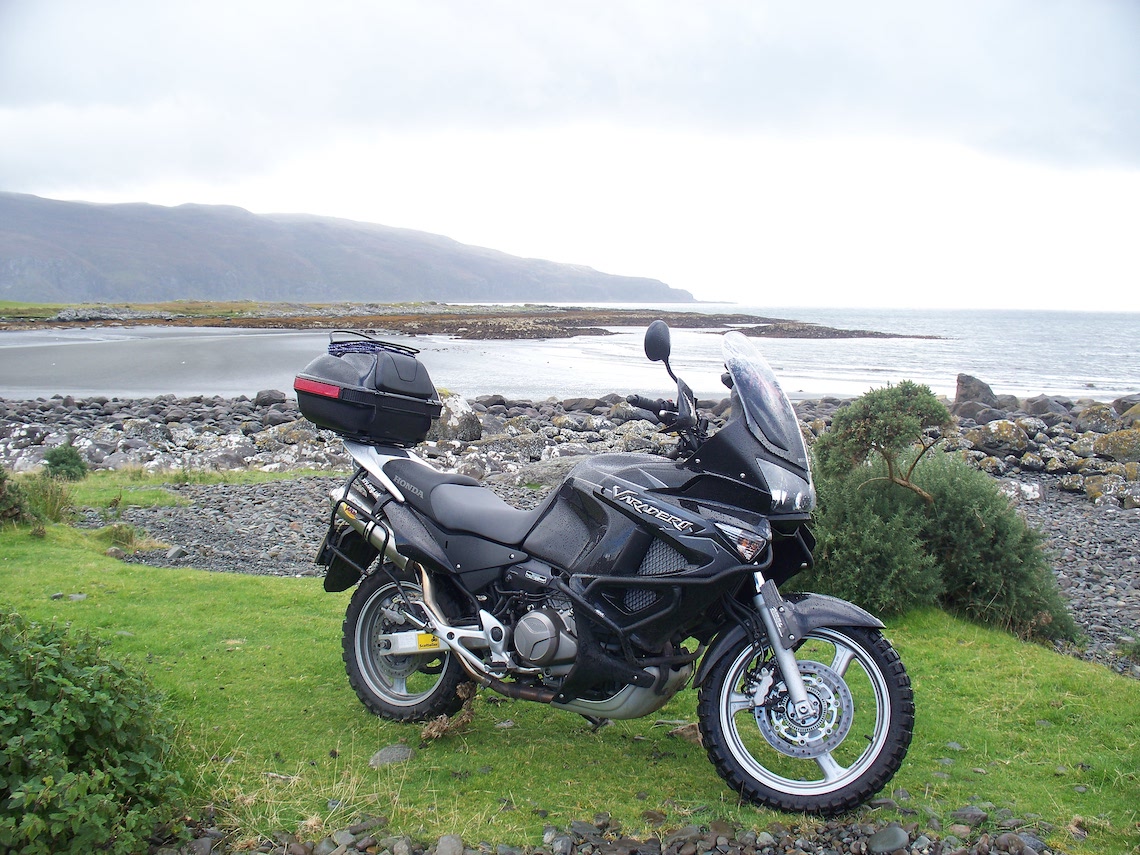 Off the tar it’s a large beast and has to be handled with respect. I’ve over-cooked mine in the dirt and landed on my backside enough times to prove it; decent crash bars are a must-have! I’ve taken it to the top of the Col de Sommelier at the Stella and can vouch for the bike being quite controllable on hard tracks. I’ve also covered many miles in the forests of Galloway with TKC80 tyres for added grip on the ruts and found the Varadero faultless.

Fully loaded, it takes an OEM topbox (made by Givi for Honda) with a Givi top carrier, Givi side luggage and an Oxford tank bag. Sat nav is a Tomtom one XL in a Ram mount, backed up by good old-fashioned maps in the tank bag! Power is supplied by a dash-mounted socket with a second socket under the seat for charging while on the move. Telephone, mp3 player and sat nav directions are all provided by Nokia via bluetooth to a Scala rider headset.

Although the seat is as plush as a leather armchair I still complement it with a sheepskin. I find this gives greater long-distance comfort. Whether riding two up or solo, the Mighty Varadero eats up the miles and never misses a beat; in over 30,000 miles touring I’ve never encountered any kind of mechanical issues, which speaks volumes for the longevity of these bikes.

Ok, the X certificate bit. Look away if you dislike abuse… The VA9 can make 60mph in under four seconds, it can almost touch 140mph (indicated) on the Autobahn – 130 two up – and has the power to hoist the front wheel off the throttle in first and occasionally in second. Wheelspin is controllable in both wet and dry conditions. Braking is excellent, especially with the linked ABS – enough for mild stoppies! TKC80 tyres are a godsend for off-road use, preventing the front from washing out, and give reasonable drive on hard surfaces. Tar will see the rear shredded in 2,000 miles, though. For tar use, Michelin Anakee
2s are good value and the rear will do around 6,000 miles; these will see the pegs touch down if pressed hard. I’ve had the VA9 so far down that a pannier touched the deck in the Alps once! 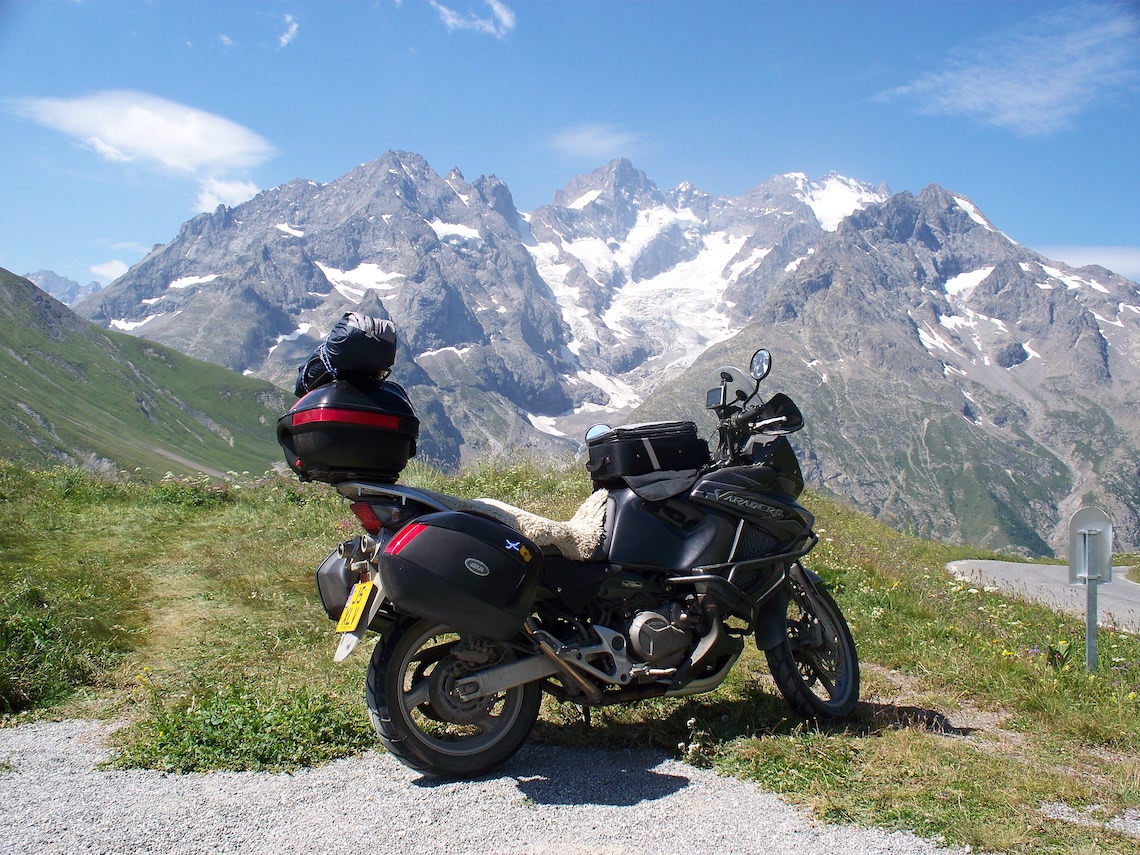 Although I am seriously looking at the new Triumph 800XC as a second bike, I have no plans to sell my beloved Varadero. I still think it’s a seriously good-looking bike with a bulletproof engine that pulls like a train. The all-new all-singing and dancing Honda Crosstourer will have to be quite a bike to better the Mighty Varadero.

The ‘mighty’ Varadero on Africa Jim…

Although I’m well looked after (indoors over the winter and washed, polished and serviced regularly) Jim’s very hard on me. I’ve been thrown up the road on my side that many times – he rides me like he stole me and the weight I’m made to carry on holidays is astounding. Oh, and perhaps someone could tell my owner I’m not a ****ing unicycle; both wheels are supposed to stay on the ground! It’s so hard on the running gear popping wheelies all the time. Contrary to Jim’s belief, I do not like the beach. That sand gets everywhere. Regardless of his constant need for air and the attempts to remove my footpegs by tearing them along the ground, I’ll continue to give sterling service, because I’m a Honda.