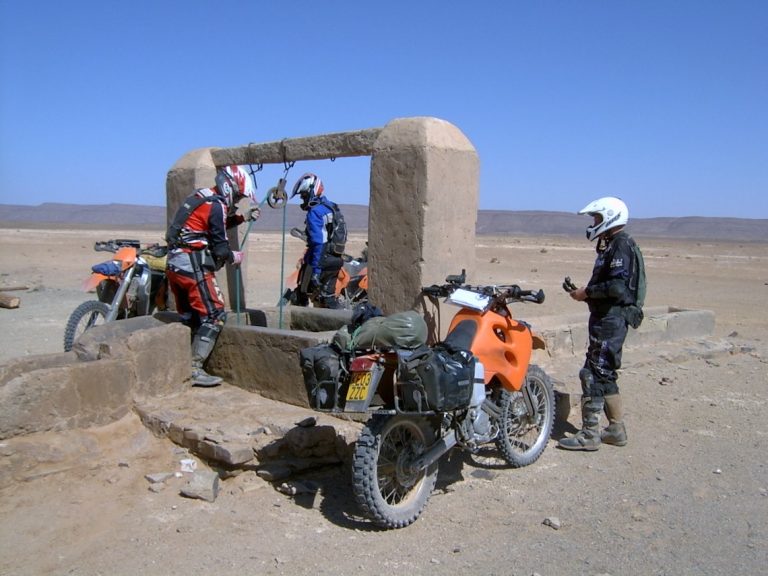 TV’s Dr Mike Leahy’s no stranger to foreign food- and drink-induced nasties. From growing pet tape worms in his guts to munching down juicy Sago grubs in Asia, he’s got the low down on what should go in and what to leave off the menu when motorcycling abroad

A recent report by the Foreign Office stated that in 2010 there was a 15 percent increase in British citizens needing assistance from the UK government due to accidents and illnesses which occurred while travelling overseas. The 3,689 people it helped would have represented the tip of the iceberg, however, because the vast majority of accidents and illnesses simply wouldn’t have been reported to the foreign office. The trend is still worrying.

Of all the incidents reported, most involved drink or drugs and a very high proportion involved motorcycles. OK, so stoned partygoers wobbling across a Thai Island on a cheap Chinese rental scooter hardly qualifies as ‘adventure motorcycling’ but it’s hard to deny that ABRs tick most of the boxes when it comes to high-risk travel.

As adventure motorcycle riders, we face very different challenges to most holiday makers and tourists. We don’t often work with tour operators; we deliberately seek out remote and isolated places and for many, me included, it’s the thrill of the unknown which keeps us on our toes.

The most common accidents and illnesses are all too often the most obvious and avoidable. In later issues, I’ll be addressing the obscure and sometimes totally weird threats that we may face. For now, though, let’s look at what are statistically the most common and predictable health issues we’re likely to encounter when adventuring abroad by bike. Not surprisingly, they concern food and drink. 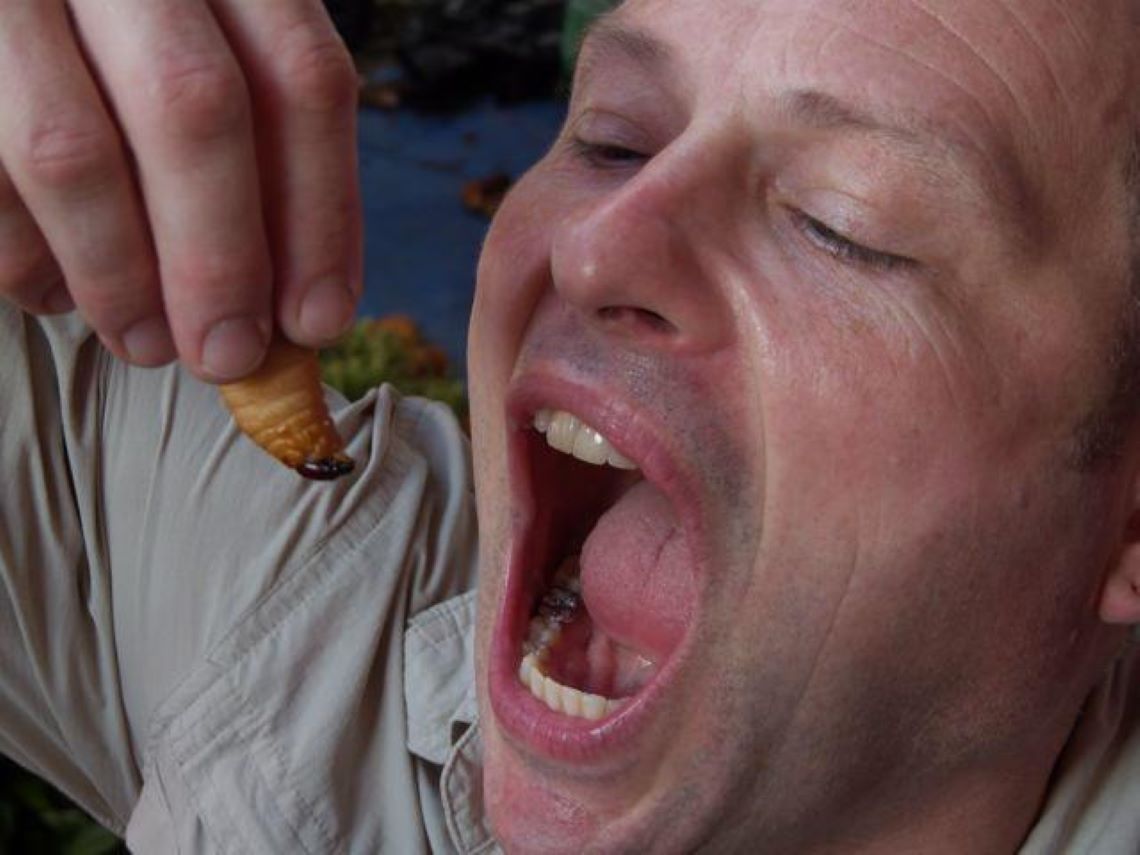 I always maintain that however brave, strong or adventurous you are, the secret to a successful trip is being able to sleep, shit and eat properly. The temptation for many when it comes to eating abroad is to stick to familiar foods, but this can be a huge mistake. British-style buffets are a very bad idea, particularly in the tropics, as they’re the perfect bug-growing environment for tummy-turning nasties.

My advice would be never eat at a buffet, no matter how posh the restaurant or hotel appears to be. You should also avoid eating in establishments where you can’t see the kitchen. Often, it’s far better to ignore your gut instinct and eat at the places which may seem the scariest and least familiar, like street stalls and roadside vendors. In India, for example, you can buy food which has been prepared and cooked in full view; you can watch your lunch being fried in boiling oil on the roadside, and few bugs are going to survive that. What’s more, a good, nourishing and tasty meal can be bought for under 20p – bargain! 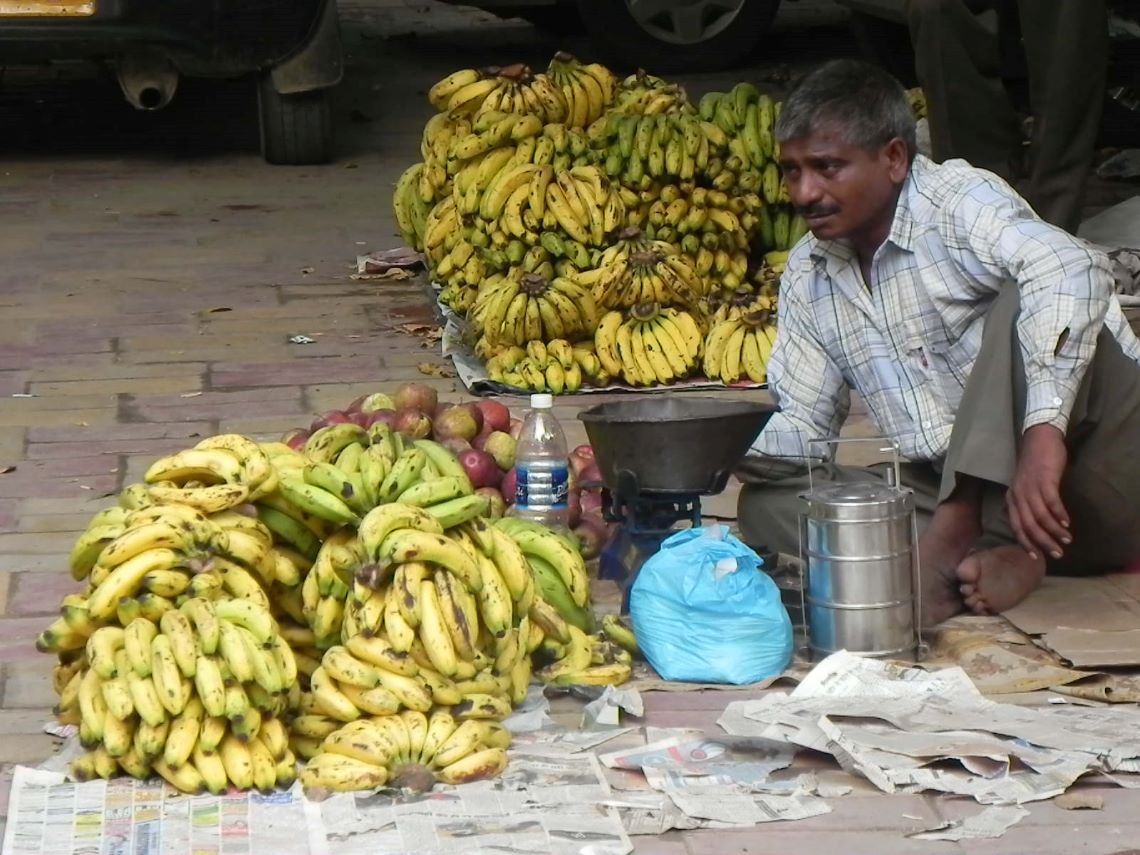 Anything in a skin or shell is usually a safe bet; hard-boiled eggs, bananas and oranges, for example. Only eat salad if it has been washed in drinking water, some- thing that is often done at cafes aimed at backpackers. When travelling in developing countries, if it’s not stated on the menu that salad is cleaned in drinking water, assume that it’s been washed in something akin to dilute sewage and don’t eat it.

Tapeworms are a big potential threat, particularly in Mexico and parts of Indonesia. If you’re infected with a pork tapeworm you might even end up with a tapeworm cyst growing inside your brain, which can be fatal. In order to avoid having a four-metre worm growing in your guts, or a cyst in the brain, always make sure that any meat you eat while travelling in developing countries is well cooked, and always wash your hands thoroughly before eating. 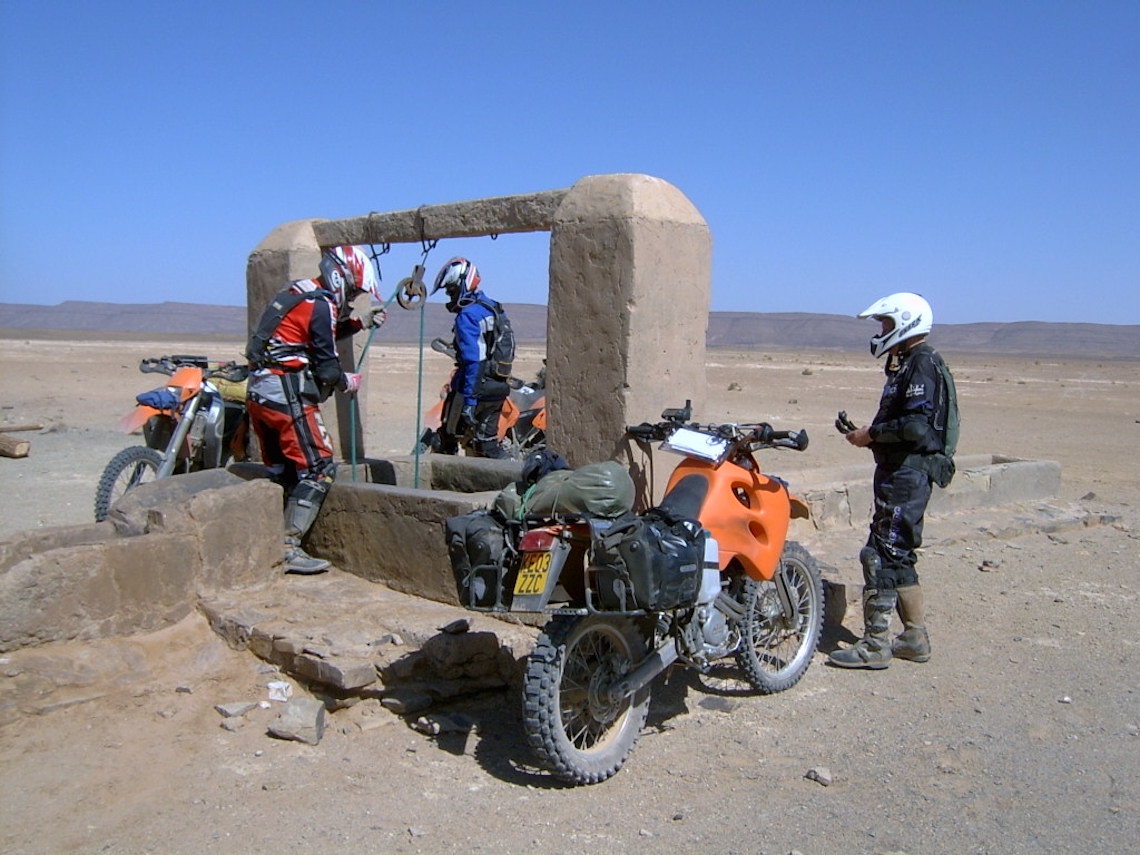 Milk is rarely pasteurised in developing countries, so it’s worth being a little careful. Some nasty diseases such as tuberculosis or brucellosis can be contracted from un-pasteurised milk. Bear in mind that traditional chai in India should be fine, because it’s made with boiling milk. There’s nothing more warming if you’re riding in the Himalaya – highly recommended!

In many parts of the world, the only water that is safe to drink is bottled drinking water. When buying bottled water, make sure that the bottle is sealed. There are some unscrupulous people out there who’ll refill bottles from the tap – or worse. If you want real independence, consider buying a proprietary ceramic water filter and a simple filter bag. The bag is used to filter out the worst of the sediment and mud found in stream water, before putting it through your expensive ceramic filter. This technique will extend the longevity of your pricey piece of kit and ensure it doesn’t become prematurely blocked. A positive side effect of using a filter is that you’ll drastically reduce the amount of litter which you’d otherwise produce by drinking bottled water.

Iodine tablets can be an effective way of making local water safe to drink, but unless ‘neutralised’ the taste can be unpleasant. Iodine tablets aren’t recommended for prolonged use either, so they’re not an ideal solution. If you don’t have a filter, tablets are light and easy to carry, however, so it’s worth sticking a tub of them in your luggage as a matter of course. Some single-celled parasites and bacteria protect themselves when in water by encasing themselves in a structure called a cyst. 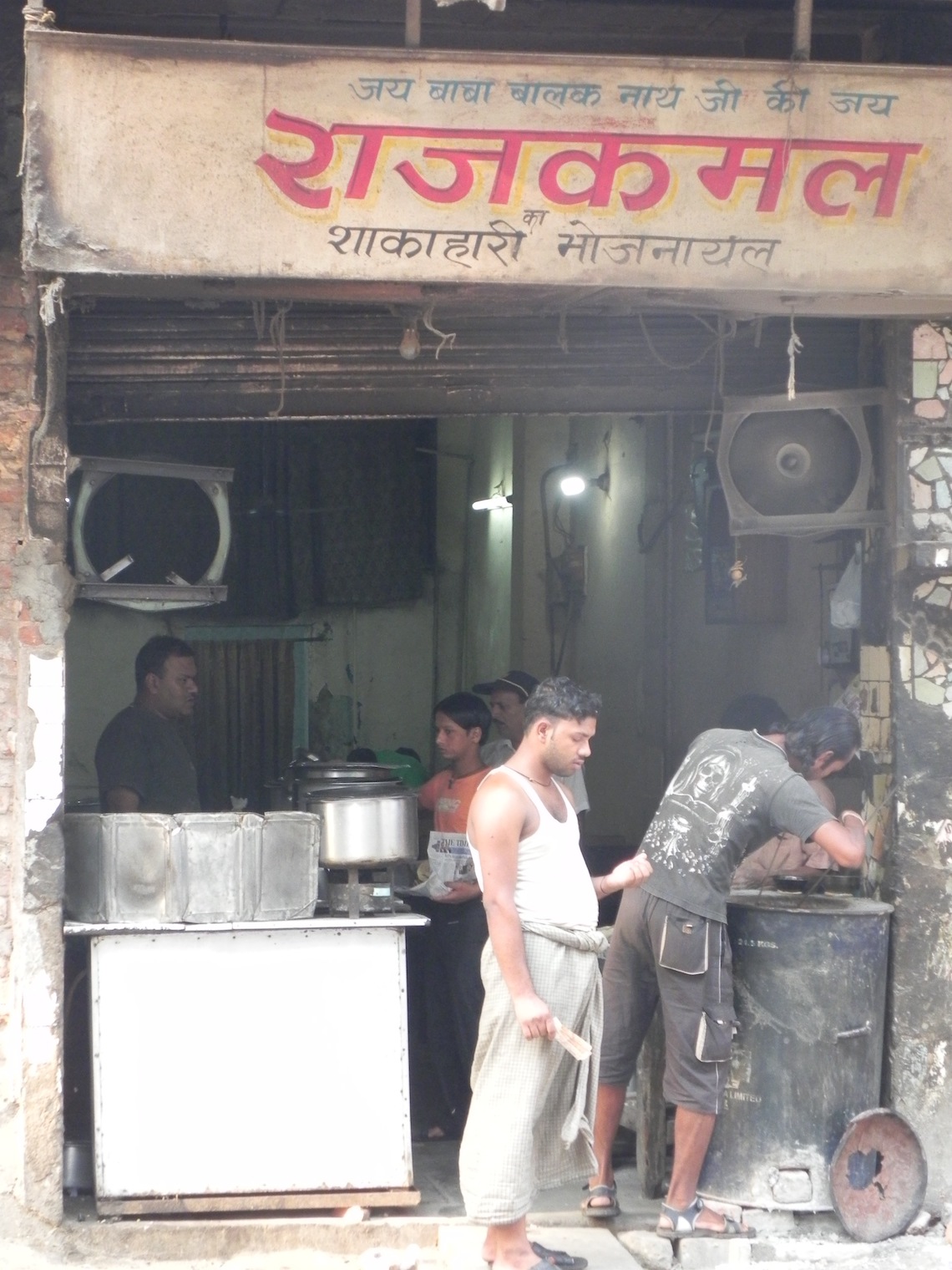 One thing to ensure is that any method of purification you use can kill or filter out such cysts. And don’t forget that ice is obviously made of water and will carry the same bugs – easy to forget after one too many drinks.

On the subject of drink, caution is needed when having a cold beer. In many countries, some pretty nasty preservatives are used, even in brands that are widely available in the UK. Put simply, the beer in the tropics, regardless of the label, is different to the beer you’ll drink at home because it’s often stored or transported in conditions that are far warmer than would be ideal. Glycerine and sulphur are common preservatives and after a couple of beers you may well feel perfectly sober, but next day will have the mother of all hangovers. The trick is to build up your tolerance slowly so that you know what effect the drink is likely to have on you.

Some local brews such as Goan cashew nut or coconut ‘Feni’ can be lethal – literally. When made carelessly, the drink can become contaminated with methanol (wood alcohol) rather than ethanol. Methanol is a deadly toxin and can blind or even kill you. Here you have two options: either forego the pleasure of drinking the local moonshine, or let someone else drink some first. The effects of methanol poisoning are rapid, and if the guy who went first doesn’t go blind, pass out or enter a coma within half an hour or so, you should be OK to drink it yourself!

I don’t want to be a killjoy or spoil your fun, but adventure motorcycling is much more enjoyable if you aren’t shitting your trousers three times a day, blinded my dodgy drink or infested with parasites! There’s no reason to become paranoid though. The trick is to follow these basic rules until they become habit, so you don’t even need to think about, let alone worry about them. This is particularly relevant when it comes to eating and drinking. Thinking about what you’re about to eat or drink, and washing your hands before meals might just save your trip from disaster. 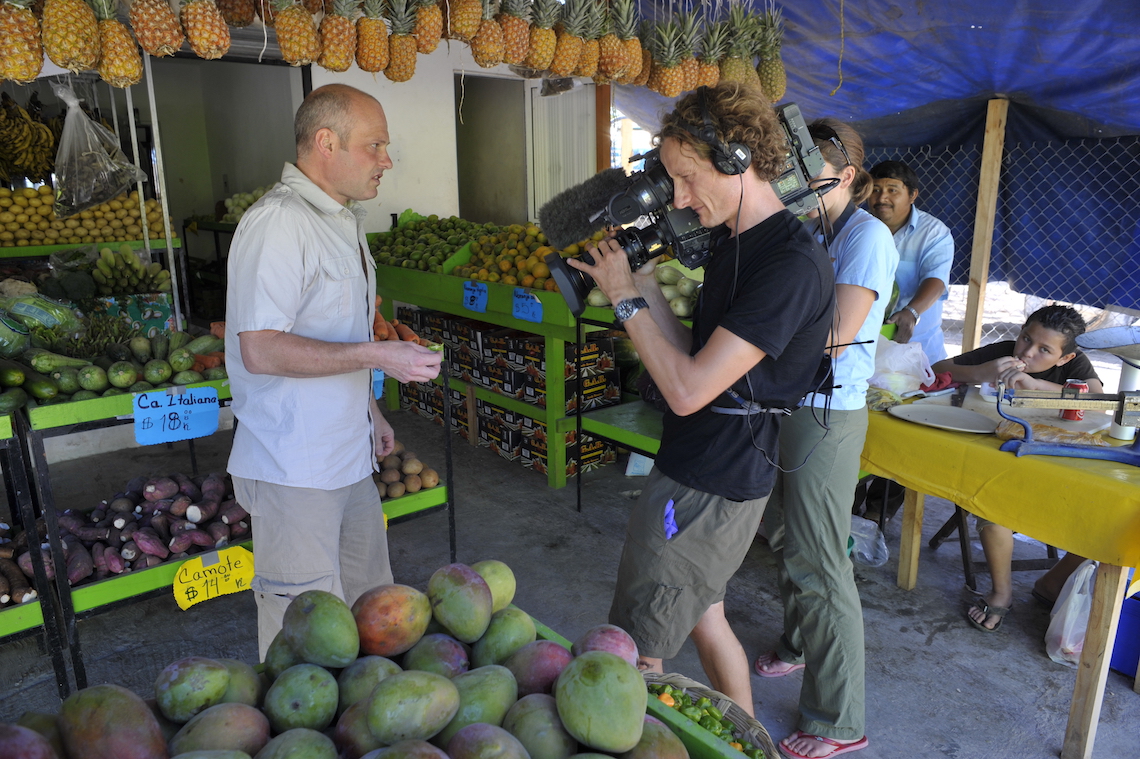 I love tapeworms, and have earned loads of money out of growing them in my guts for TV programmes, but they can be dangerous. The life cycle of tapeworms involves two phases: one in a carnivore and one in a herbivore. In this way the parasite never needs to exist outside a nice warm host for very long. In herbivores it exists as a cyst in the muscular tissue. Predictably this is the stage you may contract by eating undercooked meat, because most meat we eat is the flesh of herbivores like cows and sheep, and the cysts can be very small. The result is a large worm growing in your guts, which is inconvenient and unpleasant, but not life threatening. However, one way of contracting pork tapeworms is by ingesting tapeworm eggs which are excreted in the faeces of people carrying worms. The eggs don’t have to be in a turd to infect you though. Contaminated salad, water, hands or soil can easily do the trick. This is how the worm usually gets into a herbivore, and just as in a herbivore, if you are infected by his route the worm larvae will migrate through your body and form a cyst – sometimes in your brain. This is not a rare condition. Neurocysicercosis as it is called used to be the leading cause of premature deaths in Mexico. So if you want to avoid worms in your brain, practice good hygiene. 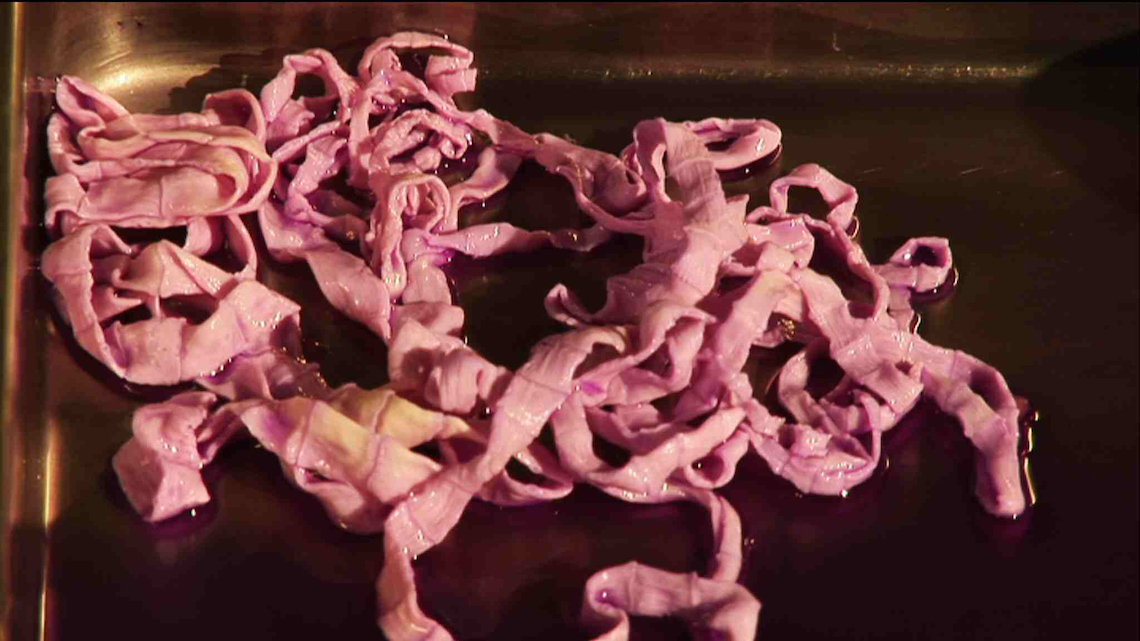 Adventure motorcyclist Mike Leahy is a virologist and TV presenter who’s passionate about foreign travel. His TV shows include Bite Me for National Geographic, LabRats for BBC3, and Bodysnatchers for BBC1. Mike likes to experiment on his own body. By deliberately infecting himself with nasty diseases, being bitten by dangerous animals, and growing parasites in his insides he hopes his firsthand experience will save other adventure motorcyclists from the same fate.