The ABR Motorcycle Guide to Combe Laval and the Vercors 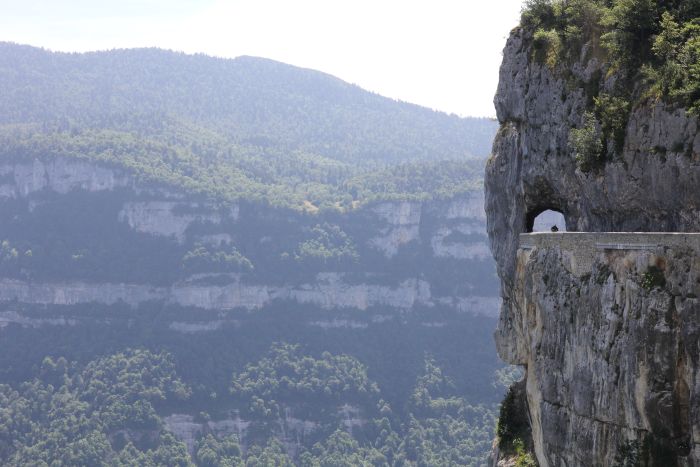 In the summer of 1944 the Free French government, based in London, had called upon the people of the Vercors, a series of high plateaus in the French Pre-Alps, to take up arms and tie down the German army before the allied invasion of Normandy. In a speech aired on the BBC, Charles de Gaulle pronounced the line “the chamois of the Alps leaps forth”, signalling 4,000 maquisards to begin the uprising. By the third of July the Free Republic of the Vercors was proclaimed.

Though the Republic was short lived (the uprising being crushed by the Germans in less than a month), standing in a lay-by on Combe Laval it’s easy to see why this area of France, which is also known as the Fortress, would be such a good place to base a resistance. Huge limestone cliffs, ranging from 800 to 2,000 metres in height, dominate the surroundings where small gorges have been cut out by the force of nature.

While the area would have provided tactical cover for the Vercors resistance of 1944, today it provides motorcyclists with some of the most spectacular roads on which you could ever hope to ride. Not only are you treated to exciting switchbacks and stunning views, but the adrenaline gets pumping as you ride balcony roads that have been cut out of the cliffside in a remarkable show of French engineering. 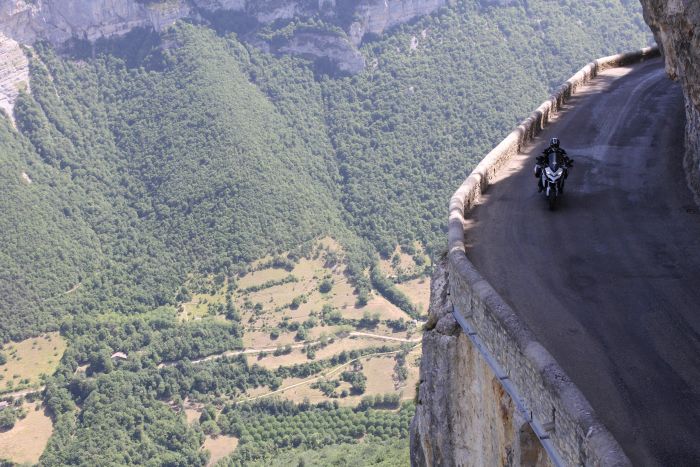 Approaching the area from the west is ideal if you want to get a sense of the dramatic nature of the high plateaus. As you ride on the A7, the huge cliff faces can be made out in the distance, growing larger and more imposing with every mile that you advance.

We based ourselves in Valence, not by choice but because we arrived late and with no accommodation booked, the Comfort Hotel was the only place that would give us a room and a cold beer.

While it’s certainly possible to spend two-three days playing in and exploring the many gorges and thrilling roads of the Vercors, there’s one that captured our imagination and was the reason for why we made the trip; Combe Laval.

Cut out from the limestone cliff face between 1861 and 1898, Combe Laval, also known as D76, offers a riding experience like no other in Europe. It is best to approach the route from Saint-Jean-en-Royans, where you take a fairly nondescript side road before you start climbing, a few tasty bends warming you up for what awaits.

The location of the magnificent Combe Laval in the Vercors. Grenoble is just to the north-east

As you get higher and higher you round a particularly nice right-hander which, on a clear day, affords you a view across the lowlands for miles and miles, but just a few hundred metres up the road the real fun begins.

The image that adorns the top of this page was taken from the viewpoint that you now ride past. From here on, if you have a fear of heights it’s best just to keep your head up and ride, though to do so would detract from the dramatic, exciting and electrifying ride through the limestone arches. 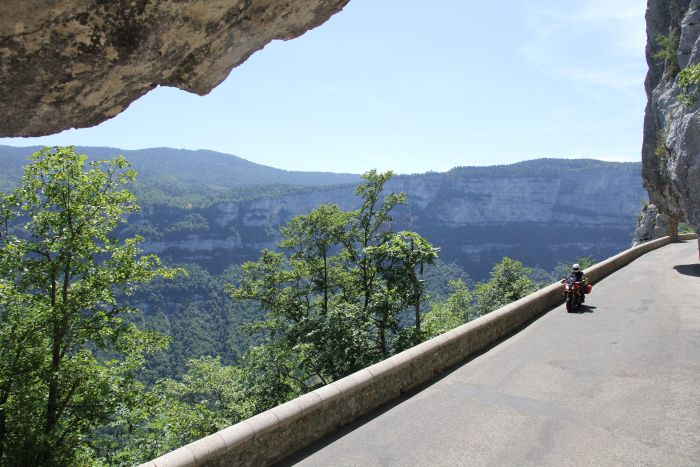 The road is narrow in its entirety, being wide enough for just one car in most places. Passing points allow some relief, though it’s always amusing to see the face of the driver that’s been forced to reverse, knowing that if by some strange turn of events he happens to smash through the six-inch thick wall he’s on a long, and I mean thousand-foot long, trip to the bottom of the Cirque de Combe Laval.

The road continues, passing through more arches cut out of the rock face, before you enter a series of tunnels that spit you out near the Hotel du Col de la Machine, a great place to stop for a drink and some food as you contemplate the craziness of the road you have just ridden.

From the top of Combe Laval no matter which way you ride you’ll be treated to fantastic roads, never before have I ridden in a place that offers so many brilliant stretches of tarmac, each and every one a joy to ride.

We took a right onto the D199, a smaller road that rises up and over the Col de Carri, smooth tarmac and numerous twists and turns await. At times it’s tempting to open the throttle, but as you round each bend you’re greeted by another limestone juggernaut and you can’t help but slow down and admire it. 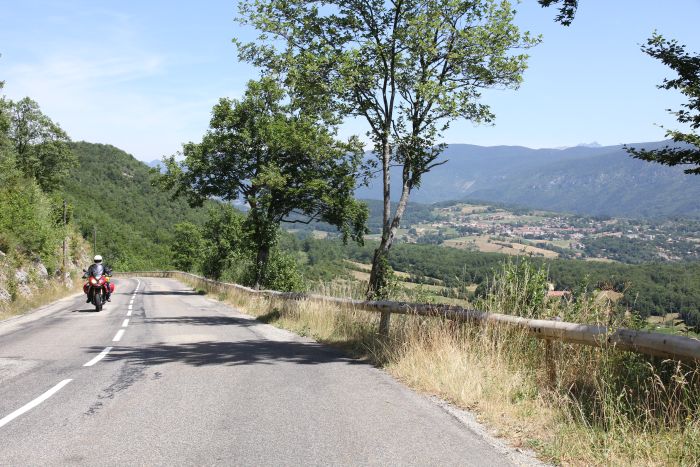 The D199 quickly joins the D178 and you enter the small village of La Chapelle-en-Vercors. Head west from the centre and ride the D518 which starts off gently with a series of easy sweeping bends allowing you to test your bike, and then enter the short mountain tunnel, Les Grands Goulet’s. Just before the entrance to the tunnel, you’ll notice a gated road, the Route des Grands Goulet’s, on your left.

Before the tunnel was built in 2008 the Route des Grands Goulet’s connected the Royans area with the rest of the Vercors, and similarly to Combe Laval, it provided a hair-raising experience as you ride on roads that have been carved out of high cliff tops. Unfortunately, it is now closed.

Upon exiting the Grands Goulet’s tunnel the road snakes its way down the valley, giant cliffs dominating each flank. The riding here is superb, the road well maintained and barely a car in sight.

After a short while, you’ll reach Pont-en-Royans, a small town that is built teetering on the edge of a gorge carved out by the Bourne river. As you stand on the bridge in the centre of the town you can look down the length of the gorge, the water below-looking tempting in the mid-day heat. 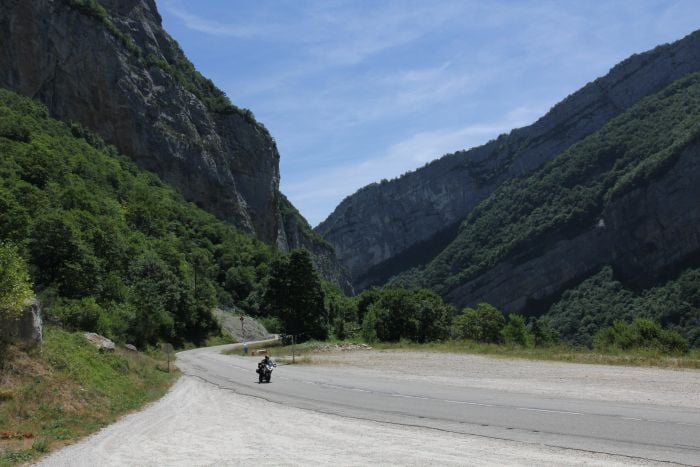 While we based ourselves in a Comfort Hotel a few miles out of the Vercors, after visiting Pont-en-Royans in the heart of the high plateaus we know where we’d stay next time.

A charming town in the heart of the Vercors flanked on every side by mountains, Pont-en-Royans is bisected by a steep gorge that has been carved out by the Bourne river.

Houses and hotels cling to the side of the sheer rock face while below crystal clear waters offer tempting respite from the heat. Take a trip to the water museum where a bar provides you with the chance to taste more than 900 bottled waters from all over the world. 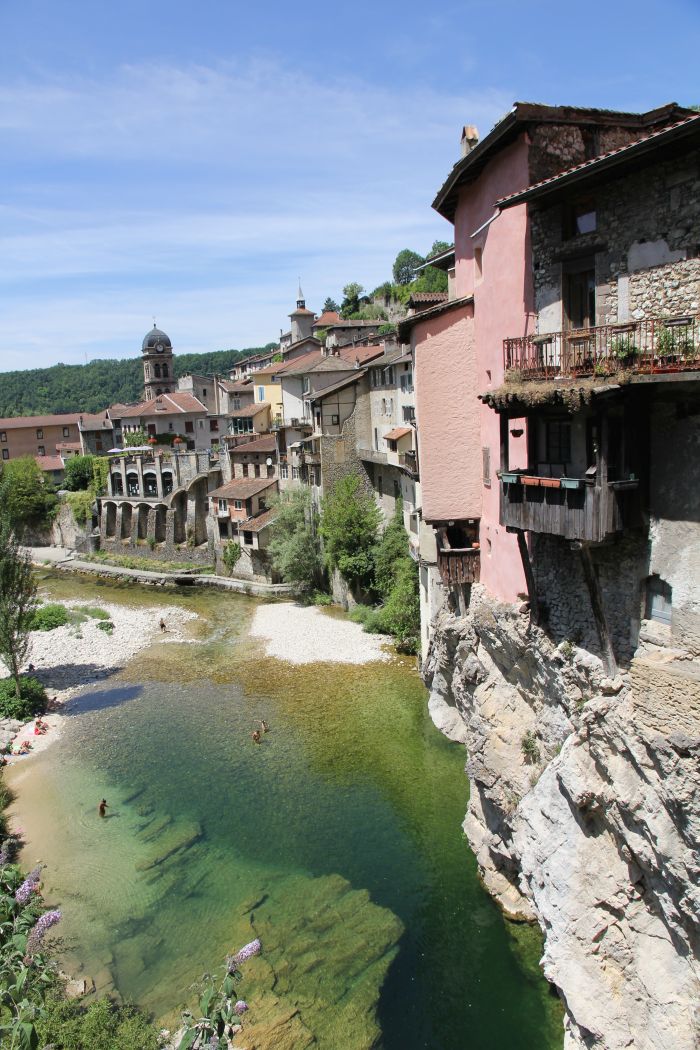 From Pont-en-Royans you really can head in any direction, and no matter which way you go there’ll be an exciting ride awaiting. Our journey took us northwest, exiting the Vercors at Saint-Romans over a beautiful single track road that served a handful of isolated villages.

We were only afforded a day in the Vercors, though I plan to return and spend a couple more exploring the many mountain roads and gorges through the dramatic and awe-inspiring plateaus.

If you’re planning a tour of Europe, make sure you include the Vercors, you won’t be disappointed.

Want to ride the Vercors? Here’s how you can…

To see and ride the best of the Vercors I would recommend at least two days in the area, with travel time being a full day in each direction (two days if you’d rather a more leisurely pace), then you’re going to have to book a full week off work. 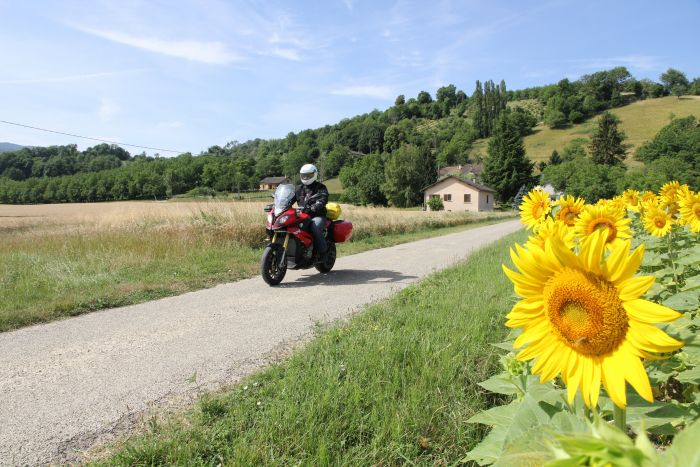 The best time to go is without a doubt the summer months. It can, of course, get a bit warm, though in the winter the roads are often covered by snow. We visited in July and the weather was perfect, clear blue skies afforded views for miles, and the hot temperatures meant that that cold beer at the end of the day was that much more rewarding.

While the rest of the Alps will be heaving with tourists in the summer holiday months, we found the Vercors to be quiet and peaceful while the roads were near empty.

How to get to the Vercors?

We planned to stop in the Vercors on a tour of Europe where we also visited Normandy, Annecy and Lake Constance before heading back to Calais to get the Channel Tunnel.

There are two ways of getting to the Vercors, you either get the ferry from Portsmouth/Dover to Le Havre/Calais and ride the 460(ish)-miles to Valence, or you fly to Nice, get your bike shipped over and enjoy a relatively short 230-mile ride through the Alps.

By approaching the Vercors from Nice you can make the journey far more interesting by riding Route Napoleon about halfway. Motofreight currently offers motorcycle transportation from the UK to France, with costs around £250, visit their website for more information.

Accommodation in the Vercors

If you want to stay in Pont-en-Royans then it’s certainly advisable to book in advance. We spent the best part of two hours phoning hotels before we finally found one with rooms, the Comfort Hotel in Valence. Campsites are plentiful.

The roads are spectacular but they’re accessible to most riders, providing you have confidence in the saddle. It can be quite unnerving to ride so close to a huge drop, but if you get your head around that you’ll be rewarded with some of the most exciting, picturesque and enjoyable roads going. 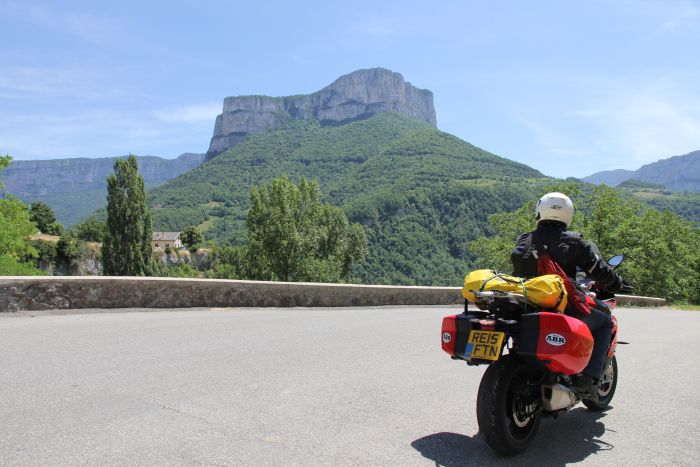