Riding in the Peak District on the new Honda MSX 125 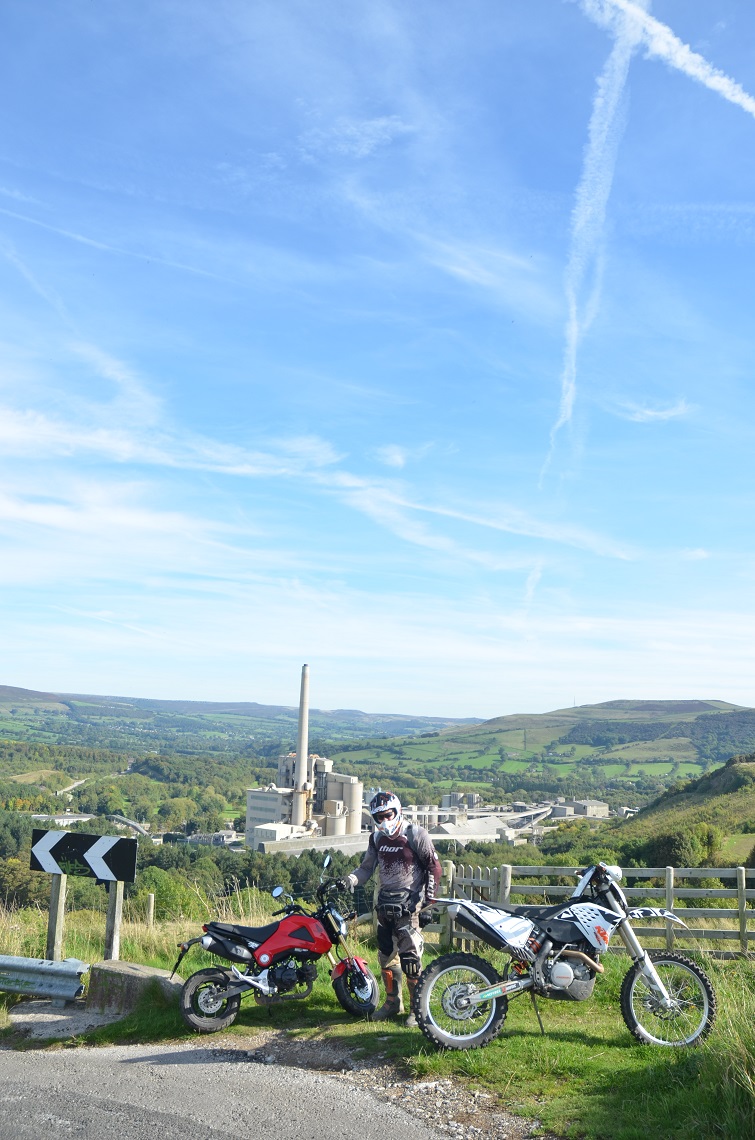 We go riding in the Peak District on the new Honda MSX 125. But for how much longer?

The MSX 125 – or the Grom as it’s called in America – is Honda’s attempt at resurrecting the Monkey Bike. It’s powered by a 9.6bhp engine, weighs 103kgs, can do around 65mph and costs £2,699. From the images, it’s clear to see the scale of it and in many ways, it’s not really a bike for us, but it was spotted at the Honda depot when returning the Crossrunner and we thought it would be fun to have it for a weekend. Little did I know at the time that it would end up being ridden along Stanage Edge in the Peak District, a route that really put those twelve-inch wheels and slick road tyres to the test.

I was riding with Neil Skirrow, a member of the TRF who, like me, simply wanted to make the most of the early October sunshine, the pair of us meeting in the pleasant little town of Calver, just to the north of Chatsworth House. Neil had trailered his KTM up from Loughborough, I’d ridden the MSX-125 up the M1 from Leamington Spa, tucking in behind a Cooperative lorry all the way to my junction and revelling in the bike’s nigh on 150 miles per gallon economy.

The bike is surprisingly comfortable on a long cruise, it actually feels like you’re on a proper bike, until you catch a glimpse of your reflection in a shop window and it looks like you’re riding a mini-moto.

Rather than Japan, this bike – like many other budget bikes these days – is built in Thailand, with a slight disappointment to the perceived quality of the bike and its components. I’m used to older Hondas, which feel solid and over-engineered. In places, the MSX feels a little better built than a Chinese bike and at this price that’s a little more diﬃcult to excuse.

Clearly, the point of interest here is the bike’s novelty and ability to appeal to a younger demographic of motorcycle riders who perhaps won’t care how solidly the brackets are engineered. But still, it makes you wonder just what are going to be the classic bikes of the future if they don’t build the current generation to last.

We started the day with a steep narrow trail through a canopy of trees. The back wheel was spinning and spinning, the key being to keep up the momentum because the moment you lost it, the back wheel would spin up and not stop spinning until you shut down the throttle. I’ve since investigated grippier tyres in this size, discovering that Continental has just launched a range of winter tyres for scooters that should give an extra bit of grip.

Further on, we reached flatter, more open lanes and bridleways, where to be fair the MSX soon became a whole lot of fun, skipping and skimming across the terrain and perfectly powered for it. Joking aside, a bike like this is a great way for the novice to learn the way a bike reacts on loose ground, to get used to the way a bike will move around beneath you and certainly help you get into the habit of looking ahead in order to plan a route. You have to on this bike, even small rocks can suffice as an obstacle.

Following Neil’s pre-marked route on his Ordnance Survey map, we joined ramblers, cyclists, horse riders and dog walkers on the public bridal ways across the moors.

With Sheffield off in the distance, it was interesting to read the reaction of the other trail users that day. It was clear that many didn’t like us being there. Nothing was said but you just got the sense that a large chunk of the people out that day would rather us not have been there. Neil explained how there is currently a campaign called ‘Take Back the Tracks’, led by a group calling themselves ‘Friends of the Peak District’, who are actively trying to close the very lanes we were riding on.

The sinister part about it is that one of the members of the campaign group is also chairman of the Audit Resources and Performance Committee, the body which will ultimately decide the fate of the Peak District for motorised vehicle usage. An inside man so to speak. And such activity isn’t just limited to the Peak District, it’s happening all over the country. What we are possibly witnessing then is the twilight years of green-laning in the UK, something that the TRF is trying desperately to stop.

Laying down allegiances for a moment, on this day in the Peak District I could well understand why some people don’t want us there. We are a tiny minority making all the noise and disturbing the peace of the majority. But then we have equal rights to be there as well. So what is the solution?

Riding the MSX added a certain dimension – albeit a small one – to this debate, and if we can play devil’s advocate for a moment, what if the problem isn’t with motorcycling per se, but with the type of motorcycles we ride? Neil’s KTM is noisy, it cuts up the terrain and leaves marks on the trail. The MSX does none of those things. It leaves little trace and makes little noise. It is less intrusive on the environment through which we ride. But at the same time, why should we alter the type of bikes we ride to suit other trail users, that’s if they could be placated by a swap of bikes at all. It just seems that something different has to be done because at the minute there seems to be a certain inevitability about the plans to ban us from succeeding. Would it matter if they did?

On this beautiful day, we counted six other off-road riders. All the others were doing something else with their day. Perhaps if we want to keep them open we have to start using them or making the most of them whilst we still can. There’s no point complaining that they’re gone if you never used them in the first place.

Clearly, this is just the tip of the iceberg. The issue goes much deeper and further than the Peak District, or an article originally about the MSX. If, in the meantime, you are concerned about the future of green-laning in the UK, be sure to join the TRF.

What is the TRF?

The Trail Riders Fellowship is the national organisation for motorcyclists who enjoy exploring the countryside in England and Wales, using the historic network of unsurfaced roads and vehicular rights of way. Activity is centred on the TRF’s network of over 40 regional groups dotted around the country.

Over the past 40 years, the TRF has been instrumental in keeping Britain’s green roads open and in good repair. The TRF can show you possible routes to be ridden all over England and Wales, regardless of whether you want a quick afternoon ride or a more extended coast-to-coast.

The TRF welcomes members on all kinds of bikes, providing they are quiet, road-legal and ridden responsibly. Many TRF members run large adventure bikes. Many of the lanes ridden are suitable for large adventure bikes, particularly if appropriate tyres are fitted. If you are not an experienced ‘dirt’ rider, the TRF suggests that you make your first few excursions in dry conditions and on easier lanes. Your local group will be able to advise you.

The TRF annual subscription is only £40 a year, with no joining fee. You also get a free monthly magazine (by post or downloadable), and full access to all areas of this website and forum.

■ How versatile is the MSX-125?
There aren’t many bikes that can ride Stanage Edge and then do the M1 back down to London.

■ As a commuter?
Ideal. Small enough to slip through traffic, easy to park and great on fuel.

■ As a weekend tourer?
Not so good, with storage being the main issue. Range is okay though, so if you have somewhere to head to it wouldn’t be so bad.

■ As an off-roader?
Better fun than most, and with the right tyres on could be a hoot on less rocky terrain.

■ As a Continental road cruiser?
More a sufferance than a joy.

■ As an RTW overlander?
People have gone around the world on smaller bikes, but would the MSX stand up to it? I’m not so sure.

■ As a pillion carrier?
There are pillion pegs, which sadly went untested. It’d be a squeeze, but probably a good laugh trying.