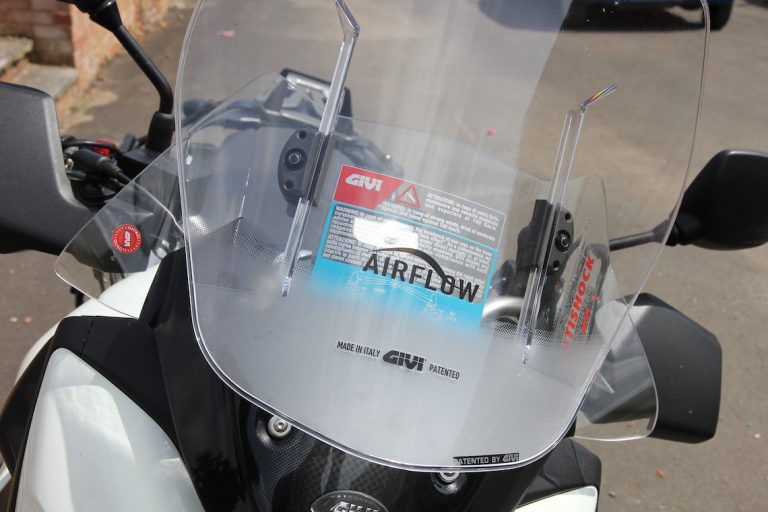 £130 a small price to pay for increased comfort

Suffering from buffeting, Alun Davies fits a taller screen to his V-Strom 650. But does it cure the problem?

I’m of an age and disposition where a bucket, cold water and a sponge cures all, including the most complex surgical procedures. Strange then, that I find myself studying back issues of the Lancet whilst researching a feature about modifying a motorcycle.

It’s pretty obvious that a pandemic has been raging around the globe for the past 40 years and I’m searching for a name for this curse. It’s a virus that attacks the cerebral cortex of motorcycle screen designers rendering them incapable of engineering a piece of plastic into an effective wind protector. Evil, indeed.

Stock screen (Above Left) is a common cause for complaint on the V-Strom 650. The Givi Airflow screen (Above Right) was easy to fit, and also easy to adjust, though it does take both hands to do so.

The worst effects of this sickness do not affect the host but strike the majority of bike riders in the form of hurricane-force turbulence, thunderous wind noise and headbanging vibrations. Readers with a medical background will know that I speak of ‘Crapus Screenus’, of which I have become a serial sufferer and not even the largest of buckets, coldest of waters or most absorptive of sponges can alleviate.

Now, I’m all for the ‘wind in your hair’ concept of biking but I find that eyeball rattling turbulence can put a damper on even the best knees in the breeze experience, so, an after-market screen is usually top of my shopping list. In short, the majority of OEM motorcycle windscreens are designed for their visual and sales appeal in the showroom rather than for the comfort level of the rider.

On a scale of 1 to 10; where 1 equals behind the screen bliss and 10 represents having your eyeballs sucked out by a tempest, the Suzuki V-Strom 650 is about a 5, which means the designer is probably taking his tablets but needs to up the dose. That said it would be unfair to single out the V-Strom 650 as an inducer of tornadoes because there are far, far worse out there, the old Triumph Tiger 955i being one that thunders, literally, to mind.

Anyway, I’d been told that the cure-all for the 650 Strom was the aftermarket Givi Airflow. The Givi is taller and wider than the original Suzuki screen and comes in two sections (the stock screen is a single slab of plastic) and has a sliding height adjustment of just over 6in. And the best thing about fitting this new screen is that even a reluctant bodger like myself can have the old one off and the new bit of plastic in situ within two minutes. 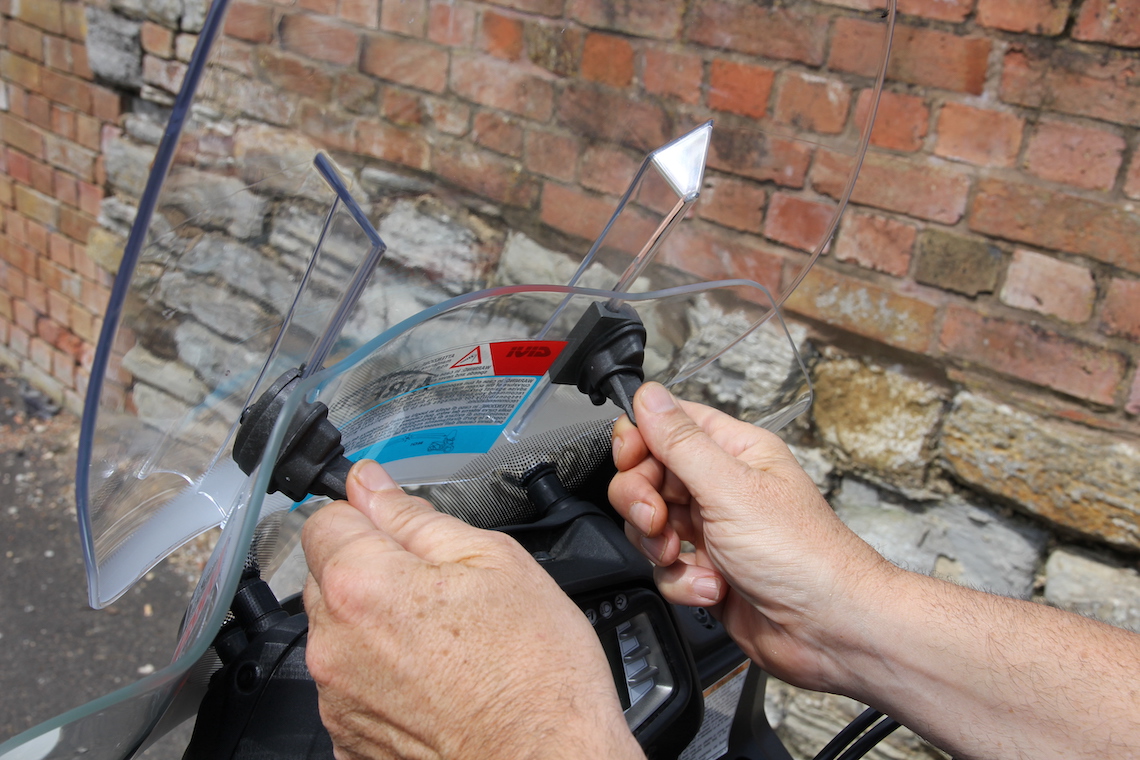 The fixing kit comes with a couple of half-inch spacers which raises the Givi off the bike. This gap, along with the space between the dual screens, directs airflow to the area immediately behind the screen. This is important, as it’s the low-pressure bubble created behind a non vented screen that’s one of the main causes of excessive noise and turbulence. Air directed into this space fills what would otherwise be a vacuum and reduces the occurrence of Von Karman Vortices.

The Givi slots straight into any of these positions, which coupled with the adjustment range of the screen itself offers the rider a huge range of potential heights.

Take it from someone who’s squandered plenty over the years on aftermarket screens with no adjustment this is a major benefit and every shape and size of the rider should find a position where comfort is acceptable.

With the Airflow attached to the highest fixing points on the bike I hit the road with the screen set at its lowest position and was rewarded with an instant improvement over the stock shield. Cruising at 70mph was a pleasure with reduced wind noise and little to no turbulence. The highest setting impaired my vision (I’m 6ft 2in) however bliss was found when I lowered the screen to about 2/3 height where wind noise almost disappeared, turbulence was non-existent and visor-up riding a pleasure. Plus, there was a pleasant flow of cooling air at around chest height, just the job for the warmest day of the year so far.

The screen fits the 650 Strom perfectly and does not interfere with the handguards or mirrors, even on full lock. Style-wise it’s not the grotesque-looking carbuncle that some aftermarket screens can resemble, but it’s no sleek glamour model either.

The sliding adjustment mechanism on the Givi Airflow is simple to operate, but not one you’d be advised to do whilst riding. Another feature which I like is that it is safe to ride with the upper screen removed completely. This will appeal to riders who’ll only want to use the second screen for touring. They’re not cheap – web prices are around £130, but they can transform the level of riding comfort and are custom made for most adventure bikes.