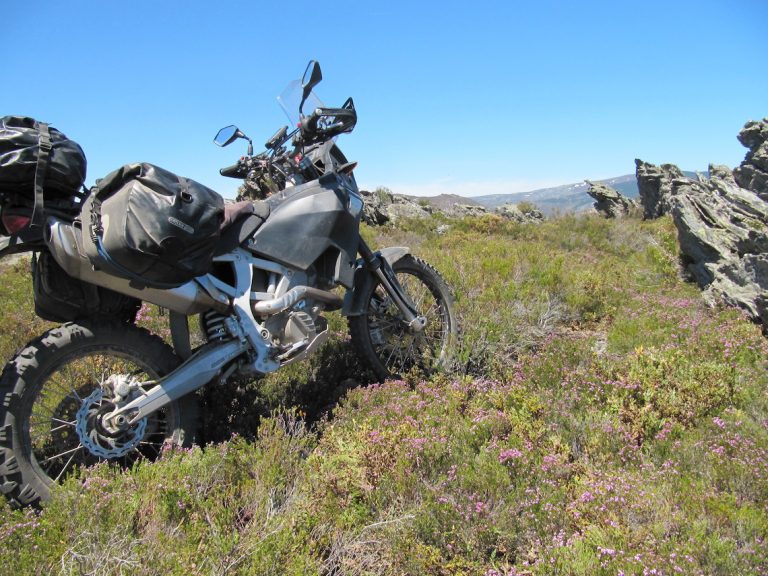 We’re still waiting for the production bike, but in the meantime forum member Minkyhead has taken one of the pre-production prototypes over to Portugal for some off-road riding. Here’s how he got on…

The ride down to the ferry was pretty uneventful, with a total of 272 miles to get there. I was running consistently in the low 70s by choice, with the odd excursion to 80mph to buy some space. The engine doesn’t seem to mind this kind of running and is nowhere near the top of its range.

Some of the CCM guys have seen 97mph, but not for me. With the Unicross front tyre p-rated I’m quite content at a steady 74mph. The speedo on the CCM is extremely accurate and if it says it’s doing 70 it is in fact doing 70, verified by my sat nav. On the motorways, the fuel light came on around 176 miles and she was doing around 53mpg. Overall consumption for the trip was near to 60mpg.

I fitted my airhawk seat for the longer trip, having no trouble at all with the general seating position or leg room. It’s no GS, but 12 hours in the saddle is no big problem at all. For the trip, CCM had fitted the adjustable high screen as I ride open face all the time. This proved extremely effective; it worked very well and I liked it a lot. High-speed stability was generally good but not as good as when fitted with the Michelin T63s. I put this down mostly to the Unicross knobblies fitted to the front (my choice).

The side stand had the spring-loaded bolt removed and worked in the conventional way. It was no problem when you educate your foot; finding it the first time, every time. The stand is a good angle and I used it all the time to mount the bike via the footpeg. The ferry people were brutal with the tie downs on the LD line and the sides and seemed pretty robust. No problems.

The fitting of my trusty Ortlieb luggage took quite a while as I had to adapt the CCM racks a little without altering them. I eventually did get them to secure to the racks and was carrying over 20kgs total weight. The racks can easily be adapted for different shapes and sizes but proved very good on and off-road during the trip. The rear preload was wound up about 10 threads to take care of the extra weight.

On the road, I could outrun Russ’s KTM644 on guts and you have to go some to overtake the CCM in a bend. I let a Triumph Sprint go past on a twisty road and annoyed the hell out of him for three or four miles until a long straight appeared, when he duly buggered off. Fun while it lasted.

Get it on cam and give it a bit of stick and it’s very good fun, although on steep down-hills it’s difficult to get a smooth drive from pick-up. I ended up slipping the clutch and trailing the rear brake. This is a niggle, but it only annoys on those long descents with loads of twists.

It’s a bit vibey on the uptake from 35mph in 4th, but soon smooths out and pulls clean. It’s not short of guts, though there is a noticeable gap between third and fourth, so fourth was the gear of choice for all but the steepest parts on the mountains. 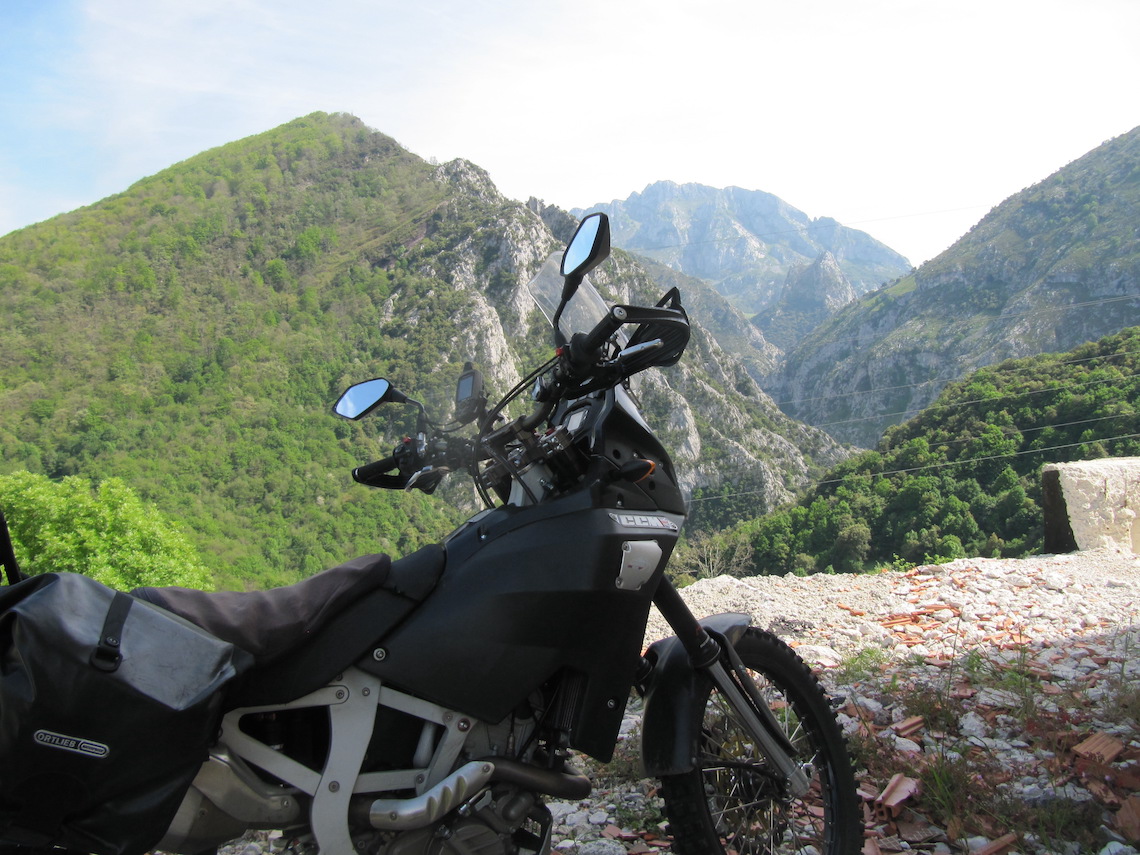 On the trails we covered quite a mixed bag of terrain, and as you may expect the bike was very good. The rear suspension coped extremely well with the weight of the luggage. I was chugging along here and there and hit long rain-ruts and general trail stuff pretty fast. The bike tracks very well. I couldn’t detect any deflection and the chassis and suspension just ate up the bumps and cambers. No way would I dare to ride this fast on my Yam XT660.

It’s probably a less plush ride than the XT or KLR going slow as it’s set a little harder, but increase the pace and where the XT uses up its suspension tokens the CCM remains poised on fast trails. The pegs, handlebars and tank design are pure dirtbike when standing. The faster I went the smother it seemed to get. I got a bit of air on a few occasions which, believe me, is not usually my style at all.

I rode a bit of rocky stuff and several very steep climbs. The suspension just helps so much and the drive is so linear. You can get right up over the handlebars, leave it with a steady throttle and it just tracks, grips and climbs impressively well. Even going over some big deflections it just drove up. The other thing I’d say is that because it’s so light I wasn’t so concerned if I lost my way shall we say!

When I did get in trouble I could turn the CCM around on my knee with full luggage fitted; bliss. The CCM generally went in front 100 meters to check out the terrain, with the guys on the other bikes following behind. The bike was manageable in real awkward spots, and in this sort of terrain, it is difficult to fault.

After six days I really have very little to fault the bike. I honestly can’t think of anywhere the bike put a foot wrong in the off-road tracks and trails of Portugal. I rode fast, rugged, rocky and steep terrain and the bike was a pleasure to be on. Back on the road, it has its thumper ways. It’s not a tourer per se, but it’s comfy, willing, gutsy and competent. Maybe a bit crude at lower revs, but I assure you it’s anything but boring. It delivered a spirited ride and was better than you could reasonably expect for a bike of this type; surprisingly able at motorway speeds.

How did the bike hold up during the 1,700-mile ride? It lost an 8 ml sub-chassis bolt, which I replaced from the tool kit. A luggage rack bolt, the rear wheel bearing had signs of wear on the return and needs replacing, it didn’t however use any oil during the trip. The fuel cap showed some seepage when the fuel tank was filled full on steep hills off-road.

I got a ding in the bottom of the radiator; a tiny pinprick leaking out coolant on the last morning on the trail. I dried the radiator with an air hose and sealed it with liquid steel from the tool kit and refilled her and that was that it; sealing fine for the duration. The dash has no warning light or temperature gauge, so in that respect, we were lucky to have spotted the leak. But all’s well that ends well. Apart from this, the bike ran the whole trip without a single fault.

Once home I checked the bike over and the only real fault I found was the worn rear wheel bearing. The guys at CCM said they were guilty of over power-washing the bike after each customer ride and I don’t consider it a problem.