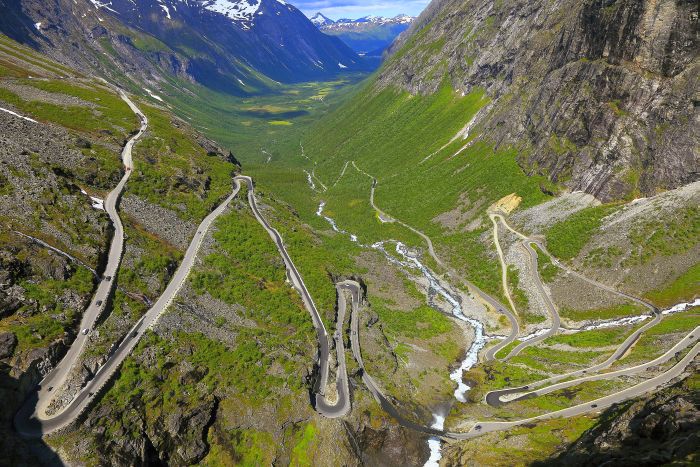 Throughout the next year we’re going to be showcasing some of the greatest riding routes throughout Europe, as featured on the TomTom Rider 410 Great Rides edition. These 100 routes come pre-loaded on the SatNav, though we’re going to be breaking them down into chunks of 10, we’ll also be showcasing our favourite ride in each area in greater detail.

Plus, we’re going to be offering you the chance to get your favourite route featured in an issue of Adventure Bike Rider magazine, as well as have it pre-installed on the TomTom Rider. And, to top it all off (as if that wasn’t enough) there’s also the chance to WIN a TomTom Rider 410 Great Rides edition. All you have to do is email [email protected] and tell us what your favourite European ride is, and why.

We’re going to be compiling the best answers throughout the year, and in 2017’s November/December issue we’ll feature 20 of our favourite user submitted rides.

So, to kick us off, in the latest issue of ABR we started with Scandinavia focusing on the exciting Fjordland ride through Norway,.

While the Alps in Central Europe act like a magnet to bikers looking for great roads and epic scenery, the fjords in western Norway sit quietly, waiting to be discovered. This route, aptly named Fjordland, will take you from Oslo on an epic circuit which allows you to explore the stunning Western Norwegian Fjords and the magnificent roads that are carved into the rugged landscape.

At approximately 1,000 miles long, you’ll need to allow plenty of time to complete it (especially when you factor in the travel to and from Oslo), but if you do book the time off work, you’re in for one heck of a ride. This area of Norway is world famous for its natural beauty, and there’s not a bad road you can take.

As you leave Oslo, the further west you go the more dramatic the scenery becomes. Travelling through the county of Telemark affords you the views of the gentle valleys and vast forests, which begin to prepare you for the mighty fjords.

Skirting the boundary of Hardangervidda National Park, Norway’s largest such area, you begin to ride up the amazing west coast of the country. Along the way you’ll travel through the Laerdal Tunnel, the longest road tunnel in the world, which burrows through the mountainous landscape for 15.23 miles, before you reach Sognefjorden, Norway’s largest fjord, and the second largest in the world.

For hundreds of miles the scenery will blow you away, and all I could think of was ‘this is exactly what Scotland would look like if it had abused steroids’. Our journey peaks in the characterful city of Trondheim before following close to the border with Sweden in a southerly direction, finally ending in Oslo.

While the proposed route has an uncountable number of great roads, there are two that we recommend you venture off course for: the infamous Trollstigen and the Atlantic Ocean Road. Consider the Trollstigen Norway’s answer to the Stelvio Pass, while the AOR is a magnificent coastal road with epic bridges.

Don’t forget – we’re offering our readers the chance to get their routes featured in ABR magazine, as well as a FREE TomTom Rider 410 Great Rides edition SatNav, simply tell us what your favourite European Route is, and why. Send entries to [email protected]