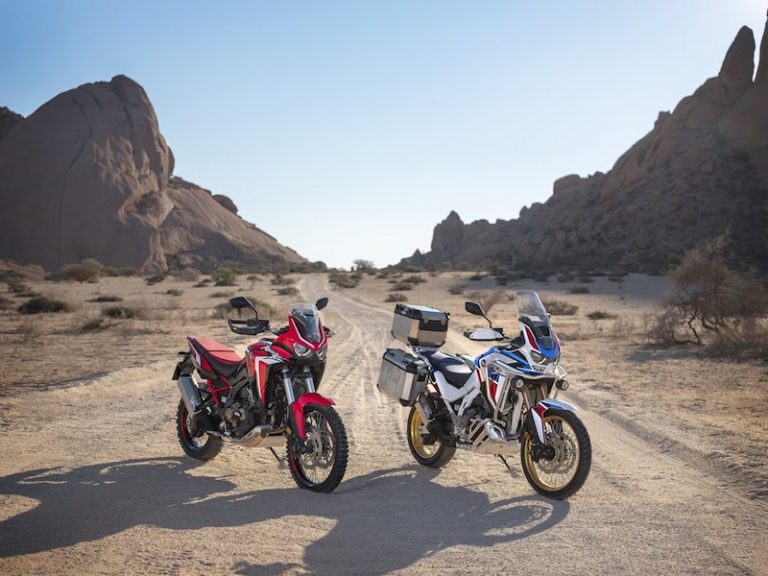 Following the announcement that a new Honda Africa Twin will be released in 2020, James Oxley looks at what we can expect from the latest incarnation of the big-selling adventure bike.

Africa Twin is a moniker that has rightfully earned its place in motorcycling folklore.

The original XRV650 was inspired by Honda’s Dakar-winning motorcycles and carved out a reputation as a globe conquering machine. It became a firm favourite with motorcycle travellers thanks to its capability and reliability as a long-distance tourer. That was until it was discontinued in 2003.

So, in 2016, it was no surprise that Honda chose to revive the Africa Twin brand when it launched a new adventure bike to take on the likes of the mighty BMW R 1200 GS. The result was the CRF1000L, a brand-new machine from the wheels up. 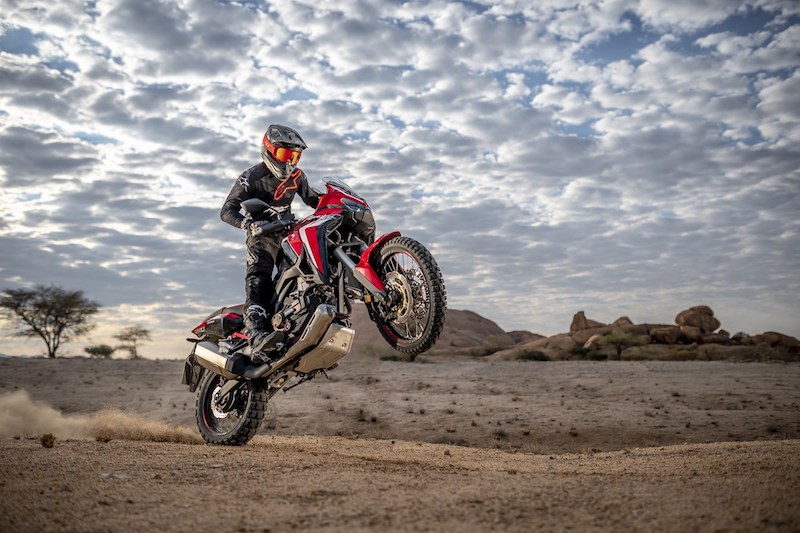 It was a bold move, and one not without risks. That distinctive Africa Twin logo placed on any new motorcycle was certain to make expectations soar. It had to be good, very good. In short, Honda nailed it, producing a superb machine that was as comfortable tackling desert piste as it was continental road touring, or commuting in busy city streets.

Admittedly, not everyone was satisfied, as is the case with the launch of any new bike. There were grumbles from some quarters that the new Africa Twin wasn’t off-road focused enough, being too big, heavy, and featuring suspension that would bottom out if pushed it too hard.

Perversely, some people complained it wasn’t road-focused enough, with less weather protection than its rivals and too much suspension travel, leading to vague steering in combination with that 21-inch front wheel. 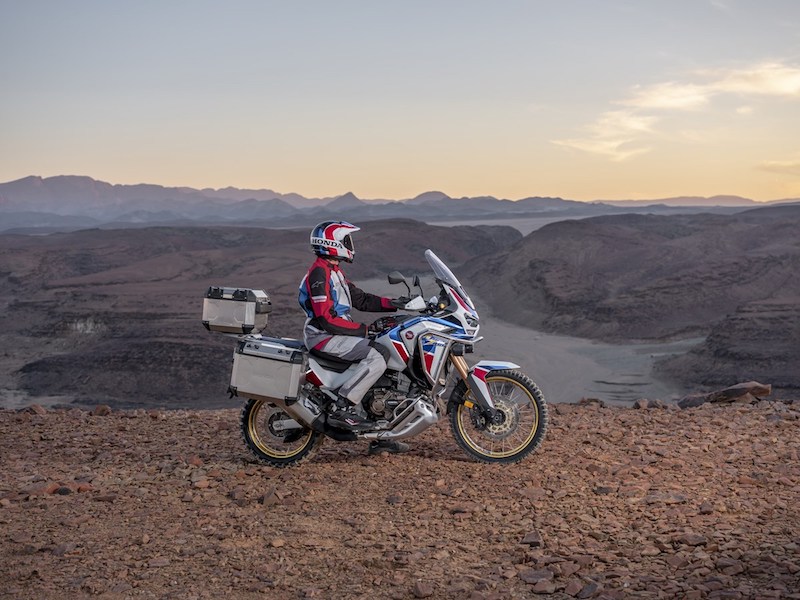 However, no bike is perfect and Honda didn’t set out to design a dedicated dirt bike, just as it didn’t funnel its research and development yen into the ultimate adventure tourer. Instead, the design concept for the Africa Twin was ‘go anywhere’.

It produced a superb do-it-all bike, one that is just as happy blasting across France and scratching around the Alps as it is tackling sections of the Trans Euro Trail, or one of the USA’s Back Country Discovery Routes.

It’s a machine that may not be the best at anything but aims to be the best at doing everything. The ultimate adventure bike you might say, although there’ll be plenty of BMW and KTM owners ready to shoot down that rather bold claim. 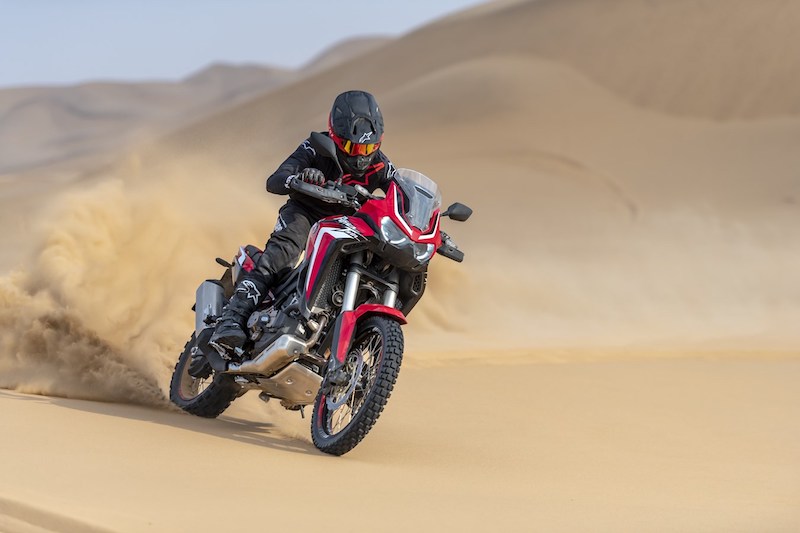 The CRF1000L Africa Twin proved a hit for Honda, and it was followed up in 2017 with the unveiling of the beefier Adventure Sports version. This featured a bigger fuel tank, more ground clearance, a higher touring screen and more suspension travel, addressing some of the concerns raised by the original CRF1000L’s detractors. It also looked a million dollars.

Both versions of the Africa Twin enabled Honda to make a big splash in the adventure bike world, selling 87,000 bikes between them and gaining a strong foothold in what is a fiercely competitive market. However, in the past couple of years the competition has hit back, with a slew of new and improved bikes vying for your hard-earned cash. 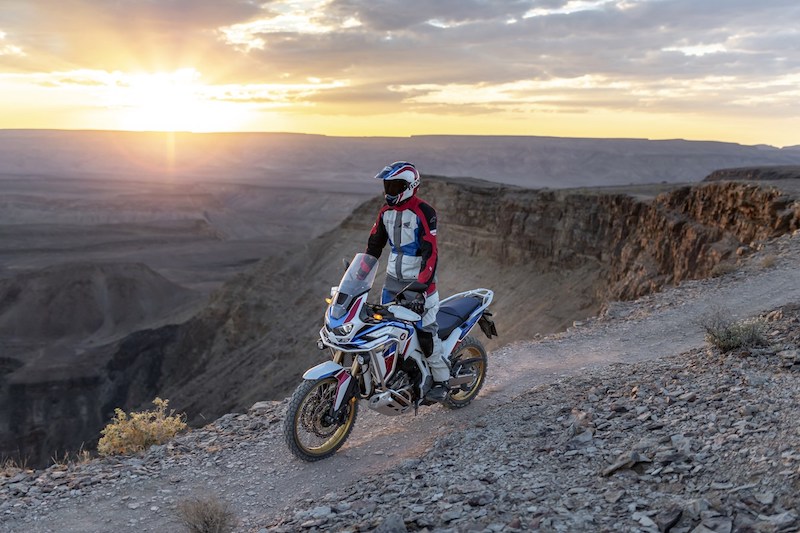 The likes of the KTM 790 Adventure and the Yamaha Ténéré 700 have raised the bar in the mid-sized segment, while machines like the new BMW R 1250 GS and its Adventure variant, as well as the Ducati 1260 Enduro, have packed big adventure bikes with more power, more technology and more refinement than ever before.

In short, the ‘new’ Africa Twin models were in danger of getting left behind already. Honda of course was fully aware of this (it’s not the world’s best-selling motorcycle manufacturer for nothing), and has announced the launch of new Africa Twin and Africa Twin Adventure Sports models in 2020. 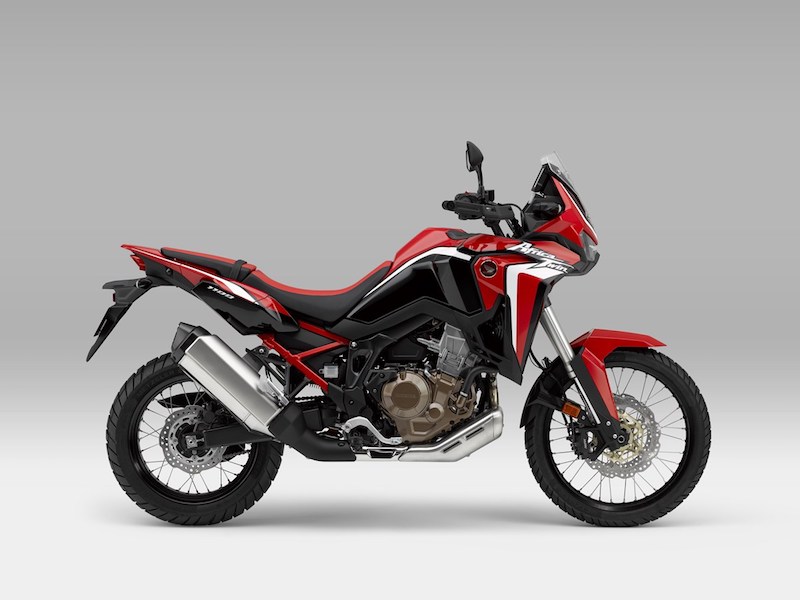 The bikes are due to be unveiled to the public for the first time at the EICMA motorcycle show in Milan this November. Both machines will feature a raft of upgrades, including an increase in engine size and power, and all the signs are pointing towards significant improvements to what were already extremely capable motorcycles.

So, without further ado, this is what you can expect from the latest incarnation of the Honda Africa Twin in 2020 (we’ll take a look at the updates to the Adventure Sports in a separate story). 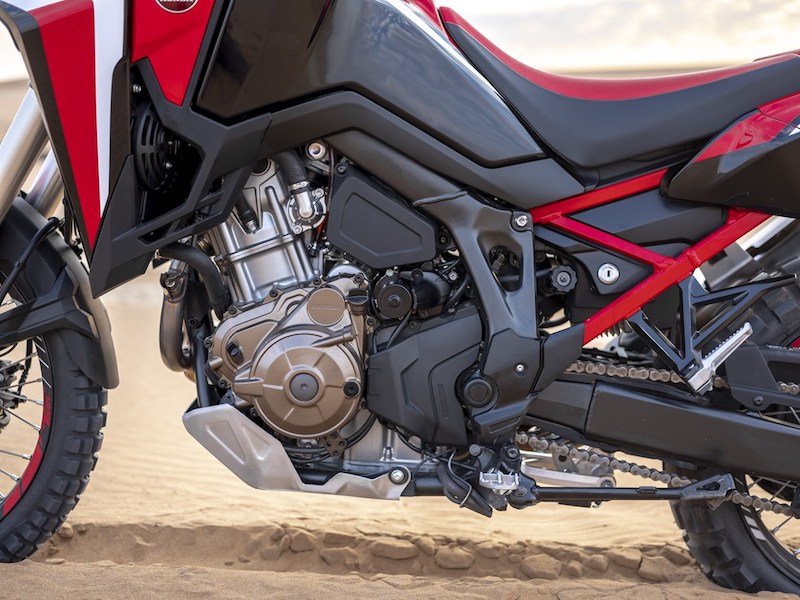 This small hike in power will in part be to cater to new Euro 5 emission standards that come into force in 2020. By increasing the engine capacity of the Africa Twin, Honda can off-set any power loss caused by the new restrictions.

With this in mind, the changes to the engine represent an evolution not a revolution. The Africa Twin’s parallel twin is a peach of a powerplant, offering smooth power delivery and plenty of torque, though it’s no secret that the CRF1000L lacked a bit of oomph – there was enough power there, but it wasn’t the most exciting.

There are four rider modes, with the previously available urban, tour, and gravel settings being joined by a new off-road mode. 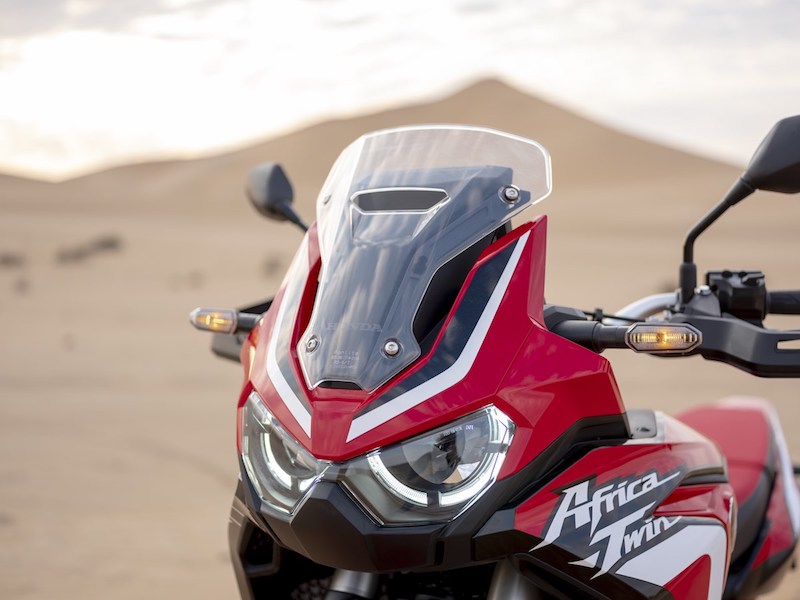 Honda says the new CRF1000L has a ‘sharply renewed focus on off-road core ability’. It’s design and styling are slimmer, more compact, and more aggressive than ever before, including a shorter fixed screen designed for off-road riding.

It seems clear that the previous model’s all-rounder credentials on and off-road may well have been sacrificed to give the standard model Africa Twin better performance in the dirt. Is this the right approach for a bike that has proved a popular road tourer? Only time will tell, but strong sales this year of the off-road focused KTM 790 Adventure R and the Yamaha Ténéré 700 suggest Honda are onto something.

The tail of the bike has been made slimmer along with the seat which is 40mm narrower. The shape of the seat has also been redesigned to make it easier to mover around on the bike, a feature usually found in more off-road focused motorcycles.

There is also a change to the height of the handlebars which have been raised 22.5mm to give a more upright riding position while standing. 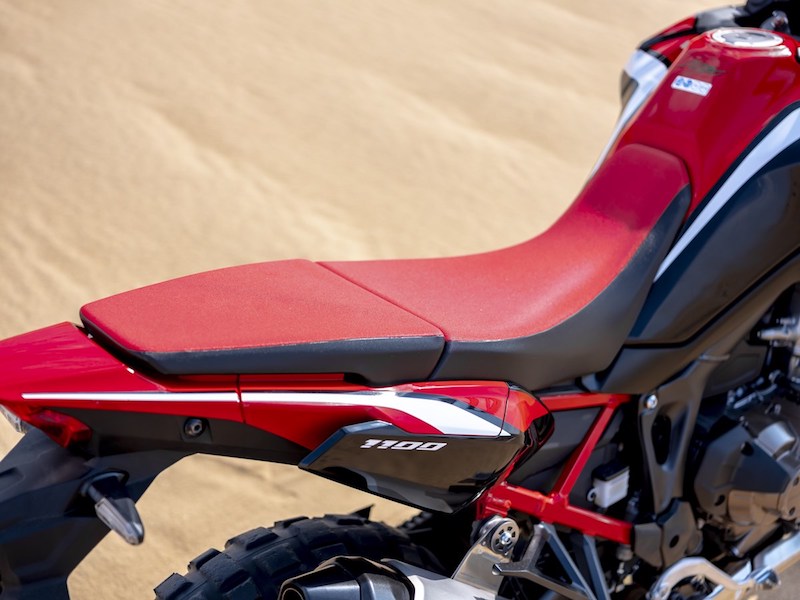 One complaint made about previous Africa Twin models was that they featured a one-piece frame, rather than having a bolted-on sub frame. This meant if you were to crash and twist the frame, there was more chance of the bike being a write off. I know this for a fact because it happened to me just three weeks after buying a brand new Africa Twin Adventure Sports. The bike was indeed a write off.

For 2020, Honda have addressed this by giving the bike a bolted on aluminium sub frame. In fact, Honda says the strength and rigidity of the frame was completely re-examined to provide better performance on and off road. This includes more rigidity at the steering head to provide better feel for front end grip.

Overall, 1.8kg has been shaved off the weight of the frame. 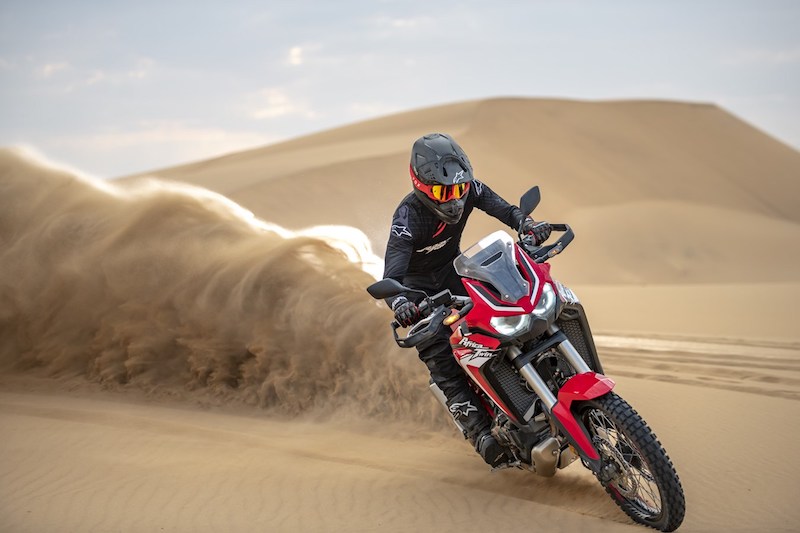 The Africa Twin has trimmed 5kg of fat overall, taking its wet weight down to 226kg. The seat height remains between 850mm and 870mm, although lower and higher seats are available as extras. Ground clearance is unchanged at 250mm.

The tank size remains at 18.8l. The bike rolls on a 21-inch stainless steel spoked front wheel and an 18-inch rear, which use tubes. 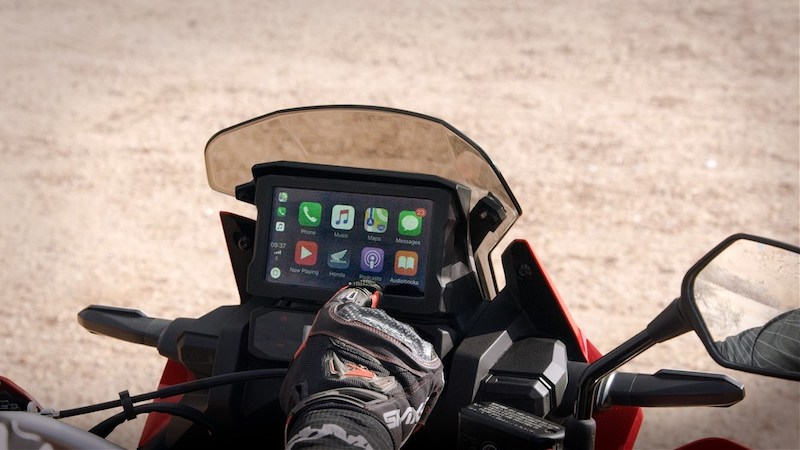 Despite seemingly aiming the Africa Twin at the off-road adventure bike rider, there are plenty of features and creature comforts that suggest it will continue to be a solid touring bike. These include cruise control as standard, a 6.5-inch touchscreen TFT dash (usable with gloves), a USB charging point, Bluetooth connectivity, and Apple CarPlay compatibility.

Hand guards also come a standard as well as daytime running lights that automatically adjust to the ambient light. The LED headlights have been mounted slightly higher than the previous model to improve visibility.

Technological wizardry measures wheel speed to automatically cancel indicators, rather than the often-frustrating method of simply relying on a timer.

The bike also features wheelie control and four levels of traction control, with three levels of engine braking for you to adjust. 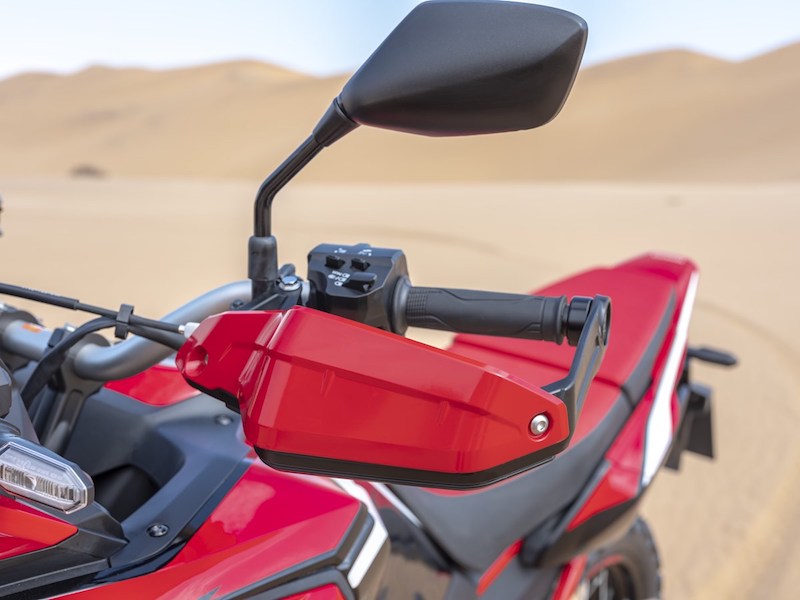 If an automatic motorcycle is your thing, Honda is promising an improved DCT system on the new Africa Twin, including incline detection that adapts gear changes depending on the gradient of the hill you are on.

There is also a new cornering detection feature which recognises the bike is going around a turn and adjusts the gear shift programme for the most natural gear change. 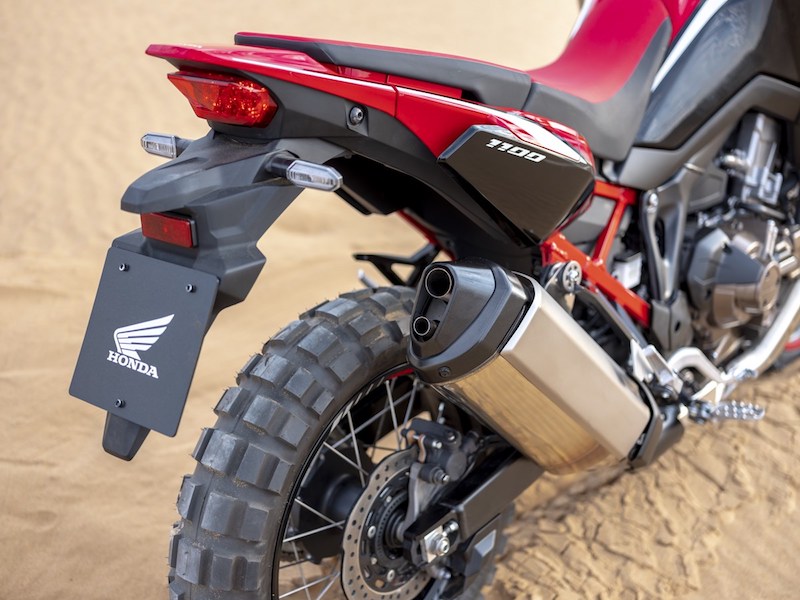 While the Africa Twin Adventure Sports emitted a primal growl that made our hairs stand on end, the standard version sounded a little muted. Honda will address this with the new model by adding a variable exhaust control valve to the muffler to create an improved low-rpm sound, and also increase high-rpm performance. 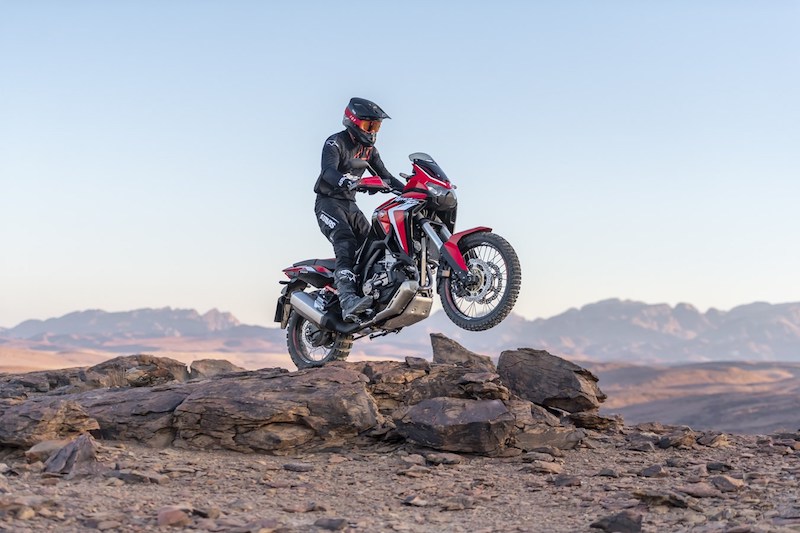 The 2020 Africa Twin features adjustable Showa suspension with 230mm travel at the front and 220mm at the rear.

Many of the changes Honda has made to its Africa Twin line-up are shared across both models, including sharing the same frame, engine, riding position, and technology outlined above. 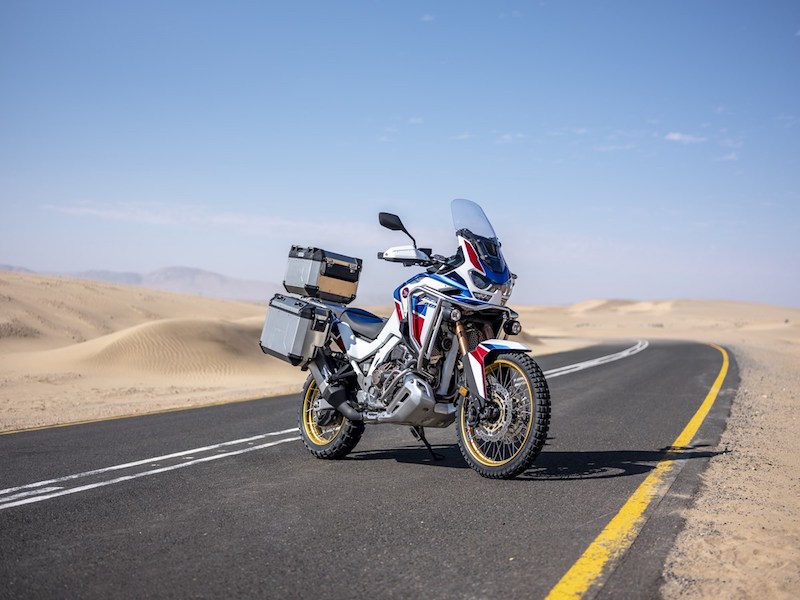 However, it seems Honda are pitching the updated Adventure Sports model more as a long distance tourer, and less of a dirt-focused machine like its smaller sibling.

The Adventure Sports model now gets tubeless tyres (a favourite of road tourers due to the ease of fixing a puncture), a slightly larger 24.8l fuel tank (up from 24.2l) for more miles between stops, a larger adjustable screen for comfort, and a rear carrier rack to mount luggage on. 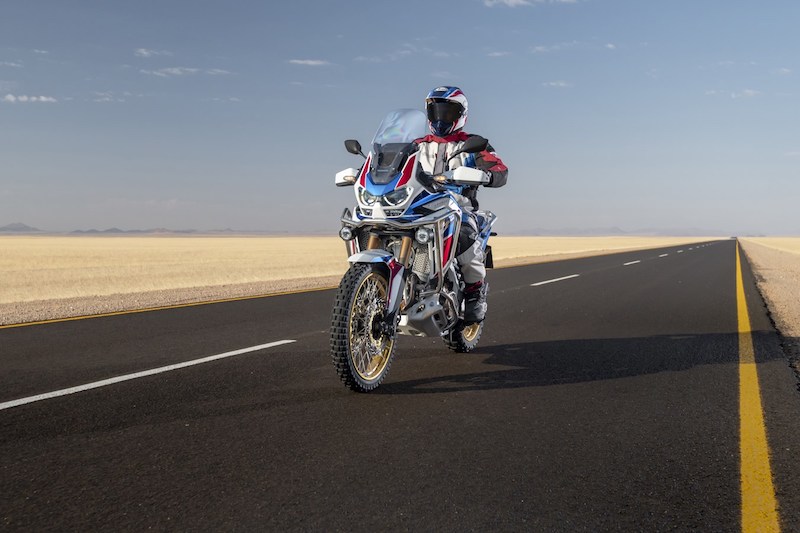 An optional extra is Showa electronically adjustable suspension with five settings, including a User mode to fine tune it to your taste. 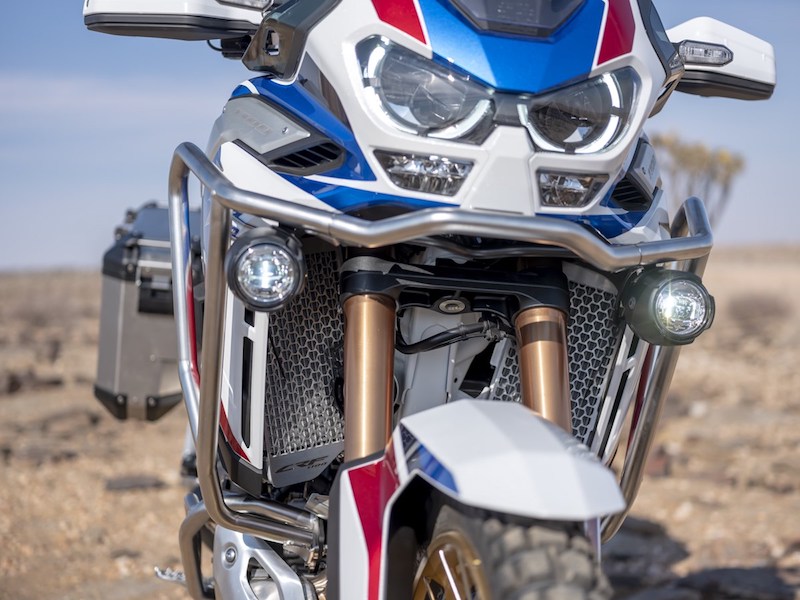 The seat height of Adventure Sports has now been brought into line with the standard model Africa Twin at 850mm to 870mm (down from a whopping 900mm to 920mm). This should make the bike more accessible to riders who were previously put off by the imposing stature of the previous model.

The press launch of the new Honda Africa Twin and the Africa Twin Adventure Sports is due to take place in Sardinia in the coming days and we’ll be there to put it through its paces. You’ll be able to read the full review in the November/December issue of Adventure Bike Rider magazine.