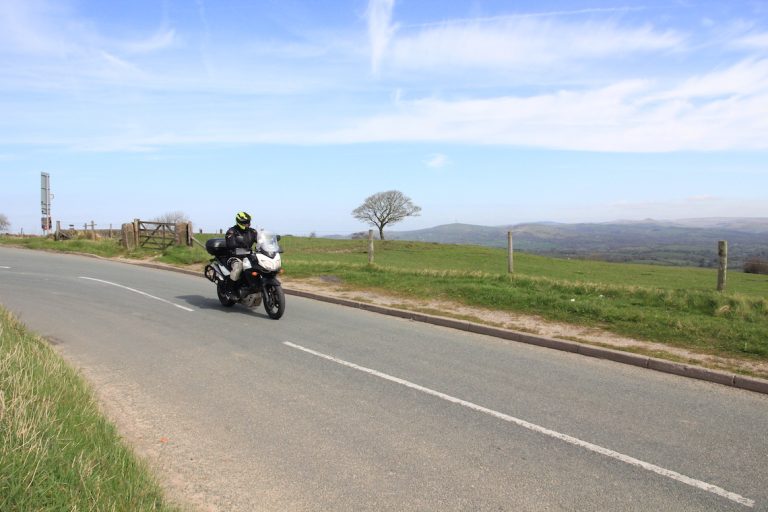 When you think of Britain’s best motorcycling counties, does Staffordshire come to mind? It should, as Bryn Davies found out as he rode the Staffordshire Way

In each issue of Adventure Bike Rider magazine, we set out to map out a route along one of the United Kingdom’s long-distance footpaths, sticking as close to the trail as is legally possible. In the last issue, we followed in the footsteps of William Shakespeare as we rode from Stratford-upon-Avon into the heart of London, and for this instalment we headed to Stoke-on-Trent, to ride the Staffordshire Way. 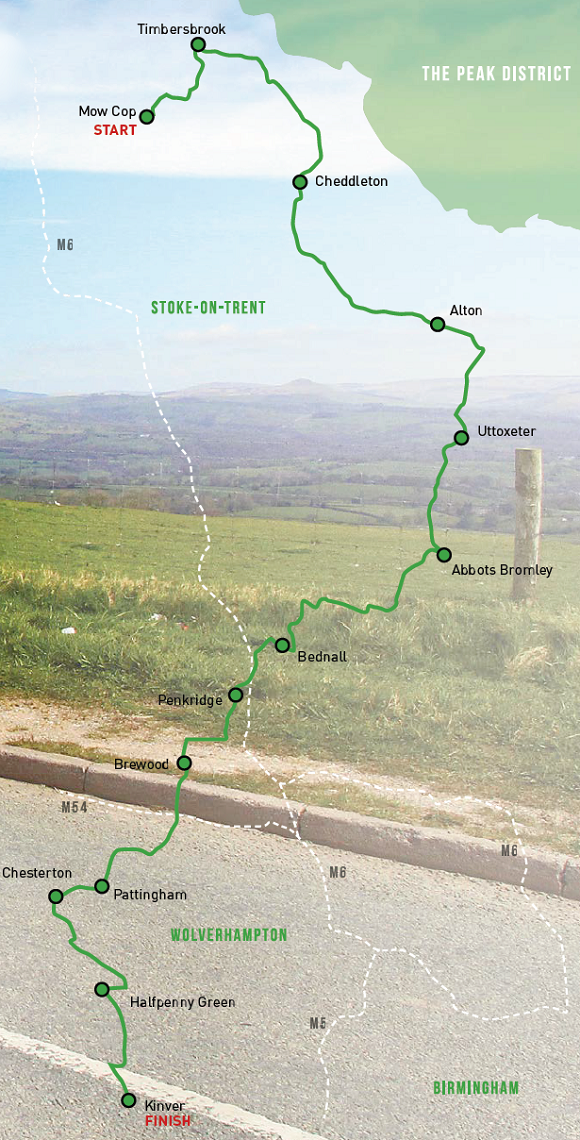 Out of all of the footpaths we’ve followed so far, the Staffordshire Way, which stretches for 95 miles, has, without a doubt, the most interesting and unique start and finish points. At the northern trail head we start our journey under the imposing shadow of Mow Cop Castle, an extraordinary folly on the Staffordshire/Cheshire border.

While in the south we roll into Kinver after a long day of riding at the Holy Austin Rock Houses, a bizarre and astonishing collection of homes that were carved into the sandstone escarpment of Kinver Edge a hundred years or so ago.

We began the day by approaching Mow Cop from Birmingham, heading up the M6 toll (which is surprisingly enjoyable as far as motorways go), and through Stoke-on-Trent and the small town of Kidsgrove. Kidsgrove’s a rather unremarkable area, but it has the distinction of being the birthplace of Reginald Mitchell, the engineer who designed the iconic World War II fighter plane, the Spitfire.

It’s just a few minute’s ride from there to the starting point, Mow Cop Castle which dominates the horizon. Despite the name, it’s not actually a castle, rather a glorified summerhouse that was built in 1754 for Randal Wilbraham, the local Lord of the Manor. Take a few moments to climb up the steps to the ruined structure and admire the county of Staffordshire as it sprawls out in front of you.

From Mow Cop the route takes us in a northerly direction and onto the edge of the beautiful Staffordshire Moorlands. These hills, which sit adjacent to the Peak District, form the southern end of the Pennines and they are delightful to ride through on a sunny day.

What’s better is that it seems no matter which road you take it’ll be an enjoyable ride as you twist and turn and rise and fall with the rolling green hills. I highly recommend you spend some time exploring the area without the shackles of a SatNav guilting you into following the preset route.

Despite the name of the route, after just a few miles we ride through Timbersbrook, a charming little village that sits on the southern edge of Cheshire. As you make your way through lookout for the community library, an old red telephone box that’s been converted into a closet full of books.

From here we effectively double back on ourselves and the Staffordshire Way takes a nosedive in a southerly direction through the historic market town of Leek where, if you ride this route around the summer solstice, you can see a rare natural phenomenon known as a double sunset.

Further south we ride and the roads remain just as enjoyable as we skirt past Alton, home to Alton Towers theme park, and into Uttoxeter which was the birthplace of the global heavy equipment brand, JCB. OK, that’s not reason alone to visit the town, but riding through the place’s streets is an enjoyable experience. Though we don’t linger for long as the next part of the ride is one of the most scenic.

Shortly after Uttoxeter, as we make our way through the lush countryside Blithfield Reservoir bursts into view as you descend a hill. The road takes you along the impressive causeway and towards Cannock Chase, the UK’s smallest Area of Outstanding Natural Beauty.

Despite being located on the outskirts of England’s second city, Birmingham, there’s not a hint of urbanisation around as you meander through the gorgeous woodland. Like the moorlands, I implore you to spend some time enjoying Cannock Chase by picking and choosing different roads on a whim, though I highly recommend you stop by the various war memorials to pay your respects.

A word of caution however, beware of deer running out onto the roads.

Shortly after exiting Cannock we cross over the M6 and navigate the countryside immediately to the west of Birmingham. To me, it’s odd to ride in such glorious surroundings only to pass a road sign that indicates that you’re just a few miles away from Wolverhampton (not that I’ve got anything against Wolverhampton). Enjoy the riding here for we’re coming to the end of our ride.

For the last few miles of the Staffordshire Way, our route takes us along roads that are flanked on both sides by thick woodland. Before long we’re spat out in the large village of Kinver, where you’ll see the sandstone escarpment of Kinver Edge looming.

To ride this far and not see the Holy Austin Stone Houses of Kinver Edge would be a travesty, so follow the brown signs to the outskirts of the village and park up in the roadside carpark.

I have never seen anything like the Holy Austin Stone Houses in the UK before, and they’re truly a sight to behold. The houses, which have been carved out of the soft sandstone, were the last troglodyte dwellings occupied in England, having been lived in until as recently as the 1960s.

After talking to the chaps who work there, it’s said that although humans have been living on Kinver Edge for thousands of years, it was when the iron industry was booming in Kinver that workers who couldn’t afford housing began to carve their own accommodation out of the stone.

If you can make it to the Holy Austin Stone Houses before 4 pm then you’ll be able to take a tour of one of the houses, and see how remarkable the place is. There’s also a tea room situated on the top floor of the houses, which affords views for miles and is a very fitting way to end the ride. From Kinver you’re just a short ride away from the motorways of the Midlands, so you can blast home on the evening.

The Staffordshire Way surprised me with just how fun it was to ride. Having ridden through almost every county in England over the last twelve months, there’s no denying that Staffordshire has areas that are as beautiful, interesting and remarkable as any other place in the UK.

Before our ride, I’d never really paid the county much attention, but having rode through it from north to south, I can only recommend it as a place to explore in the UK. Give it a go, and if you do we’d love to hear from you!