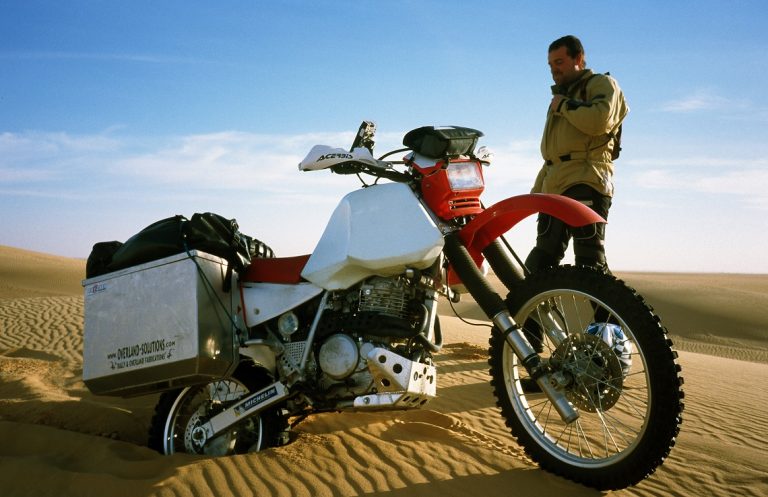 A long trip needs a big fuel range, right? Depends where you’re going: we’ve 80% fewer fuel stations in Britain now than fifty years ago, whereas in the developing world increased car ownership has seen the number of fuel stations mushroom. That’s certainly my experience, and while I value autonomy, I’d say a range of 250 miles (400km) is plenty. On the rare occasions you need more, a temporary solution will do. Above all, a lot of hassle and potential expense can be avoided by choosing a bike that comes with a good range in the first place – either a huge tank or, better still, excellent fuel consumption.

Experienced overlanders will tell you that riding hazards are varied and unpredictable in backcountry Asia and Africa where 60mph is a practical top speed. It just so happens that most bikes ridden at around 55mph will return optimal mpg. Beyond that, aerodynamics come into play; go slower and you’re probably not in top gear at peak torque.

Pootling along on an XT660Z, one night I got 87mpg, and that included crossing the Atlas Mountains. With a CRF250L in Nevada I topped out at 99, and on a CB500X it was 94mpg. These are all staggering figures, mostly down to advances in engine technology, not least EFI. Electronic fuel injection is far more efficient, less fussy and more reliable than a carburettor and continues to improve year by year.

Other ways of saving fuel include running radial road tyres and minimising the frontal profile of your bike. Overtake smoothly, brake moderately and maintain a steady momentum. If you have a choice, avoid the lowest-octane fuel; I’ve found it’s a false economy. When desperate, coast down long descents at tick-over in neutral (while remembering that brakes may overheat). I also mark the throttle position to tell at a glance how wide open it is. Against a headwind or gradient the throttle can creep open; backing off a few mph can save a lot of fuel.

Most of the time we’re balancing convenience against the cost, weight and bulk of carrying extra fuel. Bulk’s a factor on a small bike and weight matters off-road, but with bigger tanks, it pays not to think too hard about added capacity versus cost – you’ll always lose.

If your bike’s lacking, your options are:

In Britain, we’ve long been strapped because aftermarket tanks from Acerbis, Clarke, IMS and Safari are costly. But once you get over that, a replacement tank has the minimum ergonomic impact on your bike. It’s designing a durable roto moulded tank to fit well which costs. Nevertheless, paying 500 quid to gain seven litres is what compels riders to find other solutions.

Before plastic tanks became road legal in Europe it was common to get one made or enlarge the original, very often by simply cutting and welding another tank on top. It didn’t win any design awards, but it got the job done. Alloy is easier to fabricate than steel but doesn’t cope well with vibration, as I found on my XT500 halfway across the Sahara. One good thing about enlarging what you have is that you keep the mounts and, these days, the fuel pump fitting. Just don’t forget the extra weight pressing on those tank mounts.

Failures are common with one-off components as extra stresses, rough terrain and harsh suspension take their toll. All this faffing about with metal is why plastic tanks are such a good idea. They’re immune to vibration fractures, oxidation and denting, and they give a bit, which spares the mounts while being easy to repair with glue.

Remember: huge tanks sit midway, so upgrade the suspension on both ends, not just the front. Underseat tanks on some BMWs and Hondas are hard to enlarge, but as I learned on my XCountry, attaching the fuel-pump vacuum tube created a seamless syphon from something like an auxiliary X Tank (from Hot Road Welding). Range rose to 220 miles with no extra pumps or taps needed, but at quite a cost. Consider a similar arrangement for your under-seat-tanked bike as it’s such an easy job.

This is the cheapest solution: a 5.7-litre can for my 7-litre-tanked KLX250 was just $20 (£14) from Walmart – a lot less than $275 (£190) for an IMS tank gaining 4.2 litres. For £11 Touratech sell two or three-litre cans which mount with a Touratech bracket onto your Touratech box, though I’d say less than three litres isn’t worth it except to stash unleaded fuel for temperamental petrol stoves.

Well-known Rotopax storage cans (most usefully: 3.8, 6.6 and 7.5 litres) mount securely but get pricey with the added hardware. The clever central locating hole also constrains the flat sides from ballooning out as petrol expands due to heat and shaking. That’s why traditional steel jerrycans have that ‘X’ stamped in the sides.

Rotopax may cost 10 times a regular Halfords can, and take up a lot of space for their volume, but that doesn’t stop US riders clamping them all over their adv rigs. Traditional steel jerries are cheap, robust and make good bike stands and seats. On a bike, the 10-litre slim version (from £15) works best.

As well as plastic cans, fuel bags are now legal, from use-once five-litre jobbies to rugged vinyl bladders as big as you like. They take little space until you need them, but, being wobbly blobs, can be hard to secure. Liquid Containment in Australia do 10- or 15-litre ‘touring cans’ for about £60.

Beware Chinese copies, but I’d take one of these over the same capacity in Rotopax. In dire straits, many of us have resorted to plastic Coke bottles found by the roadside.

They’ll burst at the slightest jolt so keep them out of the hot sun and decant as soon as, then chuck them. With all these containers, integrated spouts are handy as long as they don’t leak or get lost. Or, a fold-flat vinyl funnel (£7; Adventure Bike Shop) takes less room than a postcard. Running out of fuel can lead to unscripted adventures and memorable encounters which ‘are the journey’ as Ted Simon observed.

I can’t say I was glad to meet the two creeps who gave me a lift one night in Algeria after my XT ran dry. But I got to town and returned next day at 100mph in a local sheikh’s Range Rover. As we all know, whatever size tank, you’ll run out if you misjudge it or push your luck as I did that night. On most other days you’ll appreciate the convenience and peace of mind on the long ride.

Is a modern 250 really more economical?

Once you load it up and add some mountains, busy traffic and headwinds, a 250 is the smallest practical capacity for adventure riding. Most EFI 250s will return close to 100mpg, but my CRF250L had little left at 60mph (especially at altitude). By comparison, my CB500X easily sustained 70–75mph with power to spare, and peak mpg was within 5% of the 250.

A 500 is largely immune to gradients, headwinds, loads or your impatience; a 250 is not and I bet if I’d run my 500 at ‘250’ speeds, that gap would have narrowed even more. The 250’s benefits are clear: cheaper to buy and insure, and less weight means reduced shipping costs, easier picking up and less intimidating off-road. For a small or off-road-focussed adventure bike rider, it’s a good choice for travelling.