Riding the land of ice and fire 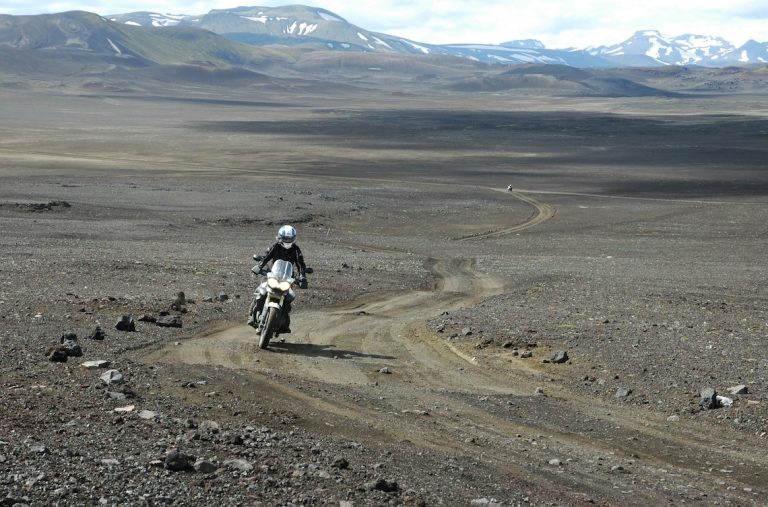 With its spectacular, alien landscape and fantastic riding, Iceland is an adventure biker’s wet dream. John Newman tells us more about riding in a land where volcanoes and glaciers live side by side

We sailed into the mouth of the fjord under a clear sky. When I say ‘sailed’, this was the ferry Norrona that plies between the port of Hirtshals in Northern Denmark and the small port of Seydisfjordur on the east coast of Iceland. When I say we I mean the 1,200 or so passengers on board including a contingent of about 25 motorcyclists, six of whom came aboard at Torshavn in the Faroe Islands where we’d docked for a few hours during the 853 (nautical) miles crossing.

This ferry is the only option if you want to take a vehicle to Iceland. For me, it also meant a long punt across the truck congested roads of northern Europe, before reaching the more peaceful Danish highways. There are no longer any passenger ferries to Denmark from the UK, so the long journey from the French Channel ports or Rotterdam has to be endured – 790 miles from Calais.

Honda had loaned me one of their adventure bikes, the NC750X, ‘automatic’ with their dual-clutch technology, and Pirelli Scorpion tyres with deep cut treads that looked as if they would be able to cope with the gravel roads that take you into the Icelandic hinterland and smaller villages.

Iceland had been on my journey itinerary for some time. The snow-capped volcano and glacier landscape is beautiful, brutal and awe-inspiring; and with a population of just 330,000 people, it’s not going to be crowded. There is only a limited window for motorcycle travel in a country so close to the Arctic Circle, so June it would be, before the majority of car rental tourists arrive. June has limited rainfall and an average temperature of 12 degrees, which is comfortable enough, but this years average took some dives in the ten days I was in the country.

The road miles and a tedious sea voyage are compensated by the arrival. A serene glide across the fjord towards the Seydisfjordur dock between glowering black mountains flecked with snow. We were under blue sky, but in gale force winds, making it almost impossible to stand on deck.

A continuous roaring in my helmet and a constant lean would be the feature of the 186 miles to my first destination, the northern town of Akureyri. The route took me along a section of Iceland’s N1 Ring, a single carriageway surfaced road circling the country for some 875 miles. A handful of other vehicles pass in the opposite direction, and on the high plateau inland, it is cold. One of my cabin companions, a well-travelled German with a functionally kitted 2001 Honda Transalp had dressed in thermal layers before leaving the ship. He’d been here before. Despite the uncomfortable temperature I was entranced by the unfolding scenery. Austere lava fields stretching away into the distance. Mountains and snow, rivers, snowmelt torrents, and steam rising from volcanic vents.

Akureyri sits at the foot of the Trollaskagi Peninsular, one of several poking into the Greenland Sea. At its head in the remote town of Siglufjordur, I’d be as close as I would get to the Arctic Circle. To circulate the peninsular would involve a ride of some 260 kilometres, and although the weather portents were poor at five degrees with low cloud leaking drizzle I rode forth towards the isolated farm settlements, craggy mountains, gushing rivers, and coastal inlets.

The drizzle turned to rain at the first village, Dalvik. I sheltered in a coffee house where a group of workers were taking a break and sustenance from a cauldron of soup. After coffee and radiator glove warming I returned to the narrow surfaced road that hugged the coast. I saw no one.

In the north two small towns have now been linked by two spectacular mountain tunnels. I’d intended to ride the old unsurfaced road across the high tops but low cloud, wet track and unsuitable tyres changed my decision. So after warming up in the town bakery and a fuel refill at the single pump the road led me along the western edge.

Sheep and sturdy Icelandic pony herds grazed the narrow pastures between mountain and sea, and it was not hard to imagine how this cloud-shrouded, rugged land had the ancients weaving sagas of mystery and magic.

Further west in the town of Hvammstangi I was the B&B guest of Siggy and Lillyana for several nights. Tourists with cars passed through, but I’d seen no other motorcycle riders. Until I hit my first gravel road. A BMW/Wasp sidecar outfit that had been on the ferry zipped by while I made a photo stop. The rider waved through the dust, for now, we’d hit a few days of decent weather.

The Honda and I were heading for Holmavik on the western fjords. This was great riding. The fjords, blue and sparkling in the sun, were calm and sublime. The bike performed well; I let it select the gears for me while I focused on the track ahead. Across the rougher sections and through the looser dirt it responded to being steered while standing on the pegs. The NC750X is a lithe and easy machine to handle.

The same road back to my temporary home allowed for pictures I’d missed on the way. It’s incredible how much a dry and relatively warm day can lift the mood. The following day I explored the trail around the stubby Vatnsnes Peninsular, spotting seals and watching acrobatic sea birds skim the water and rocks.

It was a 290-mile ride back to the east coast and the remote hamlet of Brekkuborg. To reach there you leave the surfaced road and tackle a 13-mile trail up to the snow line, before dropping through a series of steep turns back to sea level. The landscape made me gasp. Everywhere waterfalls plunged and splashed down the mountainsides into Mjoifjordur. I had to remind myself to focus on the downhill track. To slide off here would not be good.

The following day, rain hammered the roof of the small hiker’s hostel. My anxiety levels rose at the prospect of riding the trail in the wet, but the weather cleared and then remained dry, and when it was time to leave, astride the bike I revelled in newfound off-road confidence blessing me and the Honda.

Riding in the land of Ice and Fire

it lies on the latitude 65 degrees north, nudging the arctic circle. in June it’s light for twenty-four hours. Probably remembered by most people for the cod War against the UK, the recent banking crisis, and the unpronounceable volcano eruption that shut down European air space. It only became an independent country in 1944, after being ruled by Norway and Denmark.

Although a member of NATO, it has no army and just a small coastguard. Fishing is one of the mainstays of the economy, though tourism is an increasingly important earner, growing at 15% per year. in the capital, Reykjavik, they have heated pavements from their abundant geothermal energy.

If you don’t want to take your own bike and the long ferry journey, motorcycle hire is possible on the island, but expensive. a BMW F650 or 800 costs around €205 per day, and a Suzuki V Strom is quoted at €1,060 for ten days.

Bike Tours UK offer a six-day trip (with four days riding) to Iceland, taking in the best roads and sights that the country has on offer for £1,130 – bike hire, guiding and support vehicle included. For more information visit: www.motorbiketours.org.